It took a few weeks to finally get back down to Boulder and get the airplane. The drive is part of the factor, being that it is 90 minutes each way. Really, what was brewing inside was two things: a fear of the Rockies, and secondly, a nagging wonder where aviation should fit into the equation of life. Living in the high Rockies of Colorado was giving me my altitude fix. Why would I need an airplane to complicate things any further?

I finally found a day where the weather was doable. Well, I guess it was doable. There were ceiling issues, and I can’t remember why I chose this particular day over any other ones. It is not as though there is a shortage of sun in Colorado. Nonetheless, my personal confusion was evident as I had forgotten my camera! Thankfully, I had the iPhone, which I used liberally to take some pictures as I went.

As I applied full throttle in Boulder, I knew things would be sluggish on account of heat as well as my first takeoff at 5,400 feet. Sluggish it was, followed by the glorious “blub blub blub” sound of the engine coughing and sputtering. Rolling down the runway at high speed, I thought to myself “I don’t think this is actually a defect, it must be altitude.” I adjusted mixture controls, leaning the fuel/air ratio manually, and the engine lethargically came to life, enough to get off the ground and climb a bit. I tweaked the mixture a bit at that point, and I got a bit more RPM. It was good enough to climb, so I kept going.

Angling toward the foothills, I made slow but steady progress climbing. It was much slower than I remember flying to 14,000 feet in New York as a student, likely due to heat. At a few points, I just wasn’t making any upward progress, and I looked for locations over the foothills with small, puffy clouds. That is a sign the air is going up. Circling hawks are also a sign of the same thing.

Eventually, I just couldn’t climb. I played with mixture again and got even more power. Imagine that! This “mixture thing” needs to be adjusted with altitude. How fancy.

In time, I got into some cooler high altitude air and the climb rate became predictable and consistent. Reaching 12,800 feet, I aimed for Rollins Pass, a gap in the Front Range at 11,671 feet, with higher terrain on either side. The Rockies were unimaginably beautiful from the air. I completely fell in love with what I saw, a profoundness of scenery that is hard to describe. I cannot get enough of above timberline flying; I don’t care if its summer or winter, warm or cold, it doesn’t end. Life is pure at this altitude, as is the ground, the plants, the earth, all of it.

I was very anxious about going over the pass, anxious about emergency landing options, downdrafts, the clouds looming overhead, erratic wind, pretty much everything. I had been taught that mountains were evil, thanks to such promotional posters hanging in airports as “In 2011, 15 airplanes went into the Colorado Rockies and never came out.” Yeah, thanks. That’s so nice. Here we are, years later, and I have taken to mountain flying like a fish in water. What can I say?

The first thing to say is that flying over the pass was entirely uneventful. I found myself over Winter Park about 6,000 feet above the ground, enjoying the sun, asking myself what the hell I was doing up so high? I descended lower and cruised down the Colorado River valley, getting used to the idea of exacerbated daily thermals and lower aerodynamics at altitude. It took more work to “cruise” in a Cub at such an altitude: more power, more working the throttle, and more manipulation of the flight controls. It is not to say that is was particularly dangerous or hard, it was just different from the normal equilibrium that I was accustomed to. That, and I have almost triple the flying experience now as compared to that day three years ago. That was my first flight in the Rockies with a little, underpowered plane, without experience or information, despite being told not to do it by conventional sources. The little train that could….became a raging locomotive.

I landed at Kremmling, Colorado, a dry hellscape of a place in Grand County. It was the only place I could find hangar space. Wait a minute. Upon arriving, they told me they gave it to someone else, so I’ll just need to park my 70-year-old plane that shouldn’t be outside in the hot Colorado sun. A few months later, I found hangar space in Leadville. I’m still cranky about that one.

Disclaimer: These are unedited iPhone photos!

Foothills of the Rockies. Yes, I am going in there and crossing those mountains.

At 8,000 feet above sea level. Boulder and the Flatirons. 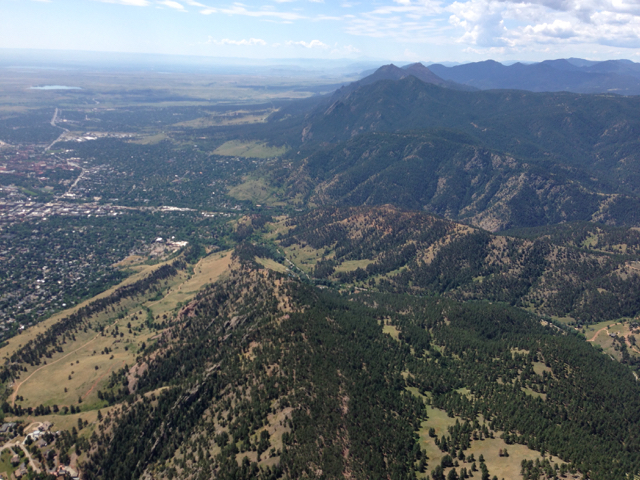 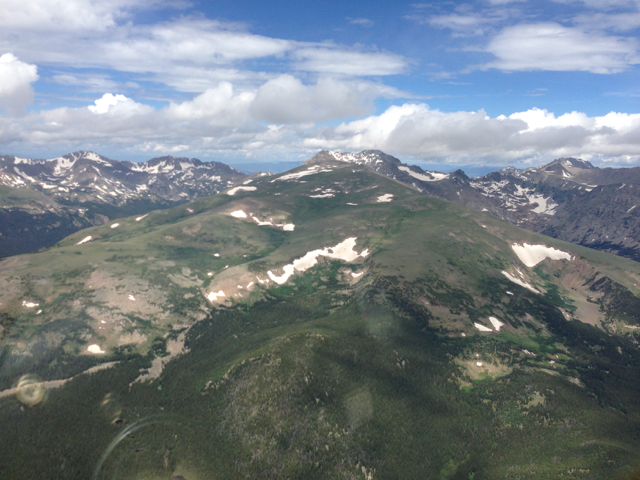 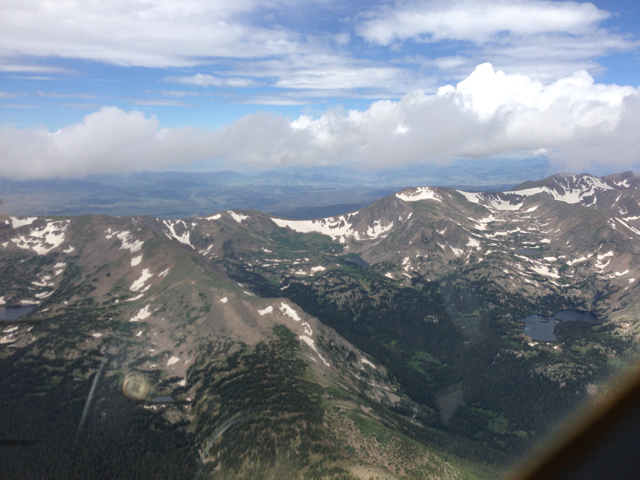 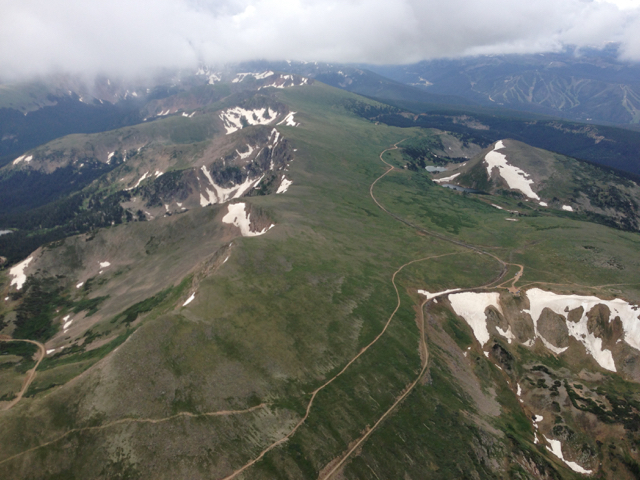 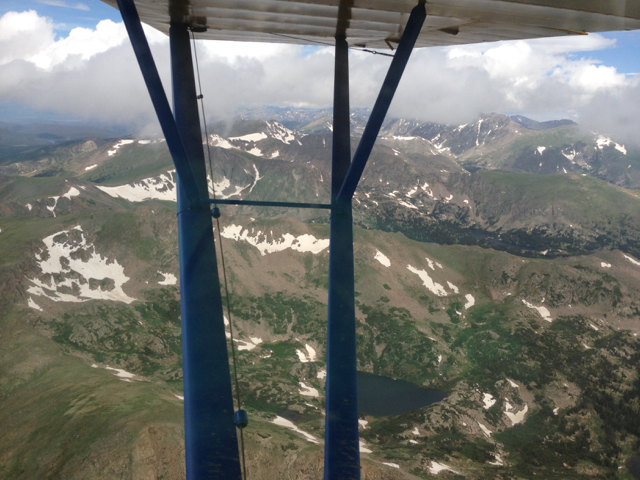 Going down the other side. 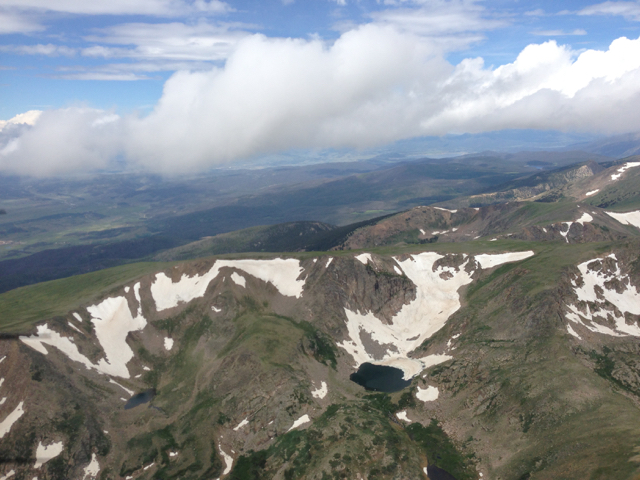 This is turning out to not be a big deal. 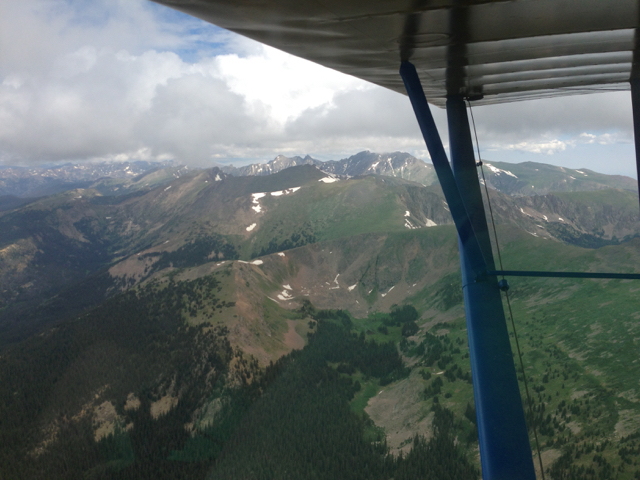 Right base for Kremmling, CO airport. Colorado River below. 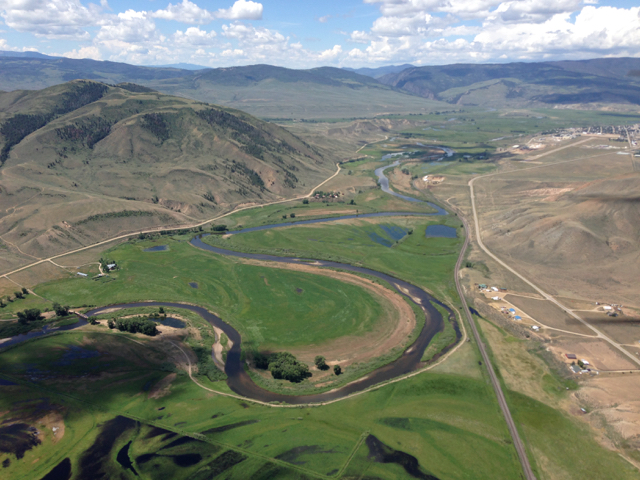