The next morning was a repeat of the prior. Arising after 4AM, I noted 300-foot ceilings per automated readings, with local forecasts indicating that ceilings would rise within the hour. Radar returns showed a gap in the precipitation line, with another mass coming up from the Gulf into Alabama. I drove the car over to the airport, with the permission from fellow stranded pilots the night before.

Three hours later, they arrived in a taxi, and they left in their instrument planes. I sat until 9:30AM, again, and finally said “the hell with it” and took off. The picture was bleak, low cloud with scuds in all directions, with not much in the form of hope. I decided that I wasn’t going to get anywhere sitting on my rear end, so I climbed above the morning cloud layer, came around a bend in the clouds, and voila, a gap. Well, not quite. A gap in the low clouds, with a menacing wall behind it.

Proceeding forward, I decided to out climb the next cloud deck. That turned out to be an exercise in futility, as it was a wall of dark gray. Instead, I dove down, scud running over thick forests in Alabama, following I-20. Risky? Certainly, and…. I was determined.

I had been told by the locals at the West Georgia Regional Airport that the knoll that runs north-south to the west of the airport is the faded tail of the Appalachians, a hill not more than 200 feet tall running along nearly the length of Alabama, and it is littered with airplane wreckage from pilots doing this very thing. Yeah and I’d like to get to Colorado before I die of old age waiting.

Nervous, the terrain descended and clouds slowly ascended a bit. At least I was clear of the graveyard, and two other airports were now in range safely. Continuing northwestward, the ceilings were touching terrain in the more “serious” section of the tail of Appalachia, terrain that resembled the hills of western New York: nothing fancy, but equally as firm when flying into the side of them in the clouds as any other.

Eventually, I had enough instinct to know I’d make it. Half an hour later, that was confirmed, as the sun was beginning to come out. The forecast called for strong thunderstorms later in the day in this area, though it was looking clear enough to get the Sam Hell out of there before things went south. Wait a minute, I am already in the South, and it’s hot as hell. At least my name is not Sam.

Alabama eventually gave way to Mississippi, where I stopped for fuel. It was a blazing inferno outside, and I had to find an older guy lurking somewhere to get fuel going. At takeoff, I noted a cemetery perilously close to the runway. If I hadn’t already given instructions to dump my ashes from a plane, I’d ask to be buried next to a runway, even though the gravesite would eventually be forgotten and paved over with a runway expansion. Fitting, I guess, the cycle of life of a pilot, donating his corpse as a runway foundation.

Continuing northwest, it was evident I was getting away from any thunderstorm chances, and I should be scot-free as it comes to weather. Passing south of Memphis, I had a spiritual moment crossing the flooded Mississippi River. Its not like I was Lewis and Clark, or anything, but for some reason, it feels like it with an old plane, no radio, and just an iPad. Wait a minute, forget the iPad part. You know what I mean.

The eastern Arkansas plain had beautiful farm fields with interesting water channels, awakening me to the idea that agriculture is a work of art from the air, something I had no clue that, in a few years time, I would end up with thousands of photos, including imagery of farms in Germany. Oh the places you’ll go…. Now if I could just get publishers to agree with me on this point.

The Arkansas plain gave way to the Ozarks. With maximum elevation above 2,000 feet, the Ozarks were surprisingly pretty in that they are surrounded by relatively flat terrain, and open to the north and west to the Great Plains. On the other hand, they are thickly forested, remote, lacking cell service, and without good emergency landing options. I couldn’t help but to imagine scenarios where, if I had a forced landing, backwoods locals would be more than happy to help, squeezing me into the back of the pickup in 10 days when they make their run to town. Until then, I would either fall off the face of the earth, be sold into sex slavery, eaten by cannibals, or expire from boredom. The Ozarks are not a paragon of civilization’s achievements, at least not from the air.

The next stop was Pryor, Oklahoma. I made a point to go out of my way to get photos of a slew of data centers for a company in the Netherlands. They ended up not needing the images afterward; however, it was interesting to view horribly expensive pinnacles of modern technology marooned in the middle of nowhere. At least the airport was adjacent to the photo sites.

After fuel, the flight turned more northerly and the afternoon thermals and bumps transitioned to air that was not vertically destabilized. That became typical prairie winds out of the south, affording a blazing cruise speed of 115mph in the Cub. As I flew toward Wichita, Kansas for the night, I made fantastic time as I witnessed the transition from forest to wide-open Midwestern America. It was quite a sight to behold, and a pleasant one with peaceful and fast air.

Arriving at Colonel Jabara Airport, I couldn’t help but be amazed that Wichita crammed six airports near each other, in a city, all with runways facing the same direction. “How does someone make sure they don’t land in the wrong place?” I thought to myself. Six months later, a 747 would land, erroneously, at Jabara Airport, and I would write my first major magazine article for Wired about it, explaining the gory details of how easy the confusion could take place.

One long day with three states knocked off my list that I hadn’t been to yet: Alabama, Mississippi, and Arkansas. I really don’t think I need to return to any of them and in the process, Louisiana, to this day, hangs out alone as one of the 5 US states I haven’t been to. I should have clipped the top of the place while I was so close.

Yes, I will just go over these stupid clouds! 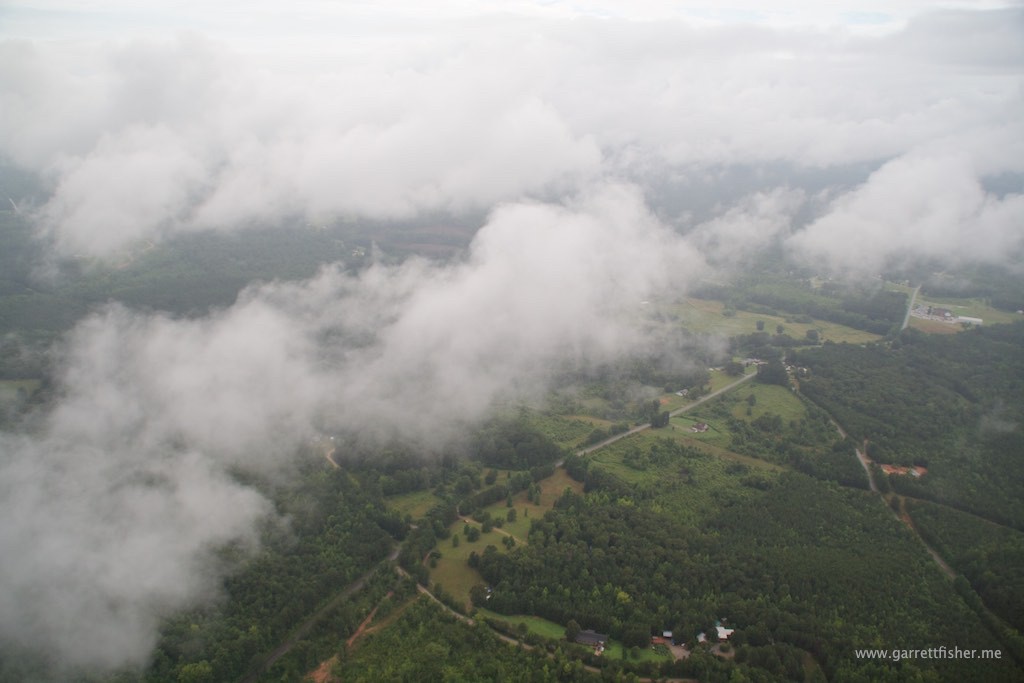 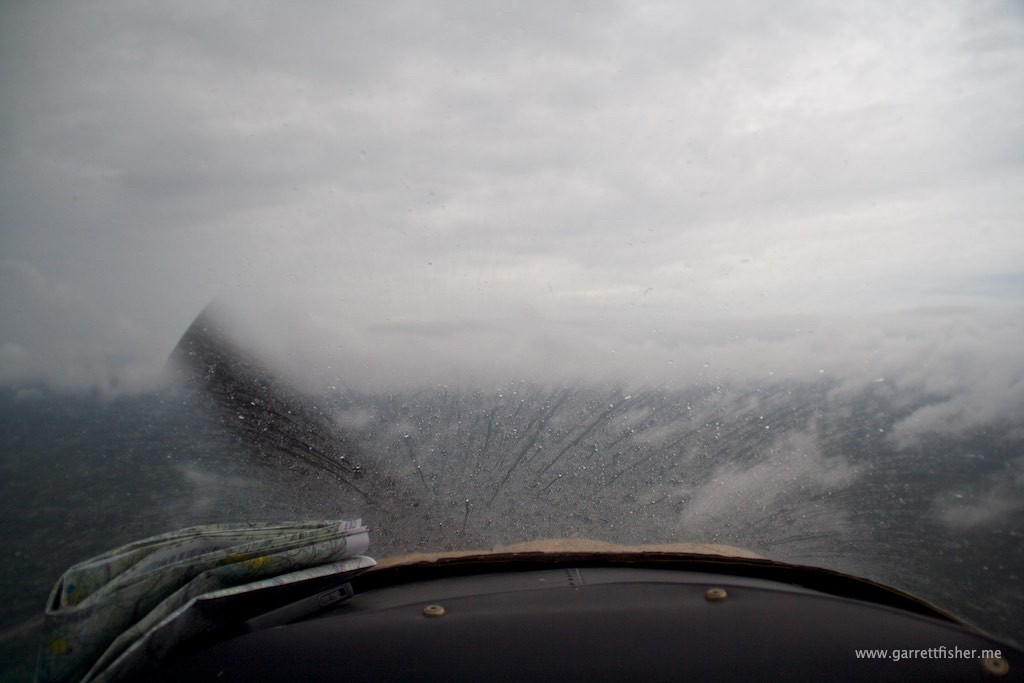 So under them we go…..Damn it, I am getting west of this precipitation line! 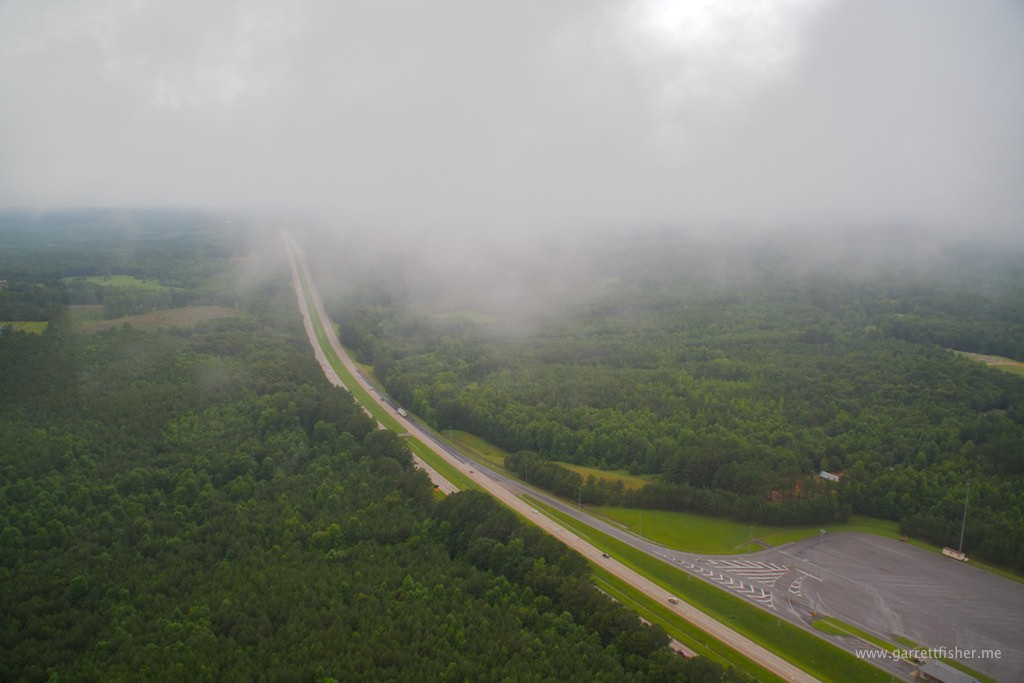 Twenty miles progress and another airport! Worst case, I stay here if I can’t clear those hills. 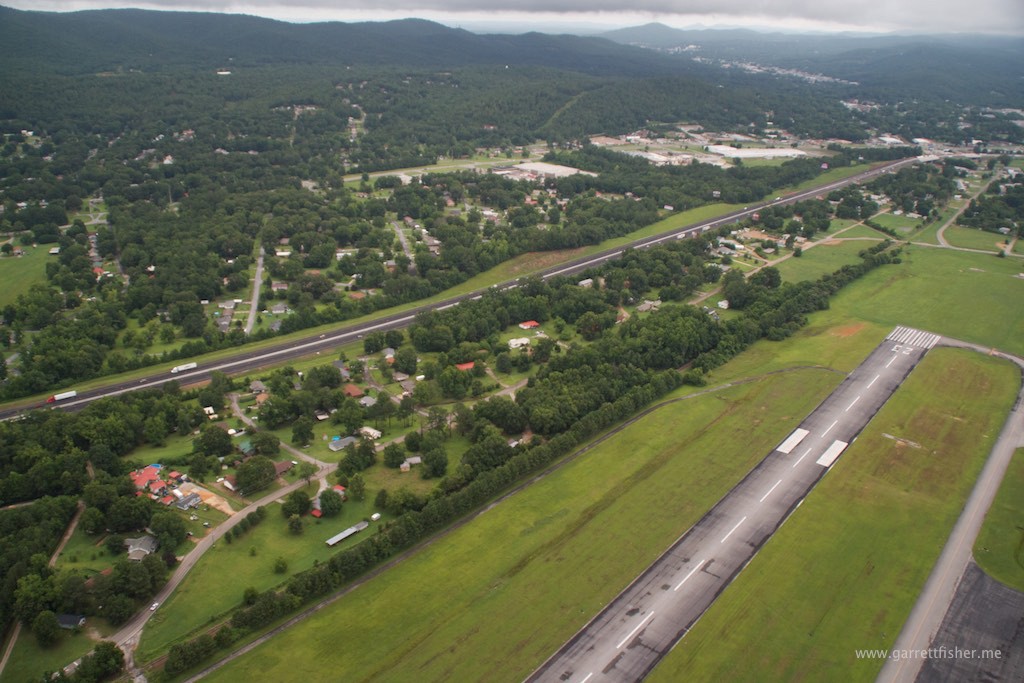 Note the two depressions with no apparent egress for water. I wonder if there are caves. 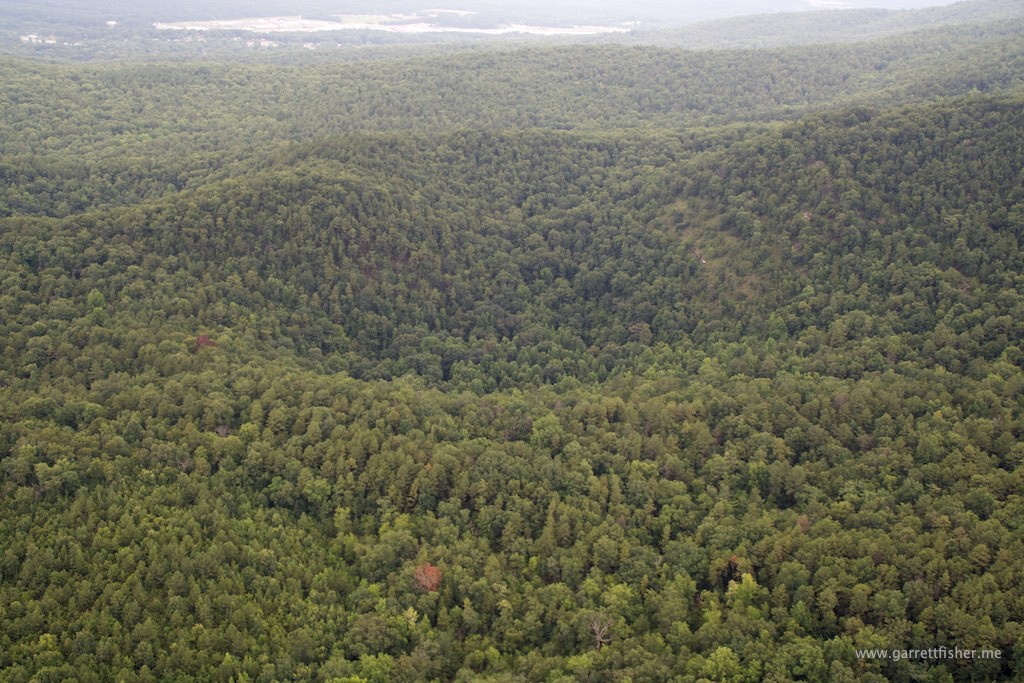 Tail of the Appalachians. These long, short ridges have more influence on Eastern USA weather than anyone could imagine. They start here in Alabama and terminate in Canada. 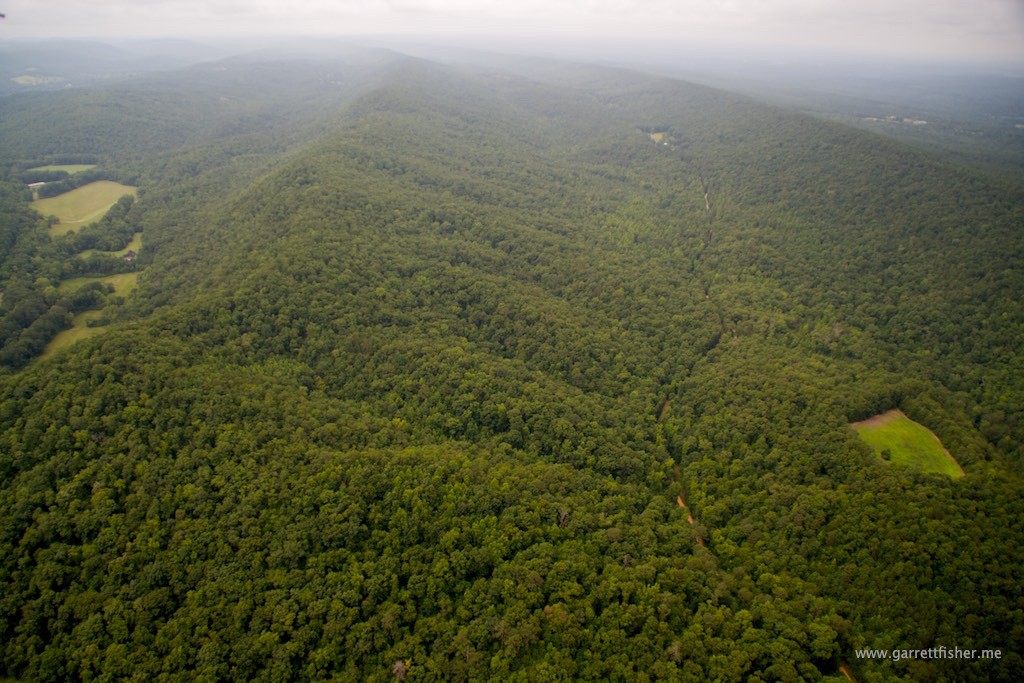 It looks like I am going to escape the clutches of this miserable weather system. 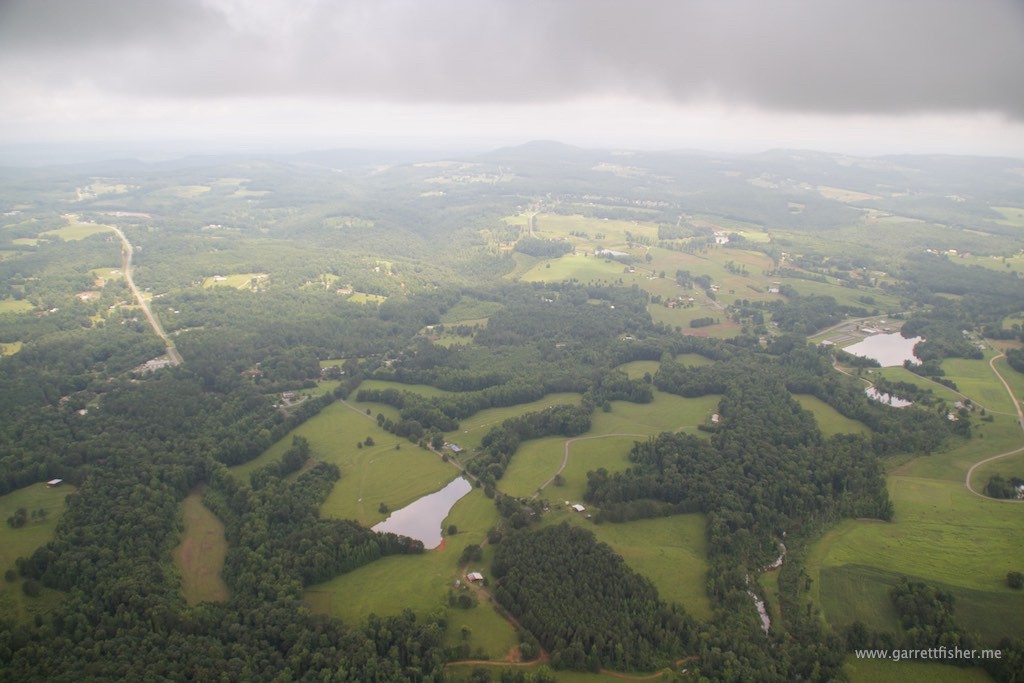 Success!! Now just get the hell out before these pleasant puffy clouds turn into angry thunderstorms. Note how I haven’t figured out how to keep the airplane out of the image yet. So naive three years ago.

VOR navigation station. Pilots think this is cool. Everyone else thinks its just weird. 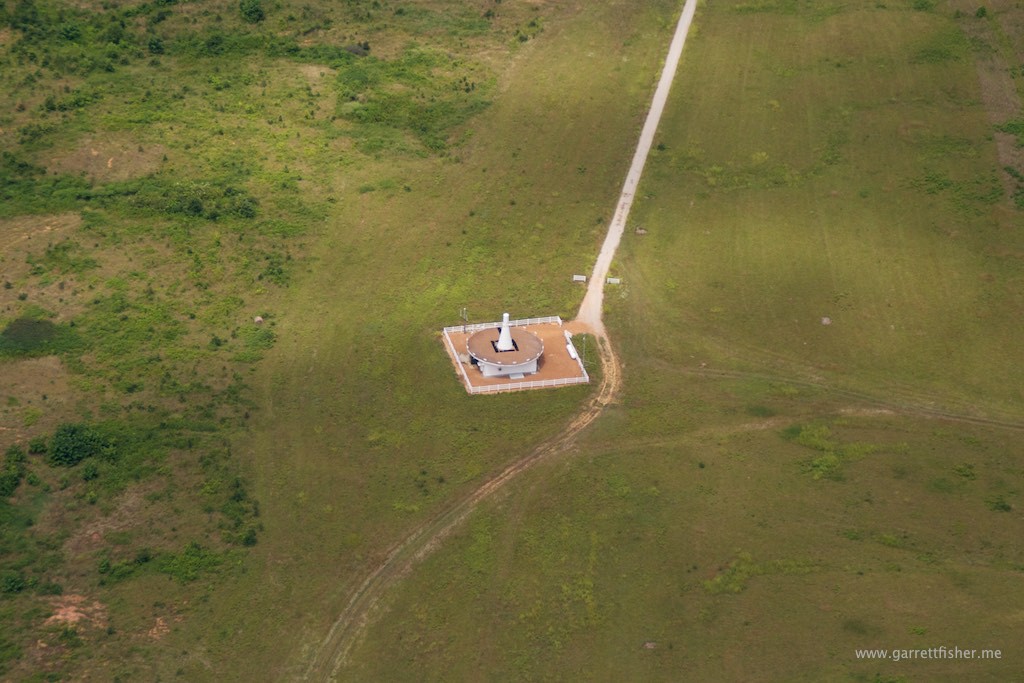 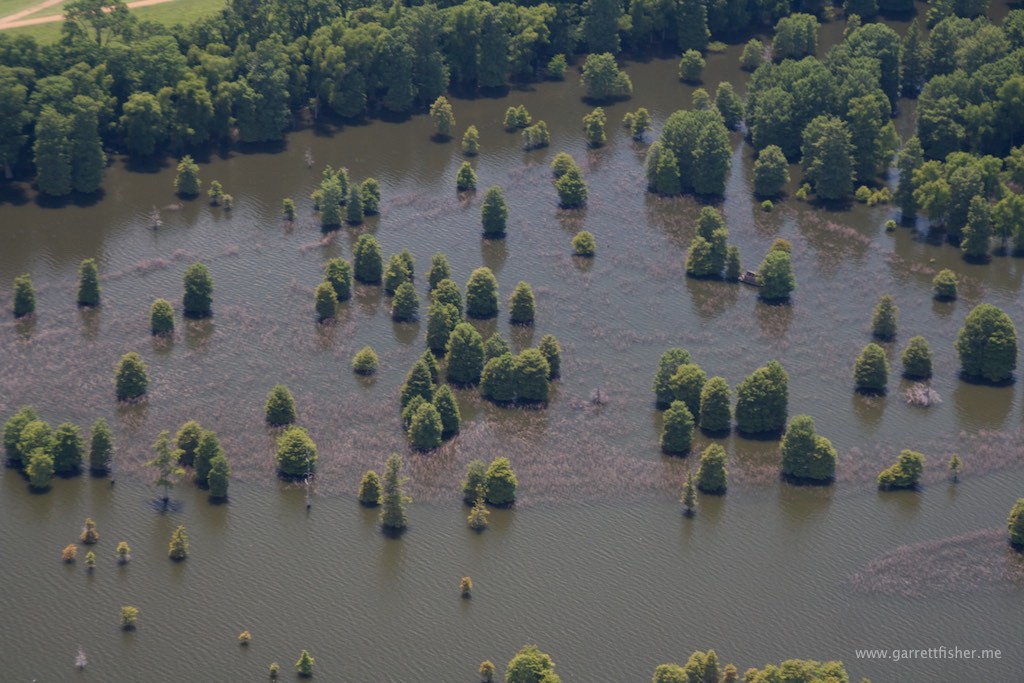 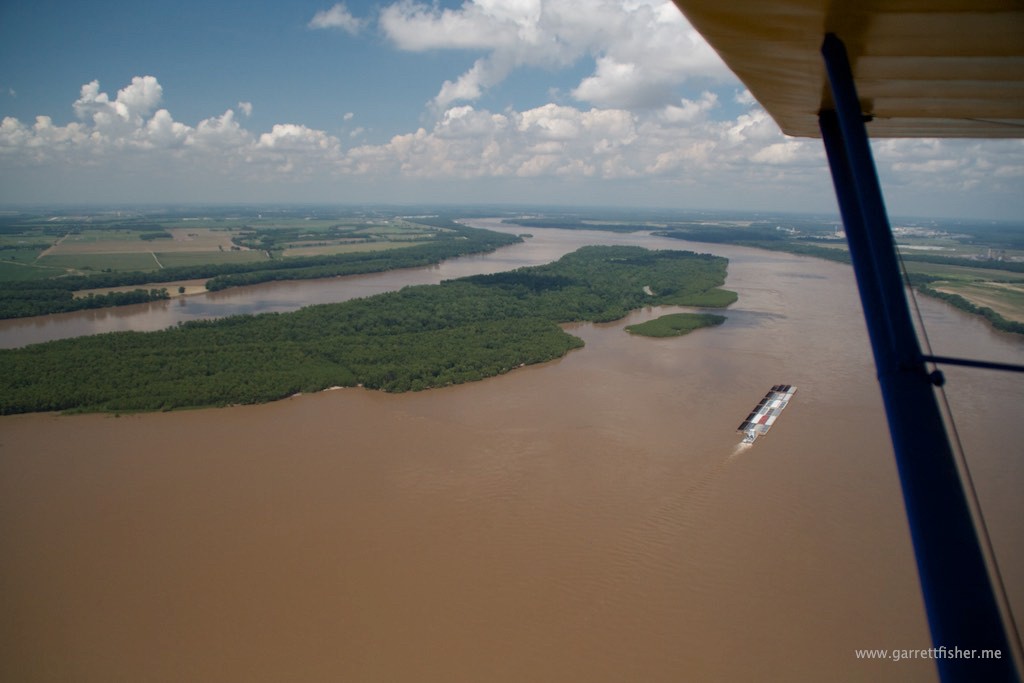 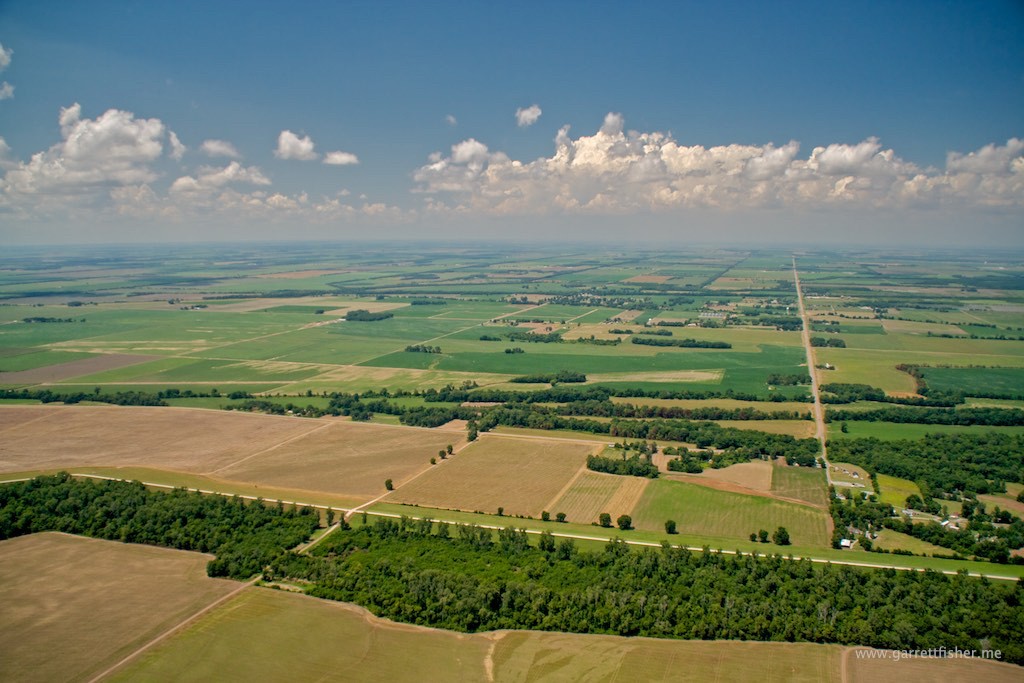 So this farm field thing is pretty. Imagine that, though the publishing industry is still confused about it. 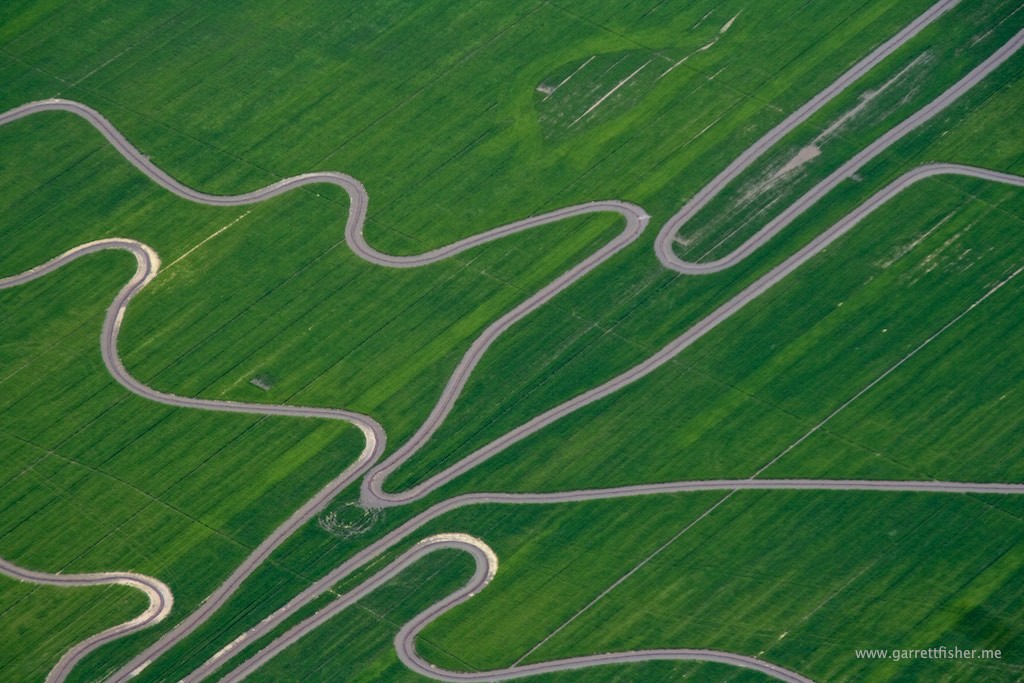 The Ozarks of Arkansas, a land flowing with starvation and death in the event of engine failure. 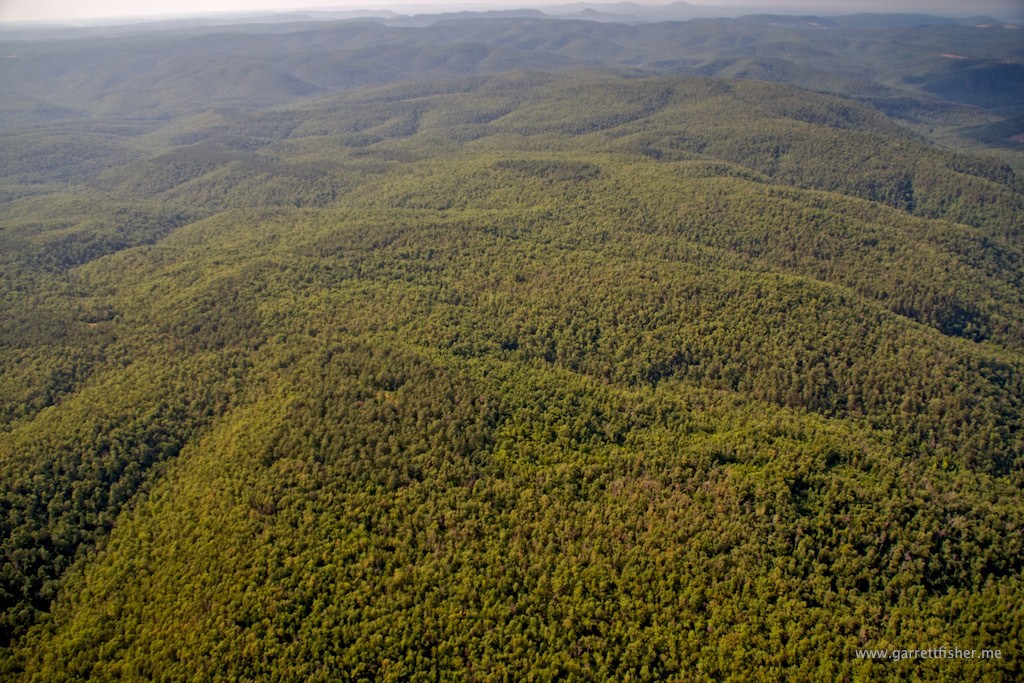 I still can’t understand why someone would dig a body of water like this. Either its for speed boats or a floatplane… 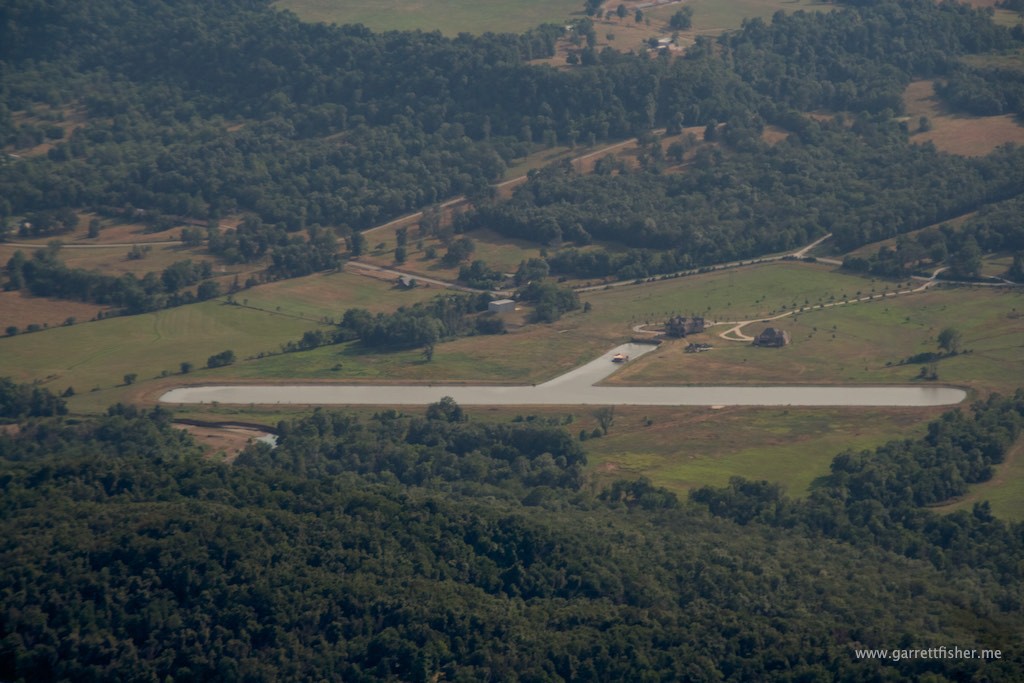 Overflying Class D airspace without a radio. Party like its 1949…. 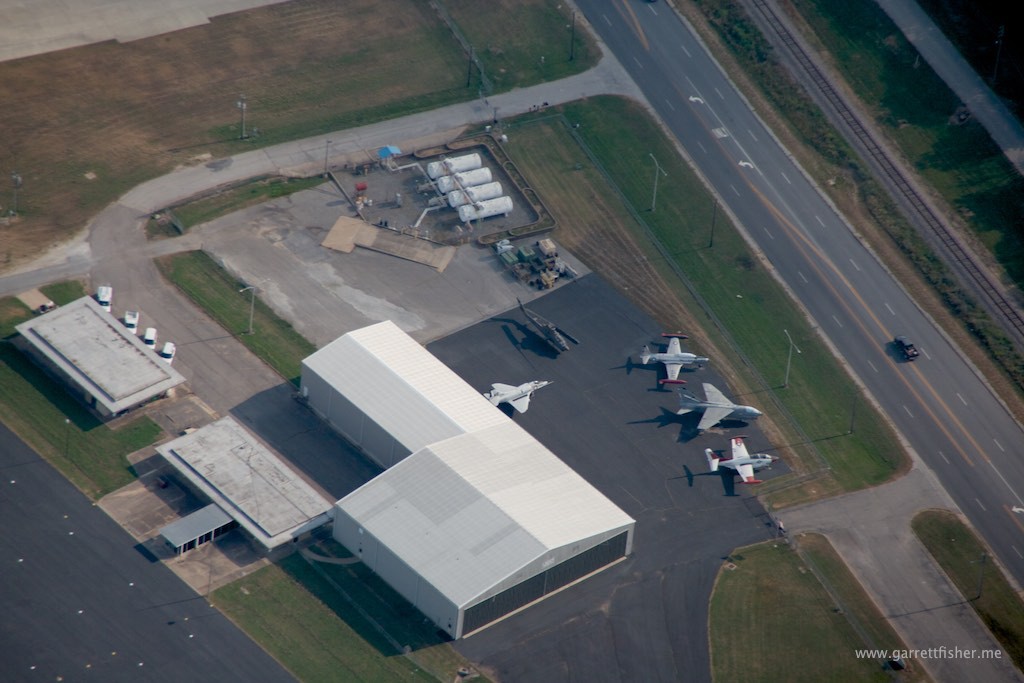 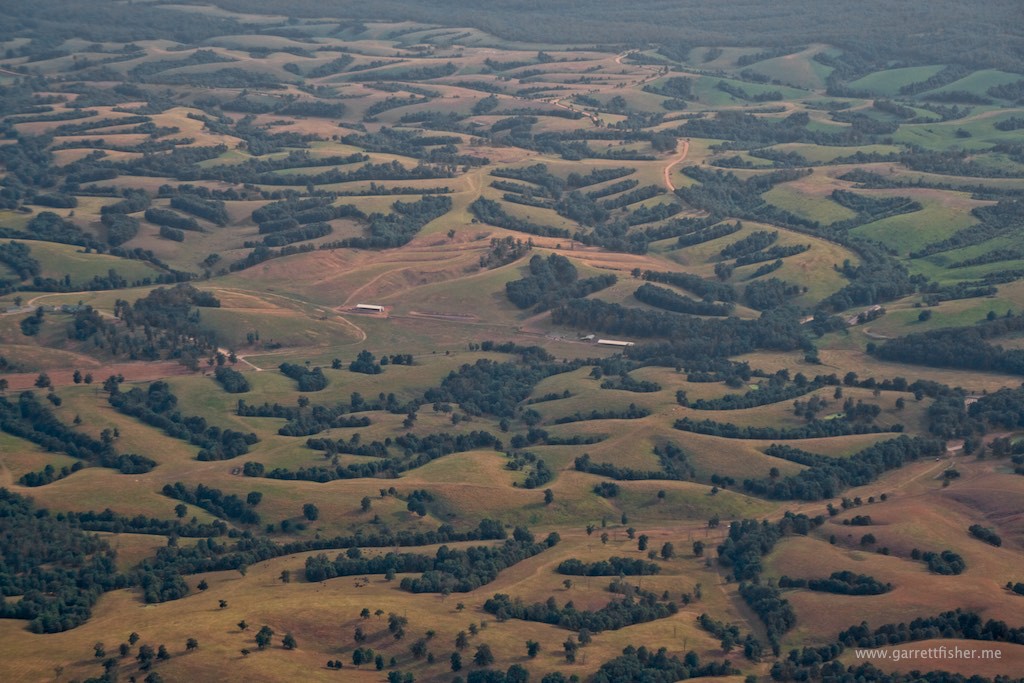 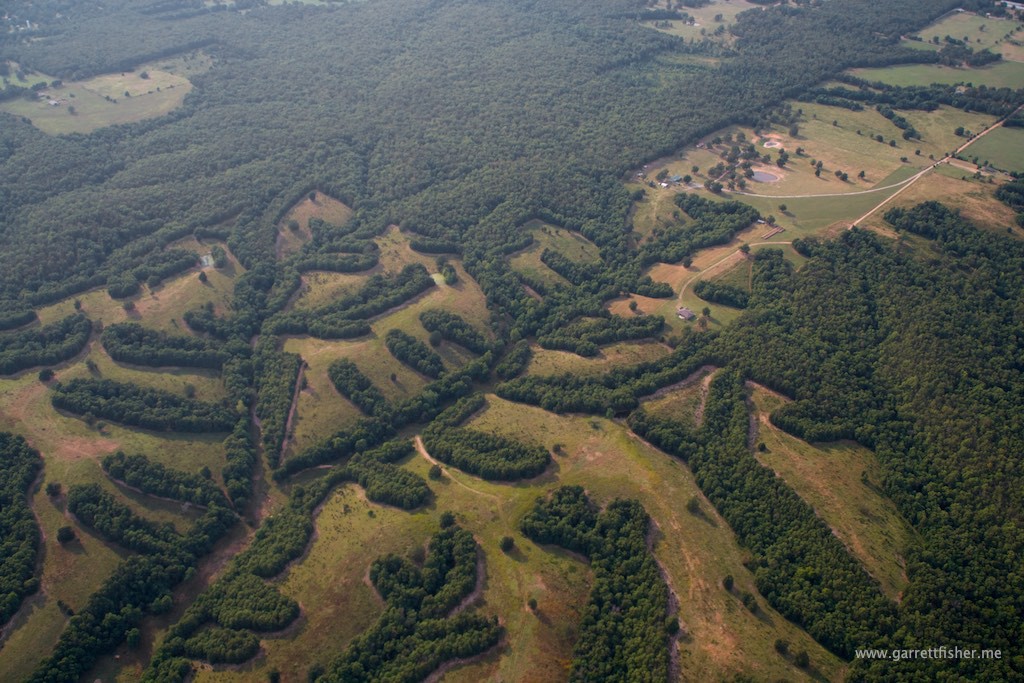 Enigmatic Google data center. Note airport on the right side. 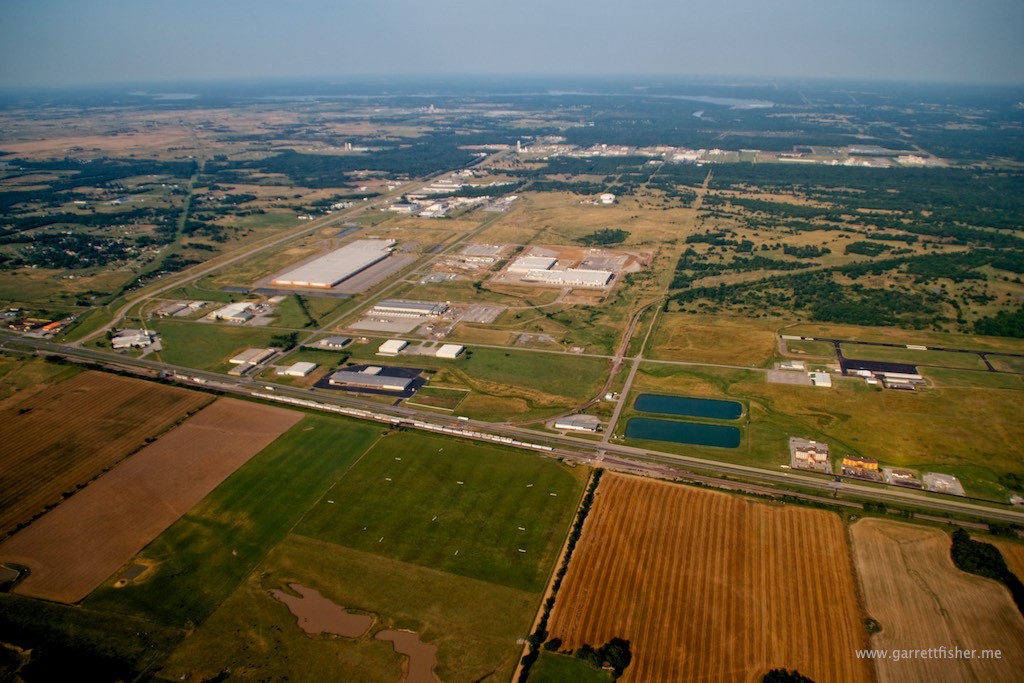 I much prefer this landscape over the eternal boredom of rolling hills in the East filled with trees. 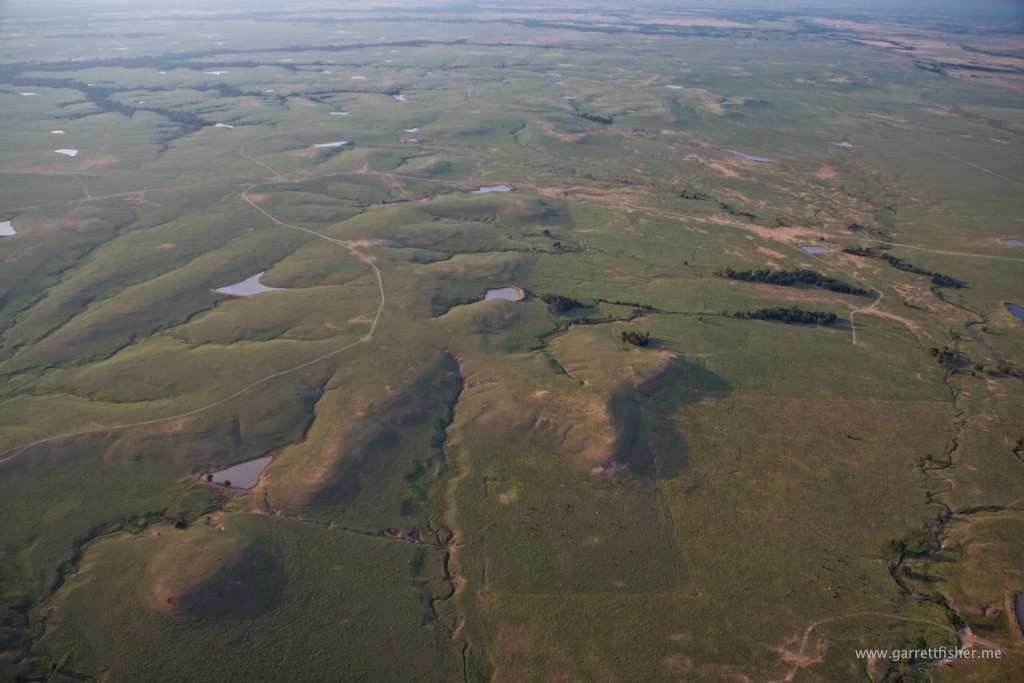 I cannot figure what the hell this is about. A cross on a hill, visible to no one (trust me, there is no one in the surrounding area outside the image), and no road be able to come and venerate the image. Perhaps the intention is to convert trees? I have found crosses in the strangest of places from the airplane. 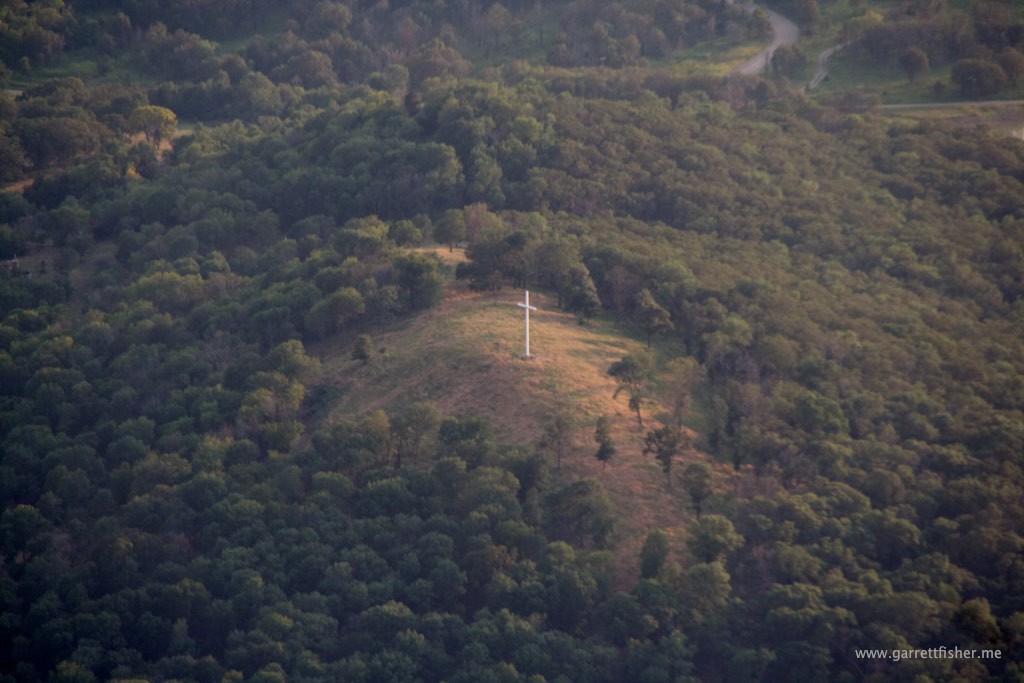 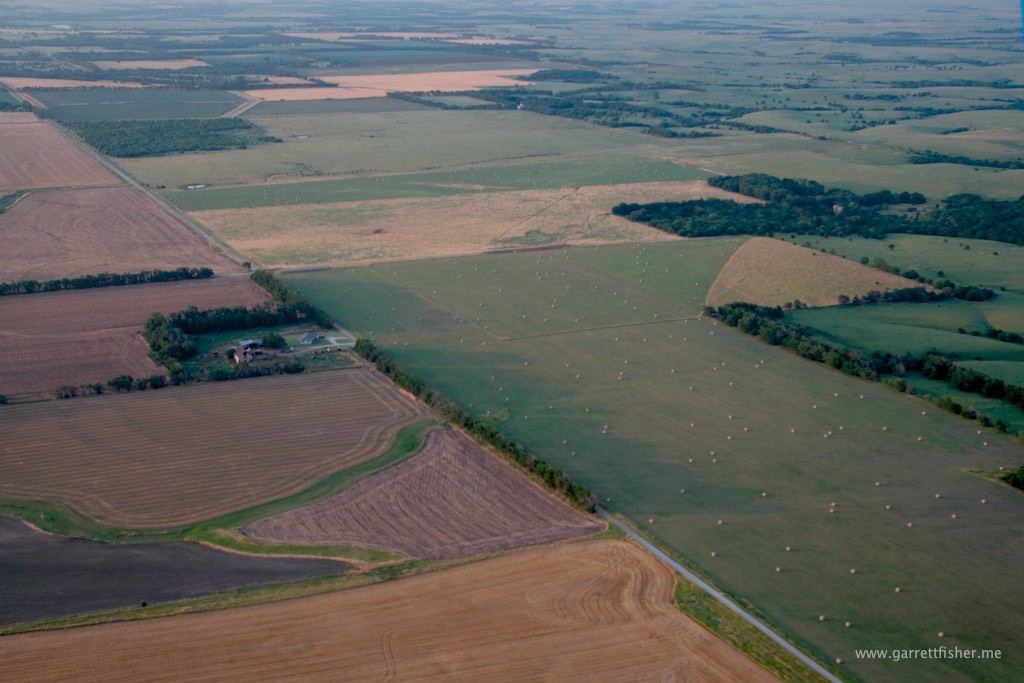 More interesting field behavior. Too dark in the evening to zoom in on the contours. 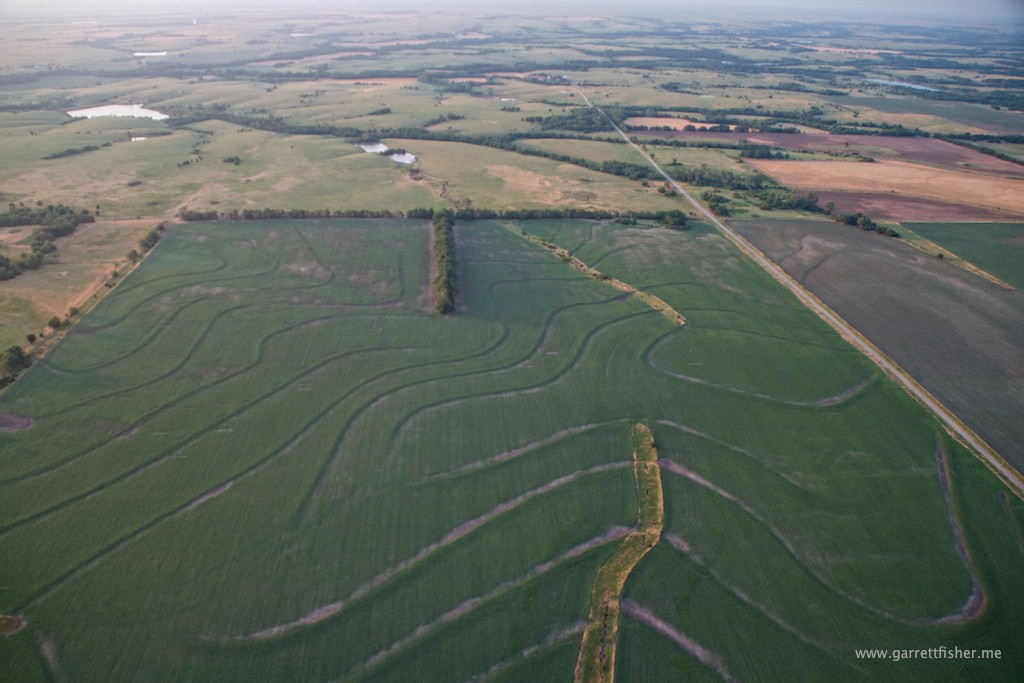