The silly charging problem finally got fixed. Of course, Germany, being one of the most non-religious countries on the planet, has to have a silly tradition that everything closes on Sunday. Thus, I discovered the charging problem on Sunday, and couldn’t even begin sourcing parts until Monday, followed by installation, and then an overnight charge.

The day finally came to see if the airplane would fly, again. The weather looked good enough, though it was nothing picture perfect by any means, and I decided to head over to the airport. I checked every single bolt and wire that was touched in the rigging process, and decided to make a go for it. After standard procedures are followed, information reviewed, a moment of self-reflection to make sure nothing is missed is had, it just comes time to face reality: this is scary as shit and I am either doing it or I am not.

I powered up the engine. First thoughts: “hot damn! I have a starter!” Nervously, I made my first Egelsbach Apron call (not ground). Things are a bit more formal, though once the process is understood, it flies by with the same rapid speed as US control tower interactions, though here it is a “control zone” with an “information” tower, meaning that reporting of activities is mandatory, and the tower provides information services. The tower will not issue orders; it is up to the pilot to make decisions based on information available, though they will gladly record and report any ensuing violations that happen as a result of poor decision making while being watched. Welcome to Germany.

I taxied down to the end of runway 26, ran a very long run up test, stuck my head out the door to completely verify trim stabilizer movements as well as all control surfaces, checked my brand spanking new transponder again, glanced at my brand new switches, and took another look at my sheets of paper sitting in my lap.

That would be correct: I am too much of a cheapskate to purchase Jeppesen’s €349/year Europe iPad app (um, the same thing in the US is $75), spending one euro per day for the plane to possibly sit around not working. I opted for the traditional method of a map and a printout of the facility directory for the airport, even though the pattern touches Frankfurt’s airspace on the north and west sides as well as above the airport. Nothing like going vintage and doing some good old dead reckoning on the test flight after rigging on a new continent in the craziest general aviation airspace in Germany.

The airplane ahead of me took forever and a day to leave, and I finally made my Egelsbach Information radio call, pulling out on Runway 26 and holding for the other aircraft and a helicopter to move, advising that I am adding spacing for a test flight. Eventually, it was time. Just like the J-3, there is a whole lot of soul searching going on at this moment, which is interrupted by me adding full power. Just get it over with. There is nothing more that can be done to make this safer than to park the airplane forever.

This was the first flight with vortex generators at sea level. I was off the ground, without attempting a short field takeoff, in about 100 feet. The airplane climbed like a homesick angel. Initially at 100 feet above the ground, I gave the control surfaces a quick test, and then climbed at 55mph at an absurd angle. Once it sunk in that nothing was broken, it hit me that I am <<expletive, present participle form>> flying in GERMANY with my airplane! Holy shit! The moment didn’t last too long as I was climbing so fast that I was nearly at pattern altitude by the end of the runway, turning south not too long thereafter to follow the exit traffic designations along the A5 autobahn (where I repeatedly do 130mph to and from the airport, eliminating the speed advantage of flying).

Exiting Egelsbach Information at Juliet reporting point, I wandered a bit around the Rhein River plain, turning back toward Darmstadt and into the pattern via Kilo point for a picture perfect landing on runway 26. My routine is to touch down as early as possible, despite displaced thresholds, and I realized at that last moment that this is Germany and I’ll probably get written up for it, so I added power and plopped down a little past the numbers.

I must say, the smile on my face was about as big as the one when I got my pilot’s license 18 years ago.

NW of Darmstadt – Notice how nice and orderly everything is. Forests here, farms there, people somewhere else, everything in straight lines…. 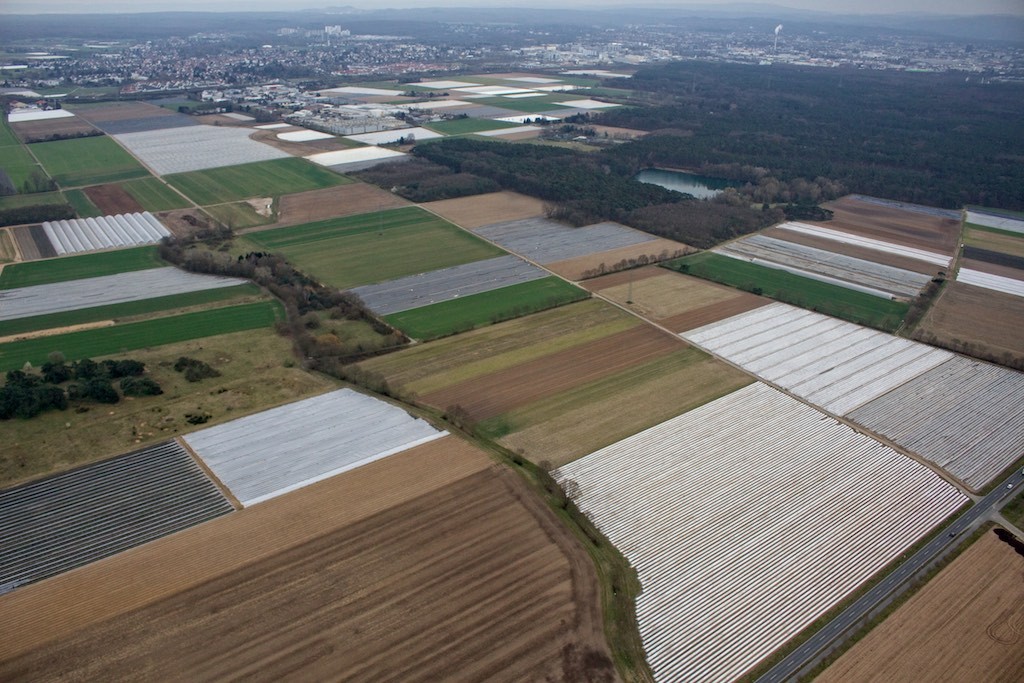 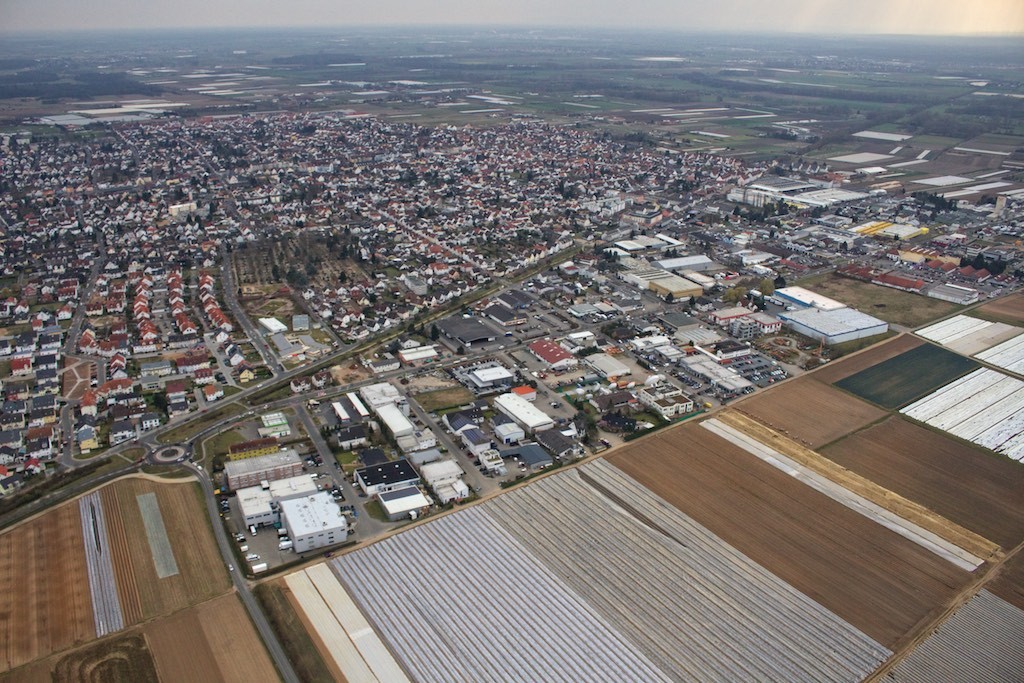 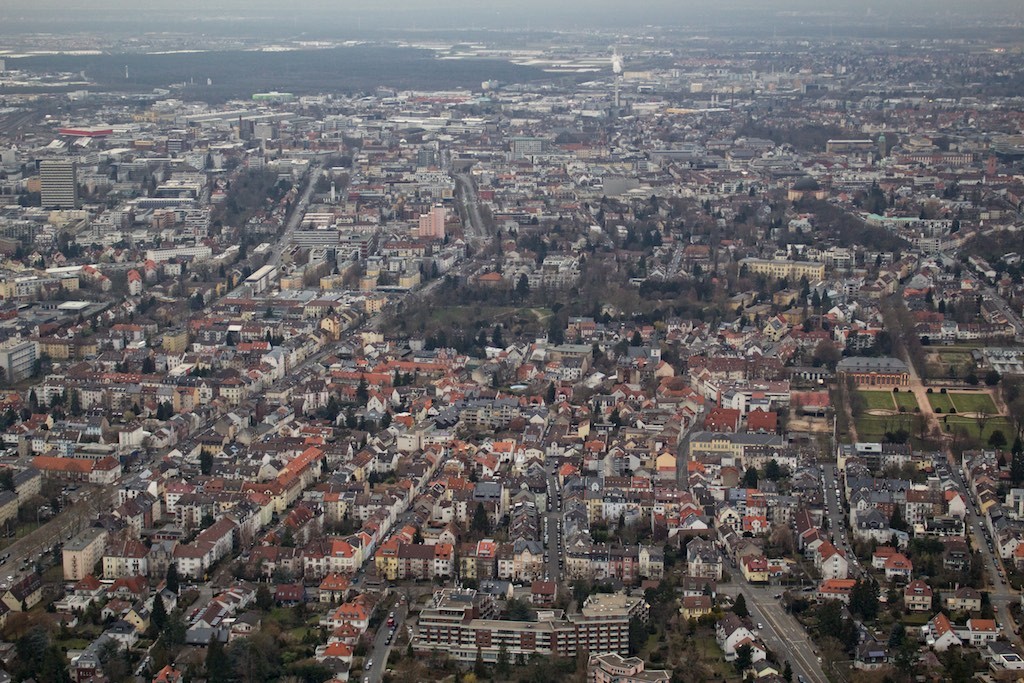 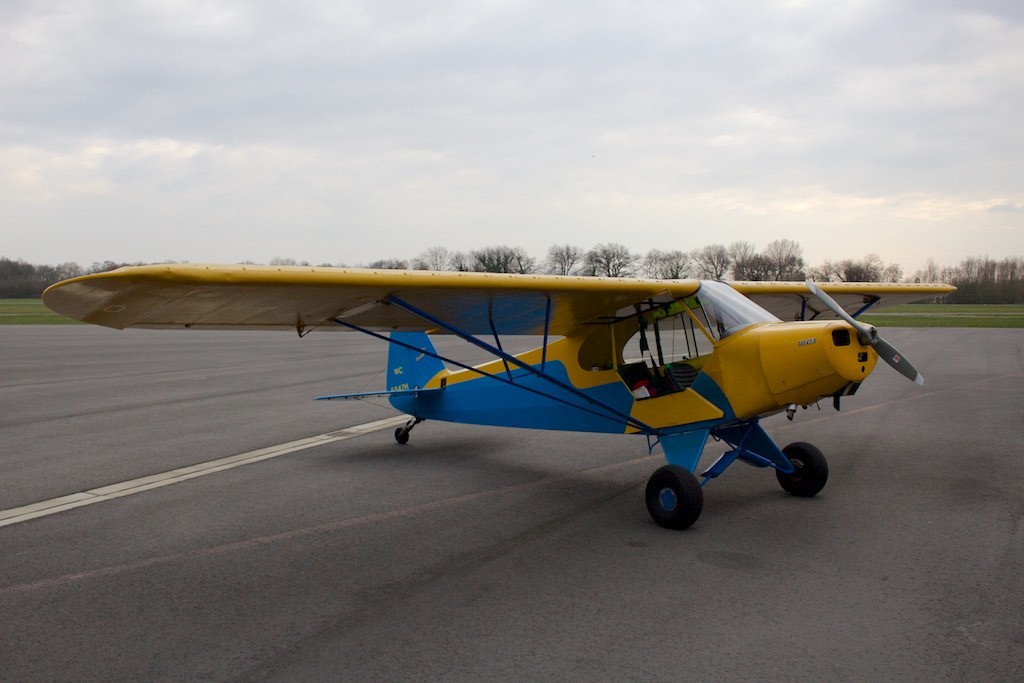