While most who see my work draw a rapid conclusion that I am insane, I must make some bit of a confession. If there is not a place to make a safe emergency landing in proximity to civilization, I really would rather not take the flight. It is even worse than that; I’d rather have it be a location where I can land the airplane with no damage and easily fetch a mechanic to fix it so I can take off again, with cell coverage. Anything else makes me nervous. Thus, I have this eternal battle of deciding between doing nothing and then realizing that I have a book that I can’t publish because it needs photos.

The latest flight into Yellowstone was one of those occasions. I was lacking 3 glaciers in the state of Wyoming for a book (having done all of the other ones), and winter decided to make its presence known at the peaks. That set off a wave of panic, as glaciers really look best without seasonal snowfall, and I was not going to wait 11 months to do the last 5% of a project. As two glaciers border Yellowstone in the Absarokas, I decided to knock out three birds with one stone: the headwaters of the Yellowstone River (not actually in Yellowstone), the glaciers in question, and the rugged terrain of eastern Yellowstone.

I have to admit that I was quite surprised the first time I flew through Yellowstone in 2014. I was expecting crystalline glaciated Western peaks, set against dark blue skies. What I saw was a whole lot of flatness. Now, that is a subject I’ll cover more on another date, and I have come to appreciate what Yellowstone is after some time. However, most of the park is not mountainous, and it has become some bit of a quest to go find every shred of mountain that exists in the park and fly it. The Absarokas take the cake on severity of terrain.

Another interesting facet is putting the pieces together on weather that Yellowstone generates. In prior flights, I have come to notice that the winds at flying altitude pretty much howl out of the west, just about every single time I have flown through, whether the best day possible or a mediocre one. On a separate occasion, I experienced the menacing funnel that exists east of the park, blasting Cody, Wyoming’s airport with ridiculous winds. Today was a chance to see what happens when I combine the two phenomena.

Winds were relatively light, even at altitude, so long as I was east of the Tetons. The moment I crossed into the wide-open areas of Yellowstone to my west, the winds became a fierce howl in the mountains. As I turned toward my intended fueling point in Cody, I passed over the terrain just north of the eastern entrance to the Park, and broke my all time speed record in my little old airplane that cruises at 80mph: 150mph GPS measured ground speed. Winds were 60mph to 70mph at altitude, funneling over the vast plateau of Yellowstone, through the Absarokas and down into Cody. Needless to say, after landing in Cody, it was the only time I feared the airplane getting tipped over while taxiing. To add to the unusualness, winds were calm over in the Bighorns on the same day.

Yellowstone is full of surprises.

Garrett Fisher lives on an airpark in Alpine WY, has published 8 books, and blogs extensively about his flights around Montana, Idaho, and Wyoming at www.garrettfisher.me. He is currently working on two books about Yellowstone from above, the Yellowstone River, glaciers of Wyoming, glaciers of Montana, Grand Teton National Park, and many other projects. 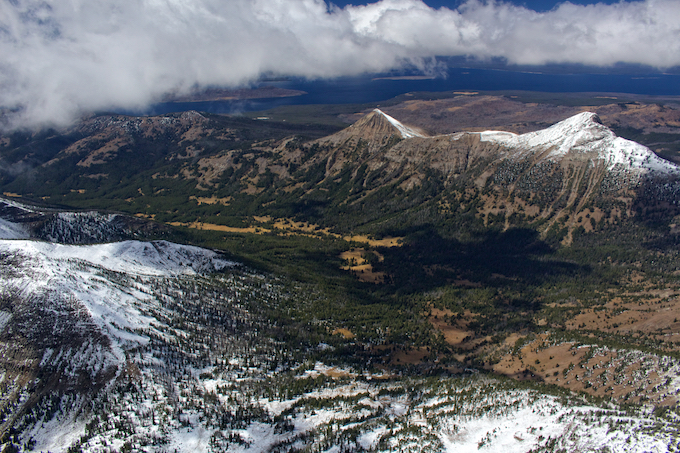 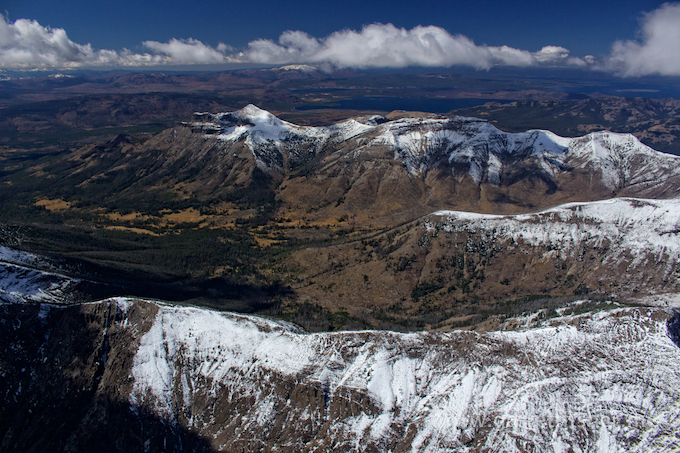