I am extremely proud of this latest release. I had initially planned to do a book on Grand Teton National Park when I came to Wyoming, though I didn’t have an idea of how it would turn out. My first books had a defined list of items, whereas this was a smaller space, and it would be a matter of what I found, and how it looked.

It turns out, I became what I consider to be a ‘real’ mountain flying pilot during the course of this project. Prior to the Tetons, I tended to go up on nicer days and keep some reasonable distance from towering peaks. By the second time I flew over the Tetons, I was getting close. By the third, I found I could wedge myself between clouds, peaks below, and peaks towering into said clouds. Over time, it became possible to add layers of clouds, snaking through holes and popping out in various areas, either sandwiched between layers, or top of the whole thing.

Then came the coup de grace: 35 knot winds with outside air temperatures of minus 30F, with an overcast layer beneath. An image from that flight made the cover of the book. I should be glad I didn’t get frostbite with the door open in temperatures like that! It is also noteworthy that I found that high wind didn’t necessarily mean downdrafts or turbulence: many times it was serene, with placid air despite the wind.

The book covers just about every square inch of the park: its glaciers, mountains, lakes, forests, and everything else. If the three Teton peaks did not exist, the rest of the park would still be considered noteworthy; we simply do not notice it because of the main feature. I spent a lot of time with the airplane in harsh backcountry areas taking photos. 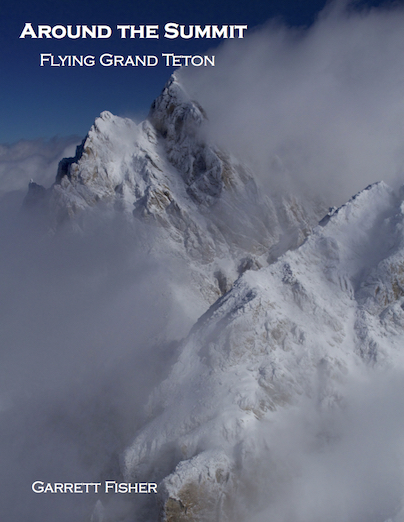