Its sort of mind numbing when one adds up what it takes to move across the ocean. I literally tallied the amount of driving for all matters related to the move (visas, vet appointments for the animals, crossing the country, getting and dropping off borrowed vehicle, selling the truck, sudden trip to Germany, final drive to the airport) and it adds up to stunning one-hundred and forty-two (142!) hours. That’s just the driving to and from multiple places; none of that is the actual appointments, flying time, or other matters. We literally spent the night hearing the sound of the crashing waves of both the Pacific and Atlantic Oceans as part of the machinations of moving in the past few months.

The time flew by quick after arriving in the US. I did have the matter of my visa not having been approved, and after a lovely reminder phone call to the Consulate, I was advised that the Federal Republic of Germany has decided that I am sponge-worthy to live there. Yeah, that only took until a week before we left. My backup plan was literally to arrive on a tourist visa (90 days) if they said no, appeal until I am blue in the face, and if they tell me to buzz off, simultaneously apply to the French, Swiss, Austrian, and Italian embassies and move to whichever country approved me first. Thankfully, that is not an issue. Why I didn’t throw Spain in there, when I speak Spanish fluently, makes no sense. I must have a masochistic fetish for linguistic ignorance.

We bought two more suitcases, threw out stuff, gave stuff away, gave more stuff away, and then shoved it all in. Then, on the day before, while visiting relatives, we realized that there is a weight limit of 51.2 pounds per suitcase. After three hours of arguing and merry go rounds, we re-arranged 60% of it and gave away an additional 2% to squeeze each suitcase in at roughly 51 pounds, according to my wife’s aunt’s bathroom scale.

On the day of our departure, I was walking the dog in the morning in Delaware, saw a bald eagle soaring in the bright blue sky, and couldn’t help but be stirred at this symbol of Americana, though it lasted about 1.36 seconds until I was posed with the philosophical debate of wondering if it was representative of the spirit of America, or the watchful eye of the NSA.

Leaving the country is a strange feeling. I had a sense of foreboding and excitement at the same time, though I really think that was more having to do with dragging 4 suitcases to the checkout desk (204.8 pounds, to be exact), getting the cat and arthritic dog through security, walking through the airport, getting on the plane, getting situated, and then dealing with an 8 hour flight, for which we would then have to walk a mile in the Frankfurt airport, fetch all 4 suitcases, get all of it plus the animals through customs, walk another half mile, shove it all in the as-yet-unknown rental car, and drive somewhere while jetlagged and operating on zero sleep.

There is the matter of leaving the land of one’s birth. I had done it once before when I was 18, the product of an absolutely poorly thought out impulse to go to Ecuador for three months during a revolution (either an act of profound exploration and self-preservation, or literally a moment of religious insanity), something that turned out to be one of the best decisions that I have ever made. I had two suitcases then, and wasn’t actually “moving” (though I should have just stayed there, live and learn). That particular trip had some dramatic homesickness that solved itself instantly the moment I spoke to family again in the US, so I knew that issues of longing and loss wouldn’t be apparent here. Any “connections” or “roots” that I have left are in the English language, the people that pay me, the current place I receive my mail, some friends of which I live in geographic proximity to none of them, and the warm loving embrace of the most recent state DMV that issued my license. Being as migratory as I have been, it’s pretty tough to connect to much of anything for any length of time. This step would be putting an ocean between what I last knew and the present, and I really don’t think that’s all that big of a deal.

Needless to say, we lived through it and nothing terribly bad went wrong, though we had some close calls with timing and logistics in a few places in the flight process. When we finally did sit down in the seats on the Lufthansa flight, the door closed, and they started backing away, it was a good feeling that we had finally made it. No matter what happens (barring mechanical or medical emergency), the flight was going to Germany, and whatever went wrong would have to be dealt with without aborting the whole thing. Finally, after 6 months of wrangling, logistics, head splitting problem solving, and sometimes utter hell, we were on the plane and it was moving.

The dog didn’t move once for the entire flight, and he was not drugged. The cat, drugged to the hilt and previously the best traveling feline ever, went through cyclical meltdowns, though he was enamored with being toted through Frankfurt airport in a sea of foreigners and bustle. It was the jet engine noise; he didn’t like it, and he was going to punish us over it and that was that.

Upon arrival into our new home, we discovered that the landlord turned the heat down in an act of thrift, which meant that the stone house had cooled to 45 degrees, and it was not going to warm up for days due to Germanic obsession with borderline non-functional efficiency. We had no wood for the stove, were operating on rage and 53 remaining IQ points (split between the two of us), and finally gave up and slept on the mattress on the floor in a pile of blankets, missing the alarm and oversleeping during the middle of the day. My wife aptly noted: “This is a concentration camp.”

In a moment of political correctness, I found it necessary to advise her that it was not, in fact, a concentration camp. Fifteen hours later, when I was a complete zombie and unable to sleep in a freezing cold house at three in the morning, I decided to take a shower. The hot water did not work (something I now understand to be a result of German hot water systems: they shut off at night). I said to myself, as I stood in cold water in the middle of the night in a cold house while pissy, cross-eyed and partially delusional: “This is a concentration camp.”

While using such a glorious ending as a literary device would be compelling, the bulk of readers would draw the conclusion that we don’t like Germany. That is certainly not the case! It’s sort of an obvious conclusion that we like it, because we fought for six months to come here. I keep falling back on the quote I have on the front page of the site: “Naiveté is the mother of adventure.” It is all of the silly innocence, optimism, and blind ambition that cause all of this mindless disruption in life, and it also makes a good story, wrapped around the existentialism of this whole affair being a wild journey.

Just before the drive to Washington-Dulles Airport. They both look a bit more optimistic this time. 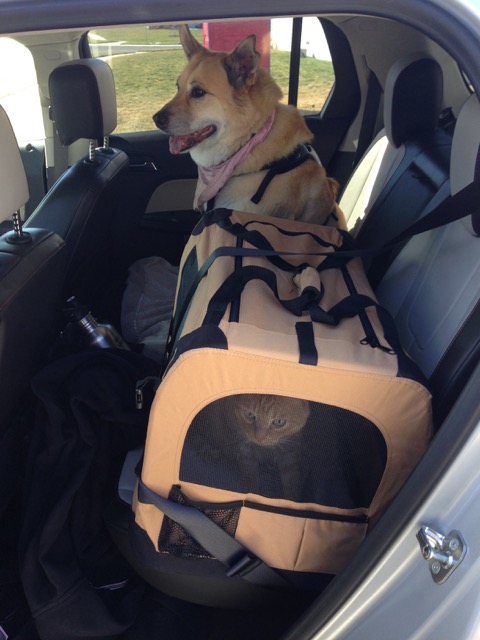 8 hours in that position with a very pissy kitty. 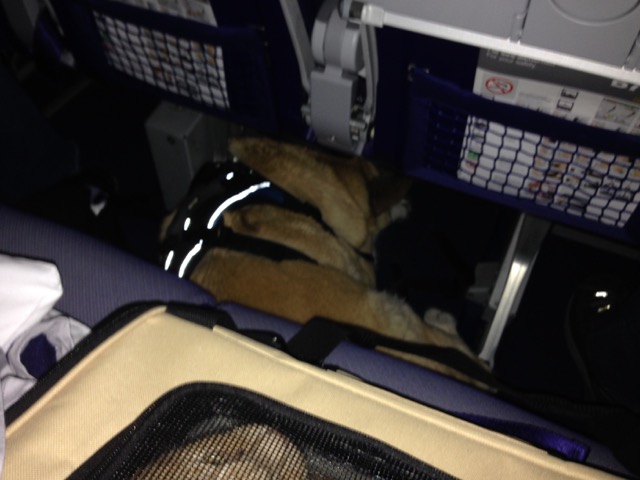 Drunk kitty that would have preferred to hang out in the bathroom for the entire flight. 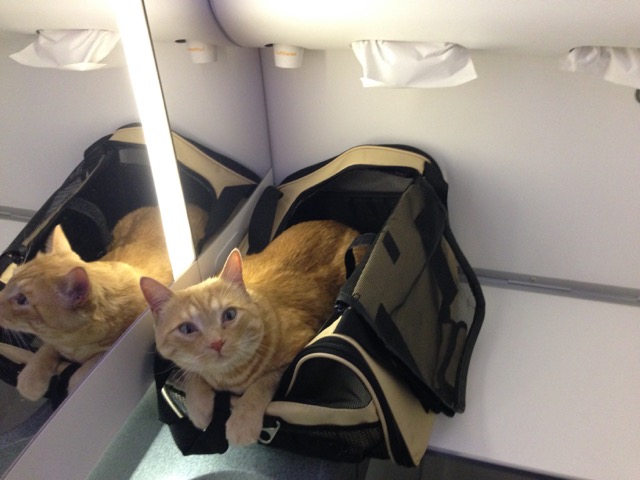 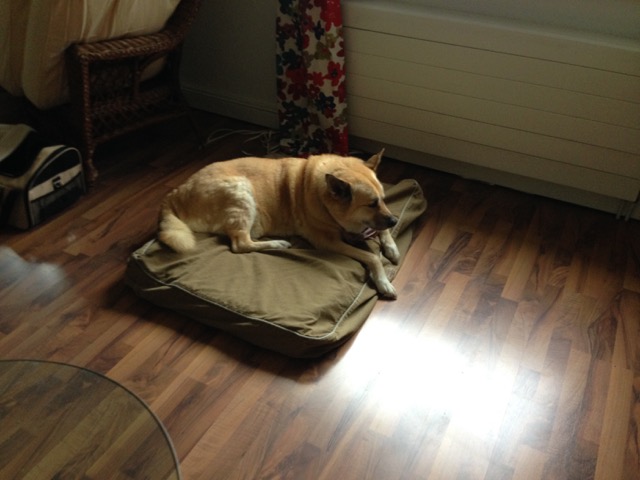 In a country where prostitution is both legal and a non-event socially and morally, it shouldn’t surprise me that they have erotically themed bread. 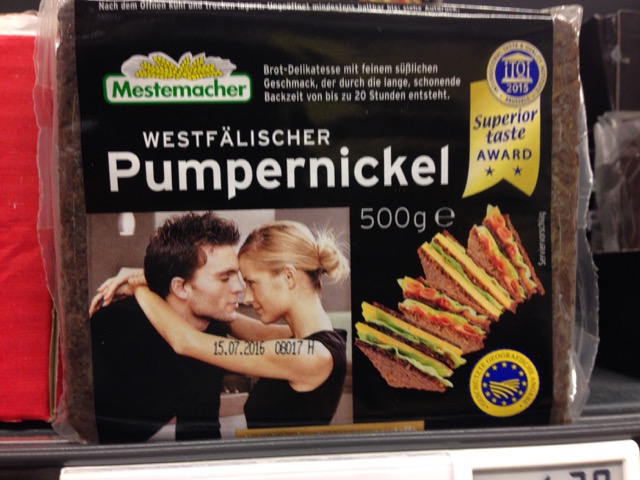 Eat the bread before eating the “Bio Lust Wiener Würstschen.” For a stolid culture of emotional austerity, they are very colorful with their food. 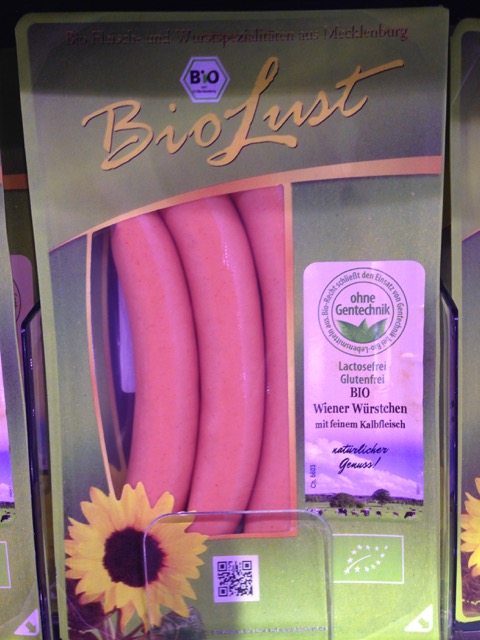