In honor of those who have recently been pummeled in my hometown near Buffalo, NY, and in consideration of the amazing photographs and videos of the lake effect snow coming off the lake, I thought I would write about the occasions I have found myself flying in that stuff.

For starters, yes, I have flown in lake effect snow. Stupid as it sounds, it can be done, though it is through a much lighter variety, and not the apocalyptic, civilization-destroying Snowmaggedon that Buffalo recently experienced. The only aircraft that could theoretically blast into the worst of the snow are large commercial airliners, and that would only be under circumstances that they find absolutely necessary. If they can avoid the snow band, they will.

My first experience was while I was a student pilot in 1997. I was flying the aircraft I now own, based out of my grandfather’s little grass private airport in Wyoming County, NY. It was a cloudy, cold, gray November day, and the forecast called for a few flurries and maybe a snow shower. I was flying very local to the field and saw a tiny snow shower coming out of a cloud, definitely coming off the lake. Getting closer, it was a very small, very light shaft of snow. I aimed for the center of it and, upon arriving in the middle, found that it was denser than I thought. Still legal, and ultimately safe, the snow looked a lot like giant flakes do when driving through them. Slightly surprised at the density of the precipitation, I flew through it a few times. Upon landing, the little snow shower was remarkably close to the airport and when I got out of the airplane, it was a simple flurry. The weather nerd in me loved knowing that flurries were really tiny snow showers where the flakes spread out over a distance, starting at one concise point and covering a large area.

The second experience involved a solid lake effect snow event striking the Southern Tier. Winds were characteristically out of the northwest, so the southtowns and metro area basically had a mostly cloudy day. I flew straight west over toward Hamburg, out over Lake Erie, then climbed up to 7,500 feet over the clouds. The clouds form over the lake and blew inland, at a relatively fixed point, so it is possible to fly out over the water, climb up, and then back over the clouds. It was an odd experience, partially surreal, as downtown appeared below and in front of me, and a FedEx cargo jet flew below my little airplane, with black clouds to the south.

The next one was a bit more brazen, though turned out just fine. Lake effect snow showers were streaming off Lake Huron and strengthening over Lake Ontario, coming in on a north/northwesterly wind. Rarely does the snow do much of anything significant in central Erie County when coming from that direction, a few inches of accumulation at best. There already was a snowpack on the ground that I took off on, and my route of flight was to Buffalo Airfield in West Seneca/Cheektowaga area to get fuel. The flight is usually 20 minutes. Snow showers were IFR (meaning “Instrument Flight Regulations” – poor visibility and only for certified aircraft with proper instruments), so I flew around them, dodging them left and right, particularly over Elma. It was like a maze of sorts, as I would creep around one snow shower, only to find out where the rest were. Although some pilots would find the act risqué, it was a lot of fun. Refueling happened without a problem and I repeated it heading home.

The coup de grace of lake effect flying happened fourteen years after my third experience. After moving south, and having a seven year hiatus from flying, I was back in the saddle and happened to be in NY in early November of 2012 with the airplane. There was a saga about a failed move, and the airplane had to go back down South, before a long business trip to Seattle, and preferably before a snowpack entombed Wyoming County into its annual permafrost. The forecast called for sunny skies on Sunday, so I bought a one-way ticket from NC on Saturday and flew to NY. I awoke at my grandparents’ place on Sunday morning only to see an inch of snow, low visibility, and moderate snowfall. What the heck is this?

Turning on the weather on TV, it was evident that relatively intact bands were streaming north to south off Lakes Erie and Ontario. The band off Ontario was coming down sporadically into Wyoming County, and the Erie bands started west of East Aurora, streaming down toward Springville, though not as strong. Visibility was low when they passed over, and temperatures were marginally around freezing, an ideal situation for icing on the airplane.

My grandfather was insistent that the flight not happen; I was insistent that it did, as if it did not happen that day, it would not happen possibly until Spring. Watching the radar, it was evident that the bands were cyclical, and it appeared I could head west toward Hamburg, follow the lakeshore down, and hopefully squeeze through western Chautauqua County. If I could get past there, I was scot-free, except for bad weather in West Virginia. I’ll deal with that when it comes.

The snow continued to be on and off, various blasts of moderate snowfall impeding visibility, and then disappearing. When it would snow, my grandfather would look at it with a raised eyebrow, almost happy that it was bad enough to deny the flight altogether. Undeterred, I advised that I would be flying after the next shower blew through. When I take off, if there is nowhere to go, I will land. If it’s clear, I’ll be gone.

Upon takeoff, it was clear in sections, and snow and bad visibility in others. I ran into a little bit of precipitation, and it appeared to freeze to the airframe, which is not good. After flying in snow over 20 times, this was a first that icing started. I turned SW of Strykersville to get away from it, then north of East Aurora, south of Orchard Park, north of Hamburg – dodging the snow showers and most of the icing. The ice sublimated between snow showers, thankfully. If the icing were to be a problem, the lake was 43 degrees, so the plan was to get down near the water and let the ambient warmth melt it off.

I got to the lakeshore and headed toward Dunkirk, dodging zero visibility showers as they came in off the water. As I got nearer the Dunkirk, the main Erie band was present: a wall of zero visibility, with a tiny opening. As I zeroed in toward it, it closed. Fiddlesticks. I followed the band southeast inland a bit, and the hole opened a bit, so I turned southwest to head through it. Conditions changed during the crossing and, needless to say, it was a bit harrowing. On the other side, it was fine visibility where I was, but filled with zero visibility weather just about everywhere. I scanned for landing opportunities in a field if needed and thought to myself “This has the hallmarks of ending up in one of those post-mortem NTSB reports about how stupid the pilot is.” Very close to turning back, I decided to proceed a little bit further, and rounding a snow shower, I saw a clear shot to the Chautauqua ridge. I turned south to beeline away from the lake, with the intent to avoid a second band near Erie, PA.

Ceilings were 1000ft and visibility about 3 miles. I was flying by memory, as I had been too lazy to get the map out, and finally had to turn the GPS on at this point with opaque skies and progressively more unfamiliar terrain. I crossed Chautauqua Lake, PeekNPeak Ski Resort, and then the moisture and visibility cleared up, resulting in a cloudy day in Pennsylvania. At this point, I was turning into a human ice cube, and landed north of Pittsburgh for hot cocoa. West Virginia cleared up, and that flight ended with seeing the massive snowfall in Appalachia from Hurricane Sandy, a fascinating sight for the weather nerd in me.

While that is it for actual lake effect flying, I had one experience that was pretty close to flying in lake effect in North Carolina, and I got photos. The following February, snow was forecast in Charlotte, and as the front approached, the forecasters noted that it was a “band of snowfall with convective properties”, with snowfall rates of one inch per hour. As lake effect snow is a mesoscale system with convective properties, I dropped everything and drove to the airport as I knew it would be worth seeing. I took off and headed NW toward the snow as it approached the airport. It was basically a wall.  I flew along it to enjoy, and then landed in just enough time to taxi to the hangar before getting dumped on. It snowed 2 to 3 inches in two hours, half of the annual snowfall for Charlotte in one afternoon. 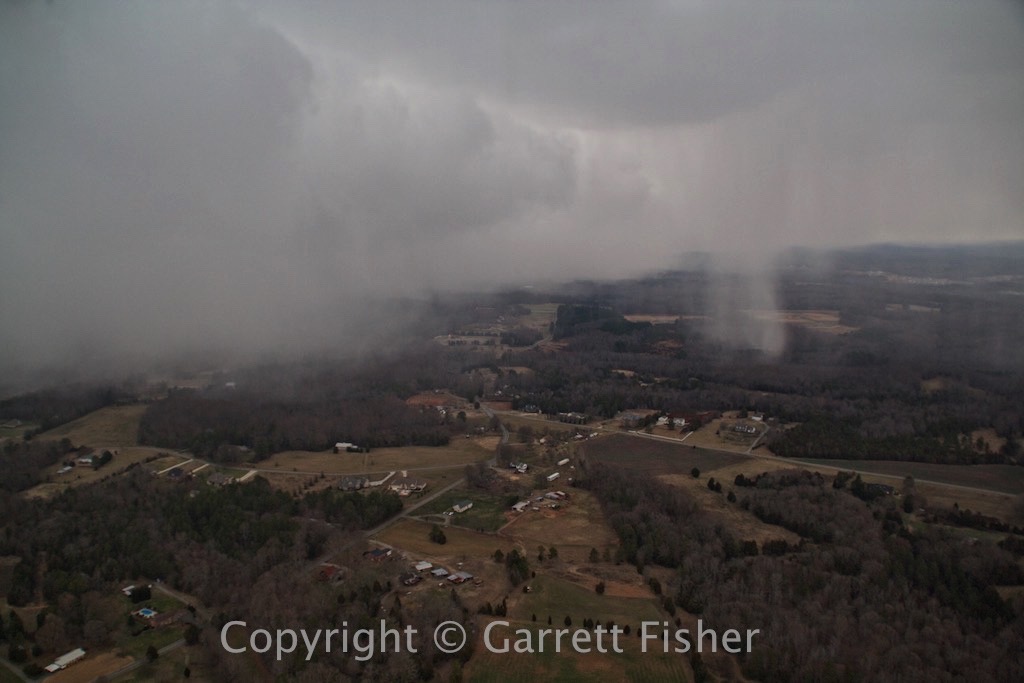 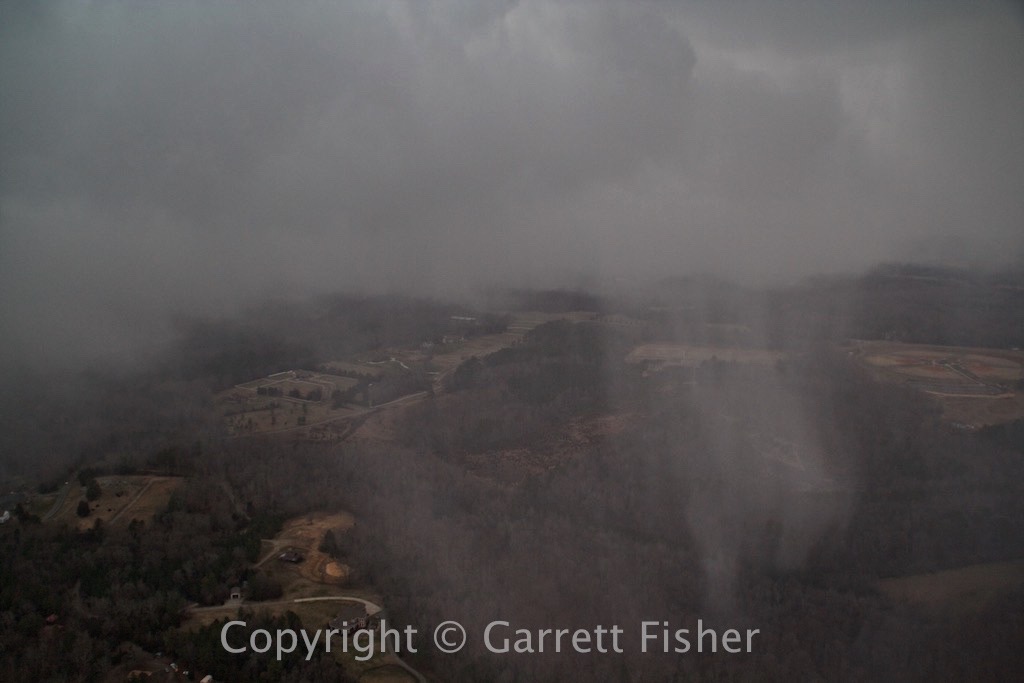 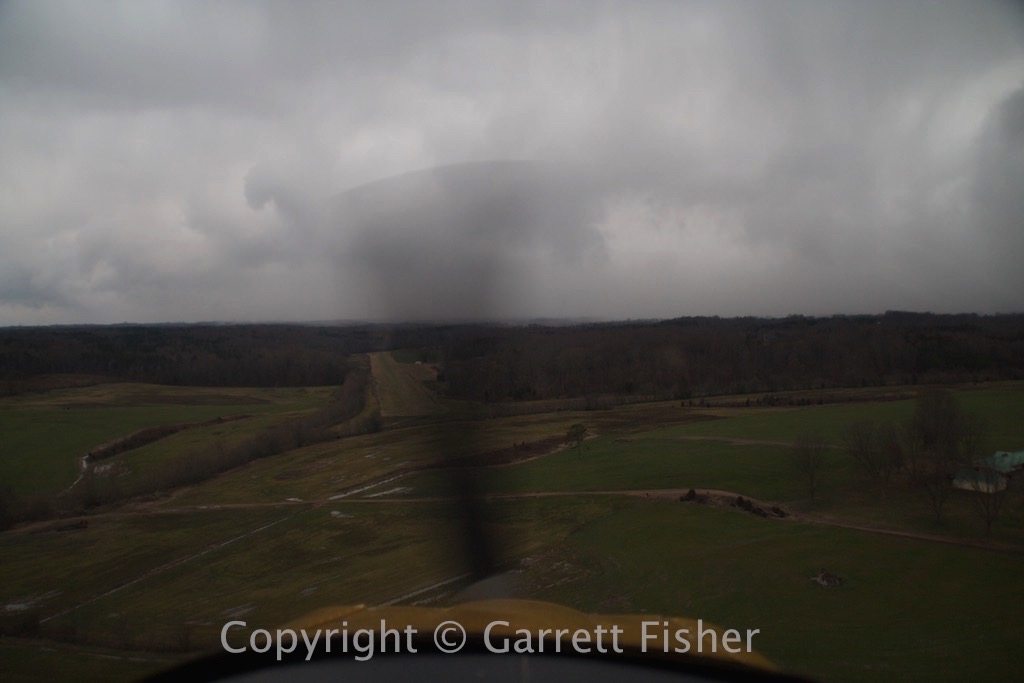 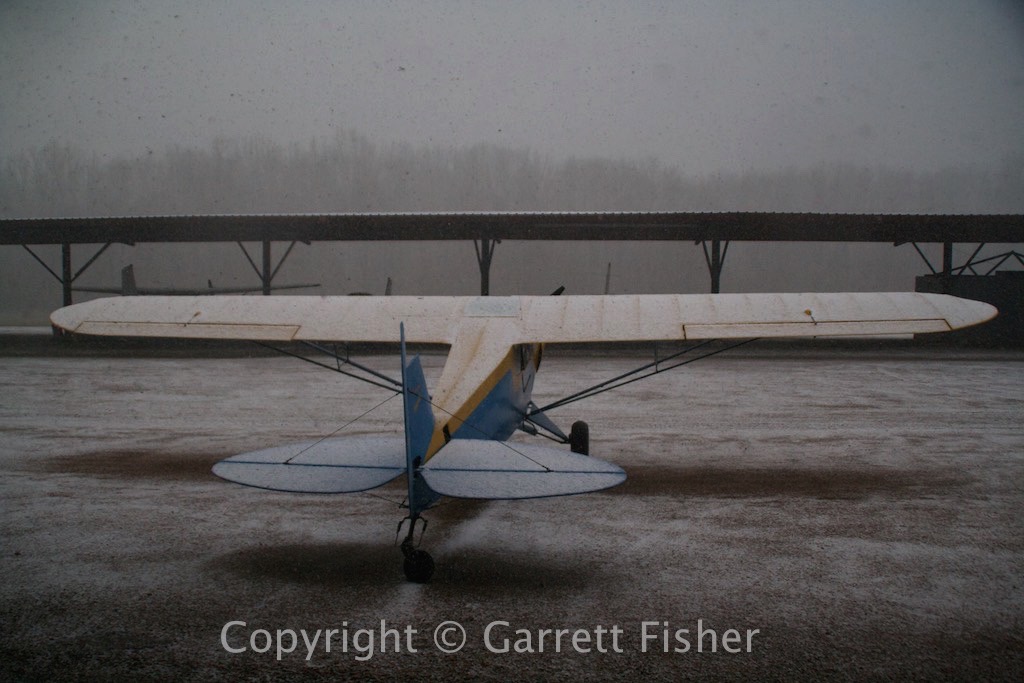 So that is it for lake effect style events in an airplane. The weather nerd in me loved every one of the experiences, as like the photos that started coming out of the snowpocalypse in Buffalo, it truly is majestic to see it from the air.