Yet again the weather was fickle, making the go/no-go decision a complicated one. The forecast called for one day of sunshine, with some drying air, though still a NE wind off the Atlantic, which had characteristically provided both terrible and nice air, from the same air mass. On Friday, I was at the airport handling some maintenance, and had some time to fly around the pattern for fun. While cloudy, the air was very nice beneath the cold air damming stratiform cloud deck. Saturday should work fine.

The evening forecast commentary called for 40% cloud cover in the Piedmont, though delightfully 0% in Charlottesville, VA, with comments in Virginia forecast discussions that the air coming in, although from the NE, was essentially mid-continent sourced and training in around a high pressure zone. Complex, though it looked doable. West Virginia and the NC mountains called for 31% to 49% cloud cover, so it would be Shenandoah. I am working on a book about the Blue Ridge Parkway, which terminates at Shenandoah National Park, so this was the obvious leg to pursue. Calculations indicated that I needed to be airborne by 9:30AM to have enough time for 8 hours of flying plus two fuel stops, in time for 7:15PM or so sunset.

I arrived a bit early at the airport, and get into the air a bit earlier than scheduled. The air was somewhat soupy, though to be expected in morning haze and quasi-fog layers. Takeoff was a bullseye through nascent clouds, where a gap in the rising fog presented itself perfectly over the takeoff path and I popped through in legal limits and above some stray puffy clouds, leveling off at 2,000 feet. It would be an hour to get to the starting point of photography: I-77 at the VA/NC border, where the Interstate makes a precipitous ascent into the VA Blue Ridge Plateau. On the way, I found some fields to photograph, something I do to stay occupied on long flights, and something that I will someday make a book out of. I have countless photographs of fields with stunning textures and visuals. 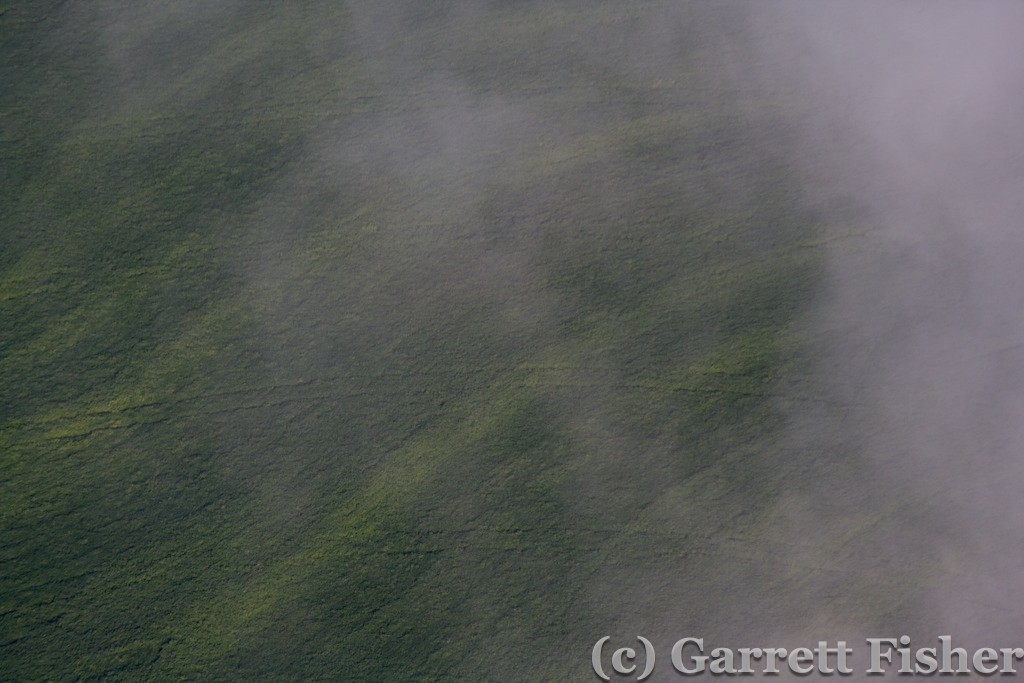 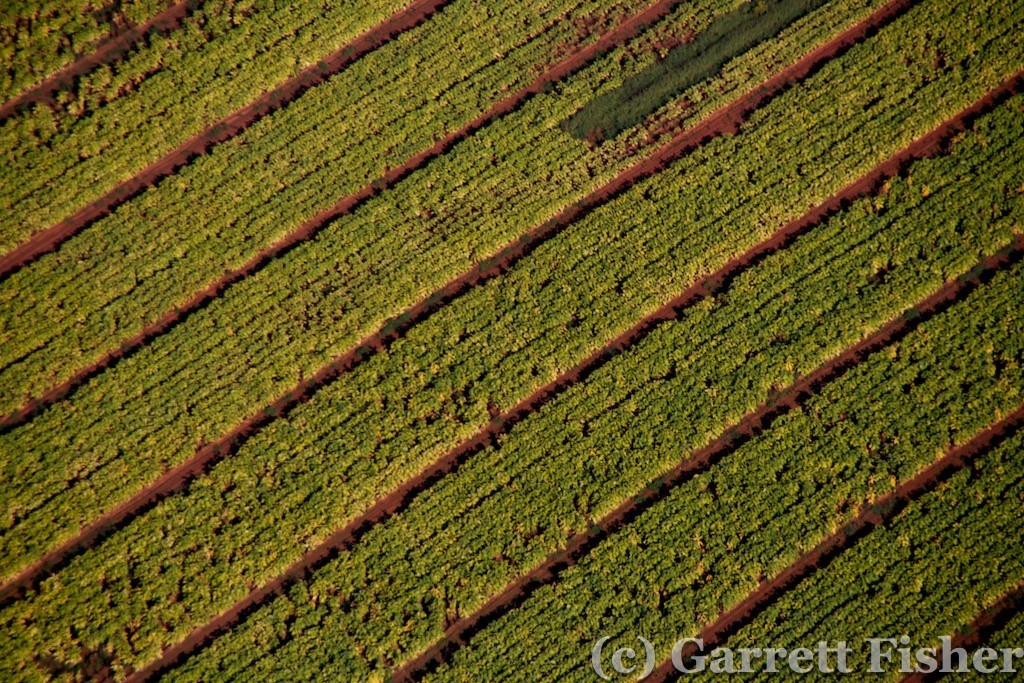 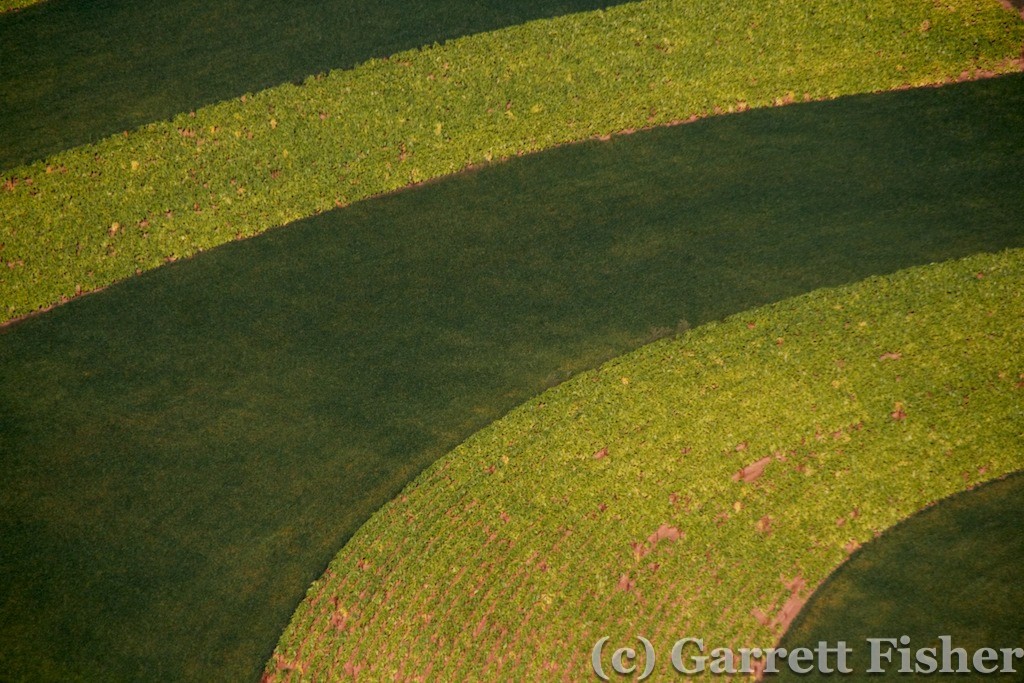 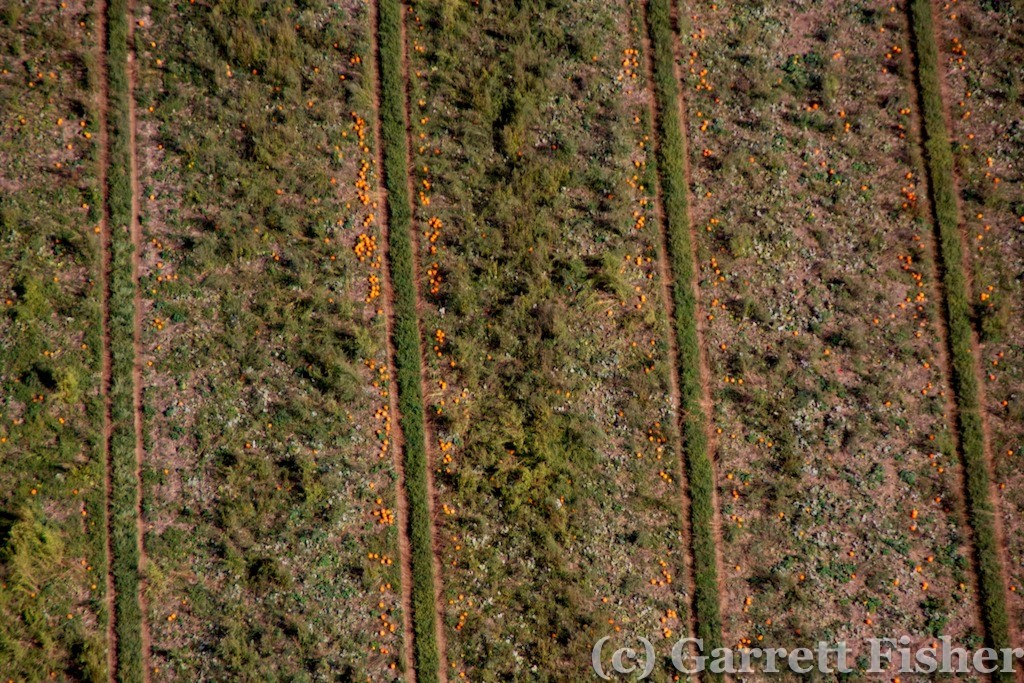 The Virginia section of the Blue Ridge was somewhat dull SW of Roanoke. It is the lowest section of the BRP, with the most trees, and least terrain features. I came across a religious castle, which looked oddly European, as well as a canyon. Yes, a canyon. Its not even a park, nor on the map as anything interesting. Who knew there was a canyon in Virginia? 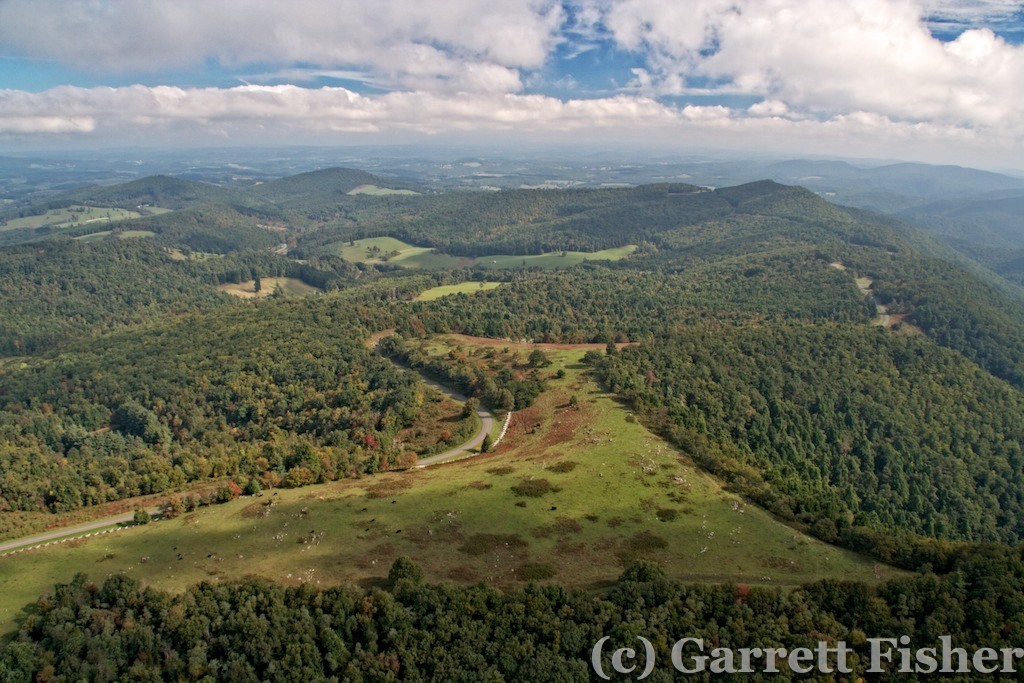 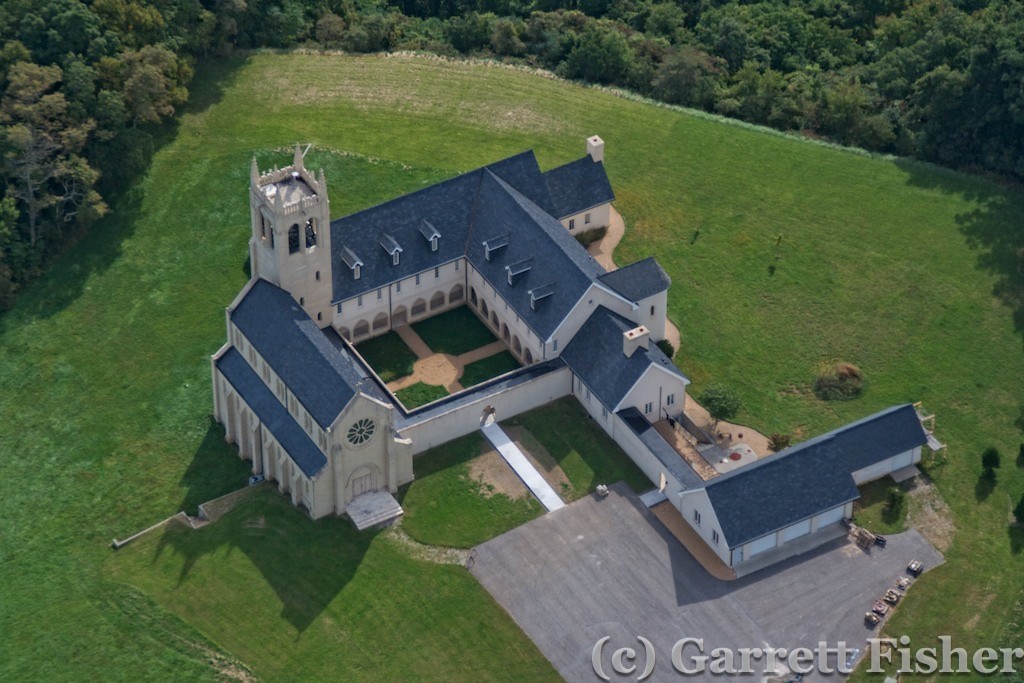 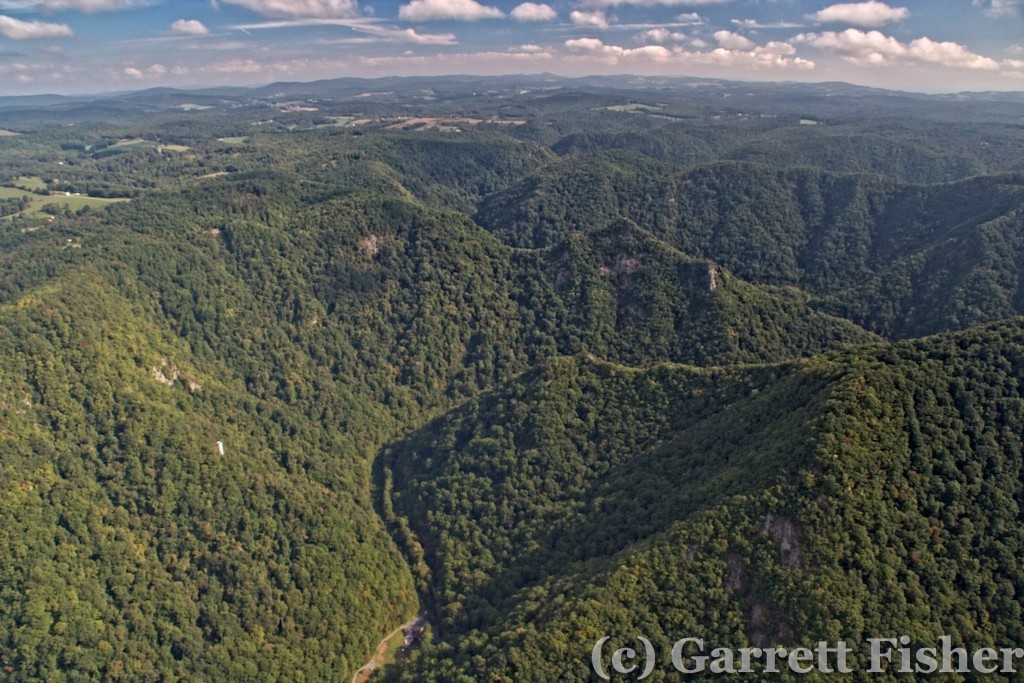 A Canyon in Virginia?? 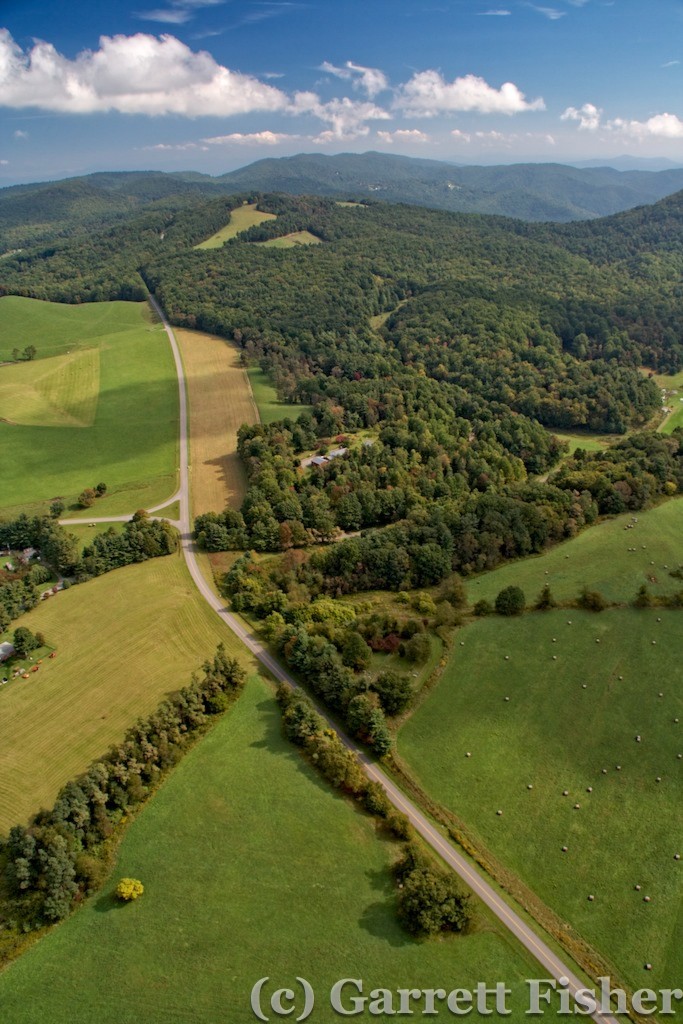 NE of Roanoke, the air cleared out, and the terrain was quite amazing. Right along a typical Appalachian ridge, the BRP ascended and ran along the summit, winding its way up to the Peaks of Otter and then the highest sections of the BRP in VA, with rather interesting views and terrain. The valley below is an extension of the Shenandoah Valley, something I have flown twice to NY and back, and its pretty every single time. By this point, I was getting low on fuel, and opted to descend into the valley and straight line to Eagles Nest Airport in Waynesboro, where I would catch some of the missed terrain on the way back. Eagles Nest was an airpark, where about 30 houses were connected to the airport, and residents were pilots. That is the way to live, hearing sounds of airplanes all day, and as was happening that day, good social interactions. There was quite a picnic going on with kids having fun and lots of food. Fuel prices were not as kind as the community there, $6.50 a gallon, and I broke my record for the most expensive tank of gas ever purchased. I opted for this little airport, not far from Shenandoah Regional, because the smaller ones are usually cheaper than the regional airports with large infrastructure. Sigh. I used to think avgas at $2.40 a gallon was sacrilegious in 1998…… 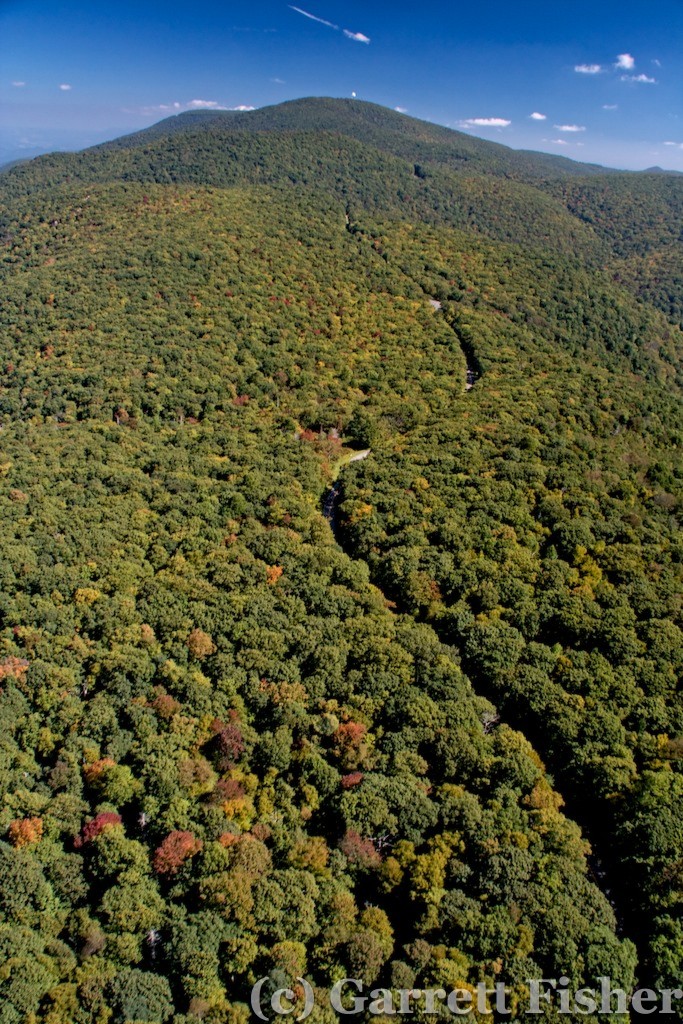 BRP, North of Peaks of Otter 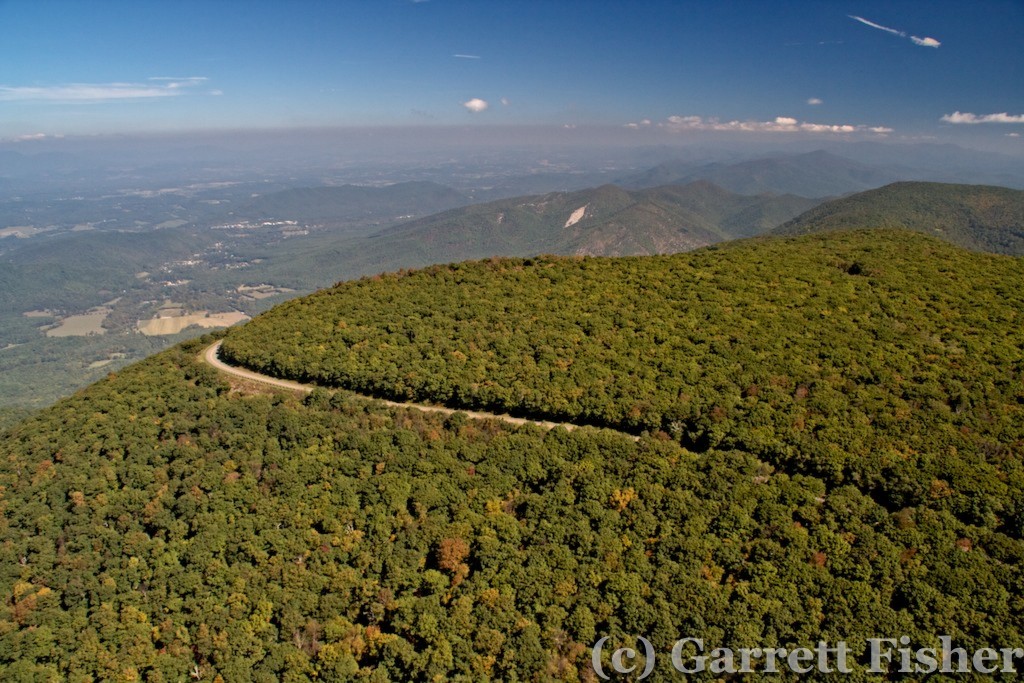 Precipitous Section of BRP in Virginia 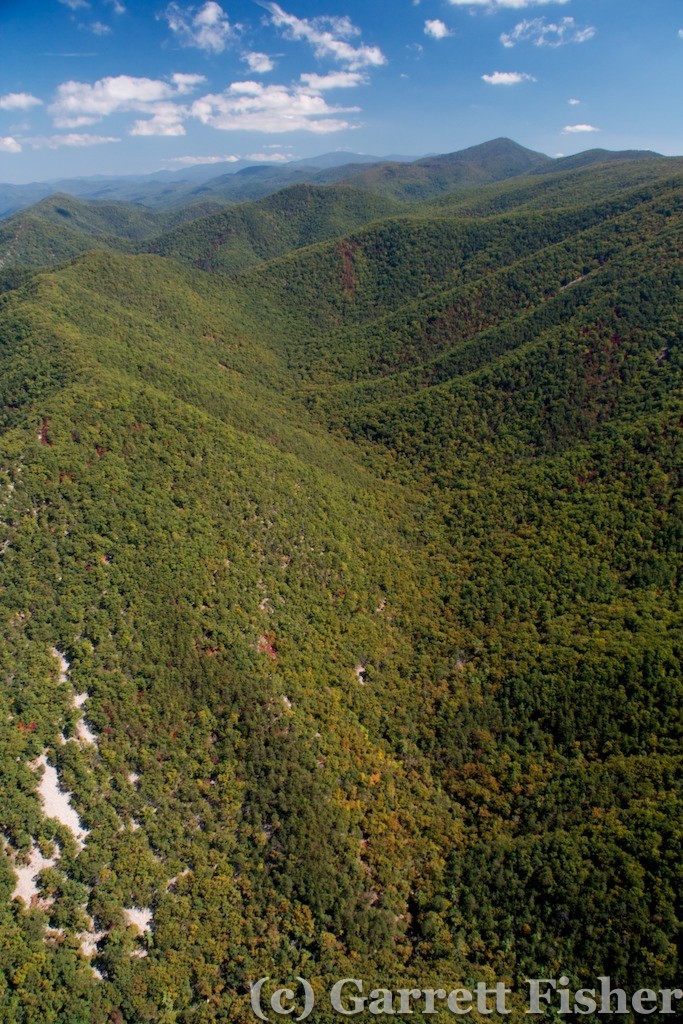 After takeoff, it was straight into Shenandoah National Park for photos of Skyline Drive. Suffice it to say, the park is amazing. My wife and I went in April 2005, where it snowed near the summit, and it was simply beautiful, as it was on this flight. It is quite a long park, requiring 90 minutes to fly the length up and then back. Heading southbound into missed terrain, I found another castle, where I would not be surprised if it was actually guarded with cannons and guys with bows and arrows. 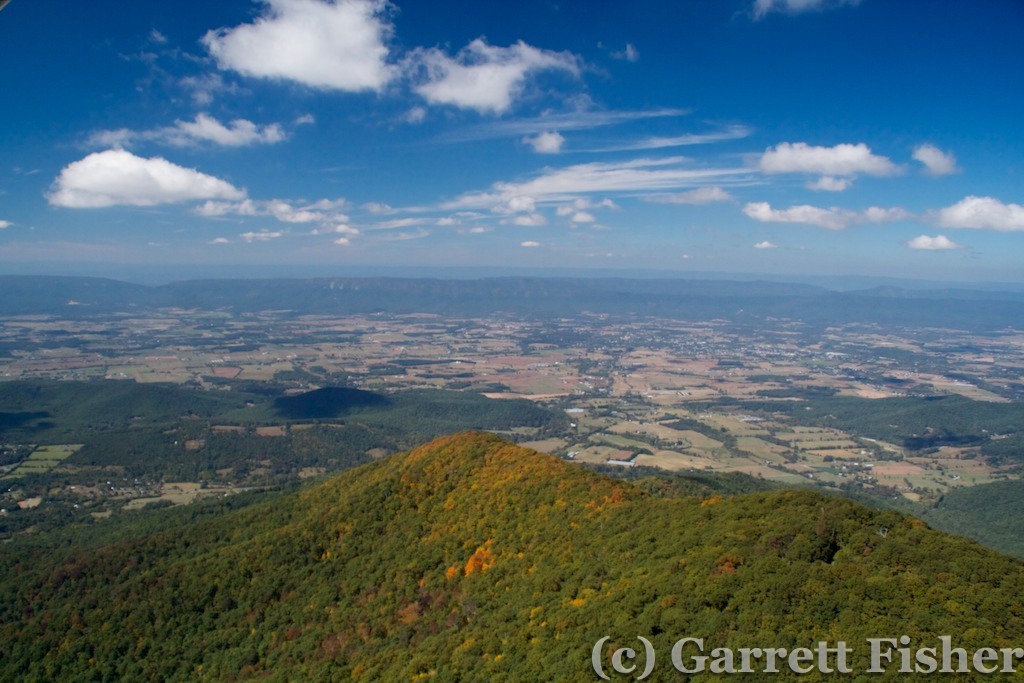 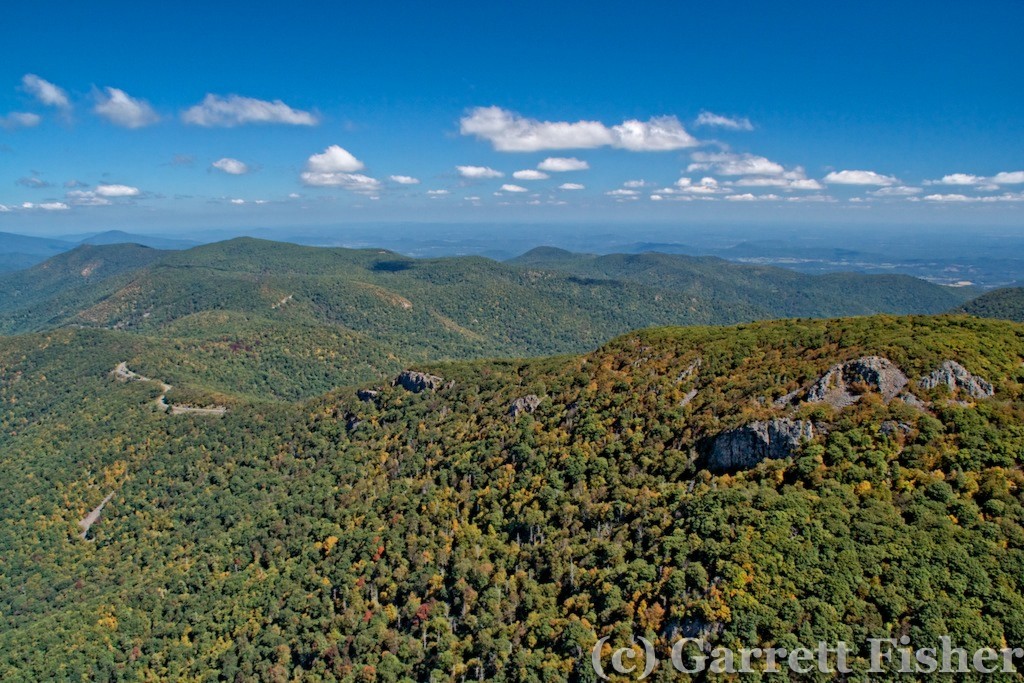 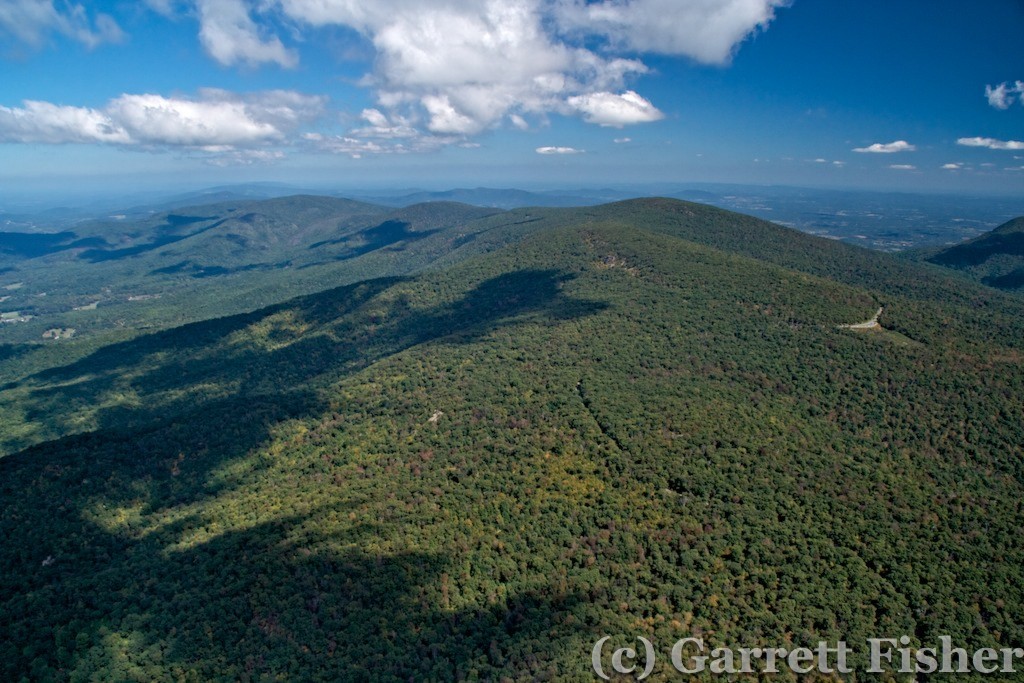 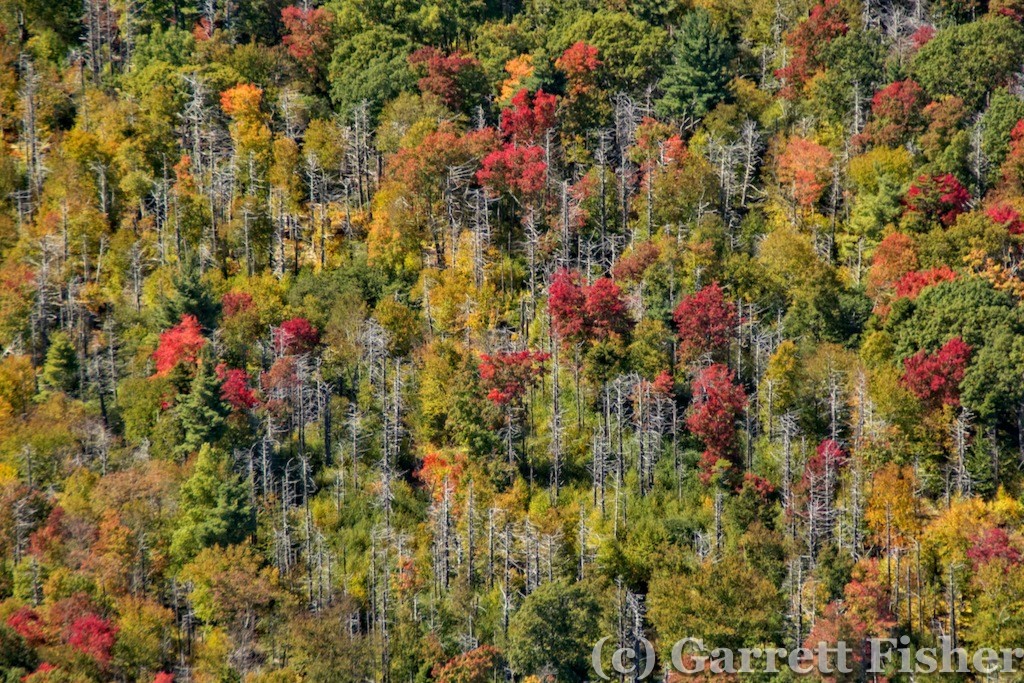 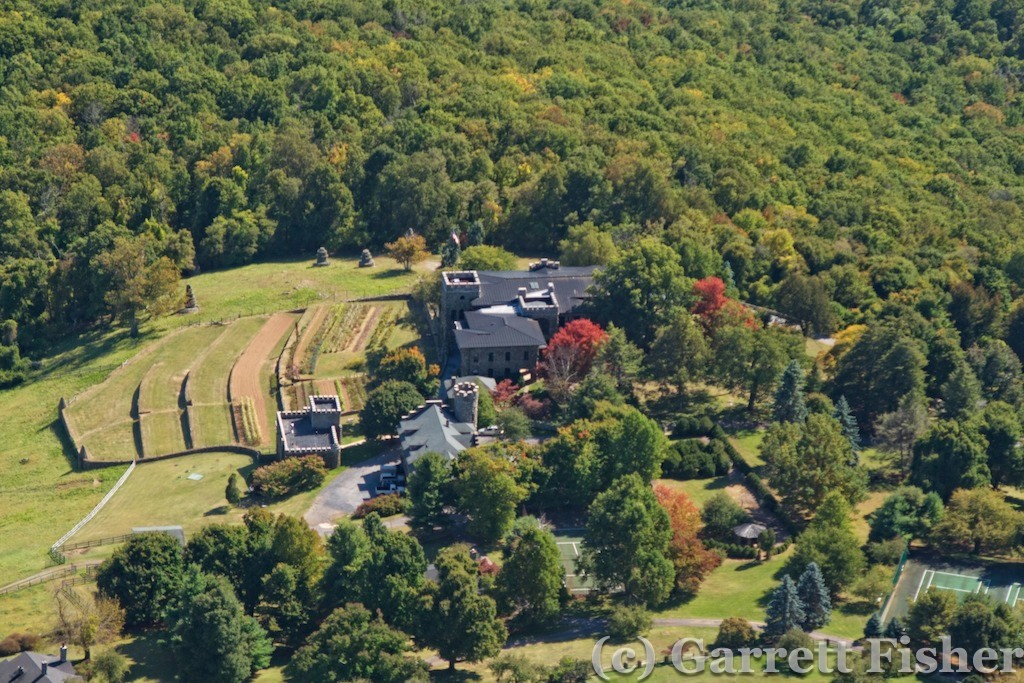 Wintergreen ski resort was next, followed by some interesting terrain, and then a descent low into the valley. Sometimes the BRP traverses the literal summits of mountains, other times, it goes 2,000 feet lower and bypasses them. Obviously it had to do with engineering and land acquisition issues back when it was built, though it seems almost random sometimes. 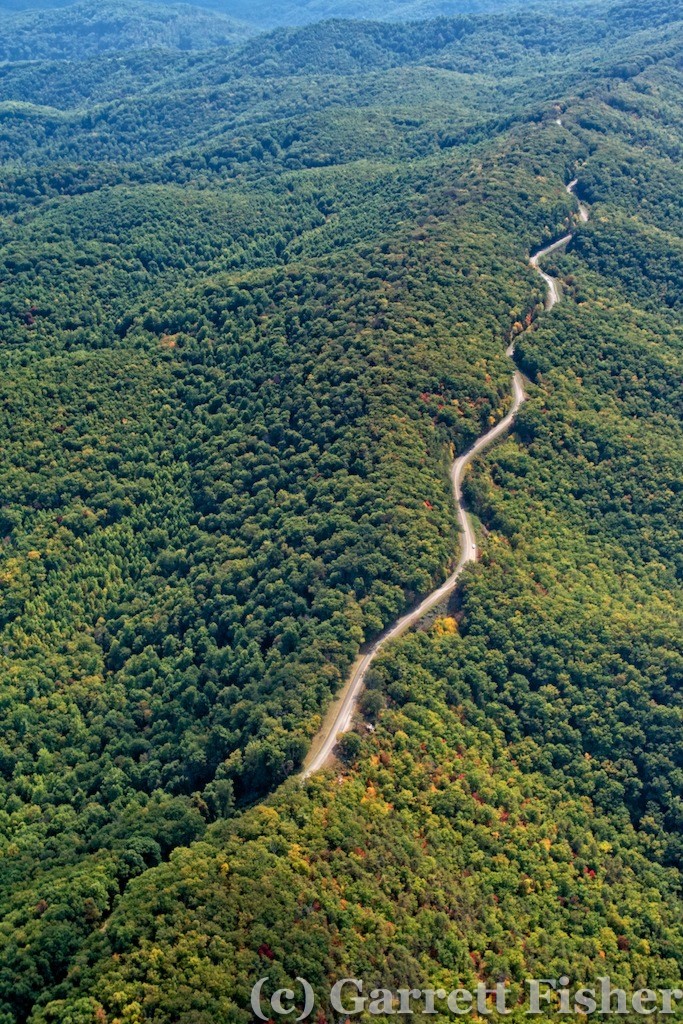 After the terrain northwest of Lynchburg, it was time to head straight back to Lincolnton, NC, which took me over the VA and NC Piedmont. Refueling was at Smith Mountain Lake Airport, another airpark and then over Martinsville VA. Microsoft has a $348 million data center facility there, and I could not find obvious indications of it. Usually, there is high AC load relative to warehouse space, and I hadn’t planned on being there to look, so I passed on that option. The flight passed Hanging Rock State Park north of Winston-Salem NC, then straight back home. On the way, I got even more field photos. In all, it was 7.5 hours of flying, and I was less tired than 5 hours in the NC mountains. A big part of it has to do with this flight being far less perilous as the terrain was gentler. There were no clouds to worry about, either, and the blue skies and sun made photography easier. Those three factors, when all made worse, are very fatiguing. This was just plain fun. 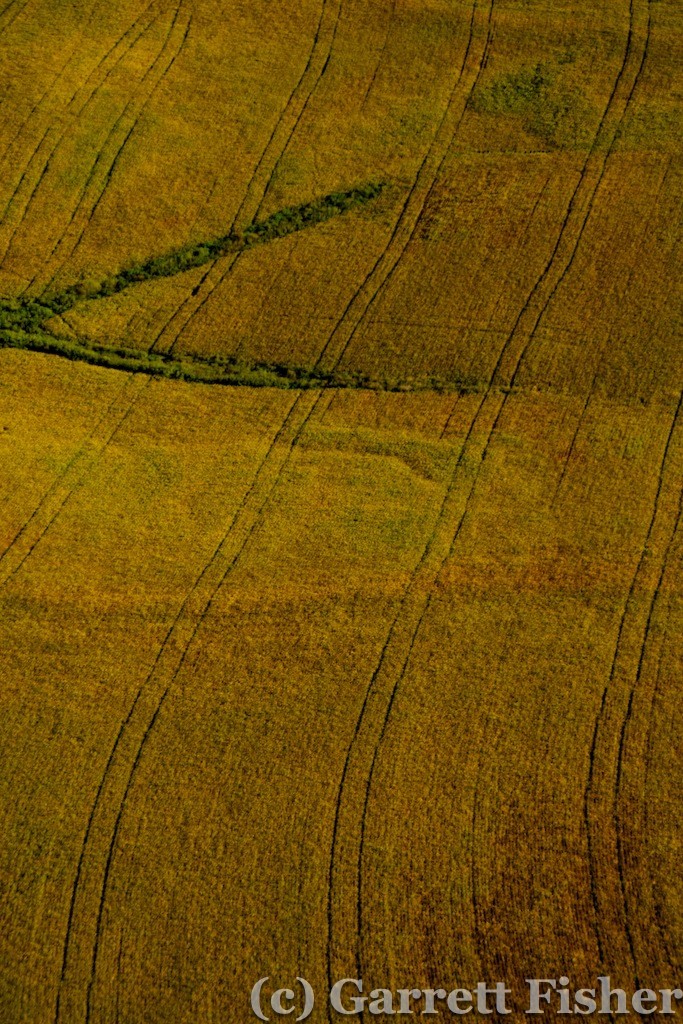 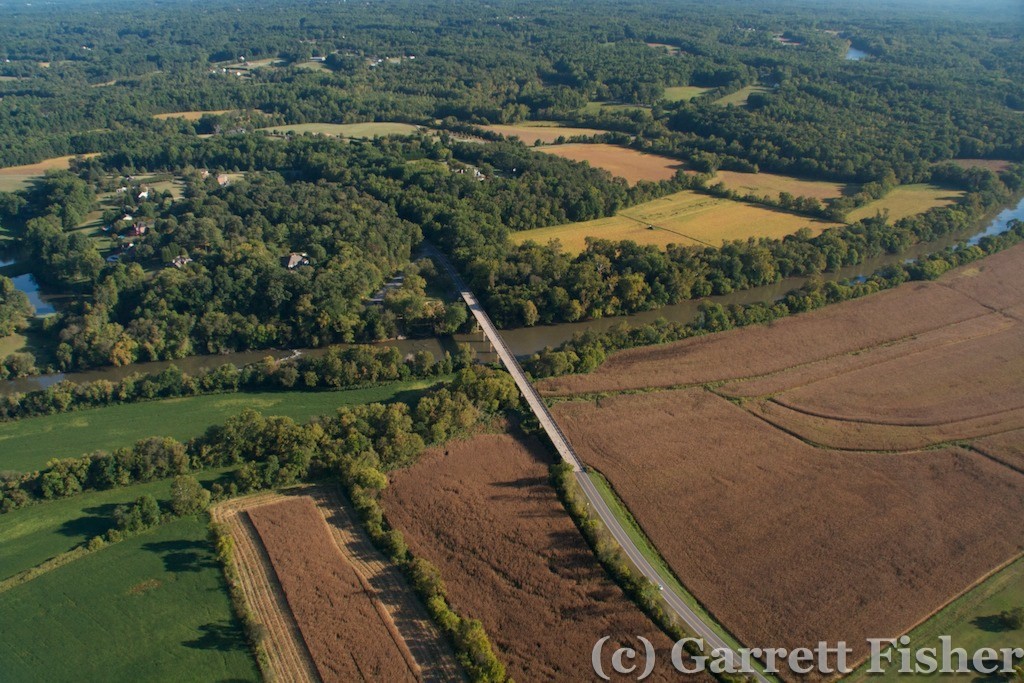