The much promised dry cold front didn’t happen as promised, and a host of aggravating days went by before some nicer weather came in, or so I thought. The cold air damming regime finally was breaking up, and the forecast called for partly cloudy skies in Charlotte, mostly sunny in Asheville, and clear over the Great Smokies. Seeing that a front was responsible, I was sure we’d get some clear air.

It takes 2 hours to pick up ethanol-free gas, drive to the airport, move the airplanes around and out of the hangar, transfer the gas to the airplane, and put the other airplanes back. Add 20 minutes until takeoff, so now almost 3 hours invested into the process, and upon takeoff, it is clear that I am flying in partly cloudy soup. What gives? Since the mountains are often clearer than the Piedmont in situations like this, and since I am 3 hours into it, I headed west.South Mountains was sort of socked in clouds, with a little spot to hop over. I could of gone around, and did not. I queued up the GoPro to record squeezing between the peaks…..and the battery was dead. No problem, I have a spare. That too, was dead. Now between the haze and my toy not working, I was pissy.

I popped between two peaks and wedged between the cloud deck and came out above the clouds on the other side. Interesting. I traversed northwest toward Marion and then west toward the Blue Ridge, passing over a giant cross on the ground near the Continental Divide. I am surprised that thing doesn’t have to be registered on FAA maps. Getting a few pictures of the Blue Ridge Parkway south of Mt. Mitchell, I realized that while Asheville was sunny, it was also hazy, and the Balsams looked clouded in. I was now throwing an internal monologue temper tantrum. Oh well, I shall get more peaks with fog and clouds for the book, not expected in my plans, and accurate as this happens a lot in the Southeast. It is wet here, for those that missed the memo. Then, during my pissy whining, I flew over the Biltmore Estate, the largest house in the world. Now I was happier. 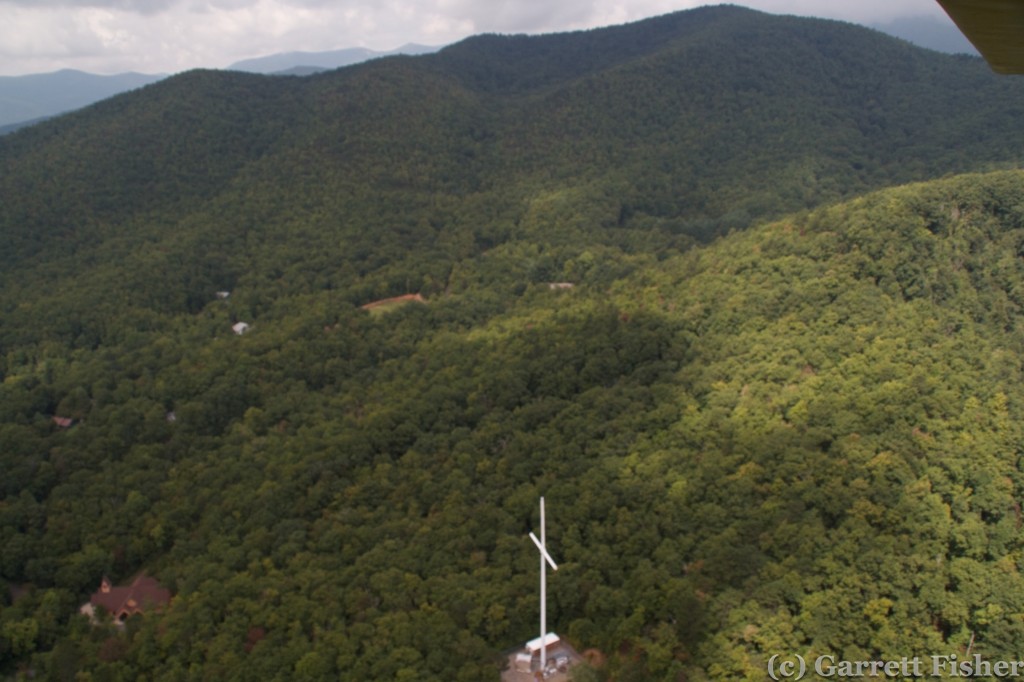 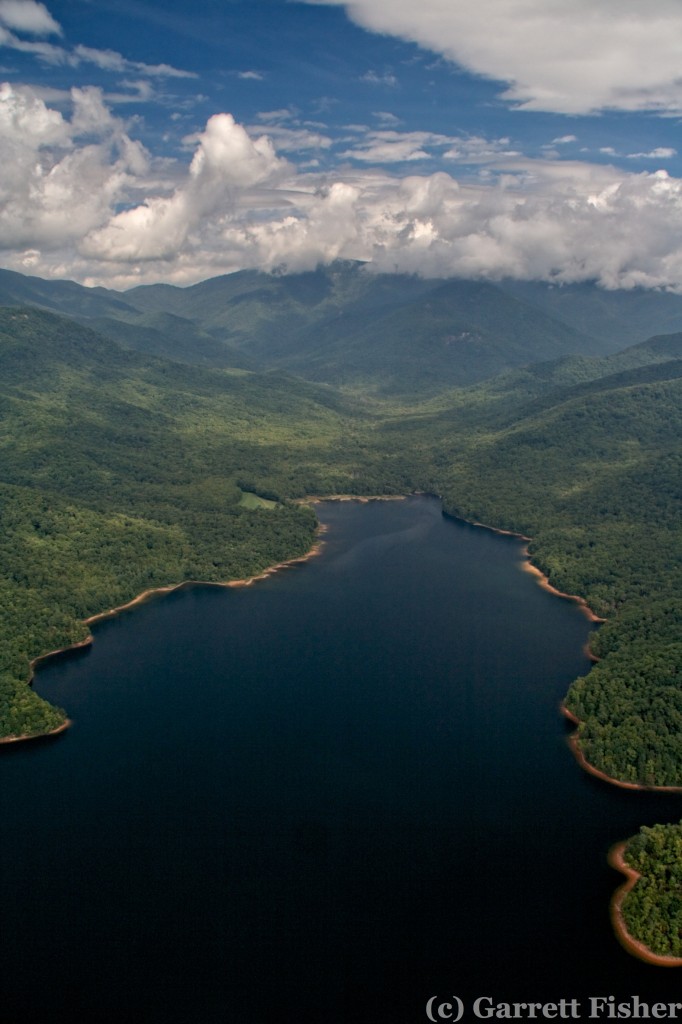 Some Lake on the Base of the Blue Ridge 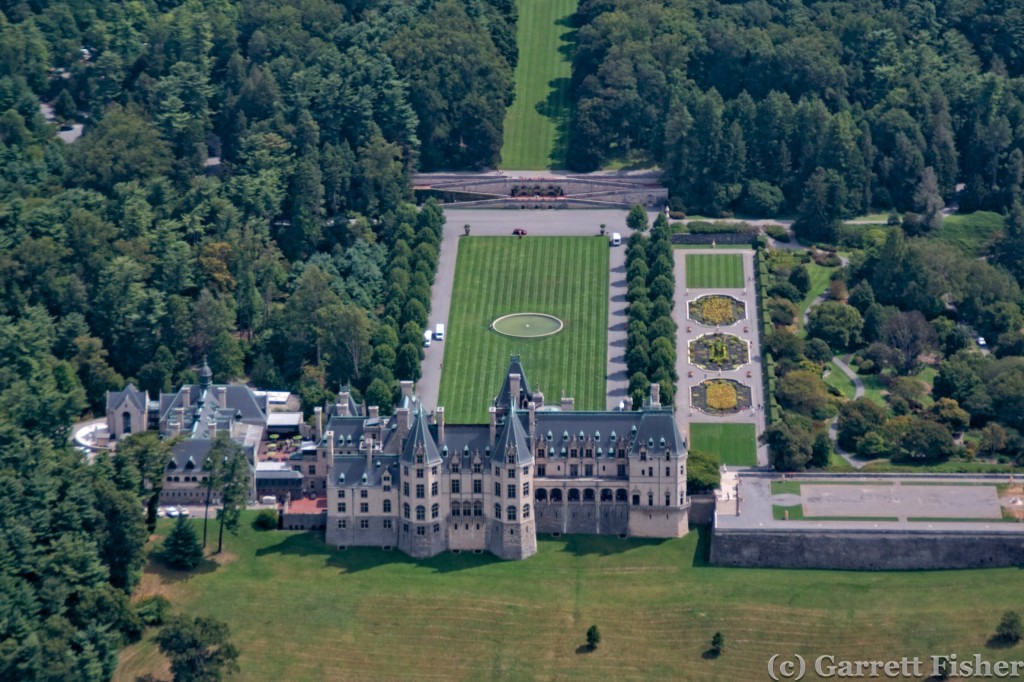 Ascending toward Mt. Pisgah, the photographs were challenging, though had some interesting texture. As I got south of Mt. Pisgah, it was another situation where the clouds were over the peaks, yet a gap in the pass allowed me to skim through. Skim I did, and on the other side, the clouds were right at the crest of the Balsams, filling in on the leeward side and allowing enough room to pass by on the windward side. I was curious what the Balsam peaks would be like, as I was only around 5,000 feet at this point, and they top at over 6,000. Much to my glee, it was a similar situation, a cloud deck on the north side, and wispy cloud interactions on the south side. Photography was incredibly challenging with low light and a wide differential between bright and dark areas (that, and avoiding flying into a cloud or one of the mountains I was photographing). Still, I obtained photos I could not imagine. 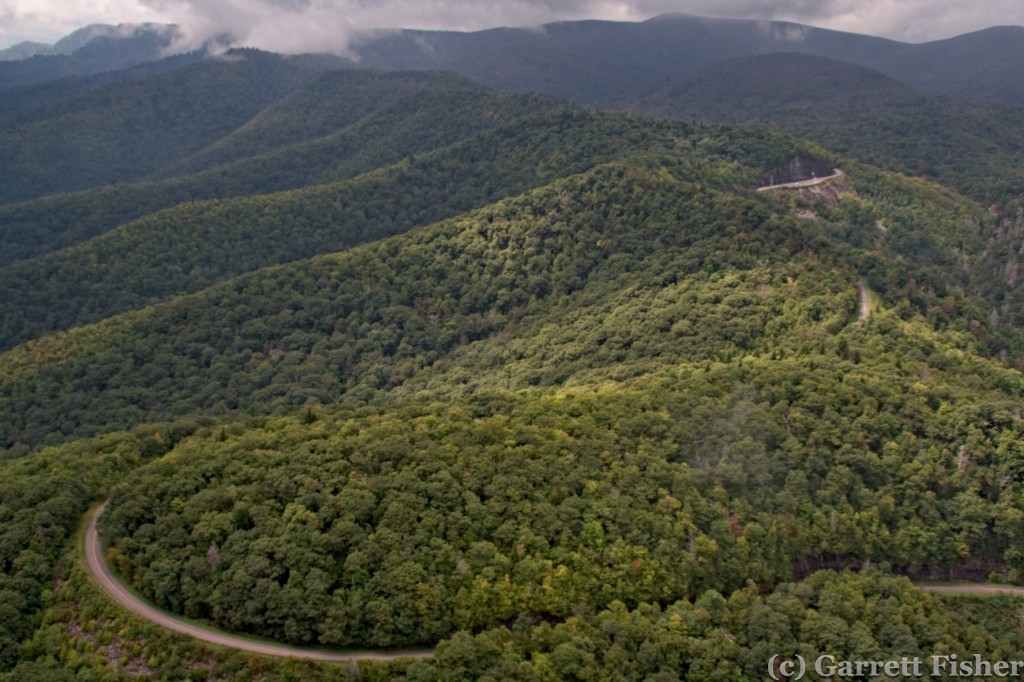 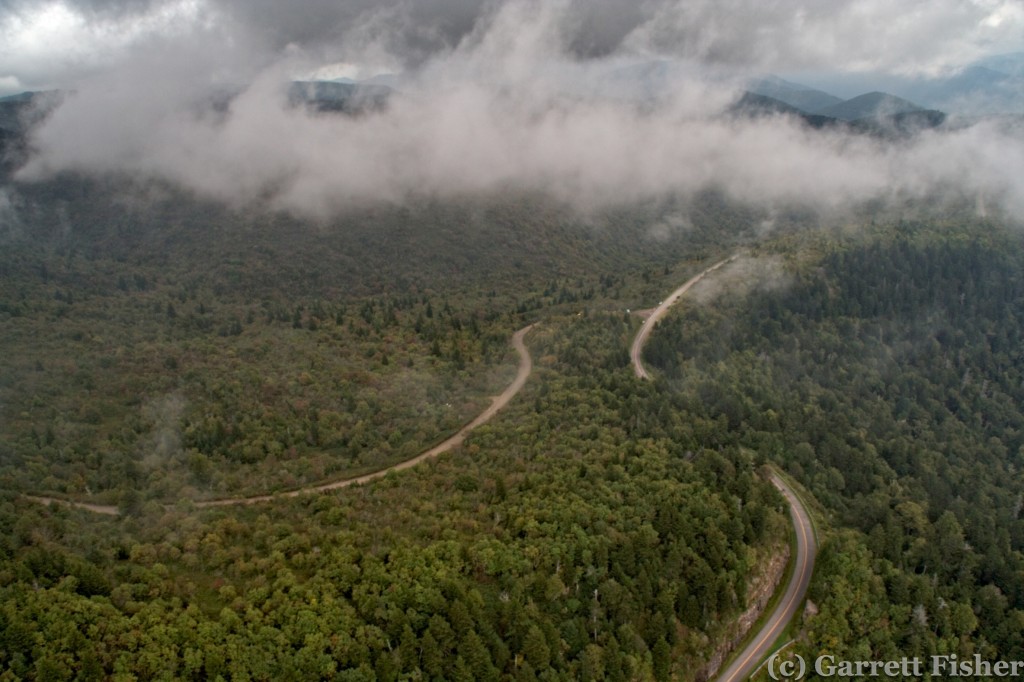 There exists easier flying than this. Black Balsam crest with Blue Ridge Parkway. 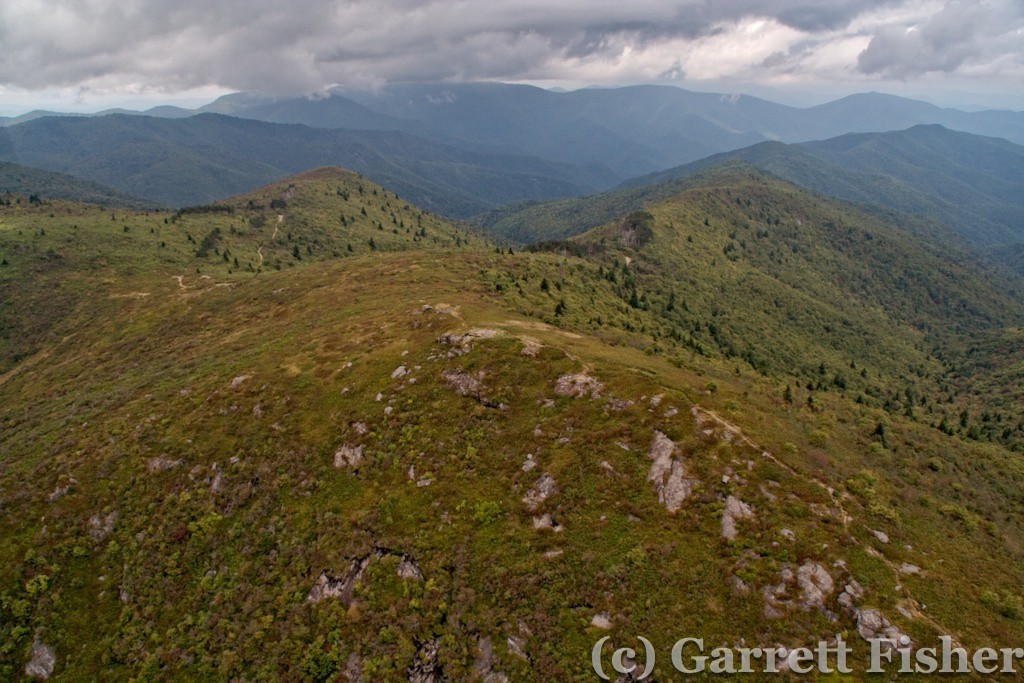 Next up were the 6,000’ peaks west of Waynesville. I found yet another giant cross, this time on the top of a 6,000’ peak, and had to wonder what the exact point is of putting one there. I think people who build symbols like this don’t think of their intended effect on others, they just build them. Are they telling me they are Christian? Or that I should be Christian? That crosses exist? It’s a cross, just sitting there, and I am not sure what they are asking me to do about it, I suppose, other than flying into it. 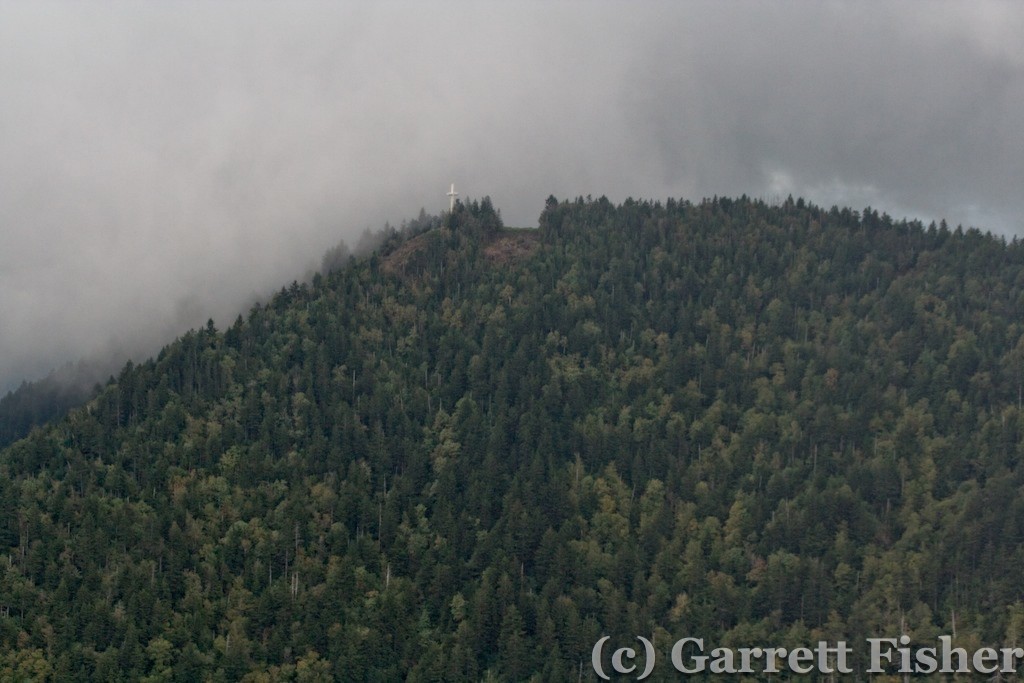 Great Smoky Mountains National Park was quite pretty, with somewhat lessening clouds, though still the majority of the weather. So much for the forecast. The terrain in that park is rather severe, with evidence of mudslides on occasion, truly an unusual feature for the Appalachians. If someone were to expand the range 200%, they would be as epic as the Rockies. In the event of engine failure, it would be highly interesting, to say the least. There isn’t a place to land, except into trees, and its complete wilderness. The question is – land in short trees at the summit, and then hike to safety, assuming there is no injury, or glide down 3,000 feet into bigger trees, and do the same thing. Thankfully, the engine did its job. 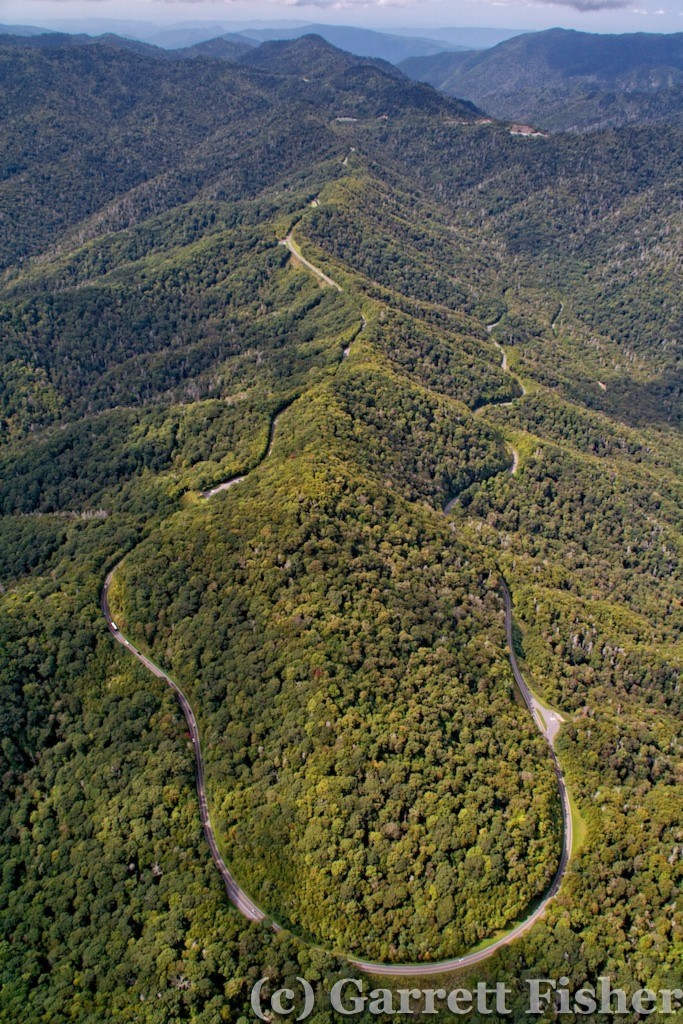 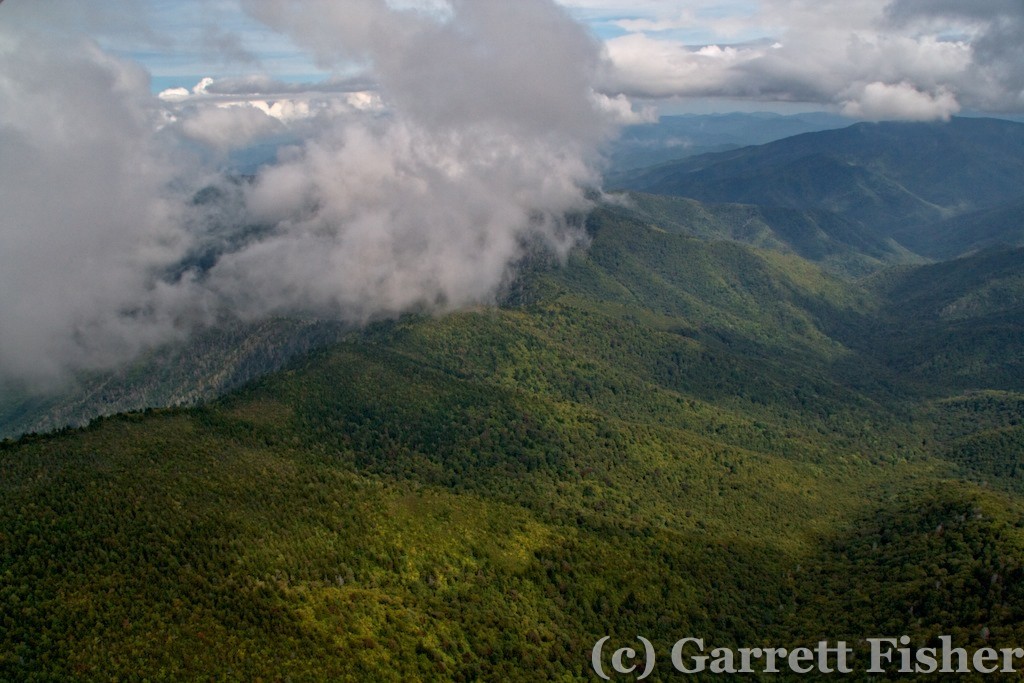 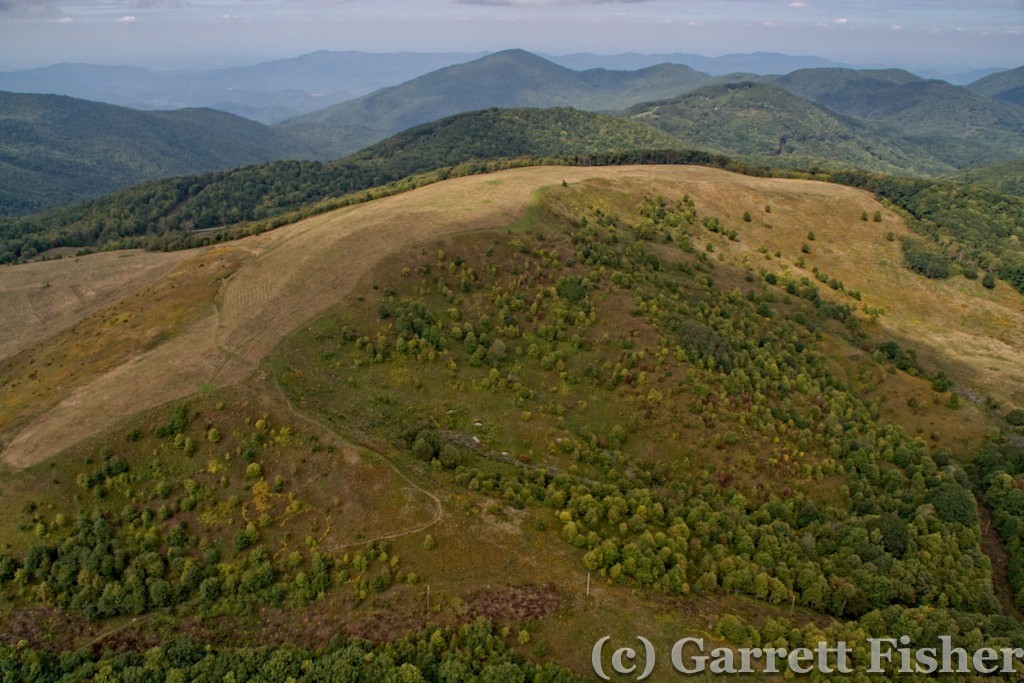 Fueling was Greenville TN, followed by Roan High Knob, again in the same configuration with clouds, with some drizzle and more clouds over the northern parts of the NC mountains. The flight home was uneventful, though photographing thirty peaks over 6,000 feet with clouds around them as well as well over 100 miles of the Blue Ridge Parkway was unbelievably mentally exhausting.

A few days later, we drove up to the Blue Ridge Parkway east of Mt. Mitchell to hike Crabtree Falls. We were treated with an overlook at about 3,000’ showing a clear view of the Black Mountain Range, all over 6,000’, which was photographed on the prior flight and documented on the last blog post. Crabtree Falls was quite pretty followed by our favorite jaunt in Blowing Rock, Bass Lake. We topped it off with the buy one get one special at Starbucks in Boone and headed home. 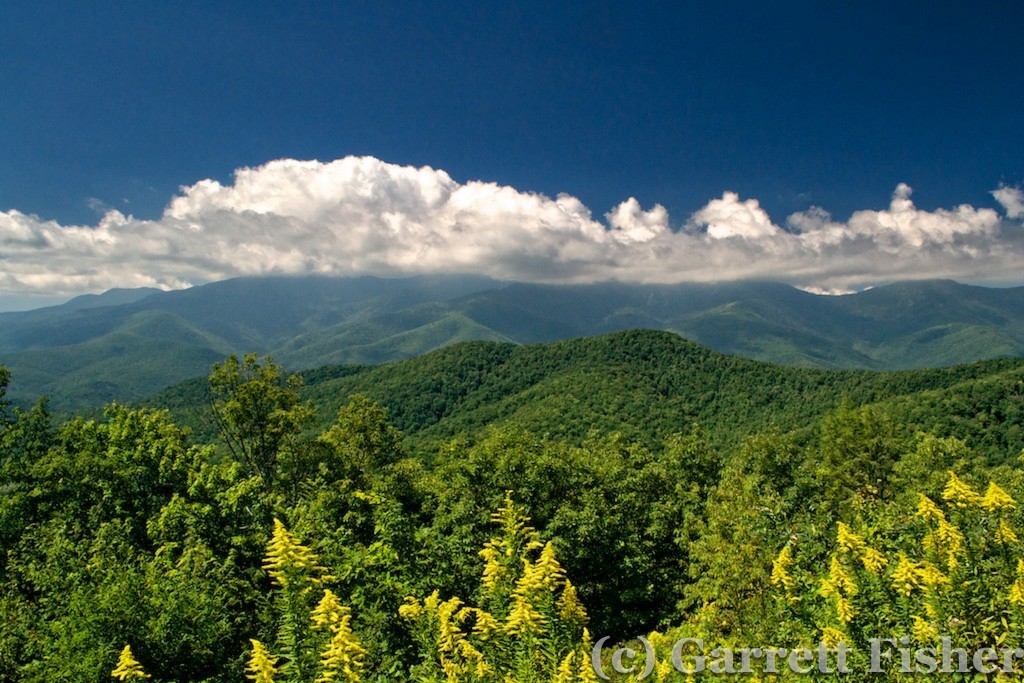 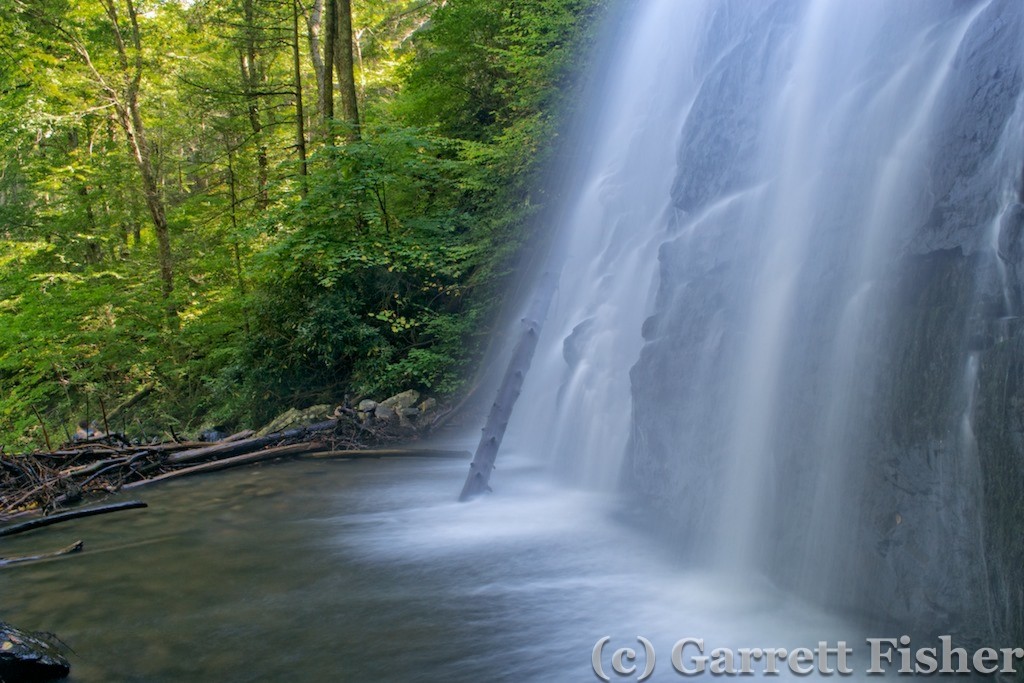 Two days after that, I was back at it. The Canadian cold front had come, with blue skies and dry air. Visibility on takeoff was 60 miles (angels singing), and I could see Mt. Mitchell from the Lincolnton airport. The route of flight was Linville Gorge, BRP to Boone, then South Fork New River, North Fork New River, New River all of the way to Charleston WV, and back.

My GoPro was working this time, so I shot a video of passing by Linville Gorge. It was bumpy due to wind, so you can see that in the video as I pass by Table Rock and Hawksbill Mountain. 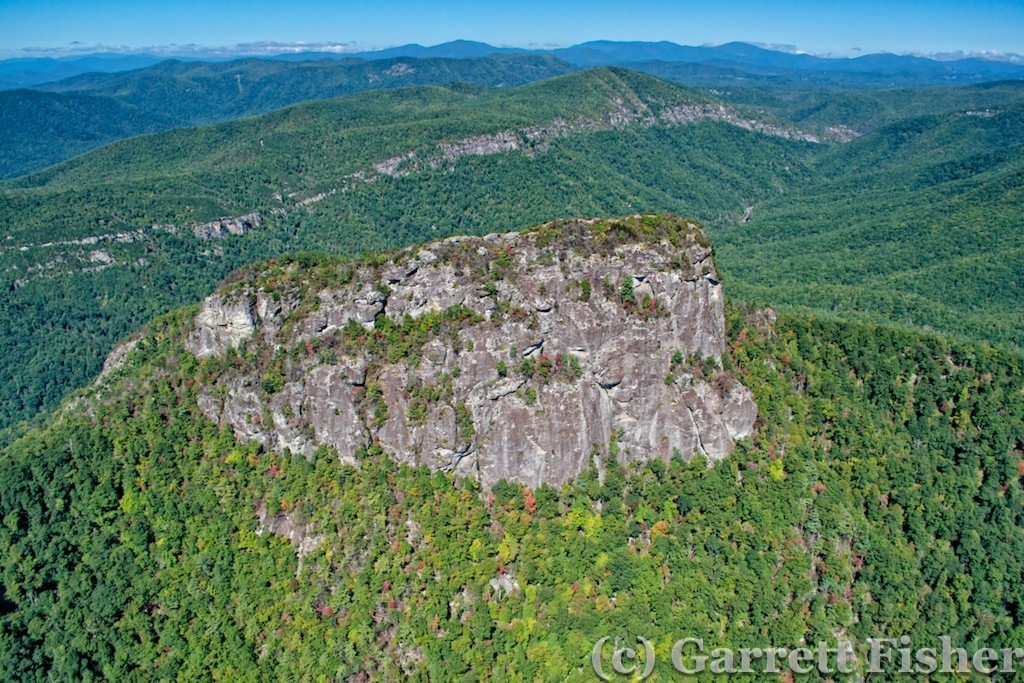 After Linville, it was a short haul to Grandfather Mountain, where I also videoed flying around the peaks. The summit is 5,946’ elevation, and it’s a rather long mountain, with a profound prominence being right on the Blue Ridge. I ran into a rotor on the lee side, with some involuntary descent, followed by the good old elevator pushing the plane back up. 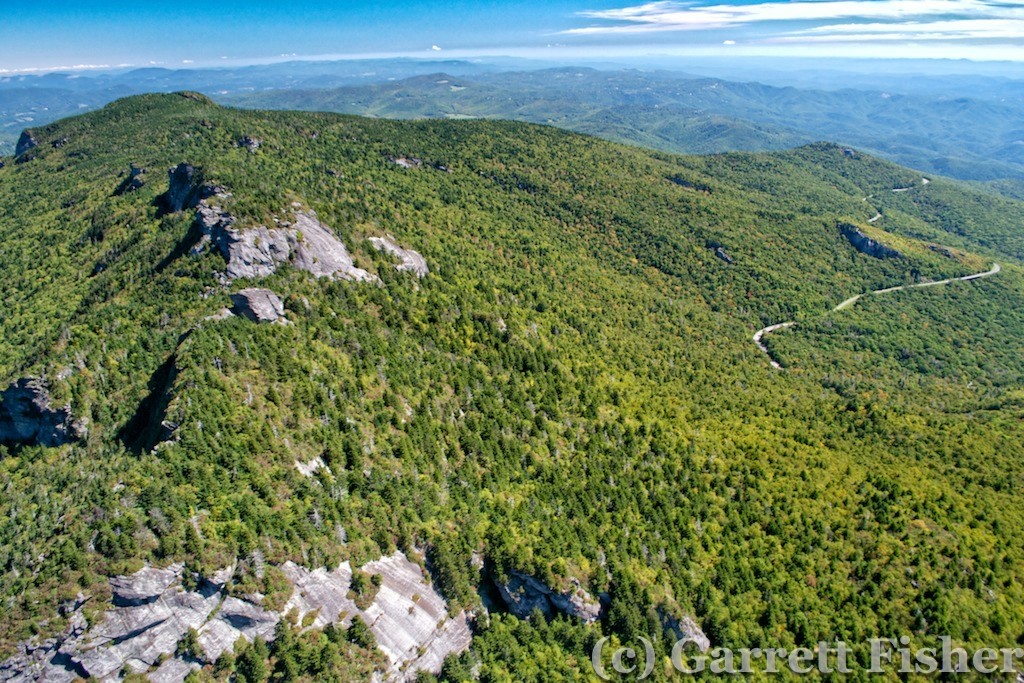 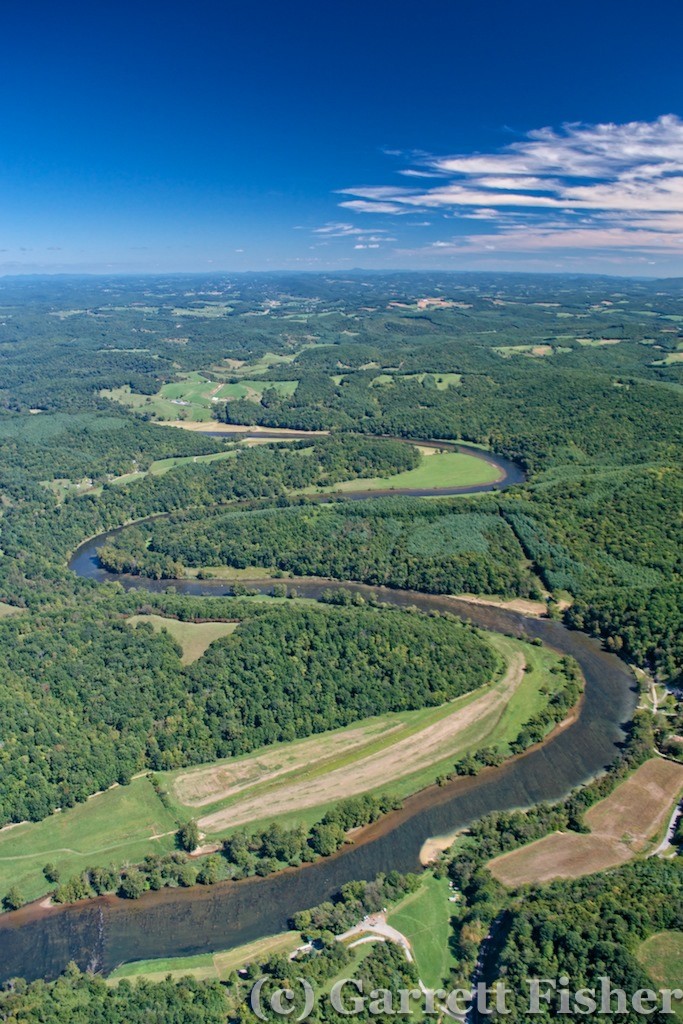 The Virginia highlands were quite pretty, as they are from the car on I-77. The New River winds back and forth relentlessly through the terrain for an amazing amount of time, taking longer than I expected to set up the shots and document. Fuel was a necessity at Twin County airport in Hillsville, VA. A week prior, a friend from WV had called concerned I had crashed my Cub near Hillsville because “it was a yellow plane.” Right. Thinking of her as dramatic, I lectured how not all yellow airplanes are Cubs, and not all Cubs that crash would be me (I have never crashed). Talking with a guy at the airport, it was a Cub that crashed. He was scud running, trying to get from OH to NC, entered fog, and nosed into the trees. At least he is alive. Inside the airport, I looked at the wall map and realized there is no way I will make WV. To make best use of my time, I headed SW back to Blowing Rock to catch the BRP now, and the weather went to pot for photography. High clouds and haze rolled in, messing up the lighting, so it was a good decision to abort after Blowing Rock.

The weather was still supposed to be nice the next day, and going to bed, it was forecast to be 47% sky cover in CLT and 9% in AVL, so I planned on hitting up the BRP and the peaks over in the Smokies and Balsams again, this time in sun and clear sky. 10 hours later, CLT is 100% clouds and rain, and AVL is mostly cloudy. I do have to say that the weather in Colorado is much easier to work with than here. Nobody knows the next time some clear air will blow in.