After two months of maintenance downtime, it is finally time to fly again! All of the problems I was battling out West culminated in a need to take the cylinders off the engine, replace rings, clean the entire valve system, replace a few parts here and there, and put the whole thing together. In the process, a host of parts get verified, repaired, replaced, or updated, culminating in the final product: a top engine overhaul. Some of the original magneto problems where made worse by flying above 12,000 feet for the entire winter, resulting in very cold temperatures on the top end of the combustion chamber. That left extra carbon, which messed with the valves, and that’s the story. It is amazing that I have had five months of maintenance downtime since January 1, yet I have flown more so far this calendar year than any in my flying career.

After the airplane was in one piece and inspected, the weather took a turn for the worse…….for a few weeks. The summer had featured a remarkable quantity of cold fronts and clear air, unlike anything I had seen in a decade of living in the Southeast prior. Once the airplane is together, the cold fronts stop and the 90+ degree weather with haze began. Sigh.

We finally had a cold air damming regime, where a mid-Atlantic high pressure zone pumps cold and damp air against the east side of the Appalachians, where the air is generally cool and clear with clouds. Except…. it wasn’t… it was misty and hazy. Today was supposed to be sunny and into the 80s, despite the morning cloud deck, so I was debating between going to the mountains or not, to see if I could see some of the peaks with clouds around them.

It was a debate between my intuition and my logical processing. My intuition strongly suggested flying, as it was a perfect scenario of receding moisture, quite likely to have an ideal mix of active, texturized clouds around the highest peaks in the East. Logically, I was not in the mood to spend 6 hours of my day for nothing. I set off with a solid cloud deck over the airport, and contented myself fiddling with my GoPro in the cockpit for the first time.

After 50 minutes of flying, it was evident that I may have made a mistake. The atmosphere was getting more opaque nearer to the mountains, and my hoped for clear mountain air did not seem to be a reality. The clouds looked to be wedged up against the terrain, terrain I assumed was the flanks of the Black Mountain Range (highest in the East Coast). I thought that was that, a dull day.

As I continued over Marion, NC, I noted some sunshine toward Linville. Knowing that weather reports indicated partly sunny conditions in Asheville, I began to turn toward the brighter areas, only to be greeted with a 2 mile wide hole that opened in the clouds above me, over Lake Tahoma. Unsure if I wanted to waste the gas climbing only to see nothing, I finally decided to make a go of it. Worse case, I see some pretty clouds and go back down. 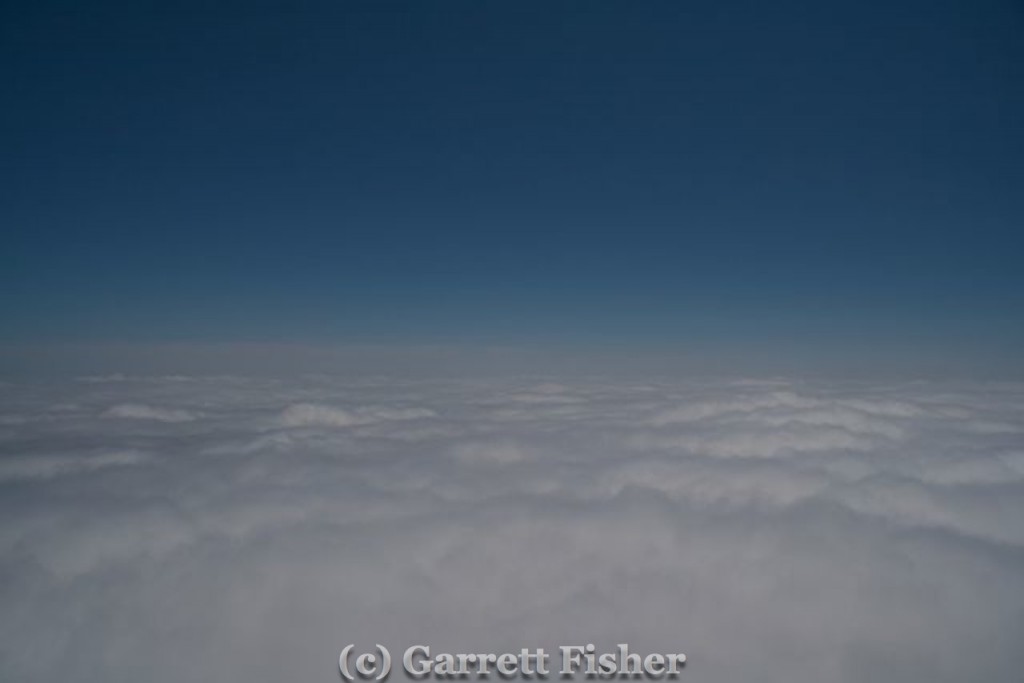 I began a steep climb, and had to do some canyon climbing maneuvers (a Chandelle, effectively) to maximize climb while turning to stay out of the clouds. It was legal, and it was tight. Two thousand feet later, I got to the tops at 4,000’ above sea level. With a grin on my face, I realized that clarity at 4,000’ meant that the Black Mountain Range, at 6,000’ to 6,674’ elevation, would be visible. I turned the GoPro on and headed west for a few miles until I could see what the conditions were. 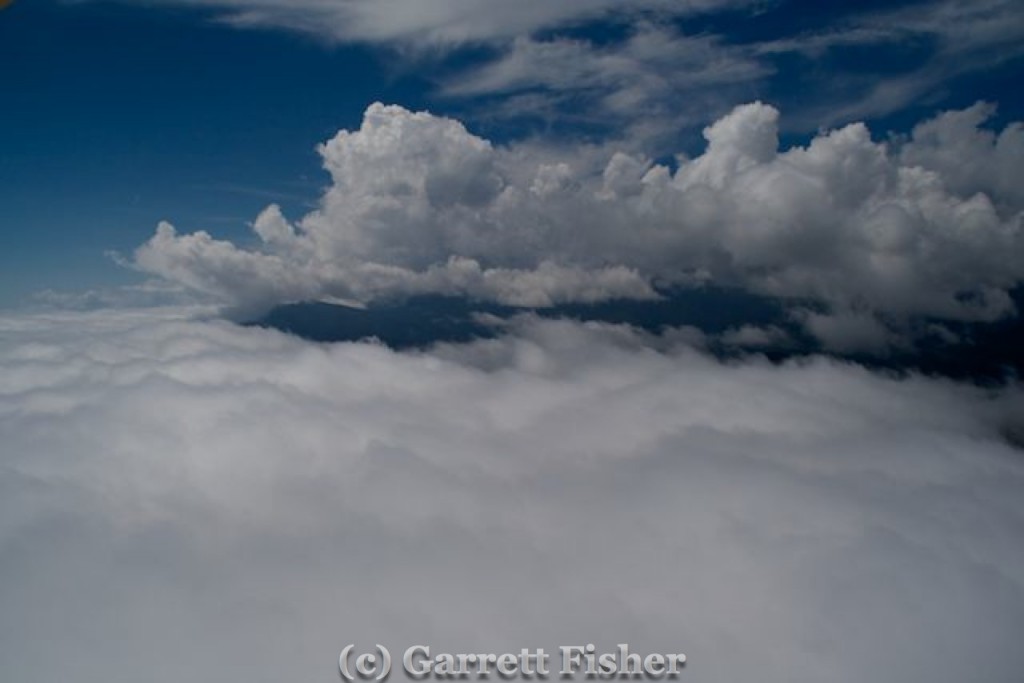 Mt. Mitchell Is In There Somewhere

It was perfect. I had confused the mountainside down in the soup as being the sides of the Black Mountain Range, when it was the side of the Blue Ridge Plateau. The outcome was unquestionably ideal, texturized clouds actively swirling around the peaks, coming and going, twisting and changing, sufficiently legal to wedge through and around yet complex enough to be interesting. I was unsure if the peaks themselves would be visible, or if I would merely be photographing the mountainsides. Either was fine with me, it was the story I wanted to record for two upcoming books: one on the 40 peaks over 6,000’ in the Southeast and one on America’s favorite drive, the Blue Ridge Parkway.

As I weaseled around the clouds and gained altitude, Mt. Mitchell and the other peaks in the Range were visible, and I could barely get to the other side. I wedged through, photographing the entire time, making multiple passes around the clouds and terrain, up and down both sides of the Range, and then over to Craggy Gardens on the Blue Ridge Parkway. 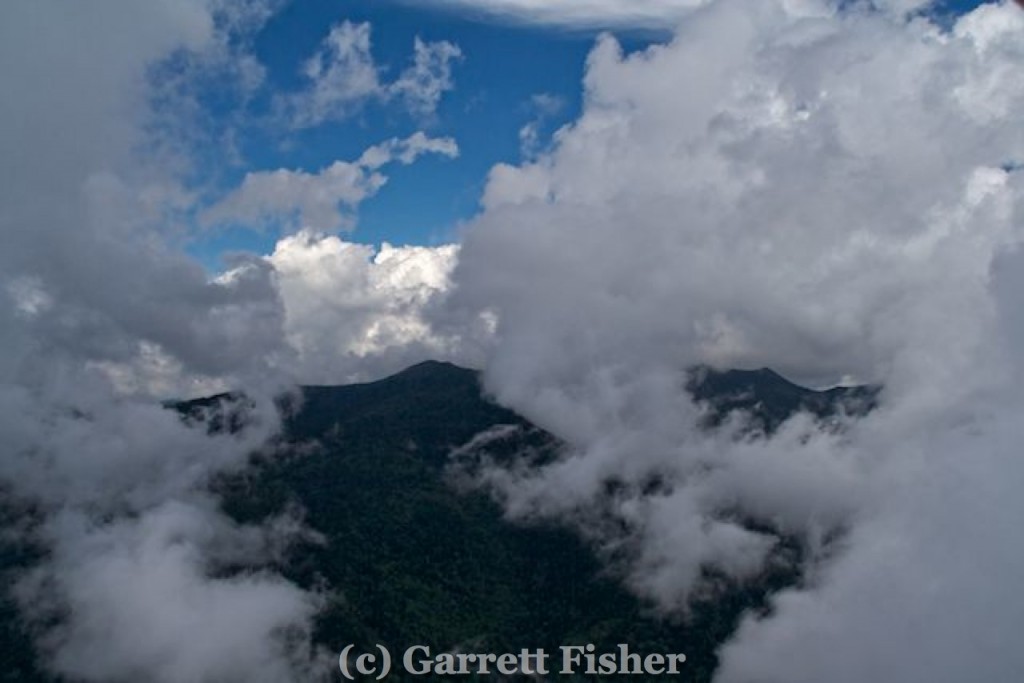 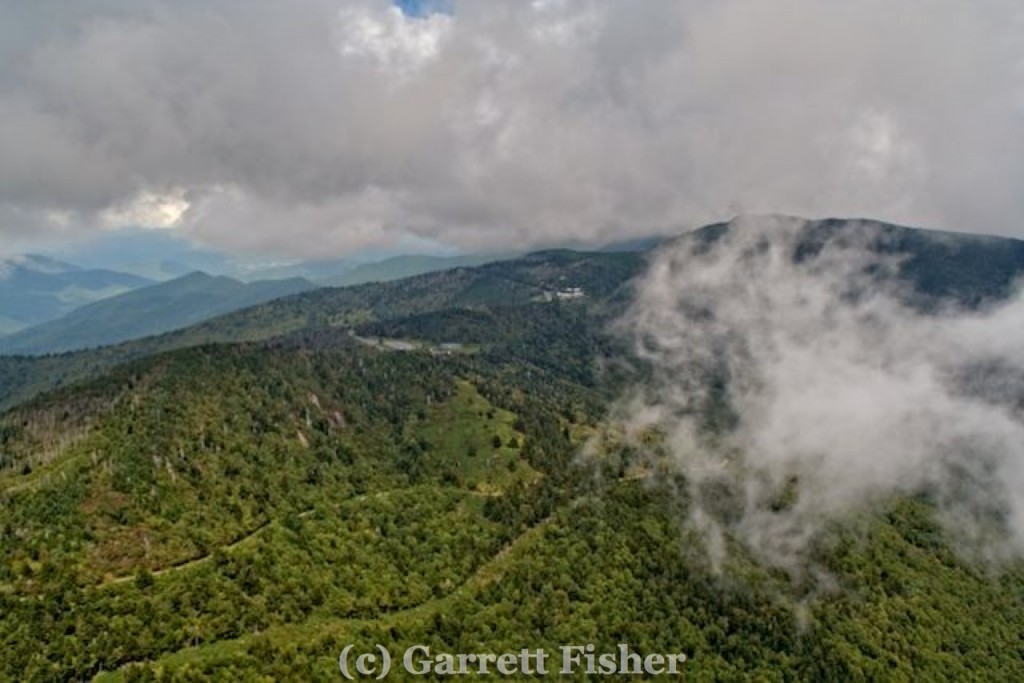 Found It! Mt. Mitchell, Highest Mountain in the US East Coast (6,674′ Elevation)

All of it was fantastic, a perfect representation of the fascinating weather a person is likely to encounter if they visit either the Parkway or Mt. Mitchell on the ground. Both are experiences easily doable most any time of year in the car, and many times a person leaves warm summery weather in Charlotte, only to find wickedly cold, windy, and foggy weather on the mountain ridges. These photos were better than I could have expected, and will make an excellent addition to both books.

Some very strong Canadian air is due to come in this weekend, so the typical “Carolina Blue” photography will commence in earnest as the fronts keep the air crystal clean going forward. The goal is to gather summer perspectives on the Blue Ridge, high Appalachian peaks, the New River, the Catawba River, and Carolina wine country. As the leaves turn, some of these places will be revisited for autumn views individually for those projects and also for another fall book under development. 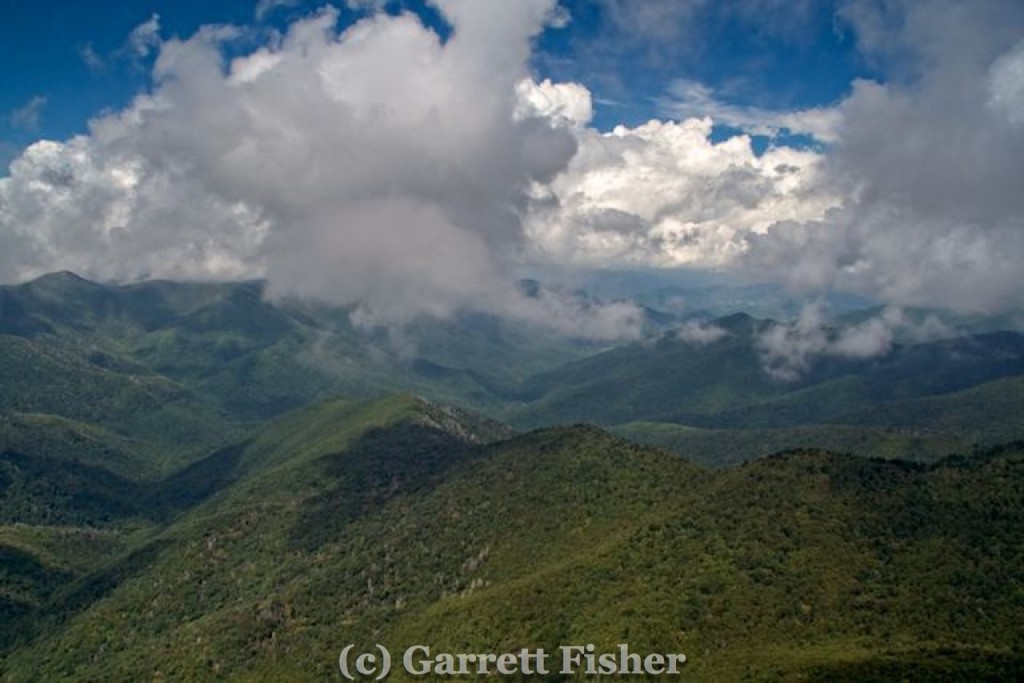 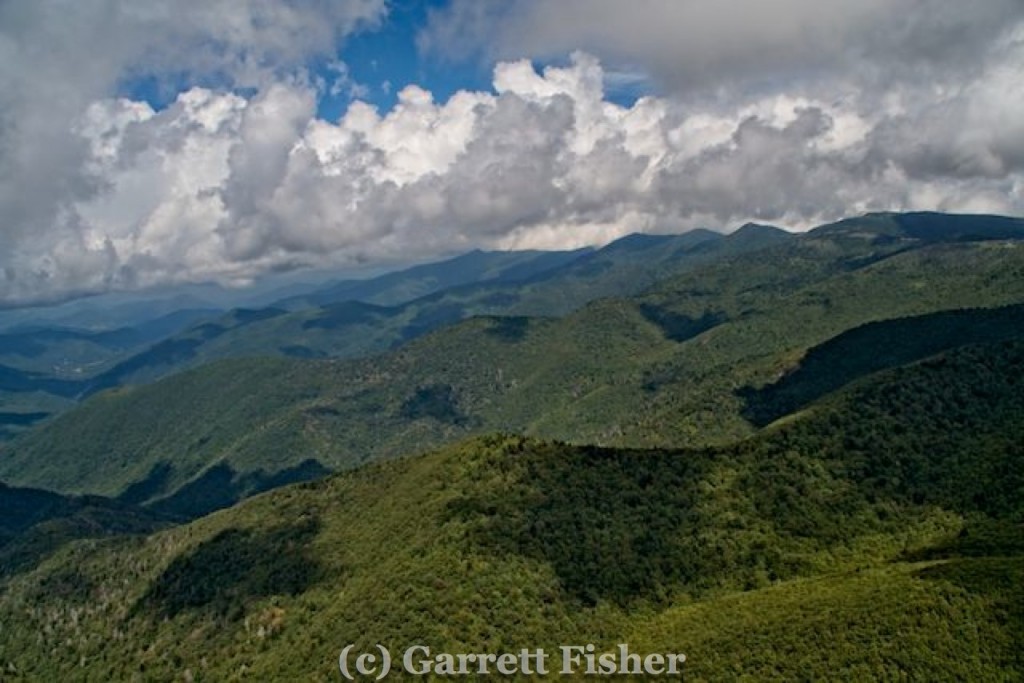 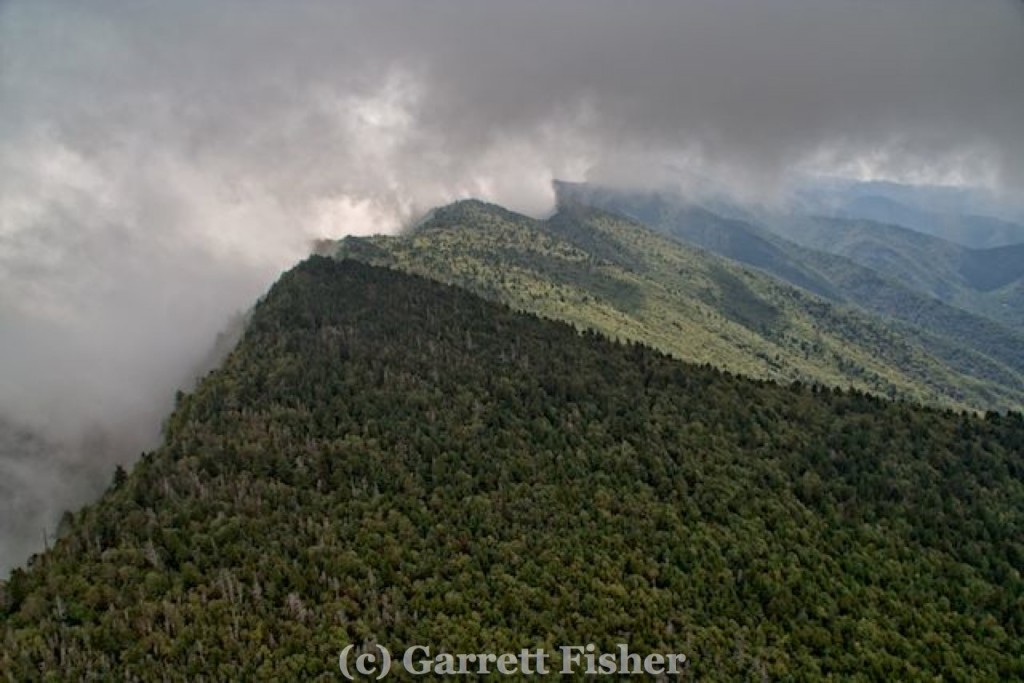 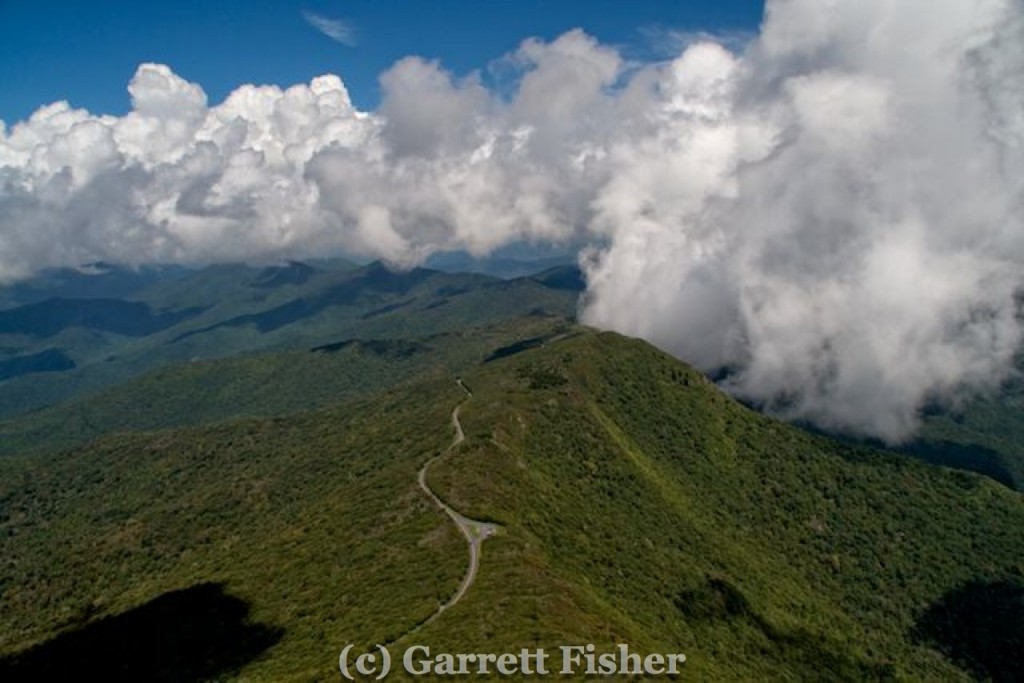