Just prior to arriving at Grand Teton National Park, the lens for my Canon camera broke internally. Needless to say, there was a 10 minute temper tantrum followed by a string of incredible cursing, another temper tantrum, more cursing, and maybe some more. I have a backup camera. In fact, it is newer and more capable except the lens is 18-55 instead of 18-200. I was about to reach the Mecca of my flying: Yellowstone, with geysers and a host of geothermal features, which require a close zoom to get. I was not happy, at all. 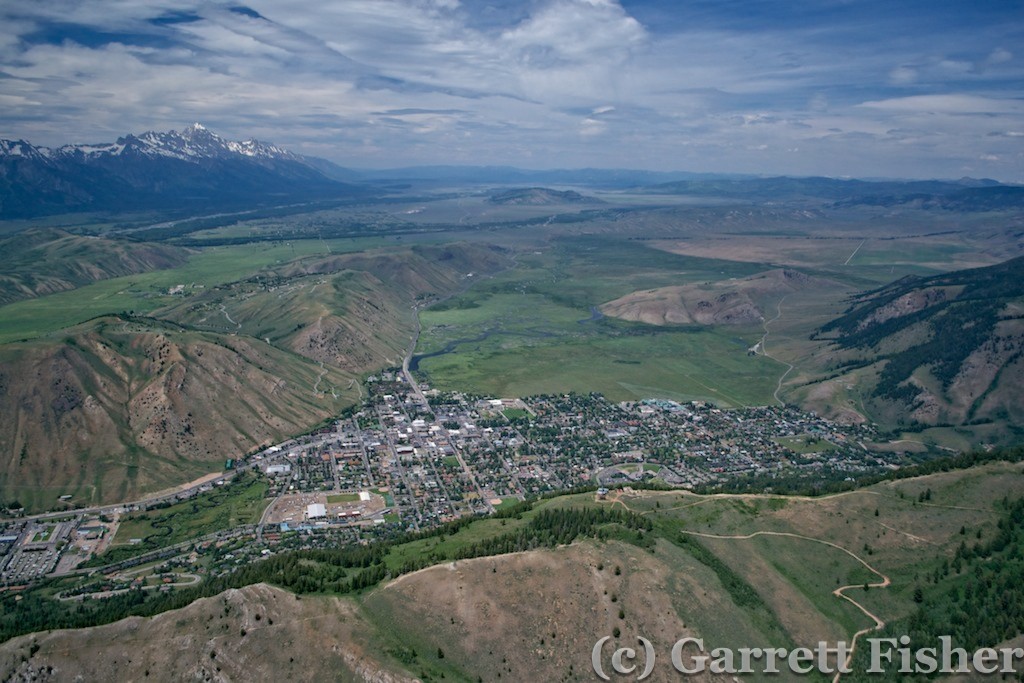 To add to my gloomy disposition, the sky went cirroform overcast, which is absolutely the worst kind of clouds to photograph in during the summer. Haze increased north of Jackson, and I was very, very pissy. When the sky has white clouds very high up, the thickness of the clouds is not enough to darken the sky. Instead of a dark blue backdrop, I have bright white skies with usually dark green ground cover (trees). This makes for an either/or scenario, where I can meter for the sky or the ground, but not both. This made for some very technical workarounds given the fact that I was flying, had a less potent zoom lens and there was an increase in haze.

I found some amusement in the fact that I was just about to photograph Grand Teton National Park. The park got its name from some French guys, who called the place “Les Trois Tetons”, meaning “the three teats.” Americans later added Grand, which is awfully close to the French wording for “big.” I always thought it strange to French people, who would see Americans naming a park in such a funny way. Maybe to reverse things so they are understandable, imagine a park in France named by Americans called “Parc National Big Teats.” I recalled this at a dinner party in Germany two years ago, namely because one of the attendees was French. Her husband heard my fascination with the linguistic faux pas and stated “Big Titty Park?” So, I photographed Big Titty Park, from an airplane. 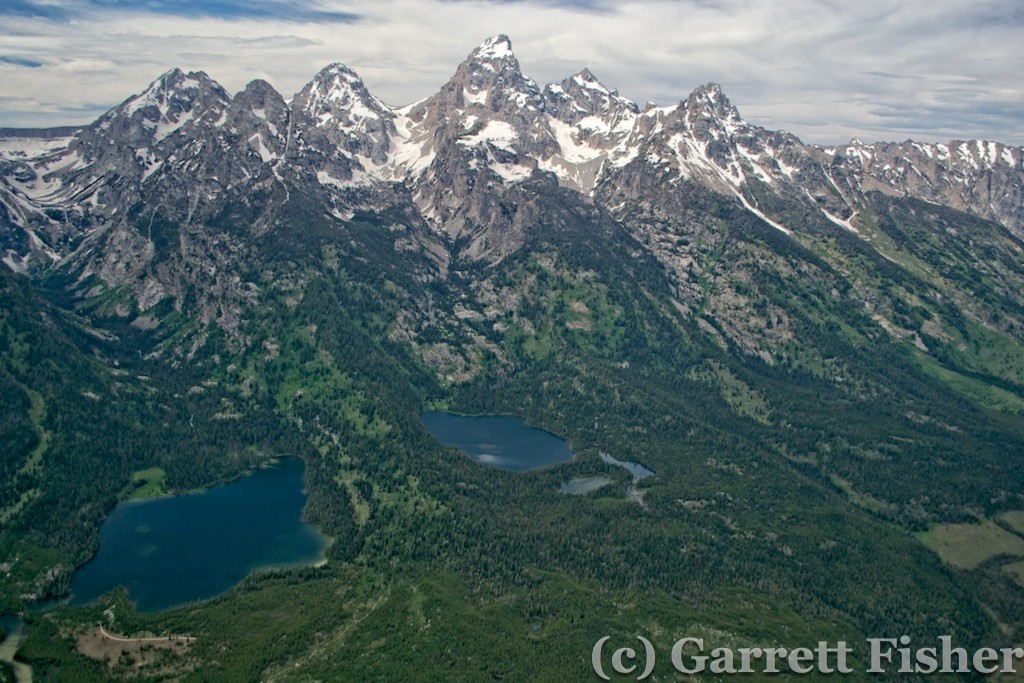 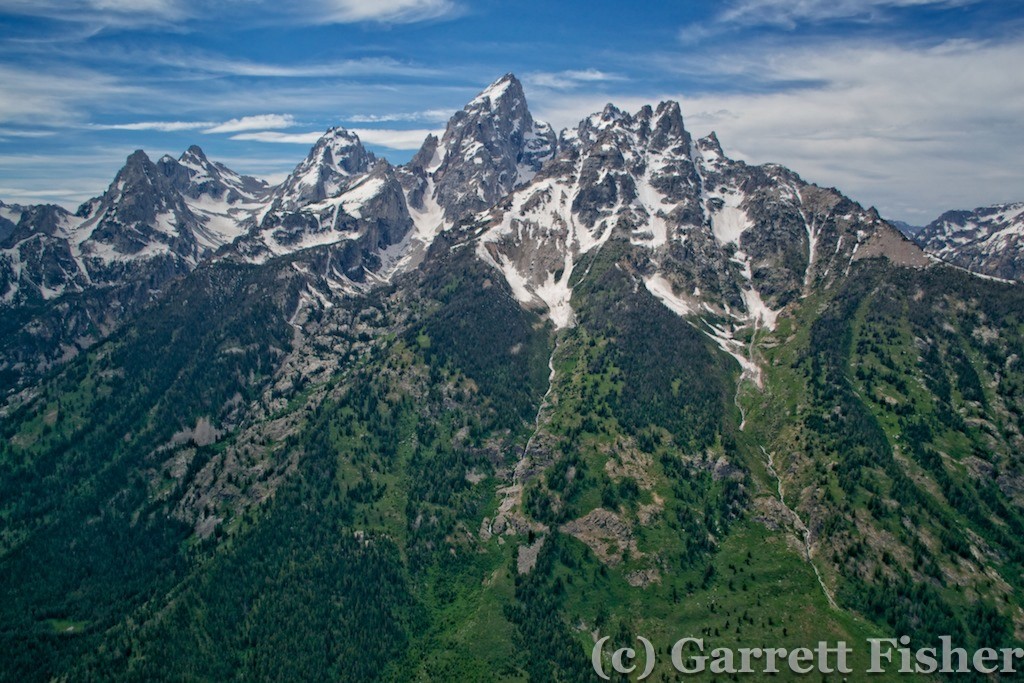 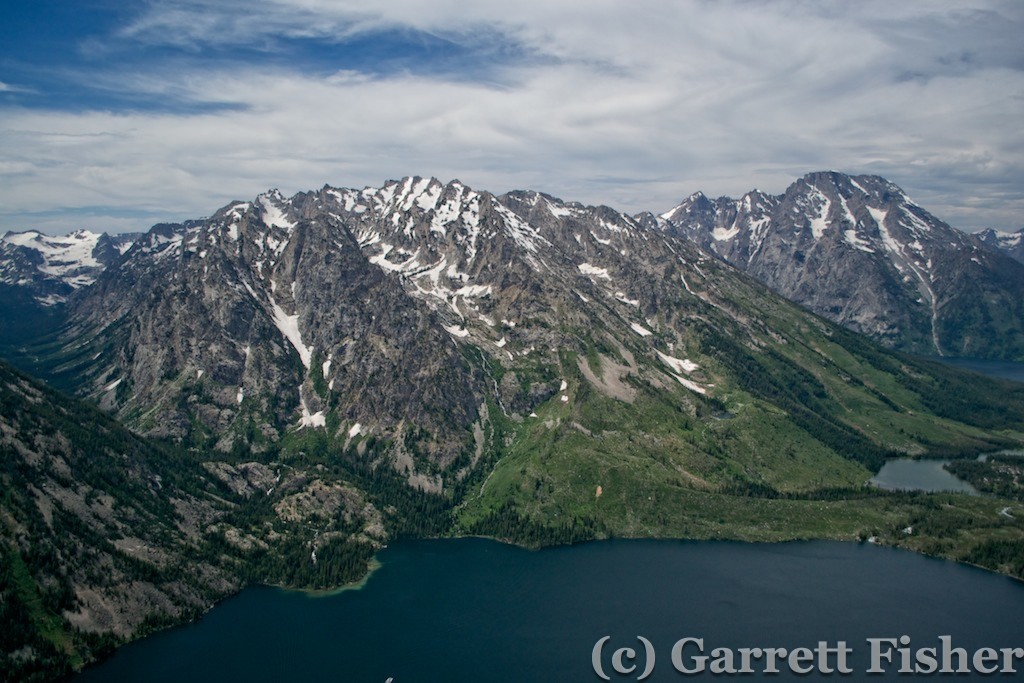 The problem was, those titties were downright mean to the airplane. Winds were about 35 mph and were coming off the peaks, beating the crap out of me as I tried to photo. Between the meteorological punching bag factor, the overcast skies, increased haze, camera improvisation, and controlled airspace over Jackson Hole airport, I was not enjoying myself. If I saw something pretty, it made me even more unhappy. To this day, when I read up on details of the park, and see the immense stunning beauty from the ground with indescribably clear air, it exacerbates the temper tantrum that started with the broken lens when I flew through in some awfully dull weather.

Grand Teton abuts the south side of Yellowstone. Yellowstone had been a childhood dream to visit. When I was young, I would look at national park books and fantasize about visiting all of them, something I still do when I see pictures of places I have not been. Yellowstone was the Jerusalem of them all – and here I was with a broken camera and stupid weather. I was cranky.

To be honest, most of Yellowstone really doesn’t look that amazing from an airplane. Had the sky been crystal blue, with some fall color and fresh dusting of snow on the peaks, I may have thought somewhat differently about it. There are some notable differences between Yellowstone and the surrounding regions. It is remarkably flat, well treed, and there are quite a few large natural lakes. That combination of factors really doesn’t exist elsewhere in the west. However, those combinations, without the right lighting and color, are quite dull. On this particular day, it was quite evident the damage done by the 1988 Yellowstone fires, as large burn scars still remained. I understand why the place needed to be preserved as a park; it just wasn’t doing it for me from the air. 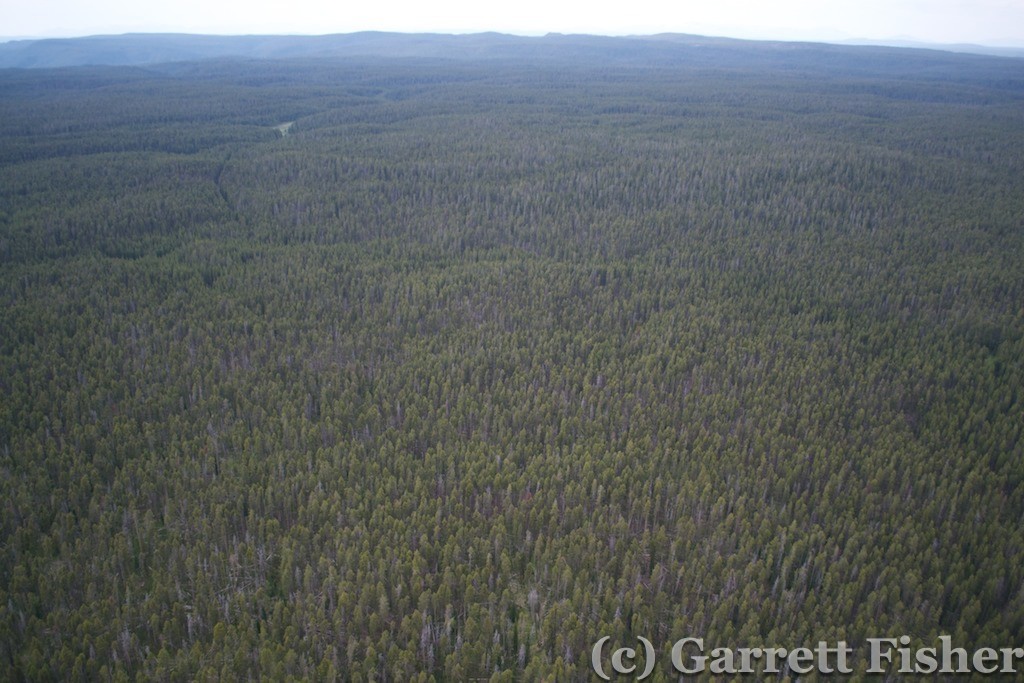 The situation got worse as I encountered various geothermal formations from the air. Absent the zoom lens, the photos were ho hum. Wind was howling, so I was getting knocked around a bit, and there would be nowhere to land if the engine quit. The combination was adding up to not be worth it. I was pouting. 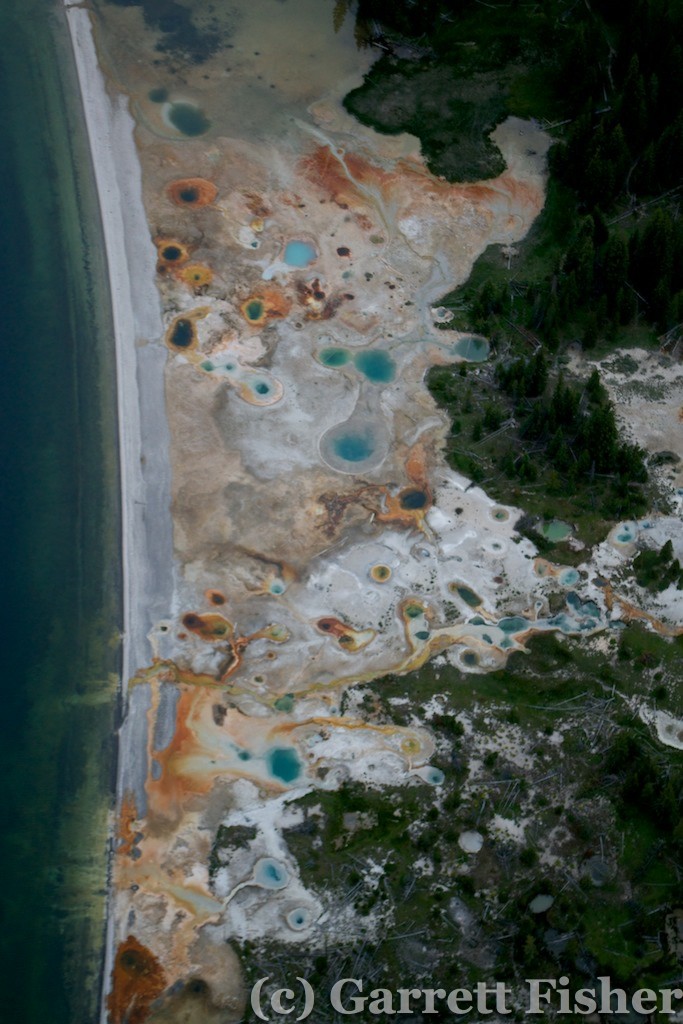 I pouted more when I came to an area with lots of little geothermal features, all too small to make much in the way of art and imagery out of them. Oh well, I am here, might as well photo it. Then came Grand Prismatic Spring. I knew it would be neat from the air, possibly worth it, and when I saw it, it was stunning. Pouting/temper tantrum gave way to religious glee and merry making as I could barely fit the whole spring into the photo on 55mm zoom. Amazing colors and texture, something I have wanted to photograph from the air for years. This made it all better, not only better, simply worth it. 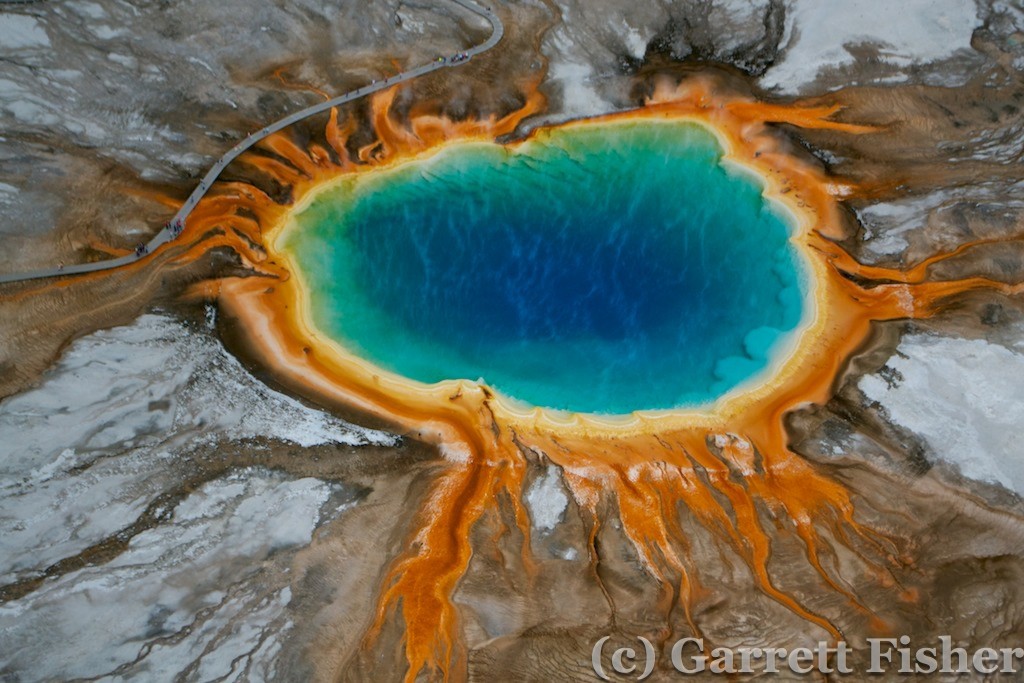 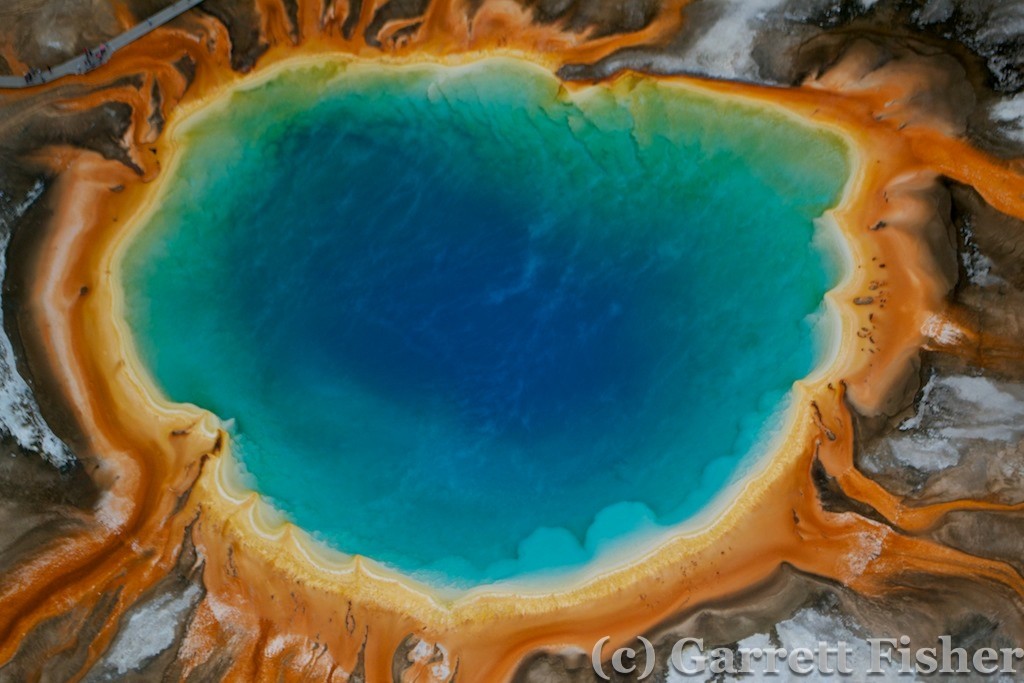 After Grand Prismatic Spring, there was nothing in the park worth photographing without a full zoom lens. My fuel situation was getting to be problematic if I planned on going anywhere far, so I opted for West Yellowstone airport, about 20 miles west. I flew in the direction of Hegben Lake, and recognized the terrain leading out of Yellowstone from an article I read, where a 7.5 earthquake in the 1960s let loose and a landslide killed some campers as well as sent 100mph winds down the valley. While Yellowstone is photogenic, someday the super volcano may destroy the atmosphere and kill us all.

It turned out the airport was in Montana. Fancy that, I knocked another state off the list. The only remaining ones to visit are LA, RI, VT, ID, HI, and AK. I wouldn’t mind all of them except Louisiana – silly state with Spanish-based law and the highest per capita Gonorrhea infection rate in the US. At any rate, I was too cranky to continue to Bozeman, so I crossed the park east and took the pass out along the US highway toward Cody. To be honest, the mountains were super dry and not appealing. Research has shown a prevalence of fires and even an F-4 tornado crossing the Continental Divide in 1987, though something about the whole range over there indicates that its just plain dry. The snow had mostly melted, yet there was no green grass, just brown and dead – not winter brown – dead brown. 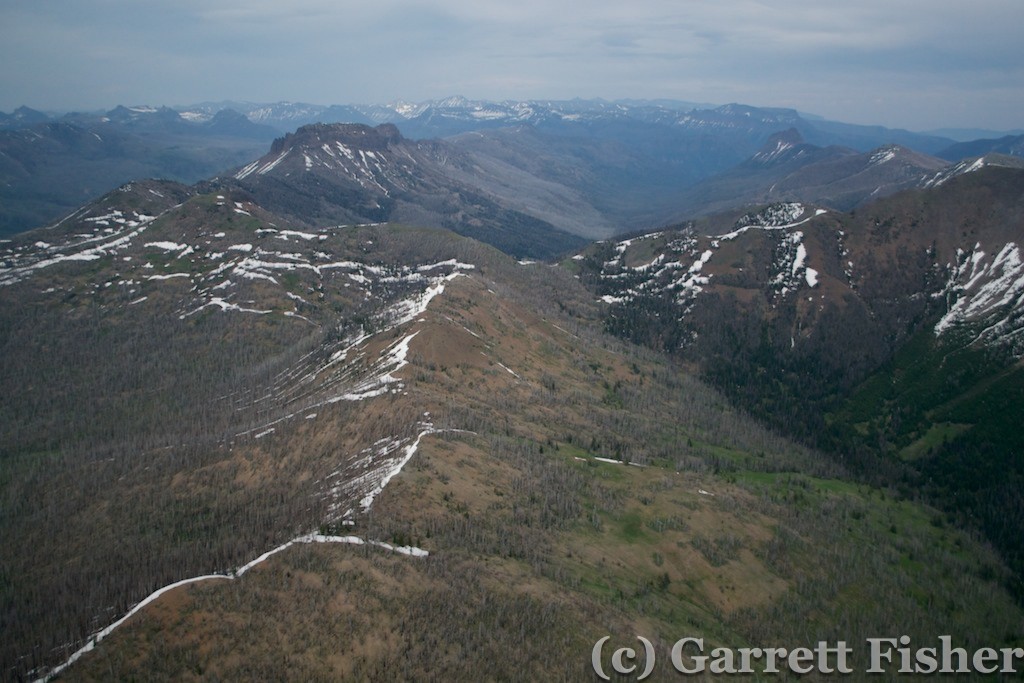 Cody, Wyoming was remarkably dry and dull as was the valley to the east heading toward the Bighorn Mountains. I was still pissy as I was spending time and money for what again, exactly? To view ugliness? I took a photo, just for spite, to document the misery I was facing.  Instead of descending to view the terrain like I usually do, I hung out at 9000 feet so I wouldn’t have to climb back up again to cross the Bighorns. 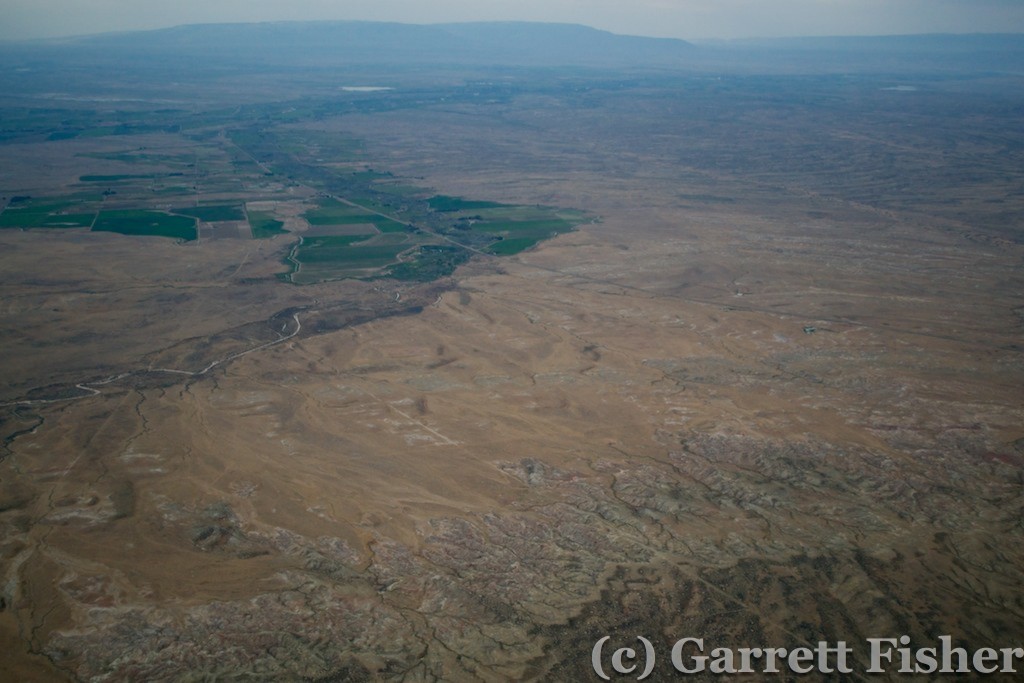 The Bighorn Mountains looked like they sucked from a distance. Much like the mountains of Nevada, thousands of feet tall and still burnt dry, these mountains looked the same. The day was coming to a close and my intended point of stopping was Buffalo, WY, on the other side of the Range. Maybe I was just tired, I thought. Maybe its those stupid clouds and haze. Who knows?

As I got to the foothills of the range, I found some neat canyons. Ok, I guess I’ll get the camera out. The further I went, the clouds abated and air quality improved a bit. Then the terrain got interesting, showing that these mountains had character, a unique rock texture not present in Colorado or the Wind River Range. I suppose that is worthy of a photo. I opted not to cross the highest peaks, as I fatigued with steep mountain flying. In retrospect, I wish I would have, as I found out there is a glacier up there. Nonetheless, the thickness of the forest and the depth of greenery increased dramatically on the east side of the range. Desolation gave way to thick spruce forests, rock formations, and pleasant forest service roads with a perfectly spiced mix of campers enjoying nature. Water seemed to be flowing off the range, and the closer I got to the flatlands on the east side, it remained green. Dare I say it, it was quite beautiful. 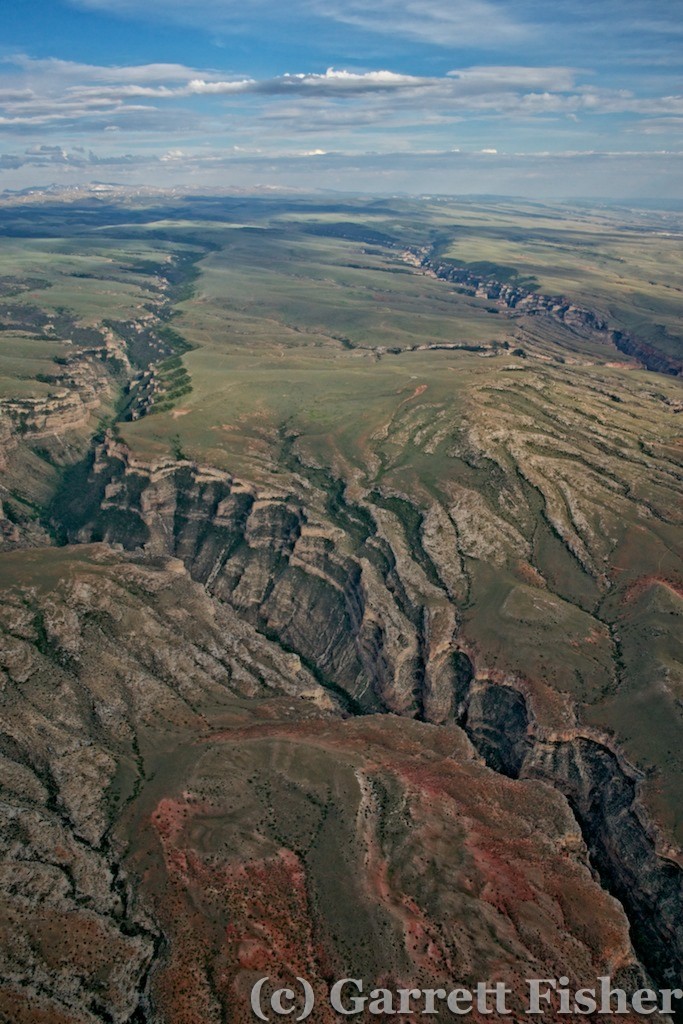 Oh Fine, That is Pretty – West Foothills of Bighorn Mountains 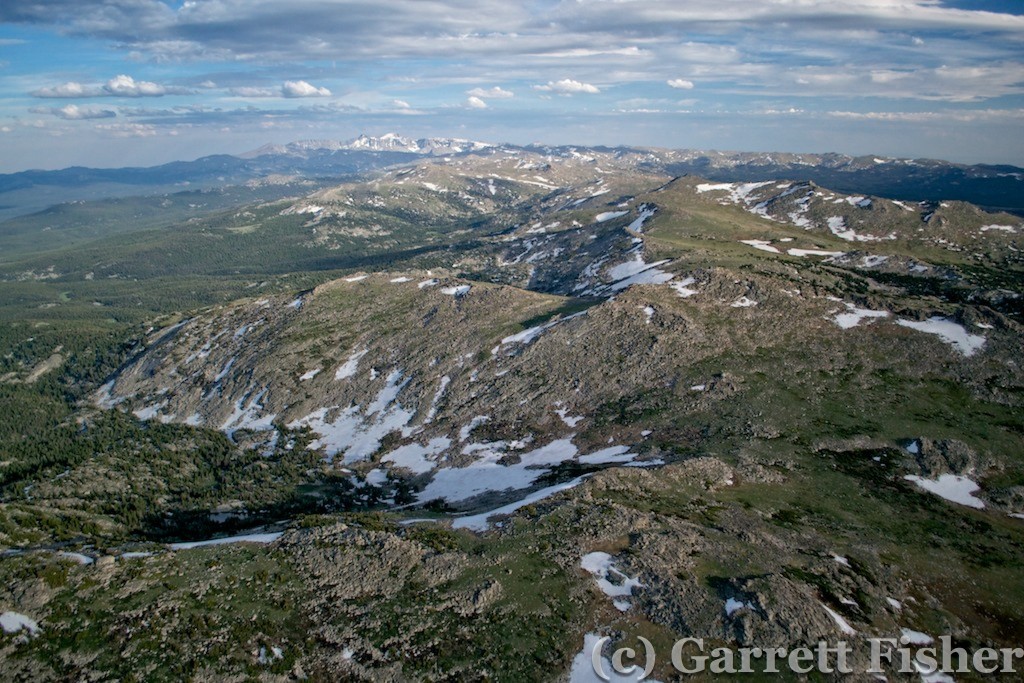 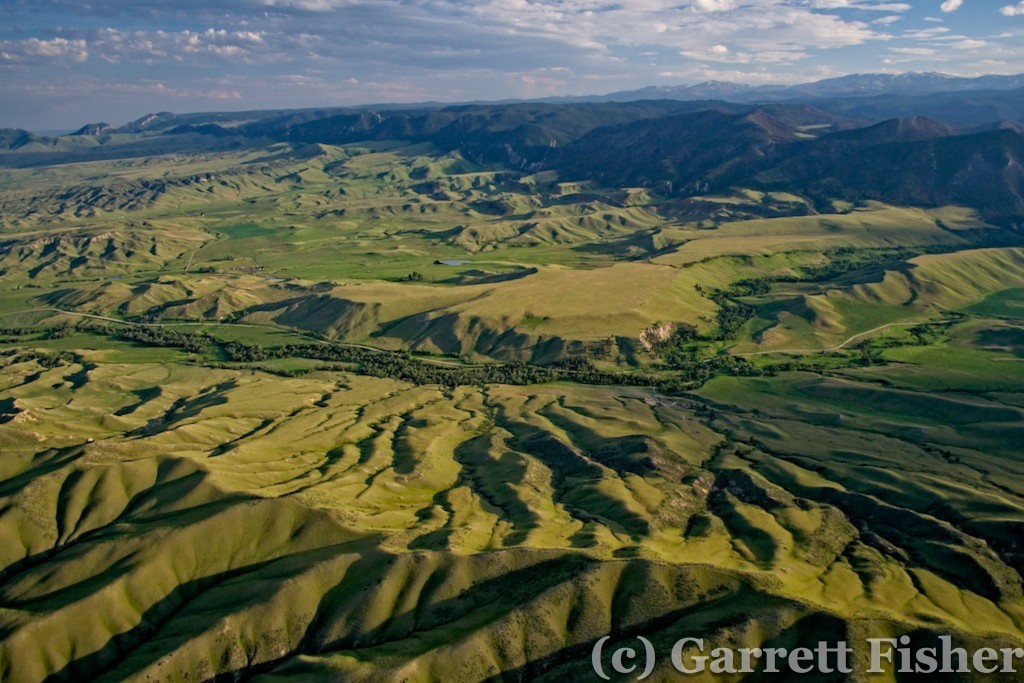 The descent into Buffalo, WY was textured and pleasing to the eye. Air temperatures were balmy but not too warm, and the approach into the airport was nice. At landing, an elk was running alongside the airplane, fortunately not in front of it. It took some time to find fuel, in fact, not until morning. There was a fuel truck and disassembled fuel apparatus, but no self-service. I eventually found a new self-service station in the morning, obviating the need to fly 15 miles north out of my way to fuel in Sheridan, WY. The airport was a bit of a ramshackle affair, with some adequate attention to pilot needs. Though unattended, the lounge door was unlocked, so I could wash up in the bathroom and leave my electronics for an overnight charge. I pitched the tent in the grass behind the airplane and went to sleep with the serenading sound of I-90. 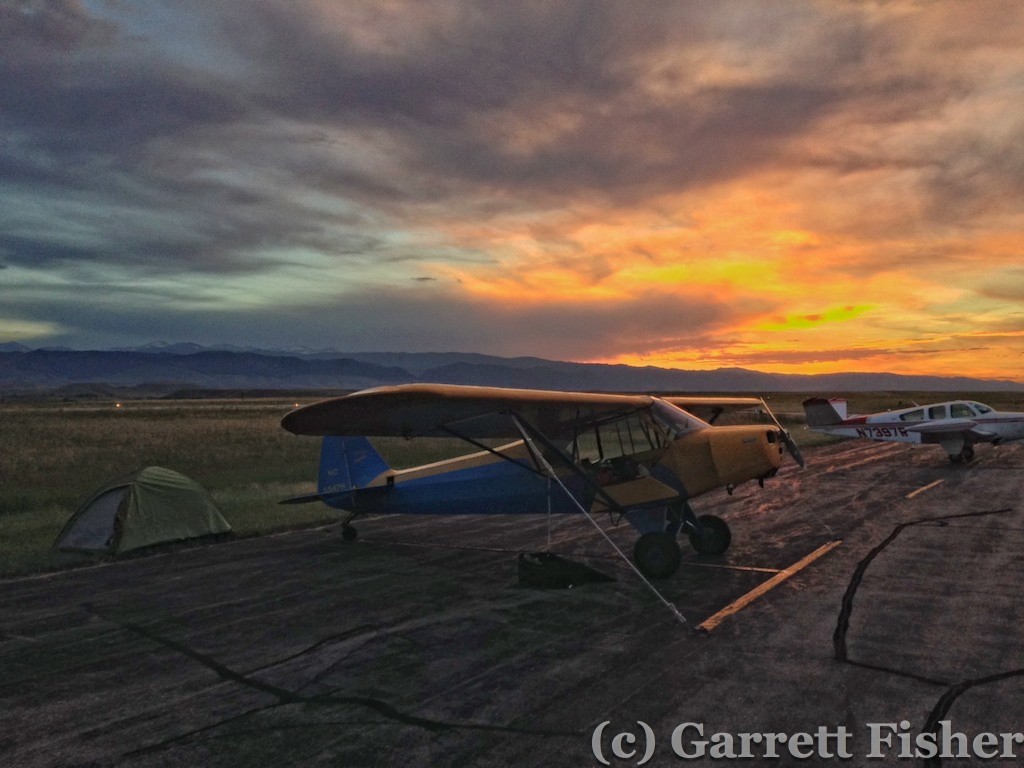