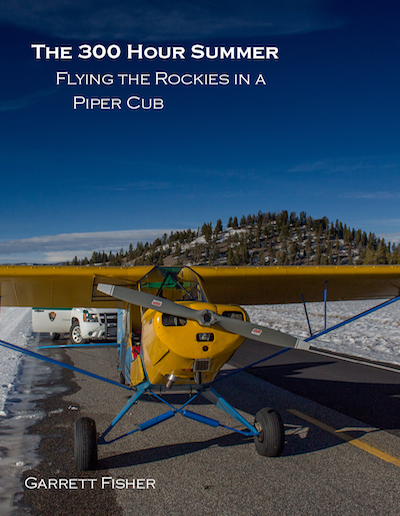 Yes, that is the Cub, on a road, with a law enforcement vehicle behind it.

When Garrett Fisher decided to move from the coast of North Carolina to Wyoming, he thought it would be a normal residential move, with the added spice of fulfilling a dream living on an airpark south of Yellowstone. Taking his 1949 Piper Cub with him, he set off westward from the Atlantic Ocean in late winter, thinking that the third crossing of America in the airplane would be like the other two: tedious. Twice he barely lived through the experience, eventually limping into northwestern Wyoming to commence what turned out to be an overload of flying the following summer, covering enough miles at 70mph to circle the earth. Taking his underpowered airplane to the highest peaks of six US states, he chased every glacier in the US Rockies, an abundance of national parks, profound wilderness, towering mountains, strong winds, and foul weather, all with an airplane that had no heat, no starter, no transponder, and one fuel tank. From the convergence of Alberta, British Columbia, and Montana to the border of New Mexico, from the Montana Prairie to Wyoming Range to the canyons and Great Salt Lake of Utah, the adventure was an odyssey of intense Cub flying, most of it along the highest mountains and ridges possible. While it was supposed to be a simple move, it turned into the gateway of a story that ended in a way not even the author could see coming.