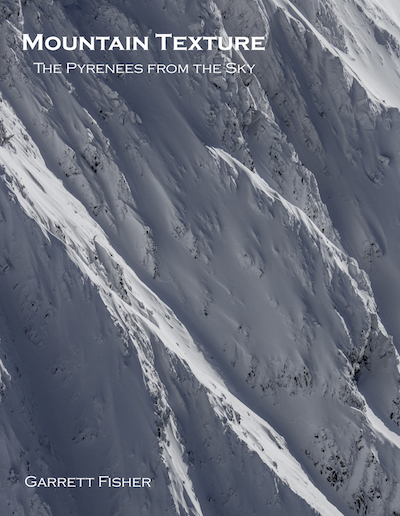 In his prior aerial texture exploits, Garrett Fisher had to cross America multiple times in pursuit of patterns and mathematical textures, as seen from the air, to find enough of what he was looking for to write a book. After an extensive amount of time attacking the Pyrenees of France, Spain, and Andorra from the air, a manifesto to aerial texture resulted, partially a product of the sheer beauty of the region and partially of the author’s relentless fixation on capturing unexpected perspective. Forming a natural boundary between Spain and France, the Pyrenees region encompasses multiple climate zones, from desert to glacier to Mediterranean, well-watered, and semi-arid, with an incredible variety of geology, agriculture, and human impact. Containing 205 images, the book is a monument to the unexpected in an area considered as one of the few near wilderness areas of Western Europe.