As mentioned in my prior article, I fly an antique family airplane originally manufactured in the 1940s, presently in Spain after years of antics in America and Germany. When I first came to Spain, I wasn’t sure what to expect when it came to general aviation (“general aviation” refers to small planes, whereas “commercial aviation” is associated with airline travel). At first glance visiting La Cerdanya airport before the move, I saw airplanes taxiing, taking off, and landing just like they do everywhere else in the world, which lent the conclusion that things would be substantially similar. That is an easy conclusion to come to about a lot of things in Spain. Watching traffic flow on highways and people in the act of most routine items, things look manageable enough…at a distance. Spend any time driving, living, or doing business here, and one finds out how much of a hilariously chaotic place the country can be. The same holds true in aviation.

What I saw on that first day visiting that looked normal was really a manifestation of the Spanish mentality of not caring what others are up to. In America and much of Northern Europe, there is a cautious eye toward other people that do not follow important rules; we view it as a concern of a civilized and safe society. Spain? Nobody in Spain cares what anyone else in Spain is doing. When it came to the airport, that meant that “not caring” ended up translating into an American style freedom when it came to aviation.

It is not to say that aviation in America is disorderly. Rather, America has legislated specific elements of aviation that are freer than anywhere else on earth – both in legal obligation and fees. There simply is no need to overregulate pleasure flying, and therefore it isn’t. Spain, on the other hand, in its ubiquitous tardiness and care free mentality, allows a similar freedom by virtue of disorder, and that is what attracted me to the place.

While in the rest of the civilized world airports tend to have fuel, it is best to call here in advance. This is first to ensure that public aviation information is correct and fuel facilities exist, that the pump is not broken, and that someone will be there. It is also best to ask the local facility if they feel things like flight plans are needed, as referring to national regulations does not guarantee success. Each locale has their opinion, though it tends to lend toward the permissive.

Most things about aviation in the Western world are very literal. If the map indicates an airport is controlled airspace, then one must get permission from the tower to enter the zone. On one flight, I called a tower on the radio and consistently got no response. I then switched to Barcelona’s frequency, which handles international traffic, and they told me to hold on while they called the tower. A few minutes later, “Nobody is in the tower, so just fly in there and look out for traffic.” After refueling, the desk attendant demanded my flight plan for departure, for which I wittily replied, “If nobody is in the tower, then I don’t need a flight plan.” He paused for a second, shrugged, and said: “I guess not. Enjoy your flight.”

Eventually, my travels and photography took me into zones where fuel did not exist, or it was too much of a flamenco dance of paperwork to purchase it.  Since I tend to linger while taking pictures, I need more time than normal over remote areas, and that presented a problem. I began researching official and unofficial airports and found that there are a number of legal and official airstrips that at one point or another were maintained and had facilities. Now, they are a patch of rutted dirt, yet they retain their registration and along with it the legal right to land. On the other hand, agencies like the forest service maintain strips in rugged areas for various reasons (mostly firefighting). These are maintained, not on the map, and illegal to land on. I am told Spanish pilots land on the illegal nice ones anyway, and ignore the rutted ones, though stiff fines await if caught landing on the safe but unofficial airports.

I decided to use some of these crappy yet legal runways to land and transfer extra fuel that I took in the passenger seat area. My aircraft is designed for some rugged landing surfaces, and I have made liberal use of those capabilities landing in the middle of nowhere. The only thing that confirms I am not in Arizona is the lack of tumbleweeds blowing around. Many times I have sat on one of the dusty airplane tires, eating a sandwich I brought with me, pondering a strong breeze, swaying weeds, and whatever desert like scenery is around me. How did I get from rural New York to here, with this airplane? That is a question I still yearn to answer. 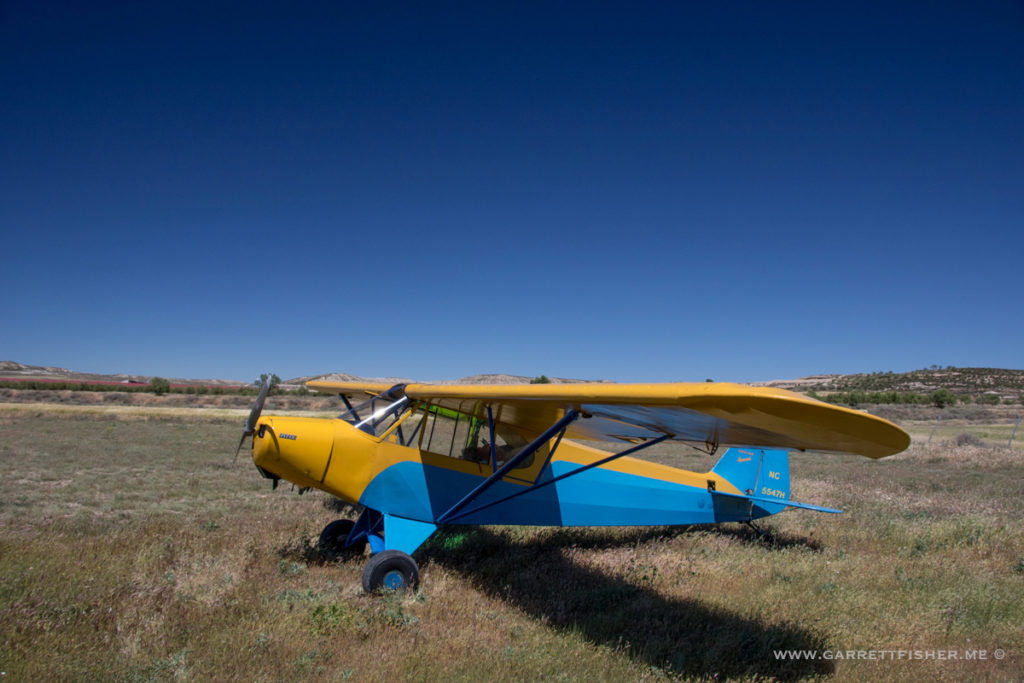 Despite a very long list of amusements that can be tiring, I have found textures and artistic beauty in Spain that I have not come close to seeing anywhere else. I now understand why many of the great surrealist painters were Spanish, as some of the countryside, tended to by harsh natural forces and centuries of Iberian tradition, can look like a surreal work of art. I don’t think these painters had to look very far for their inspiration, as the landscape here is in a world of its own. I used to be far thriftier with my photography whereas I now average 700 photographs per hour due to nonstop beauty. 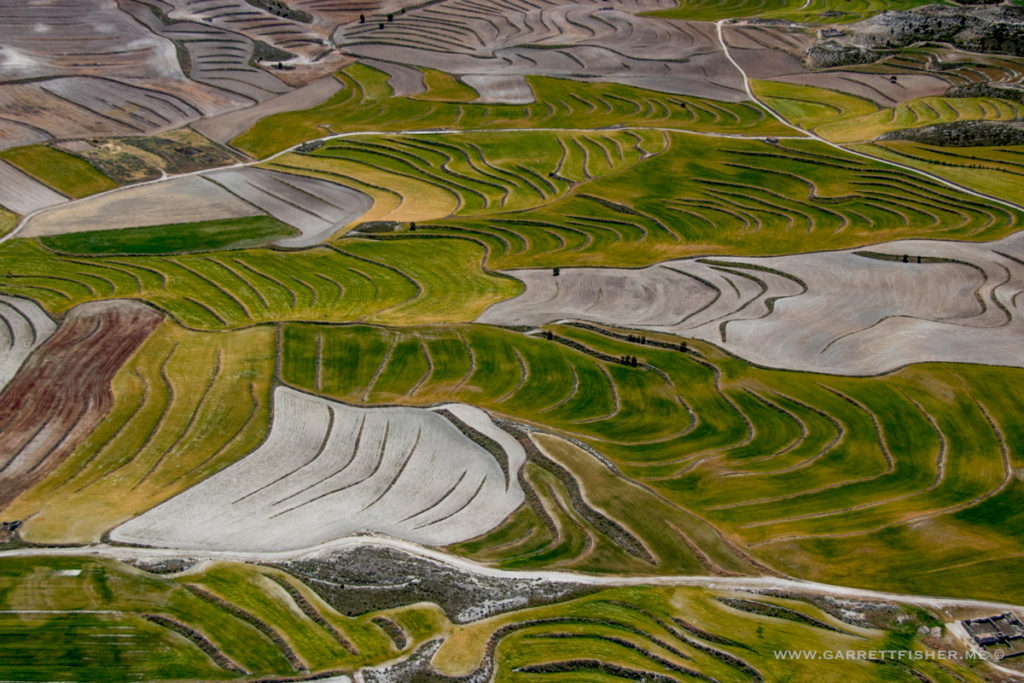 This section of the Iberian Peninsula features weather that I have to date not experienced. Whether it was New York, North Carolina, Colorado, Wyoming, or Germany, there was a commonality in that weather systems were dominant. A cold front almost always meant clearer, drier air, and summer was usually better than winter. Here, things are more like California, where it is not so much waiting for a specific weather system as it is a question of what location I wish to visit. The same storm system that makes the Pyrenees perfectly clear may entomb lower areas in fog, only 50km away. Or, that same clear day in the mountains may be a raging Tramontane wind on the French side of the border. Maritime weather is a near puzzle, as clear days in most of Catalunya may mean nothing along the coast, as Mediterranean air, with a connection to Saharan dust, has a mind of its own. It has been quite a learning experience to figure these things out, though in the end has resulted in amazing photography. 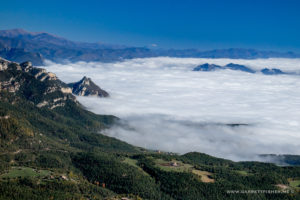 The whole experience has been a surprise on all levels, which has meant that I now take a distinctly Iberian approach to my flying: get in the plane and see what happens. As for what the future holds, my answer is a shrug.

I recently published my first book about Spain, “The First 100 Days: Flying in La Cerdanya.” It is available on Amazon USA, UK, Spain, and in other countries. 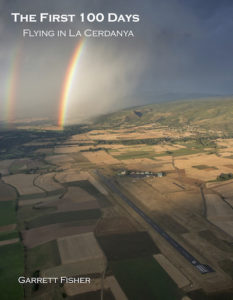 Using the most ill-equipped aircraft possible for such adventure flying, Garrett Fisher has based his antique Piper PA-11 Cub Special in the Outer Banks of North Carolina, the highest airport in North America in Colorado, an elitist airpark near Yellowstone, the busiest airport in Germany, and now a secluded hideout in the Spanish Pyrenees. In the process, he has flown to an exhaustive list of rugged and dangerous places in America as well as some of the most beautiful sites in Europe, amassing an enormous collection of aerial photographs. Perpetually clueless about what is coming next, he continues wandering in the airplane, blogging about his adventures at www.garrettfisher.me.