I made the decision to undertake the 14 and a half hour drive about a week before the event. I was not sure if I was up for the travel, having already attended the prior year, and wondering if I wanted an indentation of my truck into my posterior. In March, I drove 2500 miles to California and back from CO and then 32 hours of driving from CO to NC in June. What’s another 2,000?

The trip turned out better than one can imagine, in a masochistic kind of way. I got an email from my German friend 30 minutes prior to arriving, that he was very sick. Thus, I would not be staying in a small dorm, catching the German Flu. As nightfall approached, and after 14 hours of driving, I entered Camp Scholler, the official campground facility at Airventure. It has been said “You have not been to Airventure if you have not stayed at Camp Scholler.” I was about to learn the magnitude of that statement. 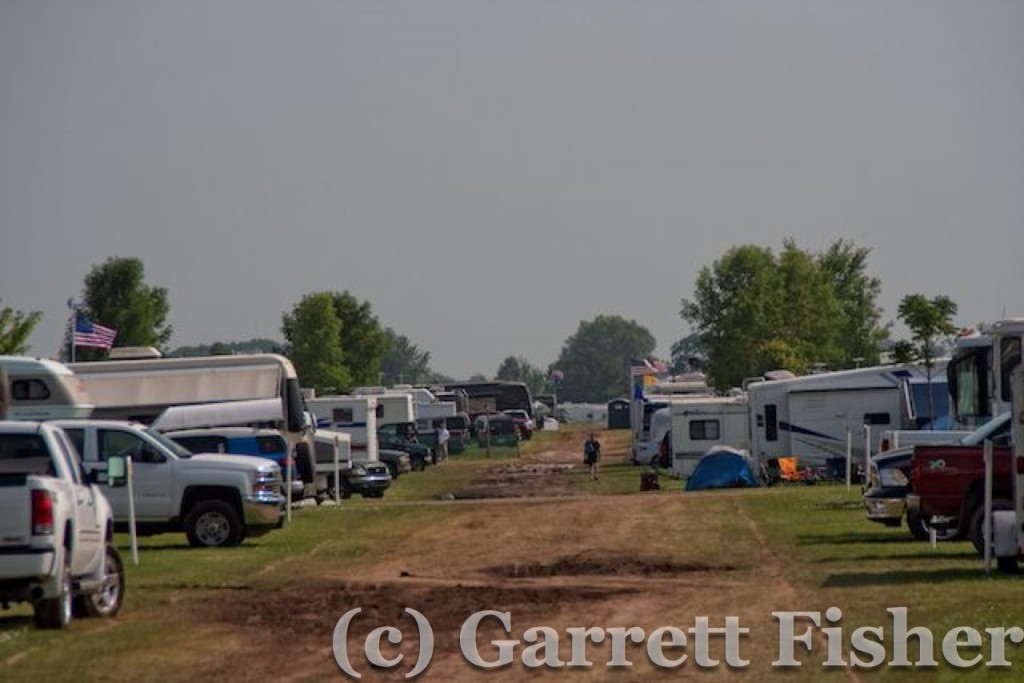 Camp Scholler – After Two Days of Drying – Much Worse When Wet

During registration, I found out I was committed to a 3-night stay. So be it. It was dark and raining, with mud everywhere. It reminded me of a Siberian gulag in a bad kind of way – and I felt like a new inmate having been condemned to a life of camp living. Driving in the dark through mud puddles, crowds of wet people, golf carts, generators, and the like, I instinctively was heading as far as I could get from humans. Sleep would be fleeting. I found a spot on the far south end of the campground, only to find out it was the dog walking area. Many of us poor saps invaded and took over. Fearing headlights in my face, I parked the truck to block them and set up the tent in the rain. With the loud roar of US highway 41 and advice from Wisconsonian fellow compatriots that some “P-51s will be sure to wake you up at 6AM,” I put tissues in my ears and pretty much said “the hell with it” and went to bed.

The middle of the night downpour confirmed that my tent didn’t leak (um, yay) and I awoke at 7AM, fresh and skanked and unwilling to shower in a shed with a ton of other men. I will sneak into the prison shower at the German’s rented dorm later. I had some client matters to handle that I had intended to deal with the night before, so off to Starbucks to get internet (cell signal was no good at that spot) and load up on supplies for my unintended habitation out of doors. That included an umbrella for the coming rains.

Upon finally arriving at the event, I was reminded why I liked it. In the mornings before the airshow, there is air traffic everywhere, I mean EVERYWHERE. Ultralights have their own field and have constant traffic. The Ford Tri-motor gives tours off the main runway, along with a host of other traffic. The auxiliary runway is nonstop tandem take offs and landings. Helicopters make nonstop tour rounds. The control tower displays a banner “World’s busiest control tower.” I believe it. It’s a swarm of aircraft, jet fumes, and avgas exhaust. [Breathing in]…..Heaven!

The airshow is a familiar show of the unbelievable –feats that most would assume would destroy an airframe, much less an engine or the physiology of the pilot. As if that is not enough, there are pyrotechnics as part of the show that yield 10 sticks of dynamite per explosion. Trust me, there are many explosions, culminating in the “Wall of Fire”, a delight to any pyromaniac, an explosion of flames and immense infrared heat. During the airshow, a thunderstorm came within 3 miles of the field, and it began raining. Weather remained above VFR minimums, so the show continued. I leaned over and mentioned to Jürgen “Most pilots would be sweating landing a C172 with that thunderstorm over there – and these pilots are doing loops. I think average pilots are either stupid or drama queens.” He had an enlightened look on his face – that there are those who can perform an airshow in a thunderstorm yet legally certificated pilots that cannot land near one. 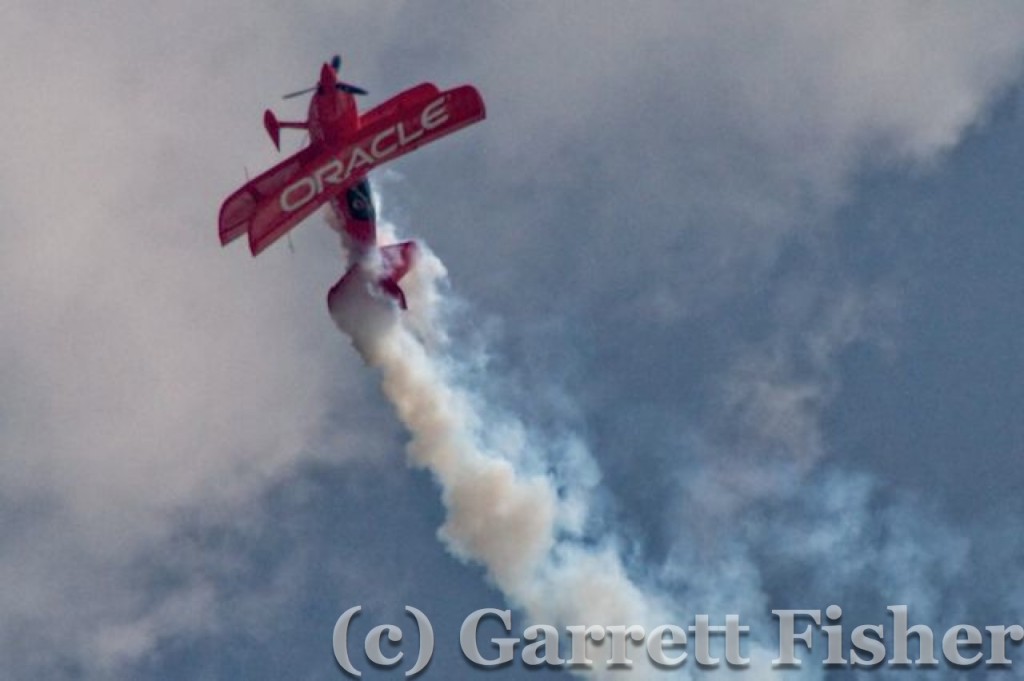 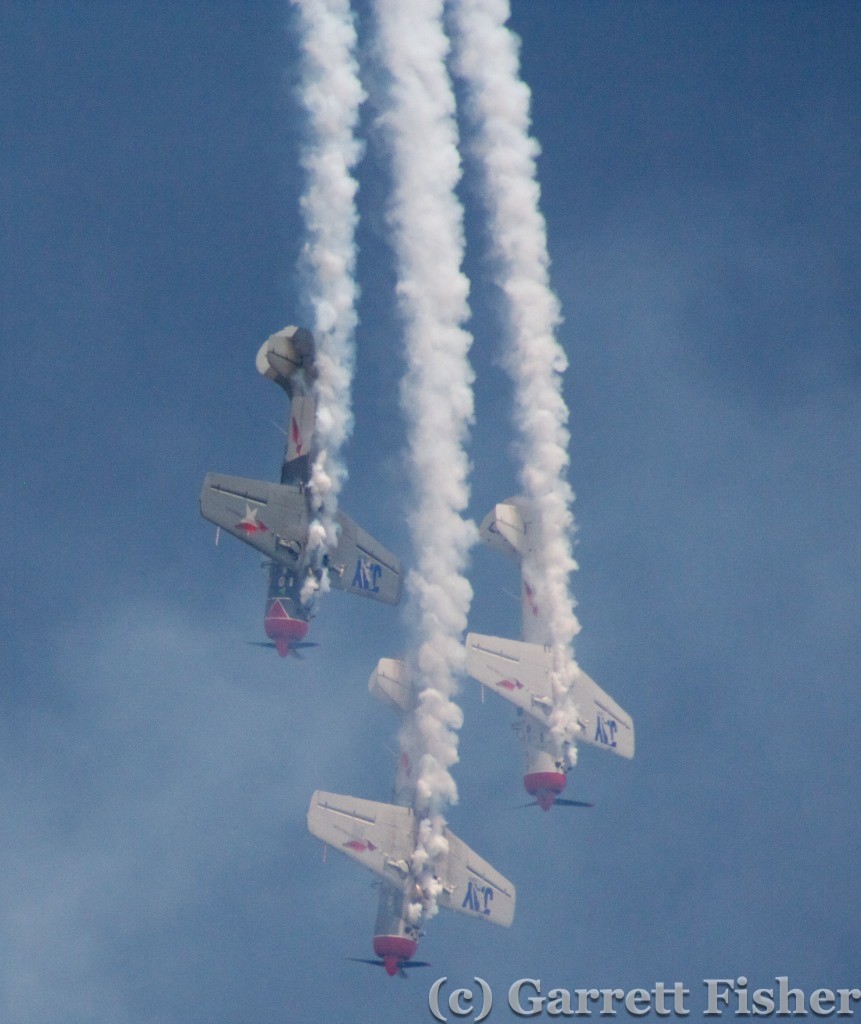 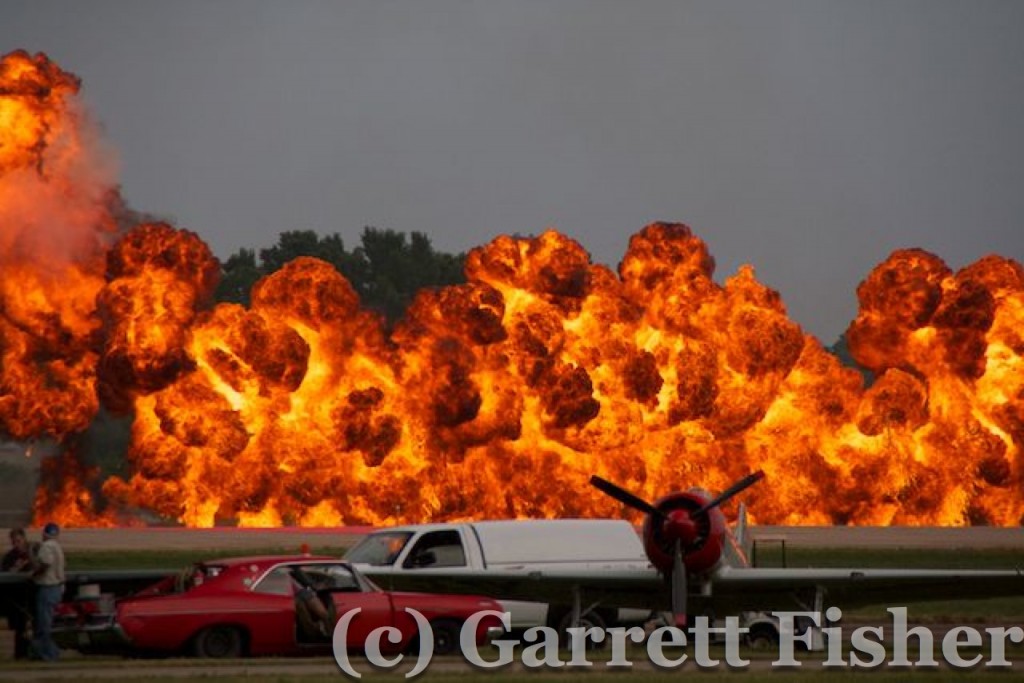 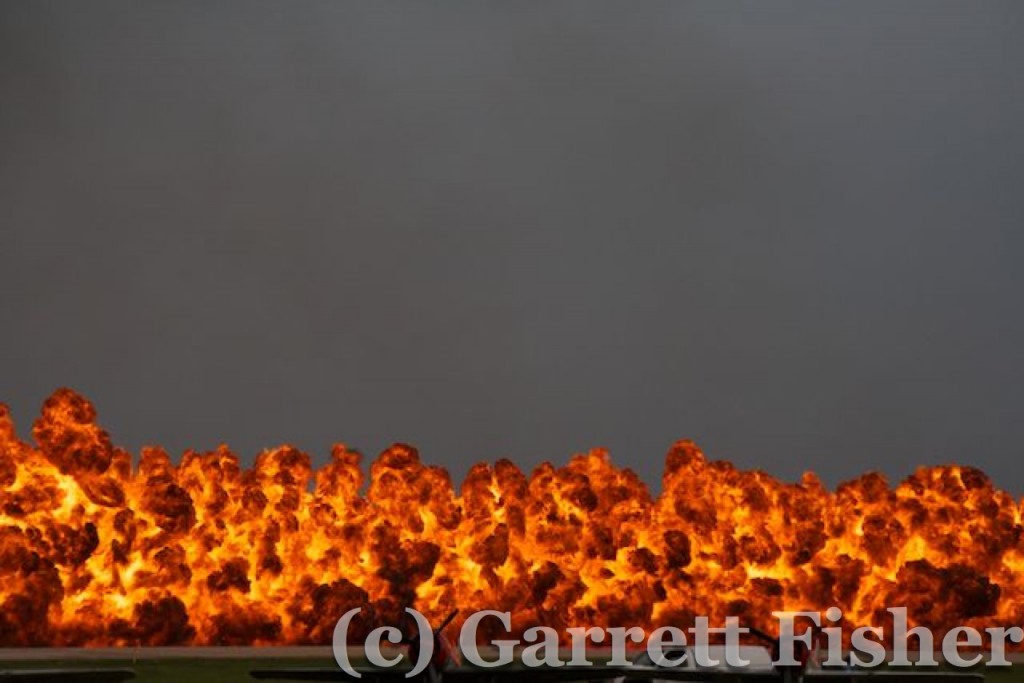 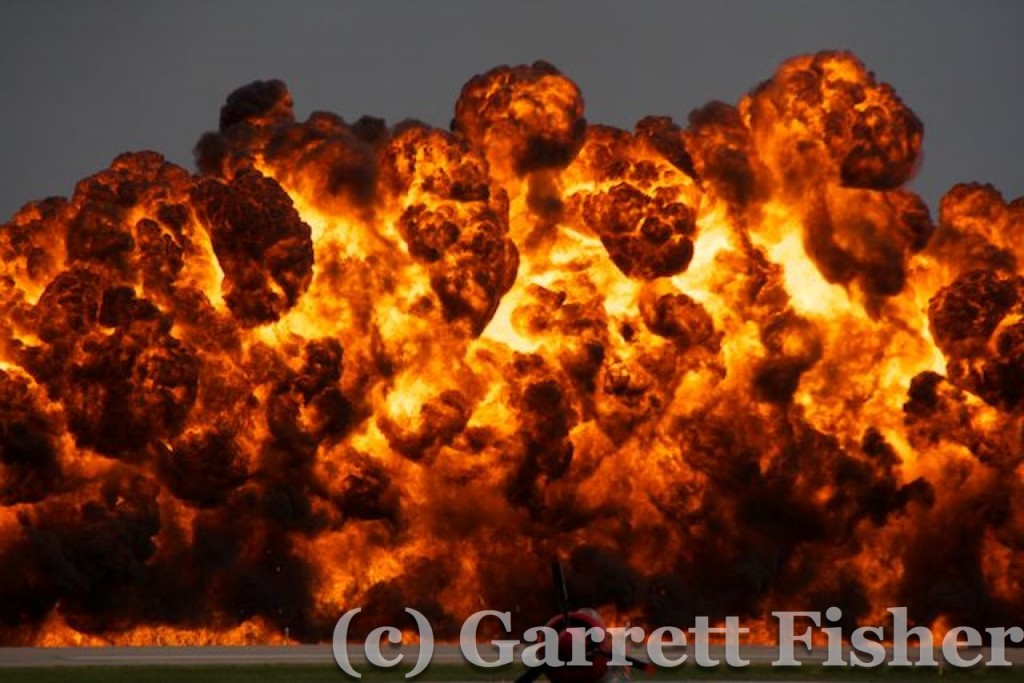 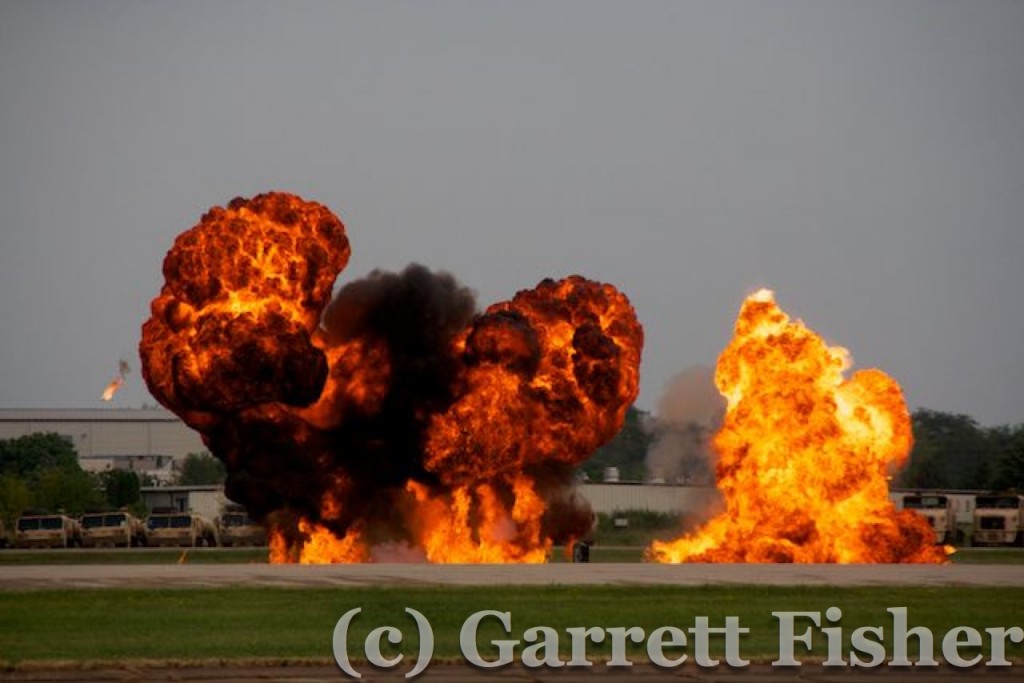 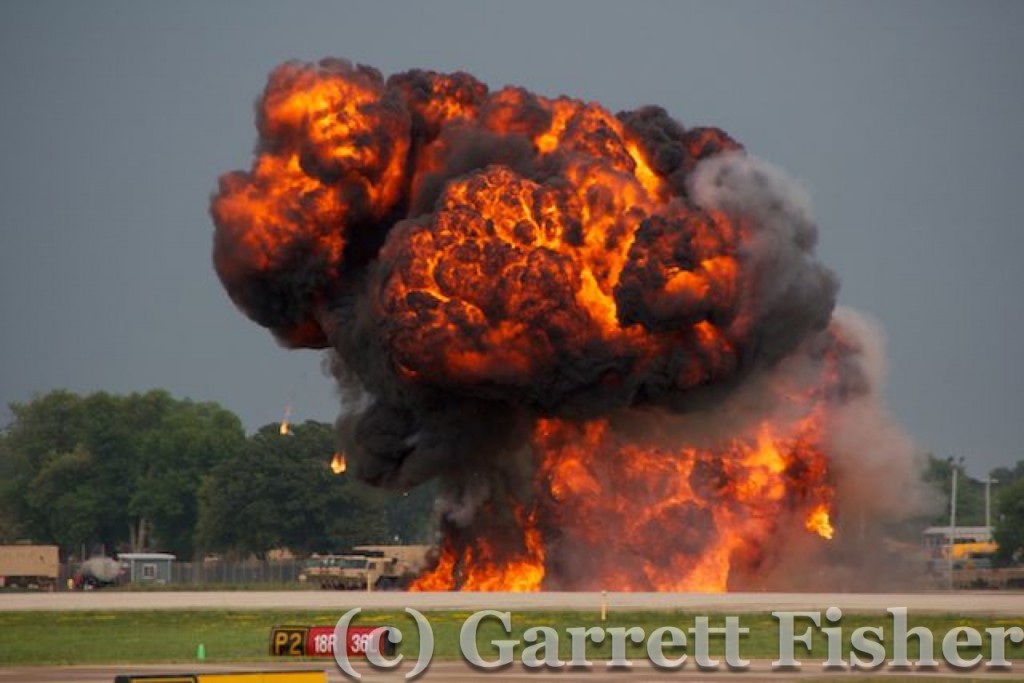 This year the US Air Force Thunderbirds performed at the conclusion of the Friday show. Six F-16s doing amazing stunts at amazing speeds with amazingly ear blistering sounds. The afterburner takeoffs and flybys put a smile on any sane pilot’s face. God bless America and the obscene jet fuel she burns as a show of might. Carbon emissions and fiscal solvency be damned, it was awesome. This event was my first real GoPro video recording, having recorded the event while taking over 100 shots from my DSLR film camera at the same time. I must have looked like a retard – shooting with two cameras, one hand each. It’s a skill after almost 20 years of photography. 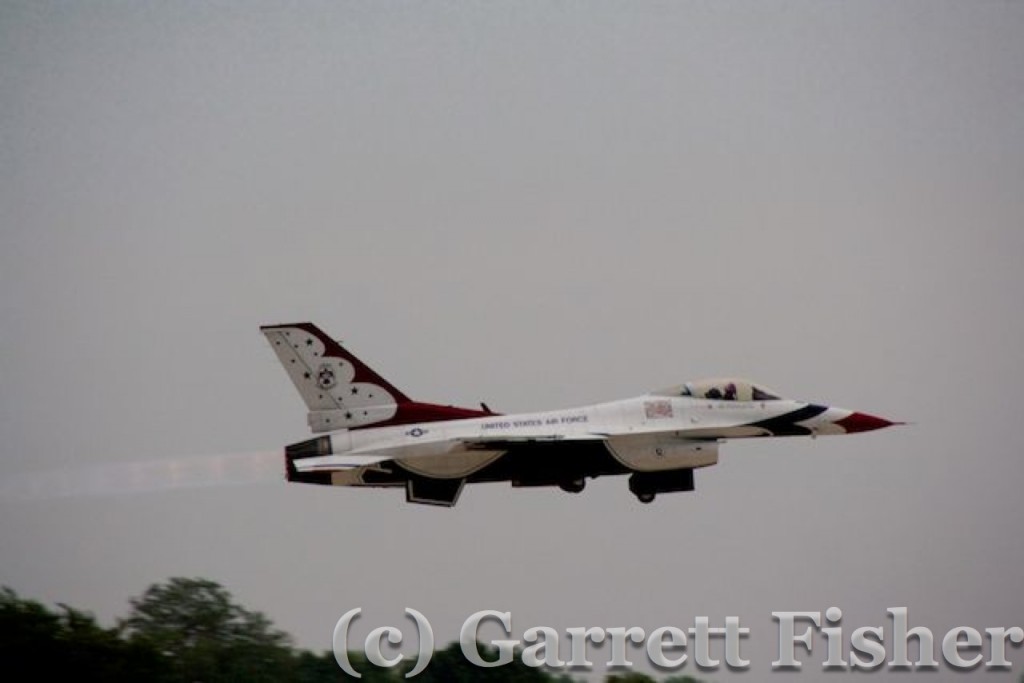 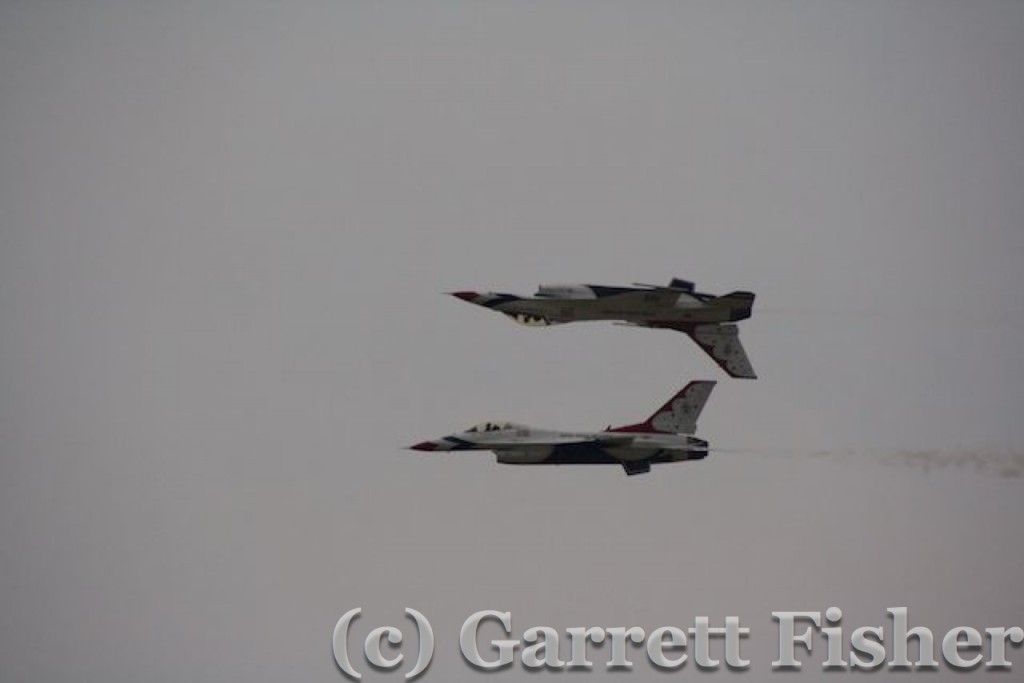 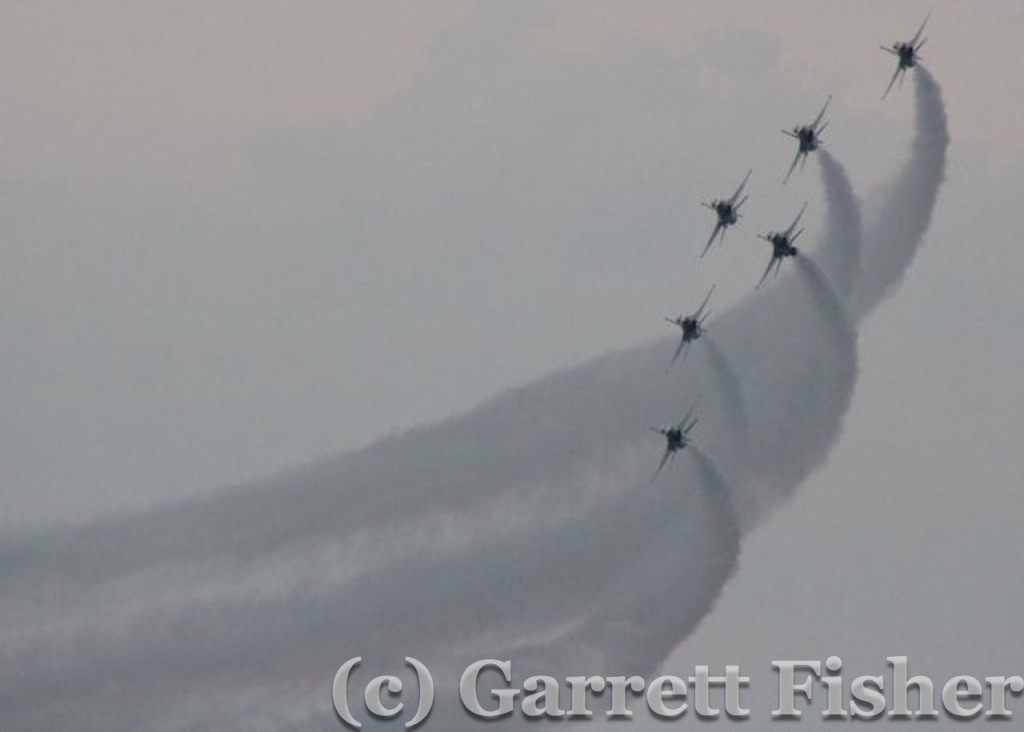 I elected to walk back to the truck in lieu of a shuttle. When 30,000 other people want to ride the same bus, a 1.5-mile walk seems better. I came across the ultralight field with a STOL (short-field takeoff and landing) taking place: Carbon Cubs, Super Cubs, modified Cubs, and ultralights competing for shortest takeoff and landing distance. My impromptu wandering put me right under the takeoff path.

After a prison shower at the dorm and dinner with the Germans, it was another night of attempted sleep. The next day featured stupidly intense heat. We decided to go to the Seaplane Base, which required a drive/ride to get to. I had quite an argument with my European friends, as they wanted to ride with 40 other sweaty people at the collective cost of $9. I preferred the freedom and refreshment of my air-conditioned truck. My American selfishness won out, and when we arrived at the Seaplane Base, we were charged $10 for parking. The Europeans were spitefully thrilled. As my wife said, “if you were alone, you would have driven anyway.” I later decided that I had enough of the heat, and I aborted early to go to Starbucks until the heat broke. While I missed the second Thunderbirds show, I did have the joy of watching the F-16s absolutely tear up the airspace around Oshkosh, flying louder than at the show because of the orientation of the engine output to the areas outside of the airport. It was stunning. 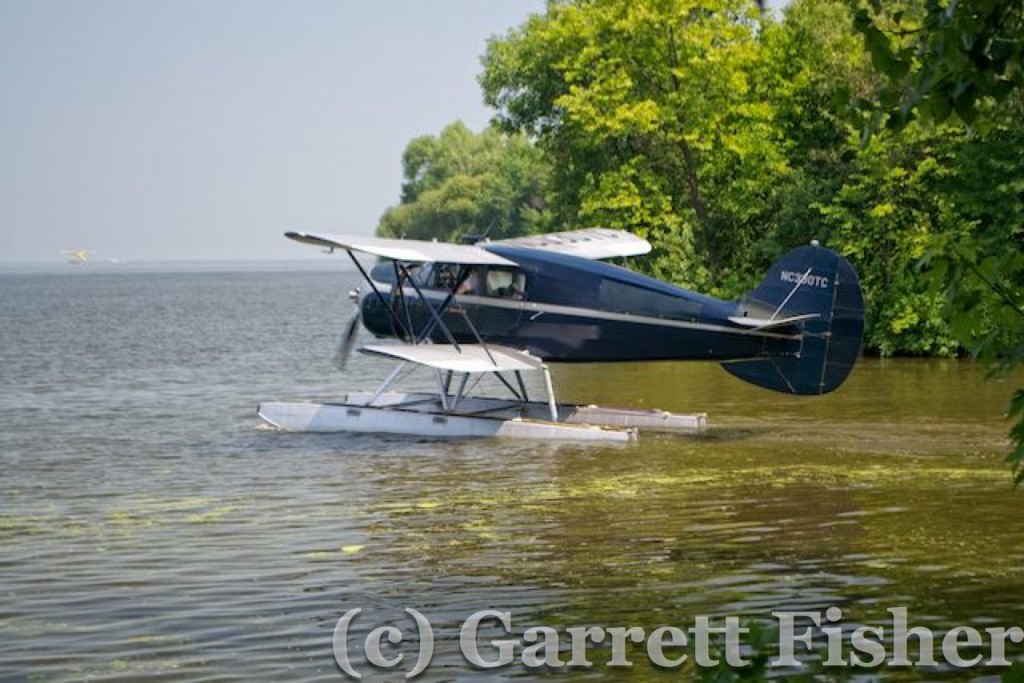 We regrouped for the night air show (the biggest in the world), which started at 8PM with some late evening light. The show commenced with some insanely over-the-top pyrotechnics, an almost obscene recreation of living in a war zone, with shock waves rattling the snot out of the facilities and my skull. It was beyond awesome. After the bombings, it was airshow flying at night, with lighted aircraft and a few airplanes and a helicopter with small fireworks coming off of them in flight doing aerobatics. It all culminated in the most amazing fireworks show I have ever seen. Photographing the airplanes was a challenge, all manual settings, trying to predict their speed and maneuvers so as to select an exposure that would capture the beauty of the maneuvers. 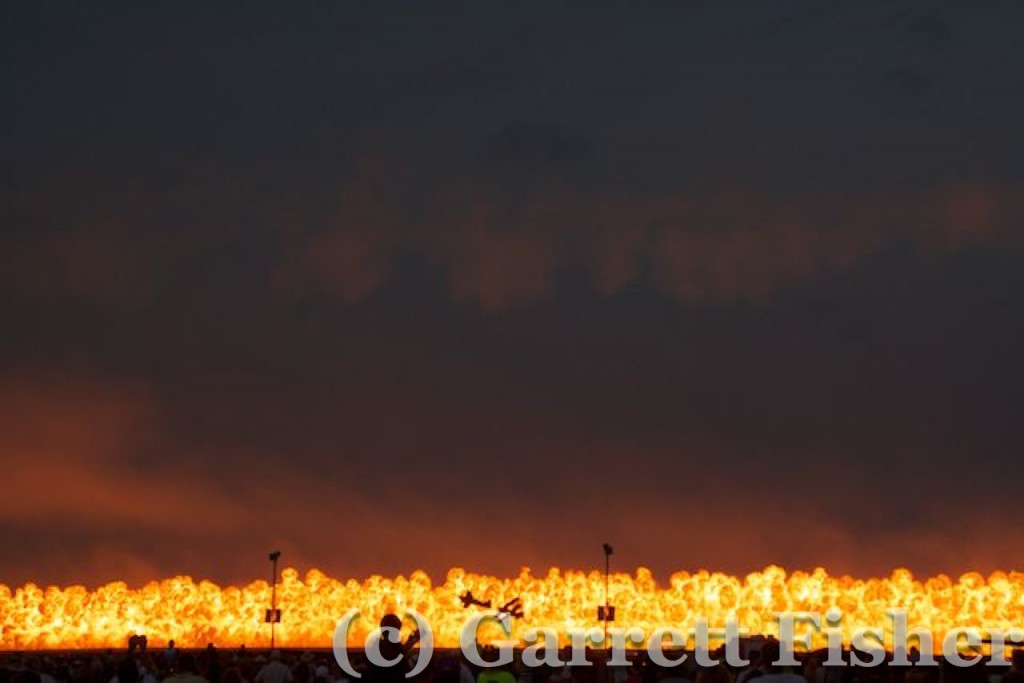 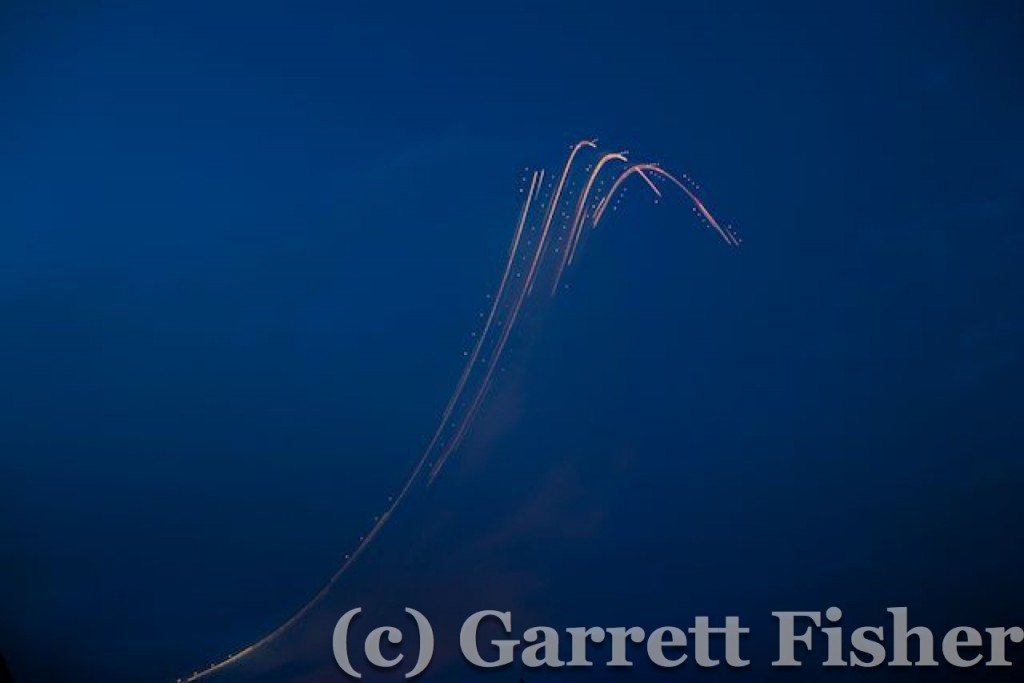 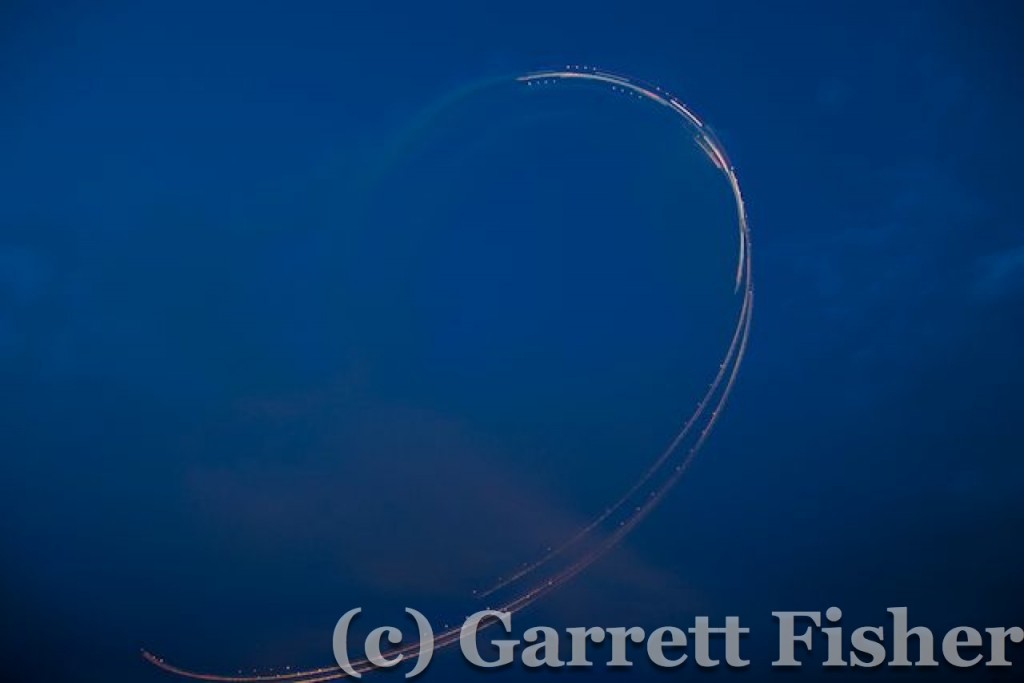 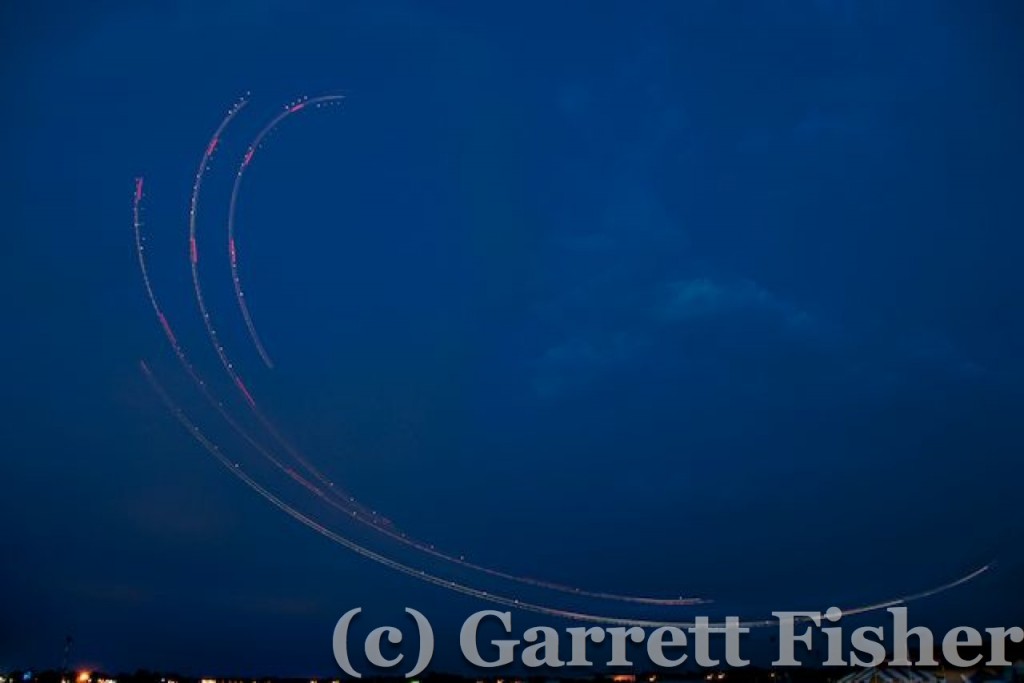 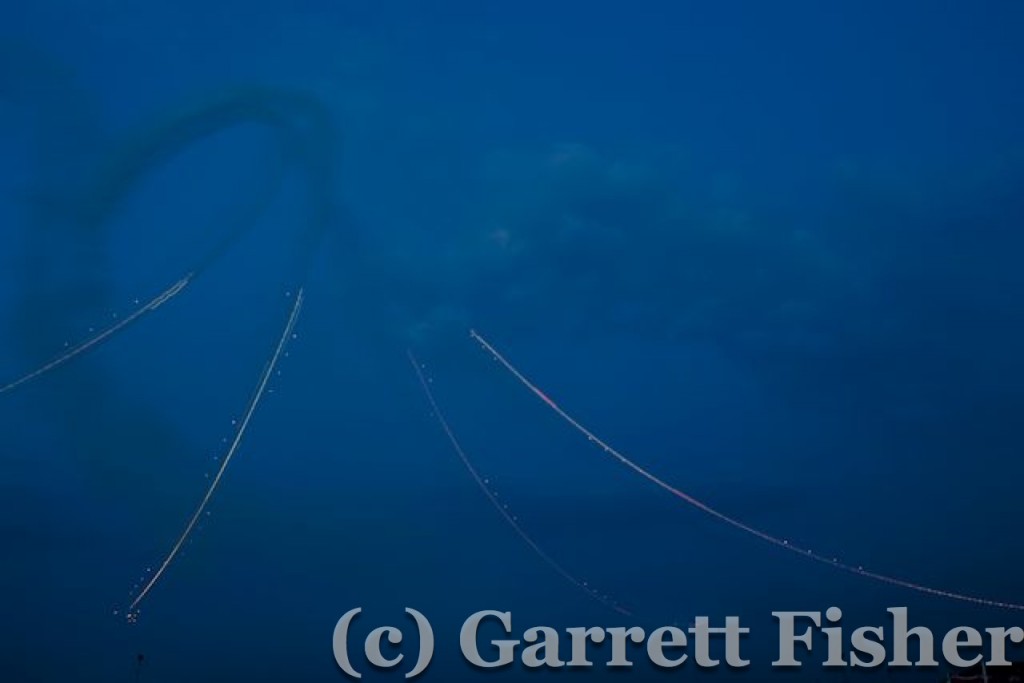 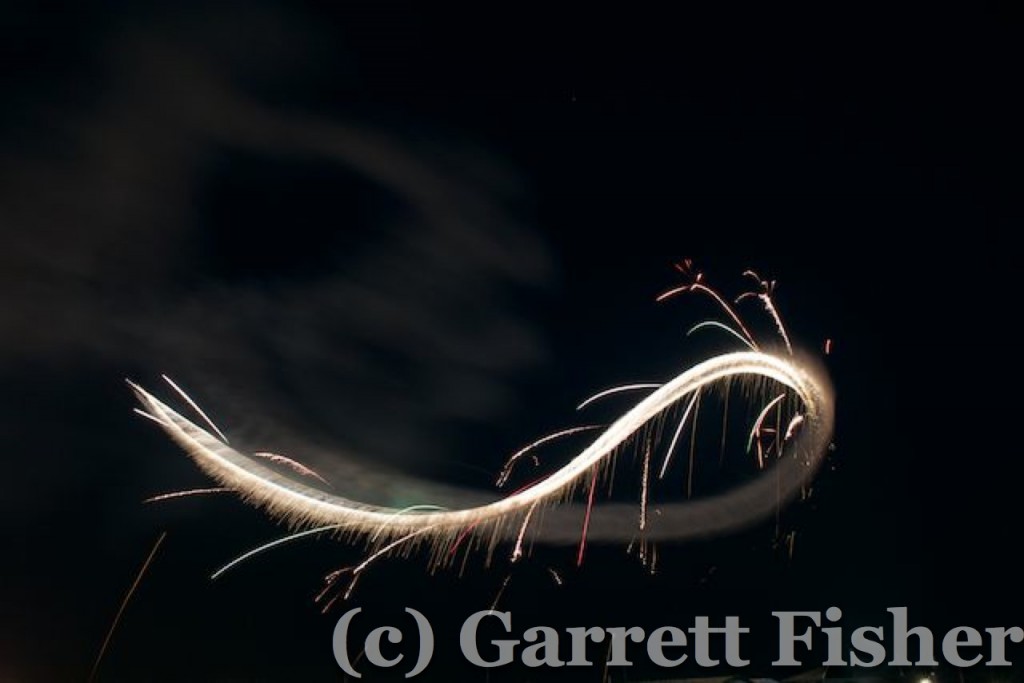 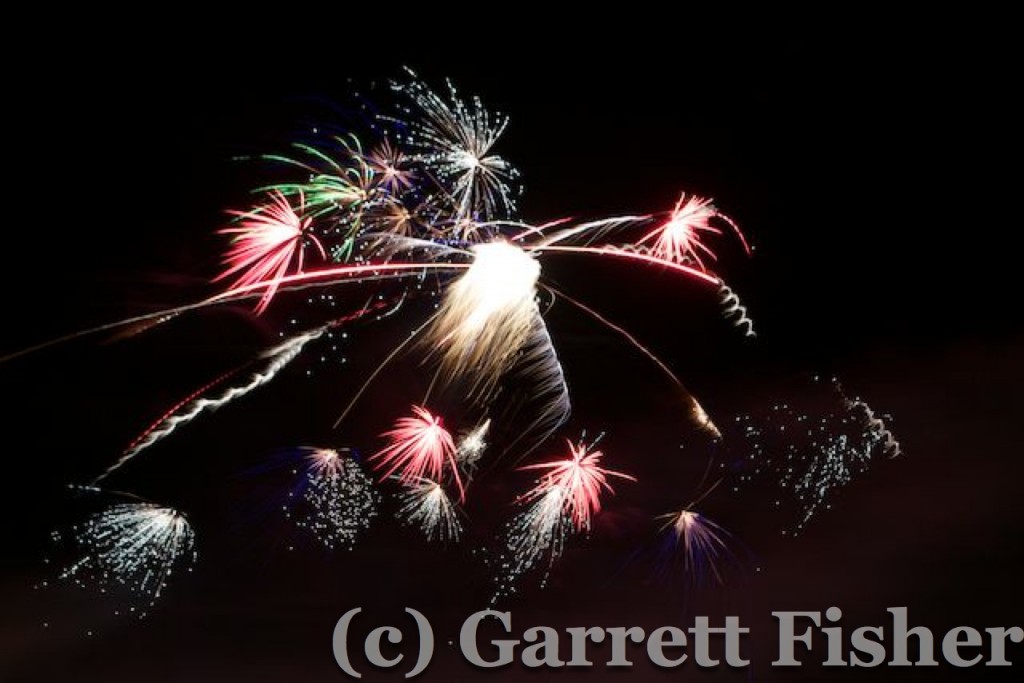 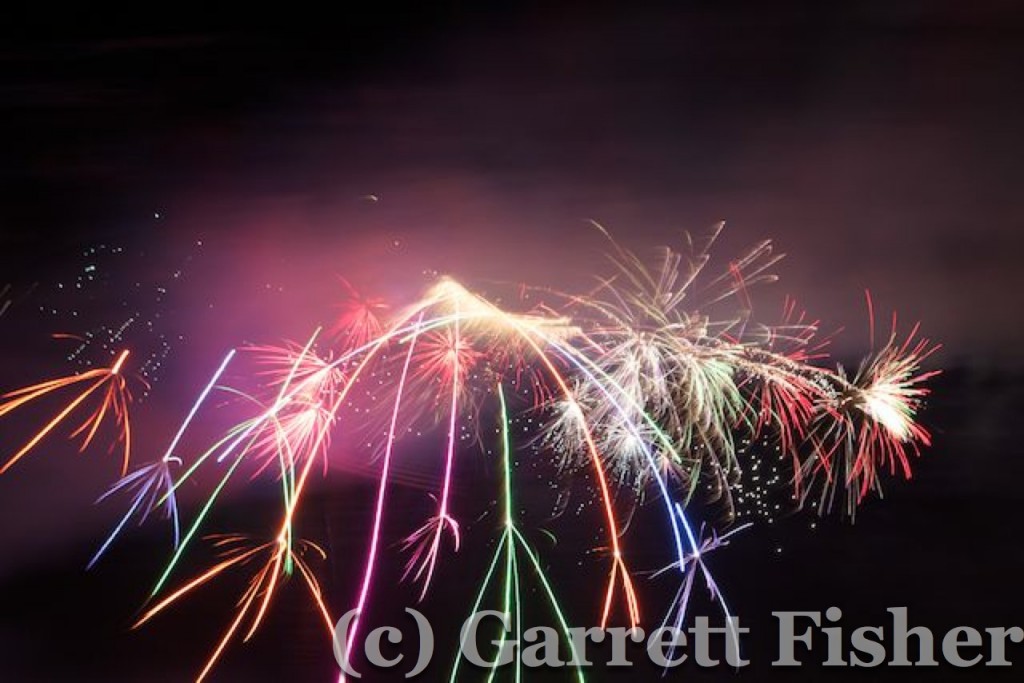 Night Airshow – Helicopter with Fireworks Launched from It 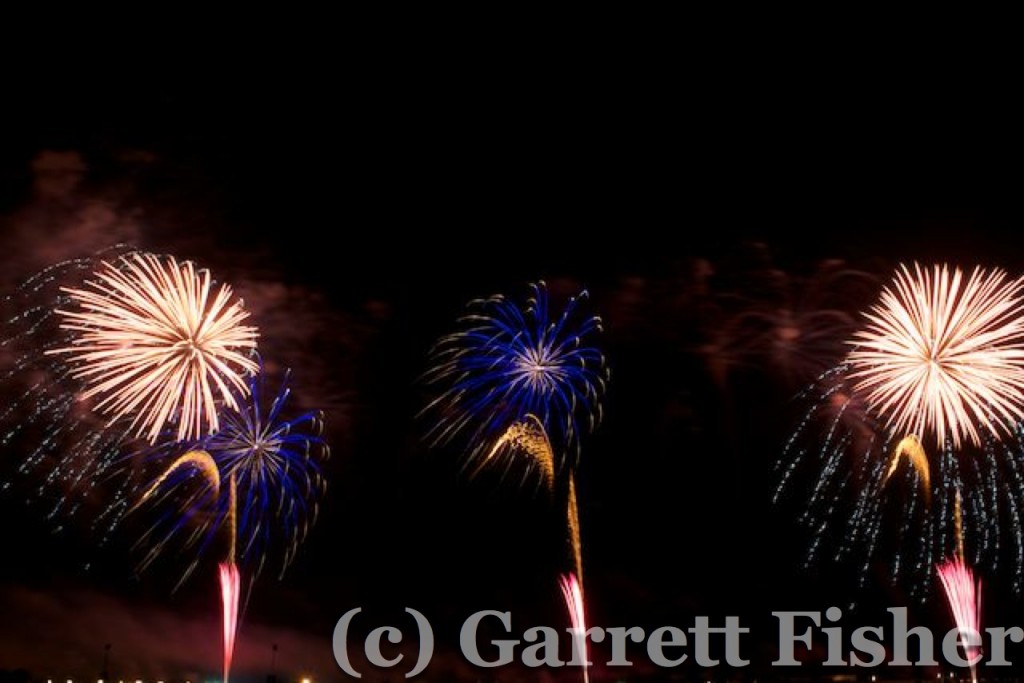 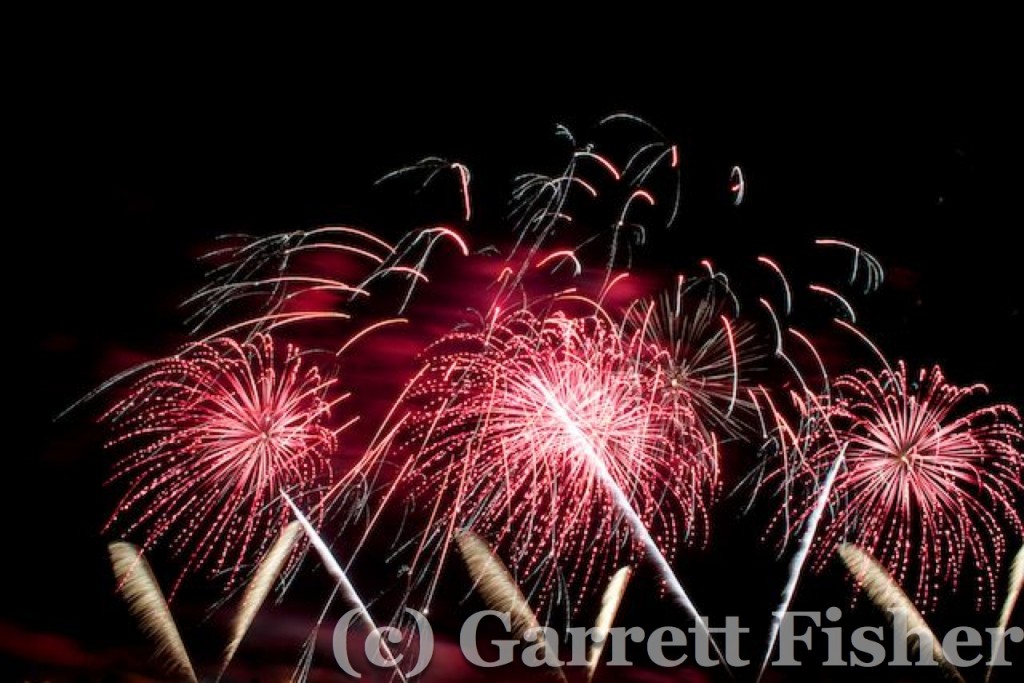 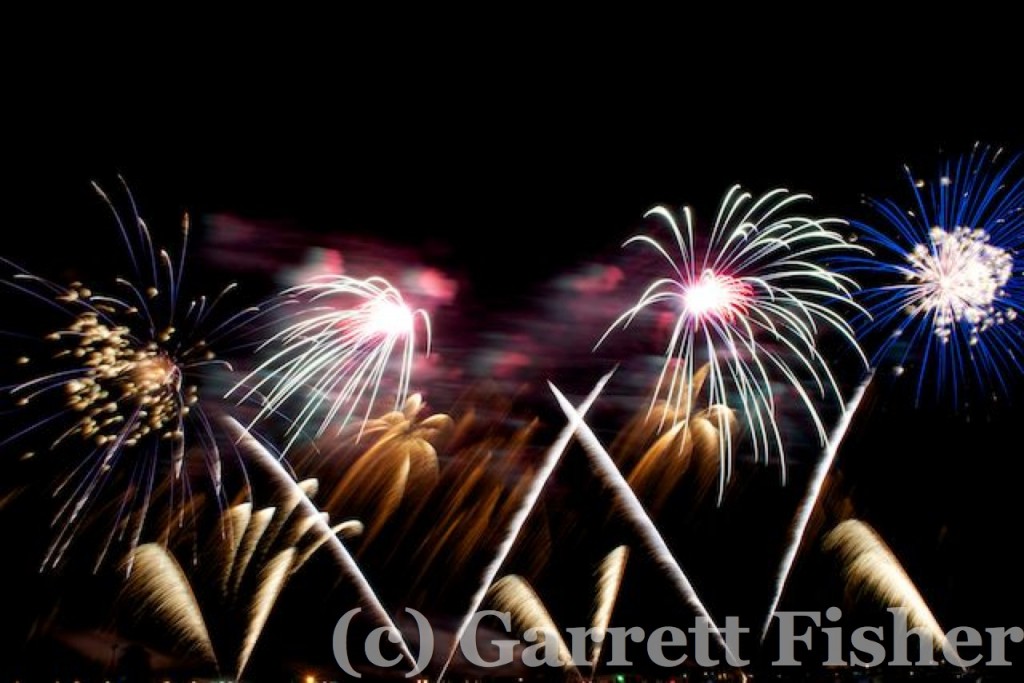 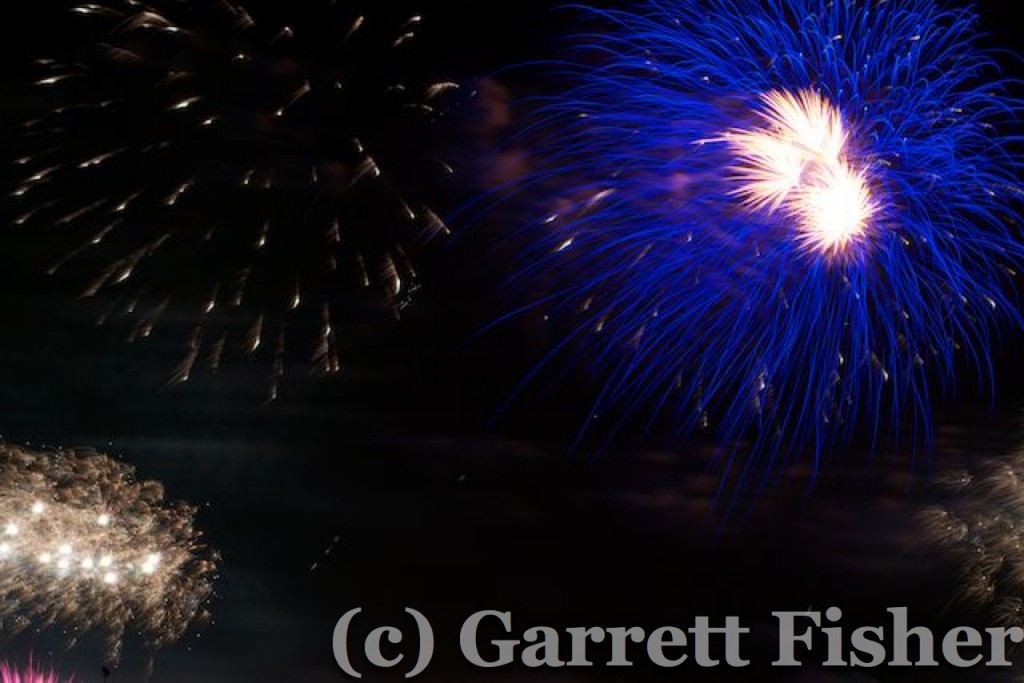 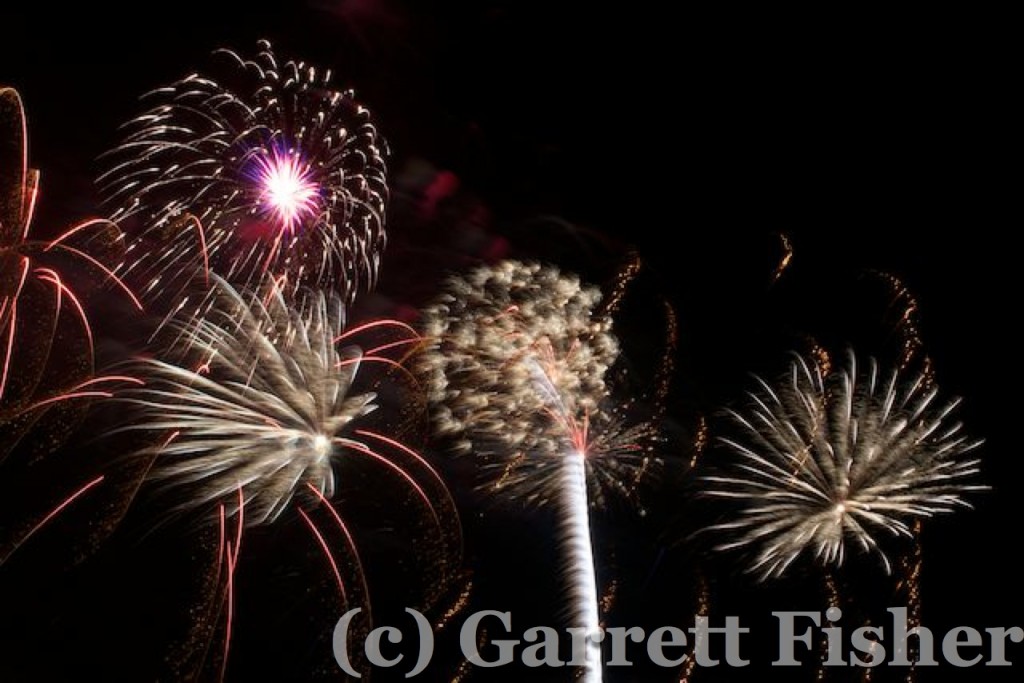 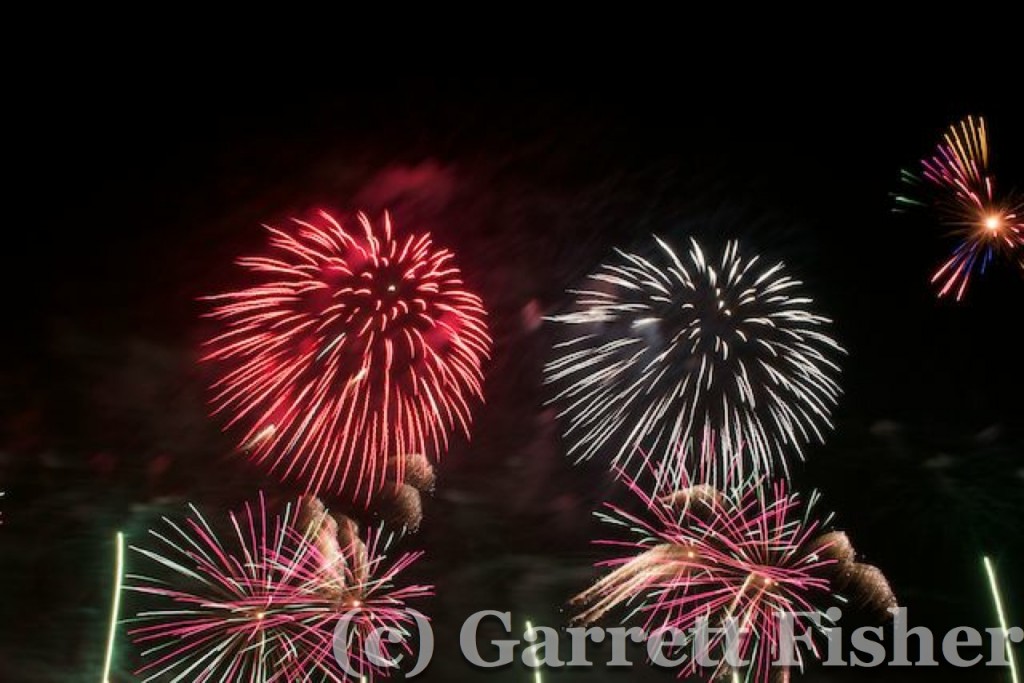 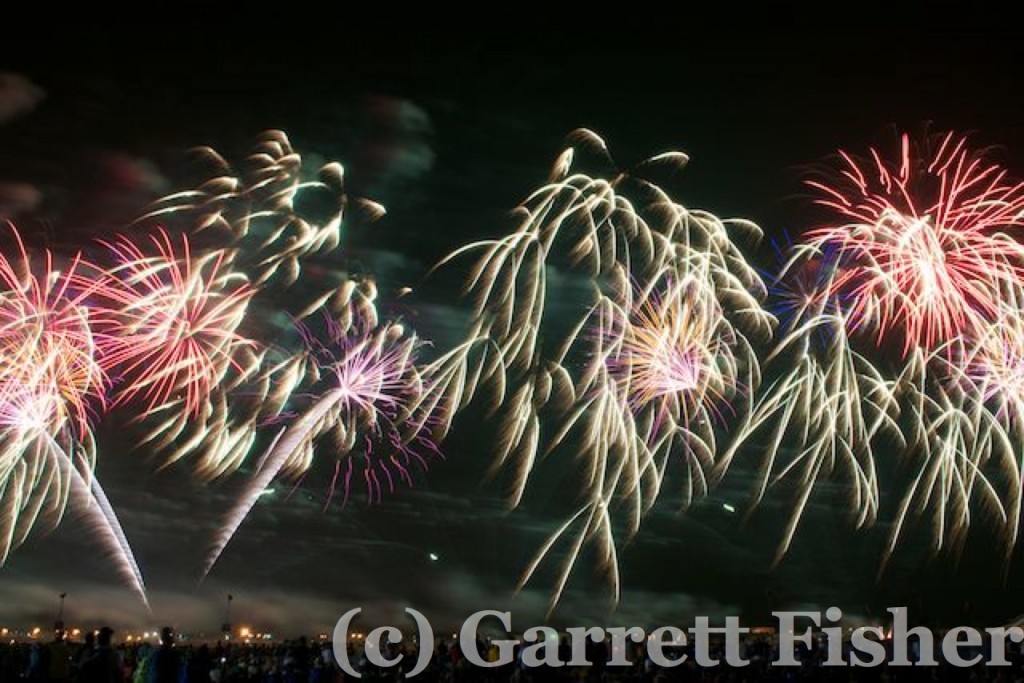 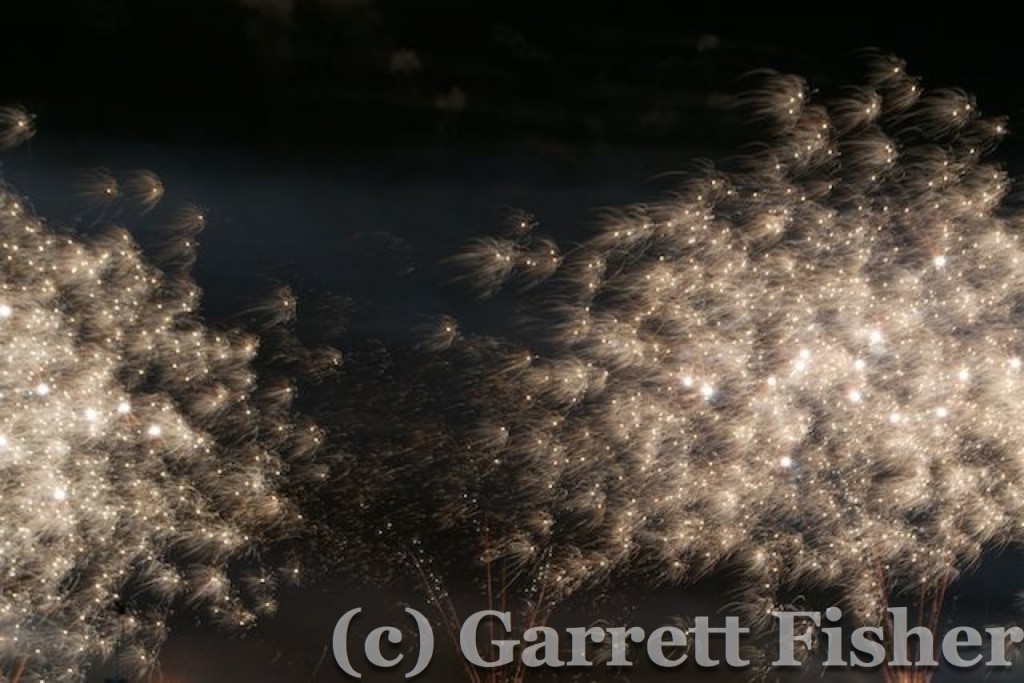 I parted ways with Juergen and Simon, slept 6 hours in the tent, and was off for another 15 hours of driving starting at 5:30AM. They had a slightly longer day, driving to Chicago and flying overnight to Germany. We emailed after getting home that this year was better than last, and we look forward to the possibility of getting a show spot for the airplane and my books next year. Stay tuned.