I do a pretty crappy job of explaining what I am after when I go flying. It must look like I have some form of addiction not all that different than a crack addict, flying around aimlessly in the most dangerous terrain possible, just to satisfy some queer fix to be hypoxic and nearly freeze to death on an ongoing basis. Maybe some of all of that is true. Nonetheless, I am working on a book on the Green River, which starts in glaciers in the Wind River Range and ends in the Colorado River in Canyonlands National Park, Utah. This is one of somewhere between 6 to 9 books I am working on at present. I set lofty goals, and weather and other concerns get in the way of some of them, and I net down to a finished number (Washington state smoke is messing with one of them….).

This flight was to get the east side of the Wyoming Range and then head up the Green River itself through the middle of one of the desert basins in Wyoming. The rest of the Green River will wait for other flights.

Mr. Toad resurfaced. Yet again, I am flying east of the terrain, with westerly prevailing winds, and the rough, messy air accelerates as it opens up to an east-facing desert area, and I get the crap beaten out of me. The pictures really weren’t that good of that part, anyway.

As I rounded La Barge, WY and headed north, I first thought I was wasting my time. A river running through desert? Yay. Thrilling. Like I haven’t seen that before…. I opted to fuel at Big Piney, WY, just in case, and then went north. The Green River got quite pretty at that point, and my mood improved. As I wandered over the Wyoming Range coming home, it became evident that the wind was more than a light summer breeze.

Arriving at Alpine, it was a 20kt, 90 degree crosswind. For you nonpilots out there, that is very, very bad. The airplane simply cannot land if the wind is blowing that hard from the side, as it will tip over, cartwheel, ground loop, or smash into something inanimate (think a car going around a curve and rolling over). I tried to land on the short parallel grass strip. The airplane was cocked 45 degrees into the wind to maintain a straight path. Yeah, that is not happening. Full power and go around. I tried the grass strip a second time, this time taking more time to line up the landing and get better control of it. Nope. Not happening. Full power and go around again. I decided to make one attempt at the paved strip, taking advantage of a little wind shadow in one section where the trees and some hangars block the wind. Hugging the upwind side of the runway, it was a “bit” of a wild ride on short final. Hovering two feet above the pavement, the wind virtually stopped right as predicted, and she dropped down onto the pavement, got picked up once, and then I was able to brake hard enough to stop the damn thing from flying. If that didn’t go well, I was heading down the Star Valley to a private field that was pointing into the wind. Two days in a row, I go flying with a glorious forecast and come home to a hurricane three hours later. At least this time I had 10 gallons of fuel….
South of Hoback Peak, Wyoming Range 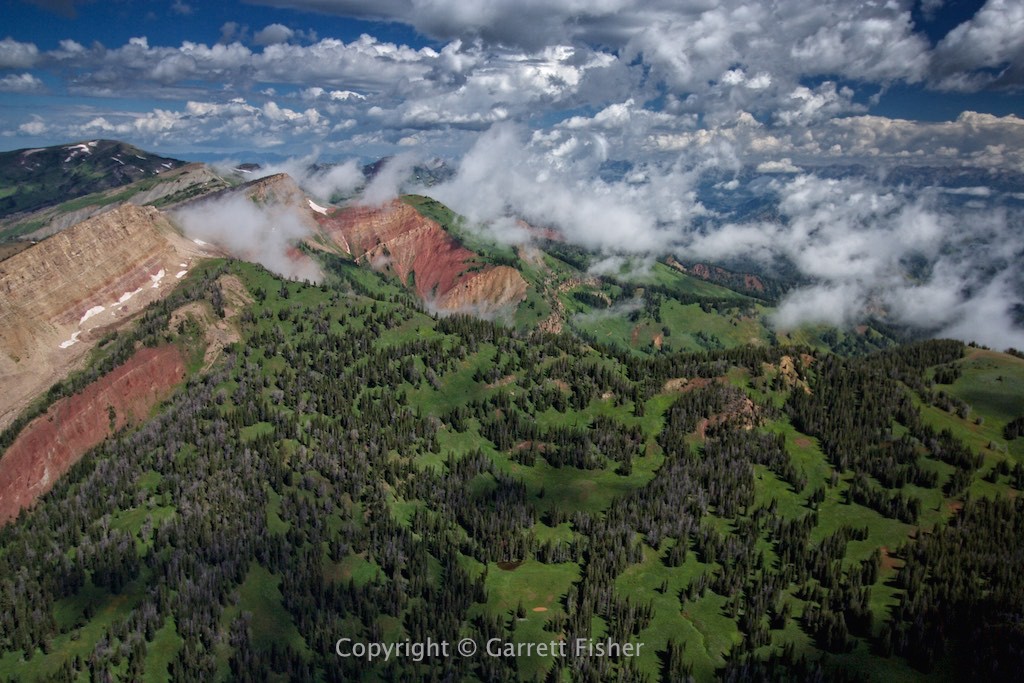 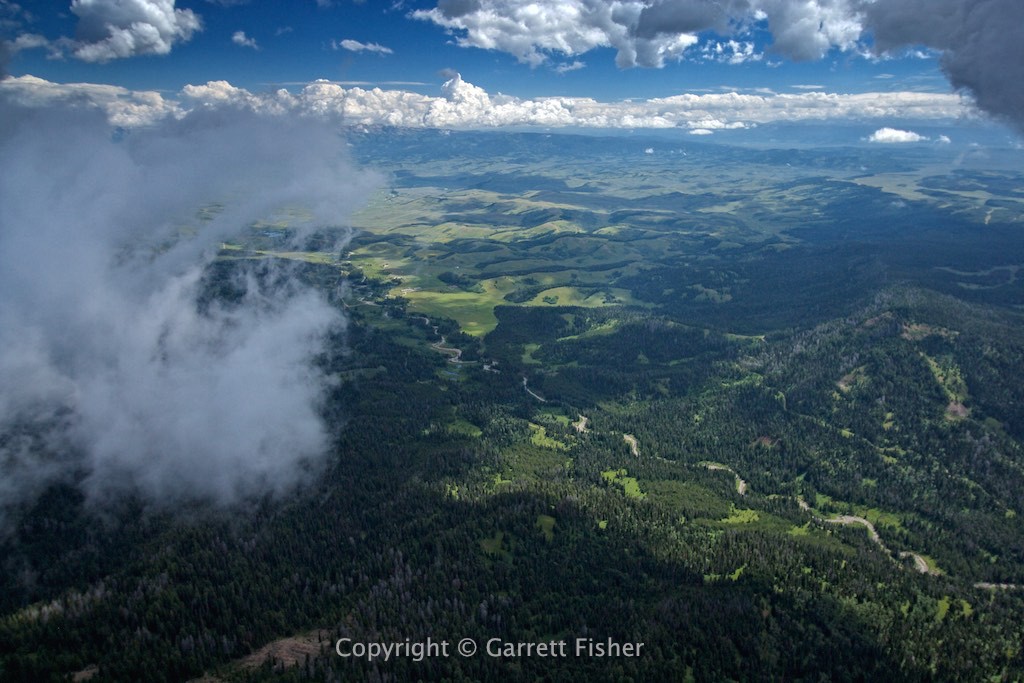 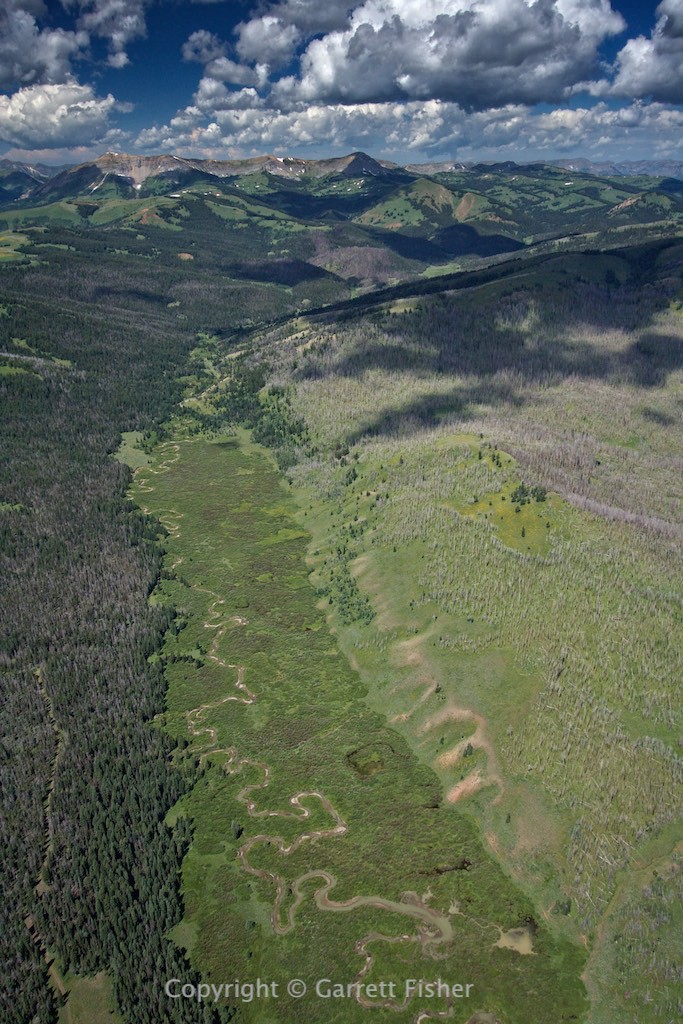 Bottom of the Wyoming Range, looking back at where I came from. Note dead beetle kill trees and patches of living green trees. Those were young when the beetles came, and therefore immune to the attack. 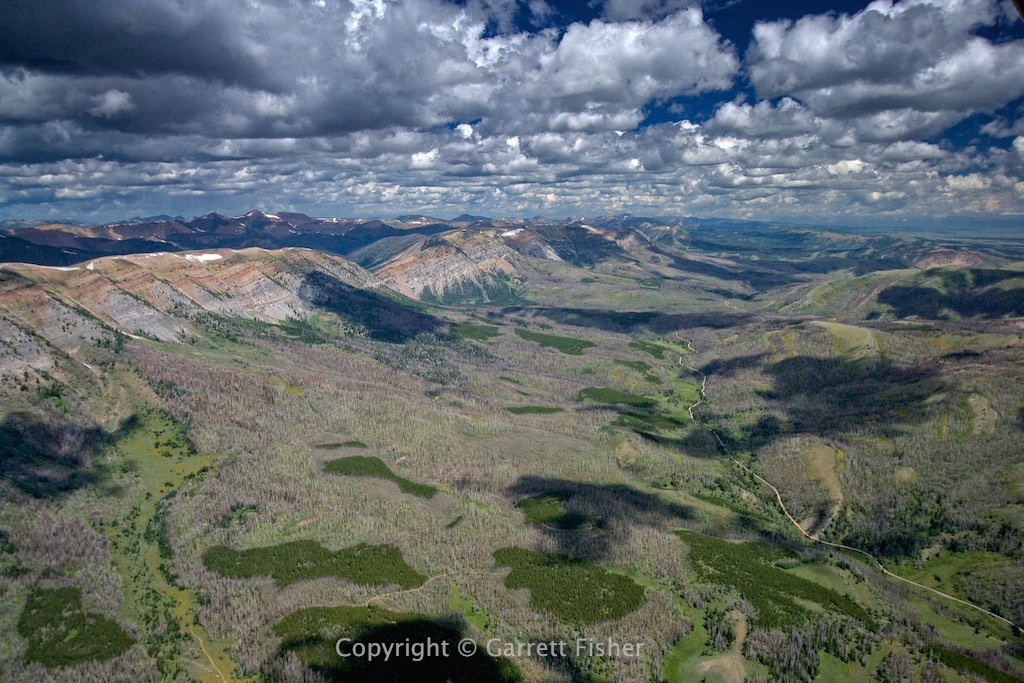 La Barge Creek, looking toward Green River (I flew down this creek) 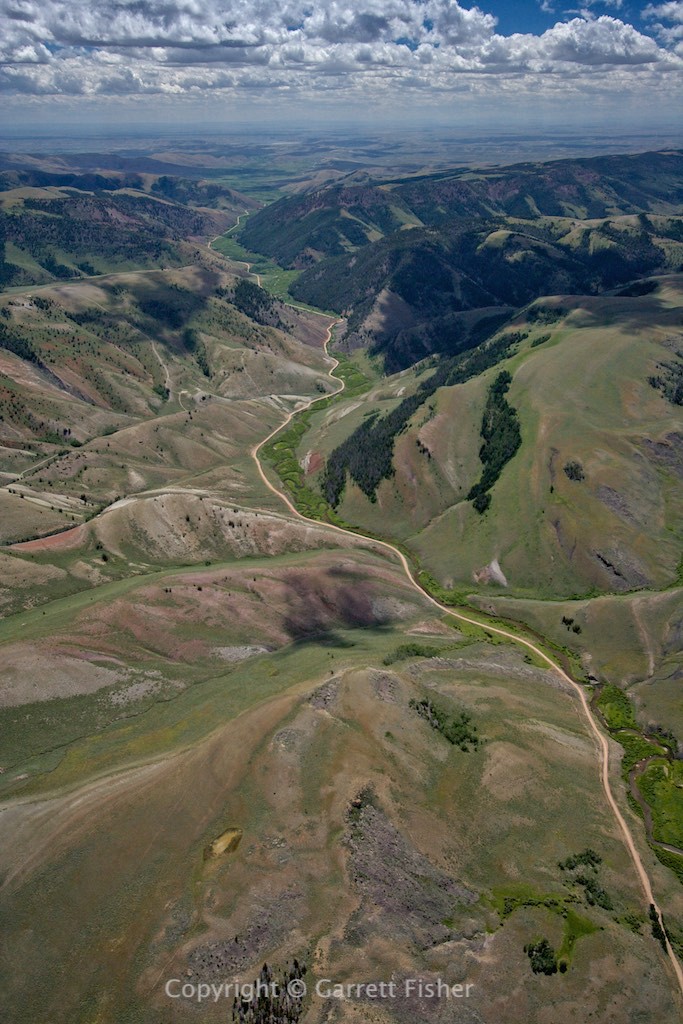 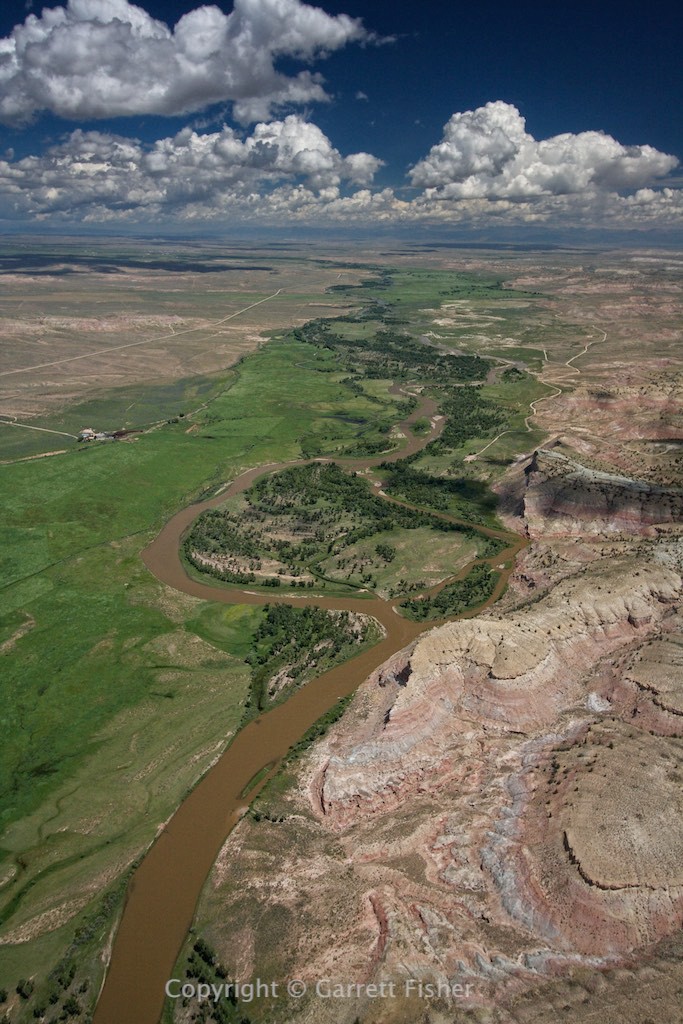 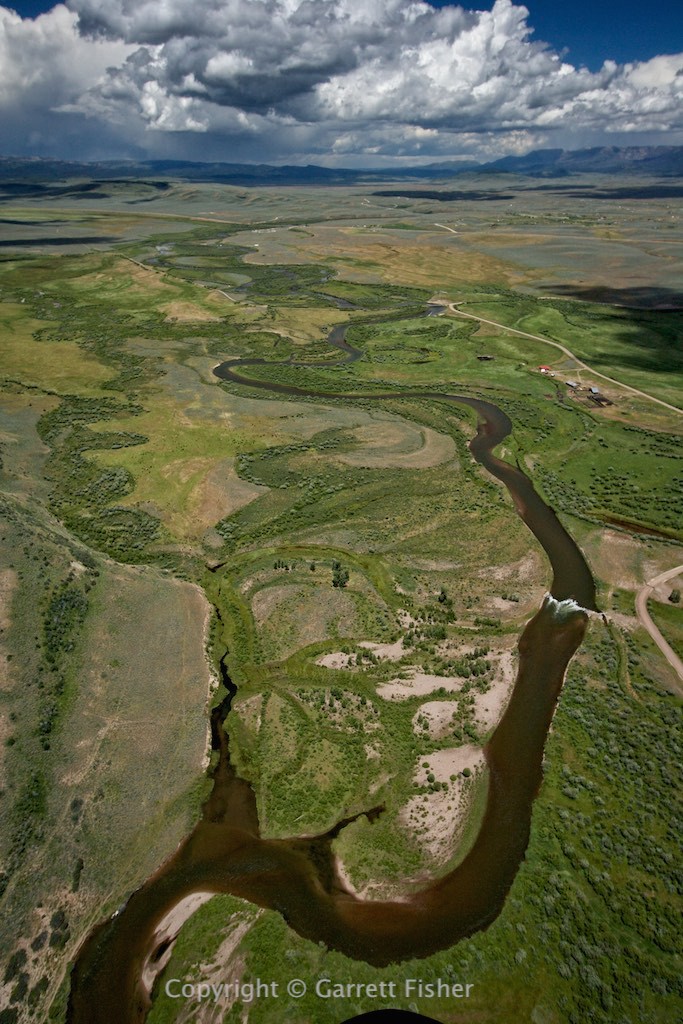 Looking toward Gros Ventre Range. I really like the texture of the ground in this area.

Looking over the divide. Everything on this side of the hill flows to Baja California. On the other side, it flows to the Pacific Northwest. Yellow tinge on the ground are alpine sunflowers. Terrain is approximately 8,500′ here. 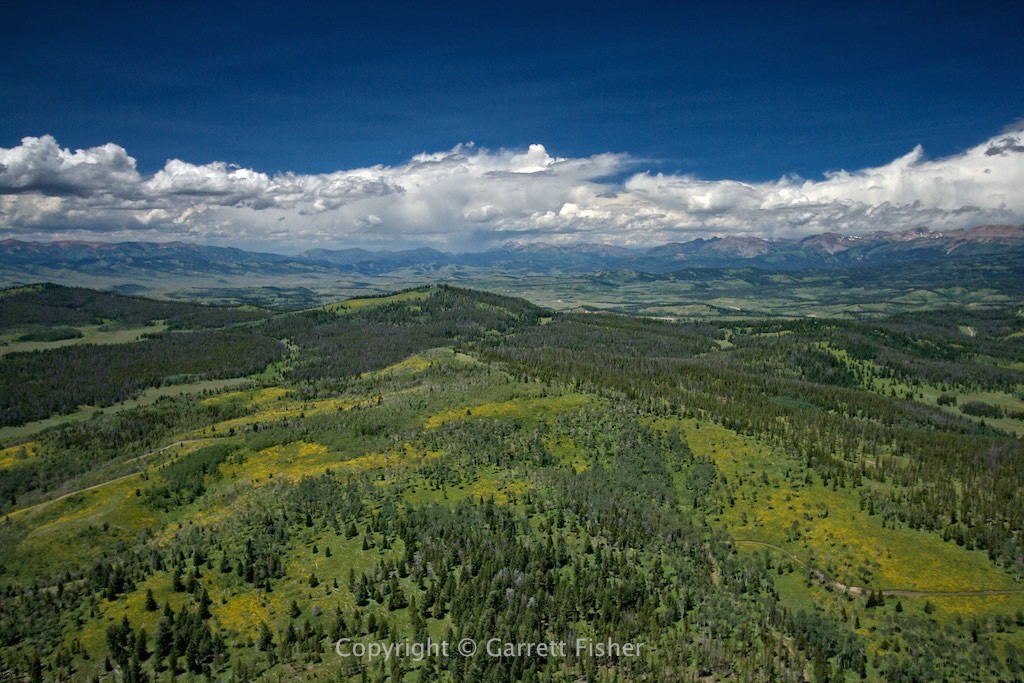 Nice view of the northern end of the Wyoming Range. Altitude 11,300′ where photo was taken. 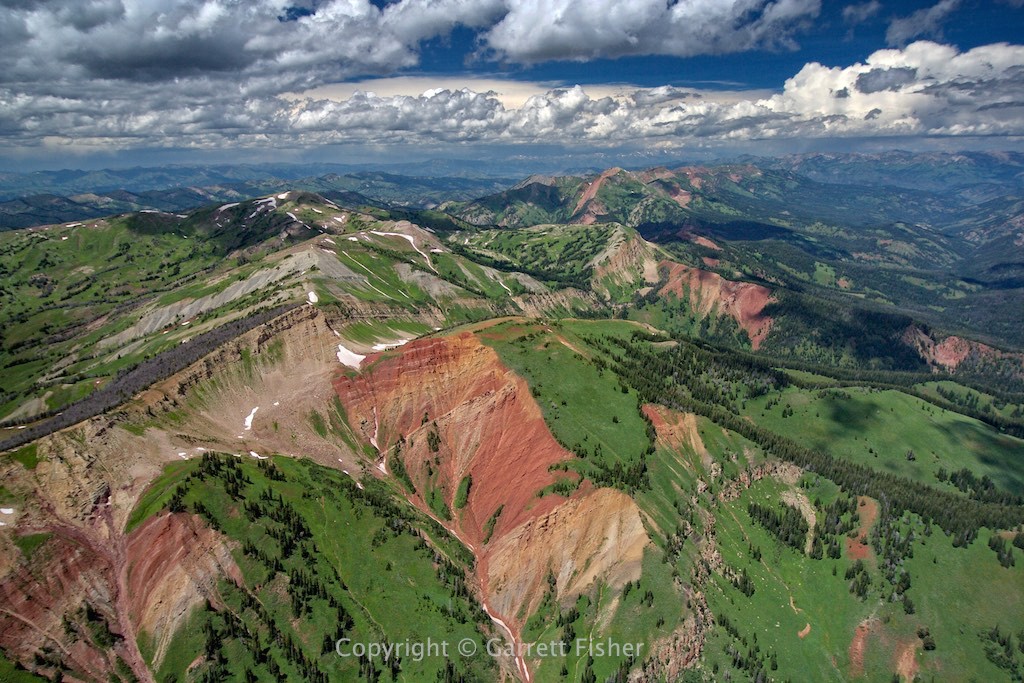