An oft-heard phrase I hear is “You’re lucky to be able to do what you do.” At first glance, I tend to agree, on a social if not American class/culture level, and after careful and contemplative consideration, I continue to drift from agreeing with that disposition.

One has to ask: what is luck? According to a dictionary definition, it is “success of failure brought about by chance as opposed to one’s actions.” I would amend the definition to restrict it to positive chance events, as people do not tend to refer to a “lucky” person as one who has the shit hit the fan on a regular basis. So, in effect, I am being told that what I am doing is a result of a semi-divine gift, and that what choices I make has nothing to do with it.

To me, all things are probabilistic distributions of outcomes. Every decision has a bell curve of potential realities with multiple standard deviations to either side of the center. Most see a binary reality, when life is really a continuing progression of probability based on controllable and uncontrollable inputs to the decision matrix. Throw in the occasional asteroid impact, lottery ticket, commercial airline crash, and so forth, and people begin to believe that either a supernatural being with personality or conspiratorial global forces under specific control are puppet-mastering their daily life. This has to do with the inverse magnitude of probability and impact overlaid on the same bell curve, and here we go, I have stooped in the muck of “The Human Theory of Everything,” my first book, clearly a product entirely of chance, as it wrote itself without my involvement.

Now that anyone who actually read this drivel is totally lost (and has probably scrolled down to the pretty pictures by now), my point is this: if you want something, get off your ass and go get it – don’t complain to me about it. Life is a continuing progression of small decisions, with powerful cumulative effects seemingly so distant from prior activities that it is hard for people to see the correlation between the cause and effect of the lives they have chosen. I have many experiences and skills that others do not, and others have many life aspects that I do not. Time and time again, wealthy, independent, and capable people have looked at my lifestyle with jealousy, telling me that they “can’t” do what I do. Oh, they can. The reality is, there is fear, or they won’t prioritize it. Why am I getting sucked into this emotional horse crap?

My grandfather taught me when I was very young that “you can do anything as long as you set your mind to it.” Well, here we are, and I continue to live by those words to this day. Luck has very little to do with it, with exception of events completely and unequivocally beyond my control, for which I am still in control of my response to them. Luck, as a social construct, to me is a transference of internal fears, restrictions, and priorities in a seemingly socially-acceptable way to faceless outside forces, creating value out of not achieving something that a person wants while retaining the right to whine to an audience about it.

I might add, in the name of intellectual honesty, that we do have a poor track record of public information regarding the true cost and true lack of compensation that public figures receive. Many Olympians pay for their own training and trips to the Olympics, needing to find sponsors to win the gold, then getting handed an income tax bill by Uncle Sam for the value of the medal, curiously lacking any cash compensation. Conversely, a select few get massive endorsements. The road is filled with dead bodies of artists, authors, musicians, sports figures, actors, business leaders, and politicians who scraped by with a miserable existence until redeemed by explosive success. Marketing strategies prefer to hide the shame, so we come to believe that the road is paved with gold for many, and just not us – we must be doing something wrong. These are flatly incorrect, biased, and nuanced feeds of data, and drive the belief that a select chosen few are in the proper club to be blessed, and life for the rest sucks, hence the deduction that luck must be the driver. In my case, I will not stoop to competing as to who has more negatives, though rest assured that I do not spend all of my waking hours in a plane taking pictures of the best sites on only perfect weather days. Wait, never mind, please believe that I do and then buy some of my books!

Now that my little bout of socio-actuarial bitchiness is over, this flight was another “Down There” (refer to post by the same name), wandering around the non-homogenous indescript middle sections of Catalunya, which defy my every attempt at some element of geographical and political taxonomy. For the masses: it was a pretty day and I wanted to fly to a spot I saw on the map.

Cadí-Moixeró – unplanned diversion up into the wind and cold. 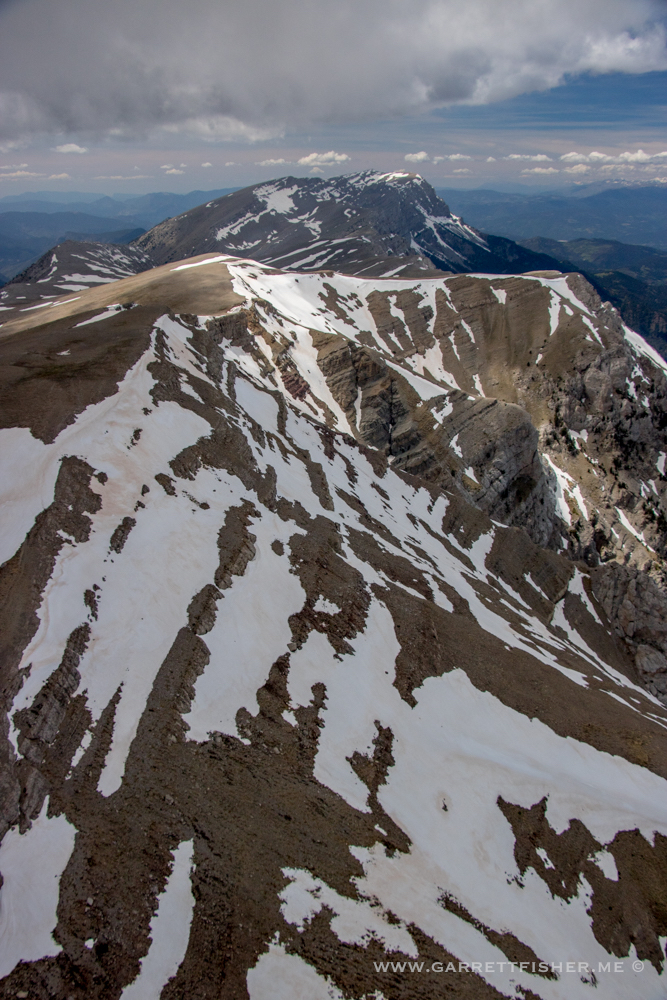 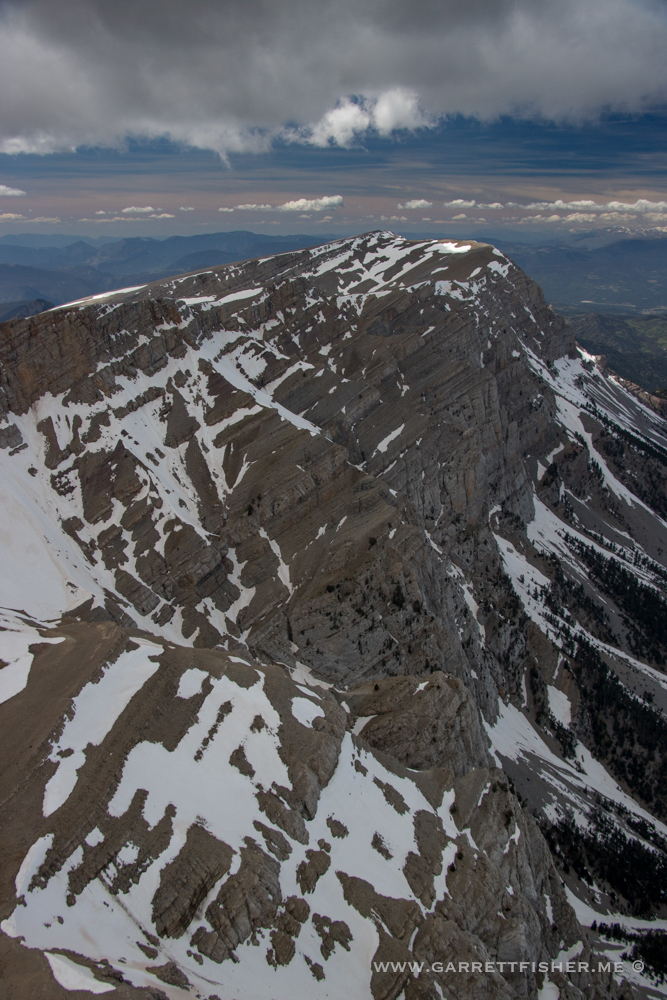 Serra del Verd – looking “down there” into the uncategorizable never-never land of central Catalunya. 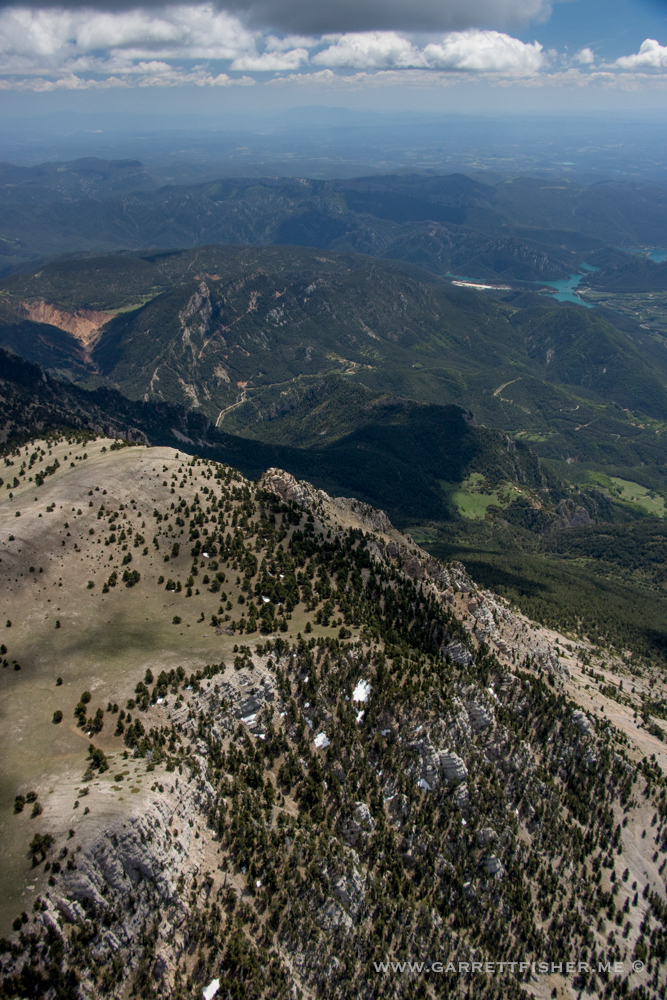 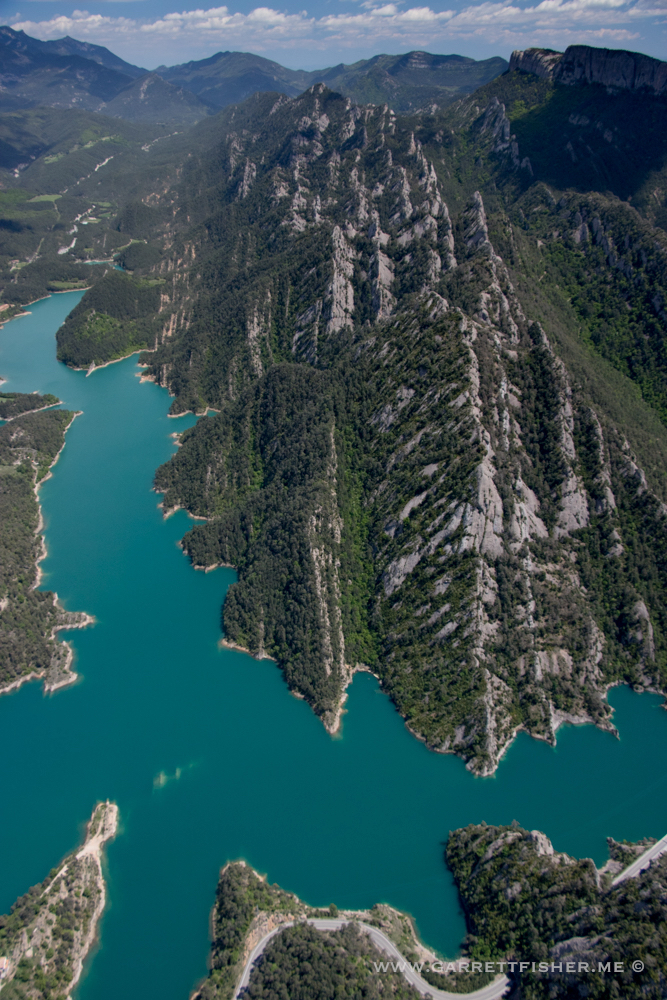 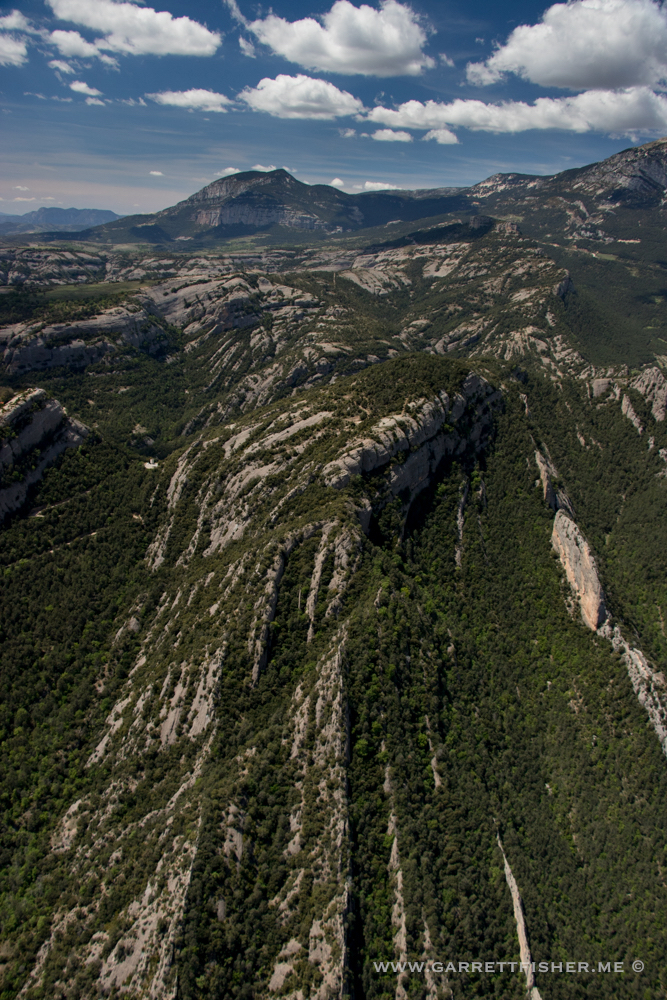 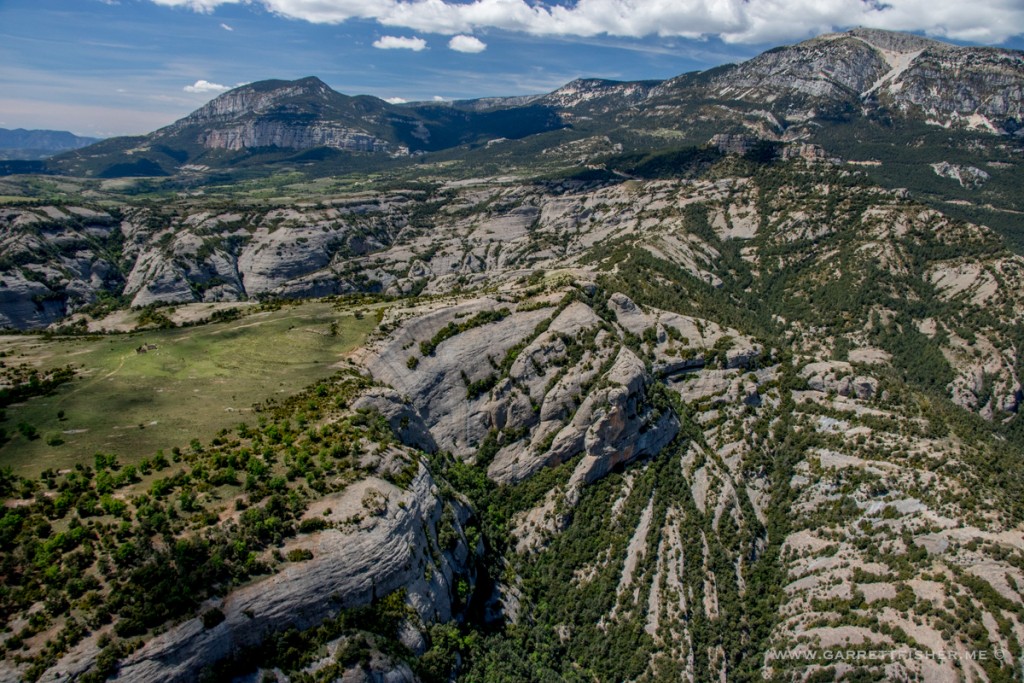 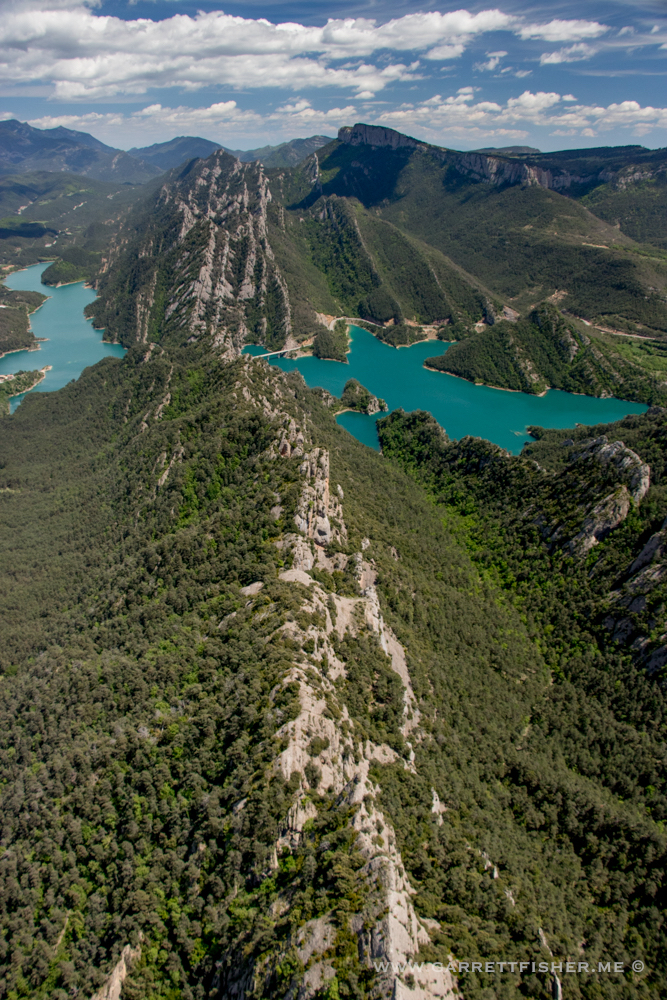 There is generally something anomalous going on in the Iberian Peninsula. 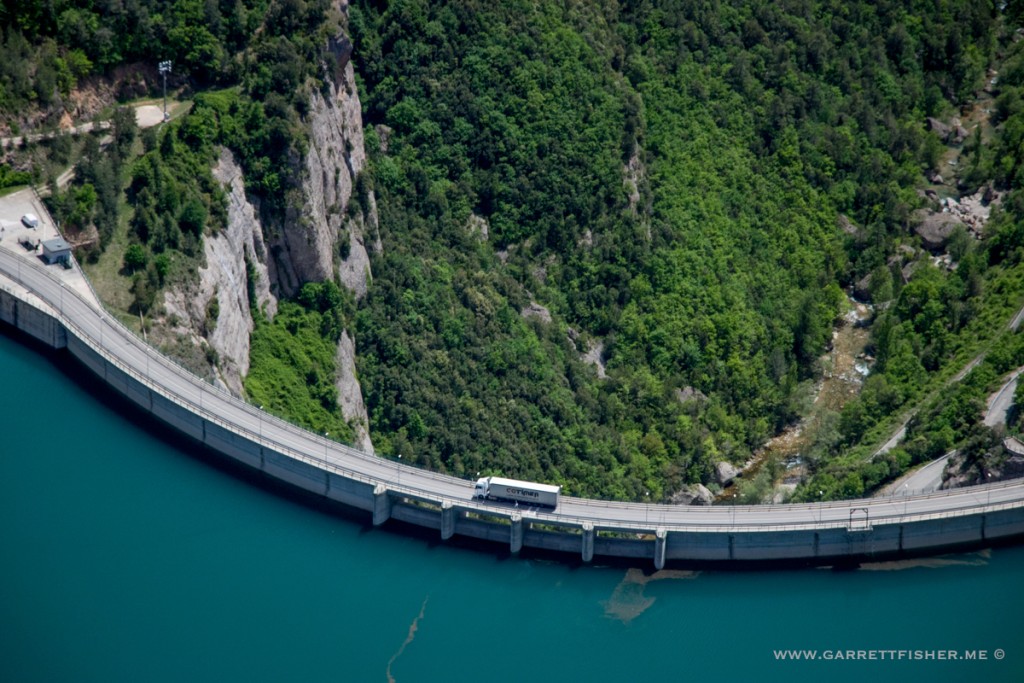 This road says a lot about culture. Spain categorically makes short-term decisions to go around obstacles. America would level this whole thing, put a straight road in, and ask questions later. 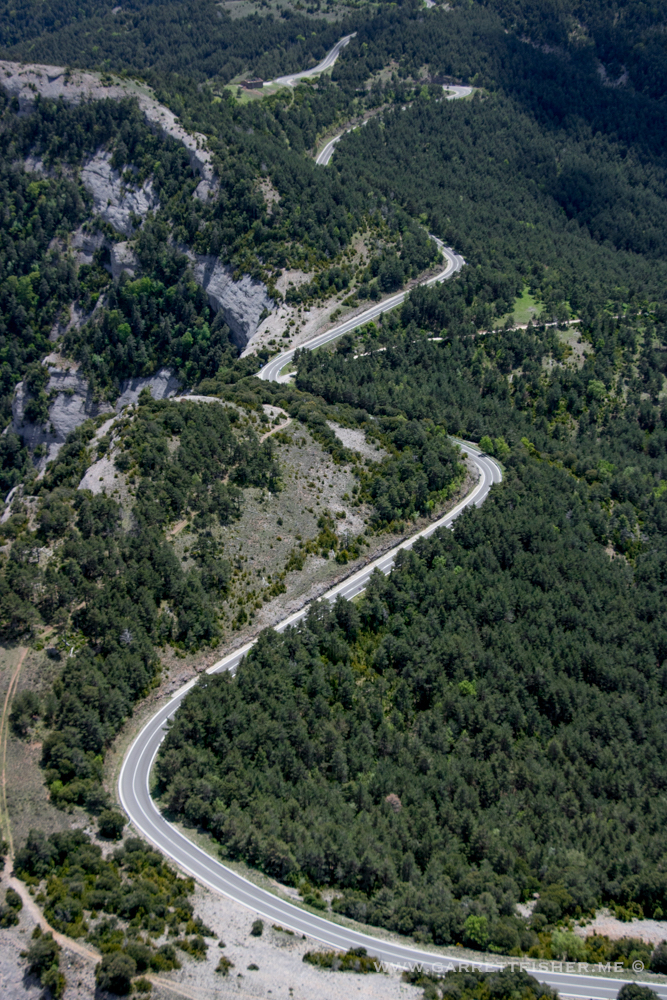 I am tempted to call this “quintessential Catalunya,” but by who’s definition? This looks more like Upstate New York, where I was born, than any stereotypical picture of a Mediterranean nation. 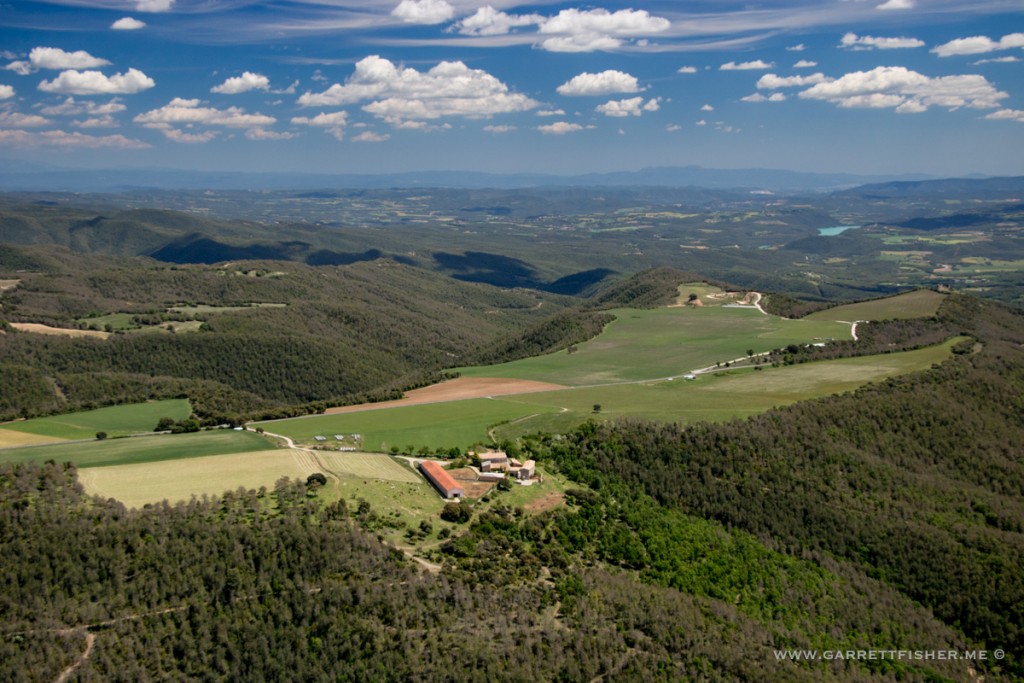 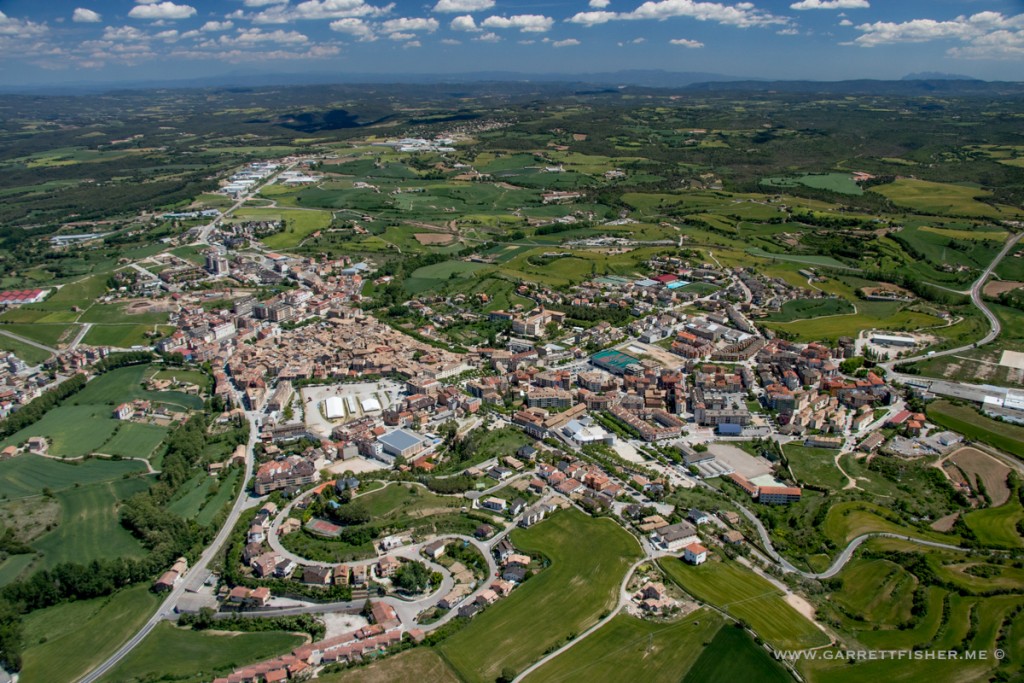 Wealth next to a collapsed building. The haves and have-nots. 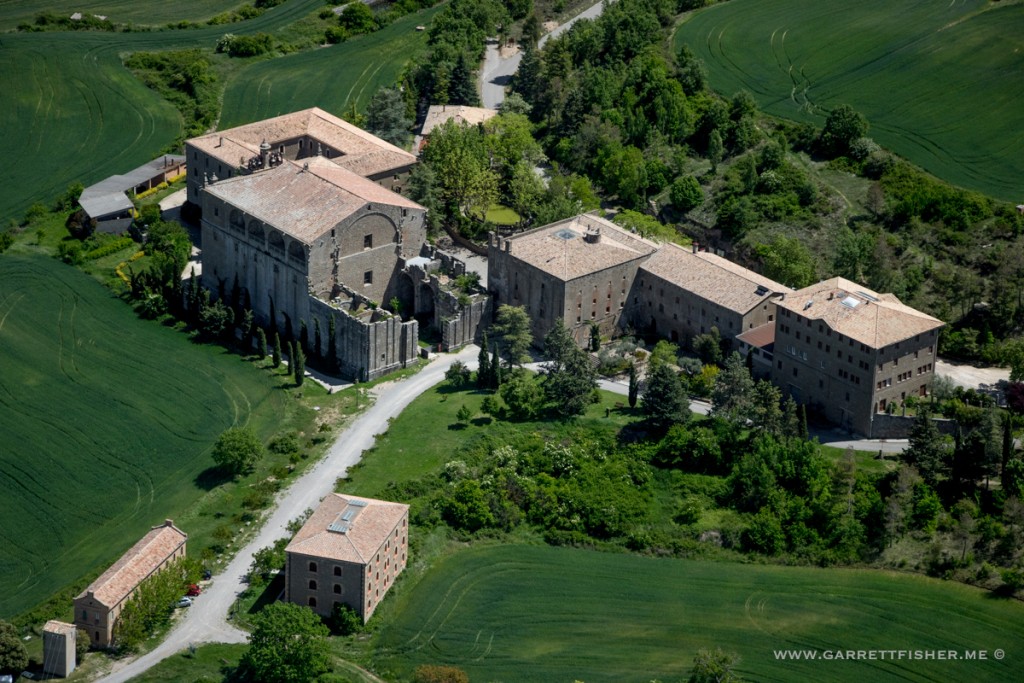 I came to see this feature, though I am ultimately too close to it. The details are obscuring the patterns as seen by a satellite. 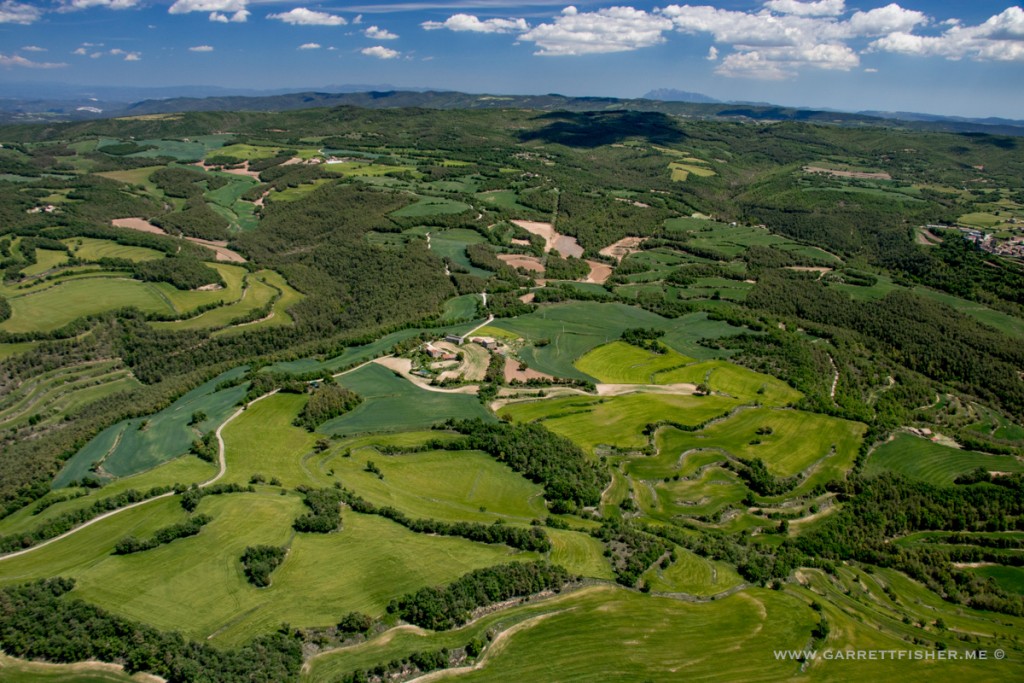 This is Calaf “airport,” literally. The cowling is open to cool the engine during the pit stop. 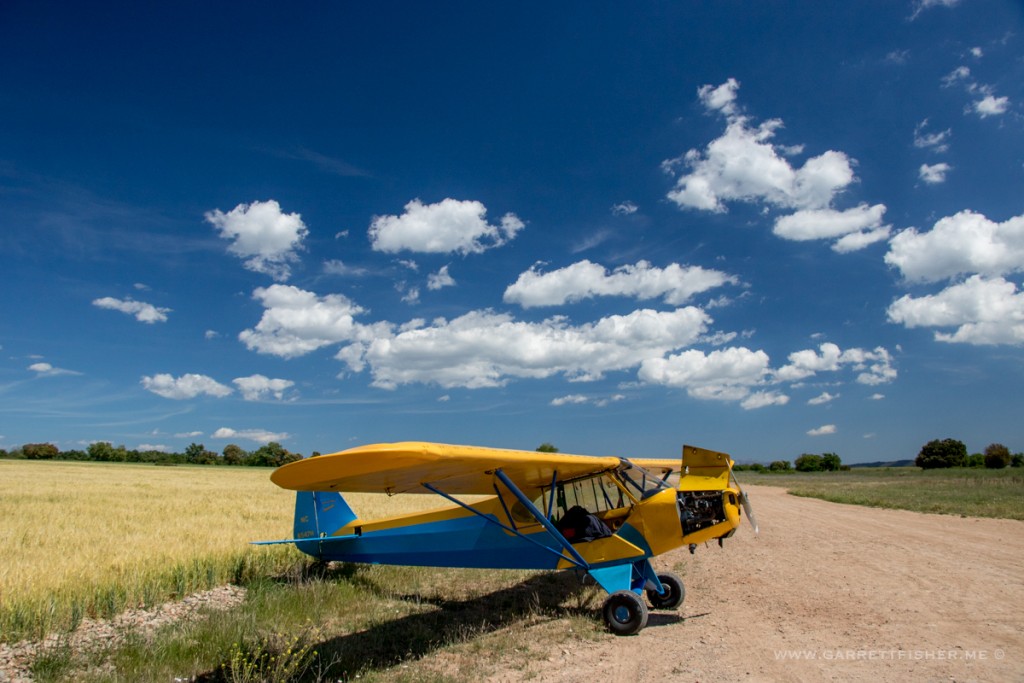 Montserrat in the distance. 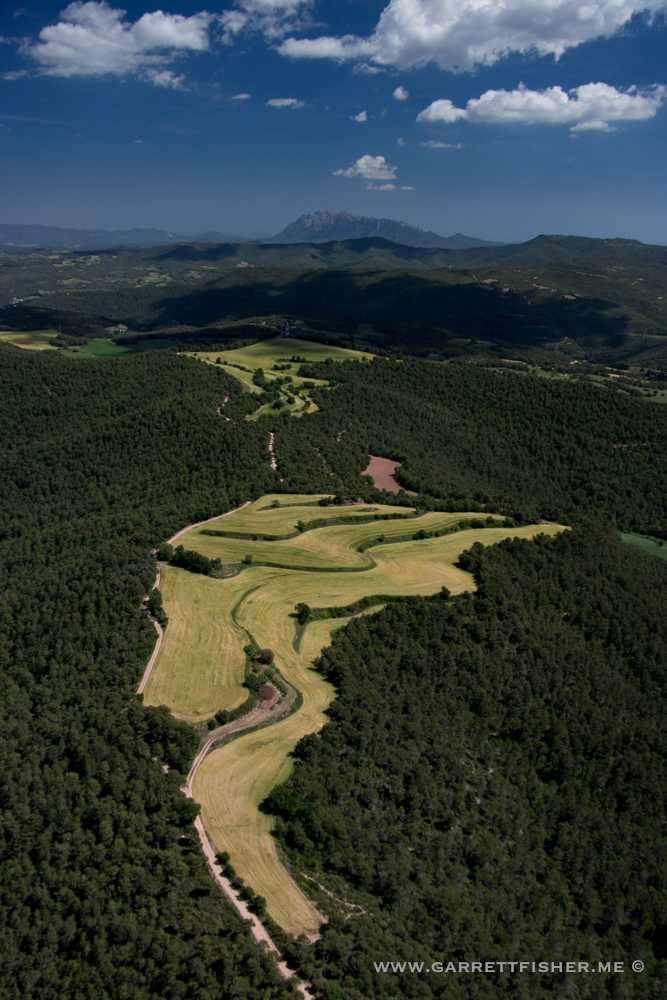 Is there a straight line anywhere in this country? 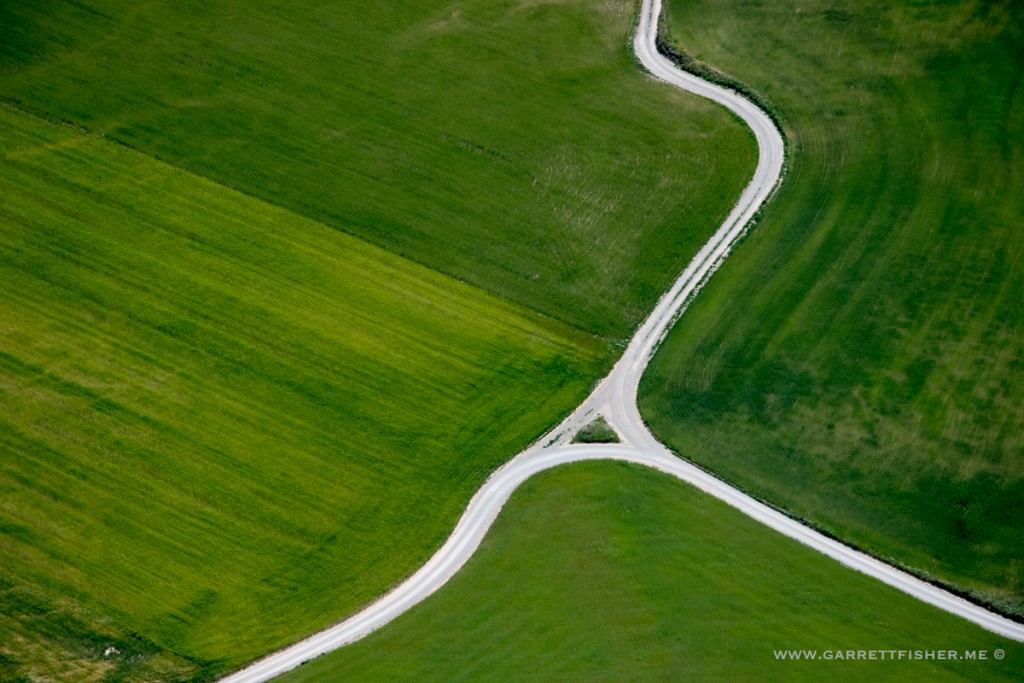 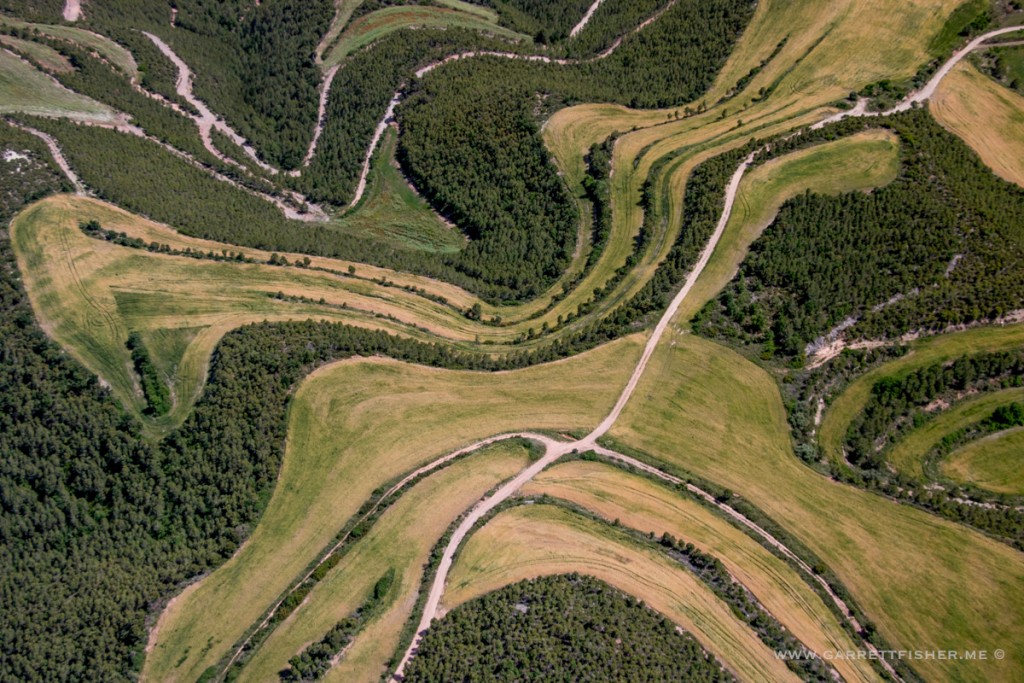 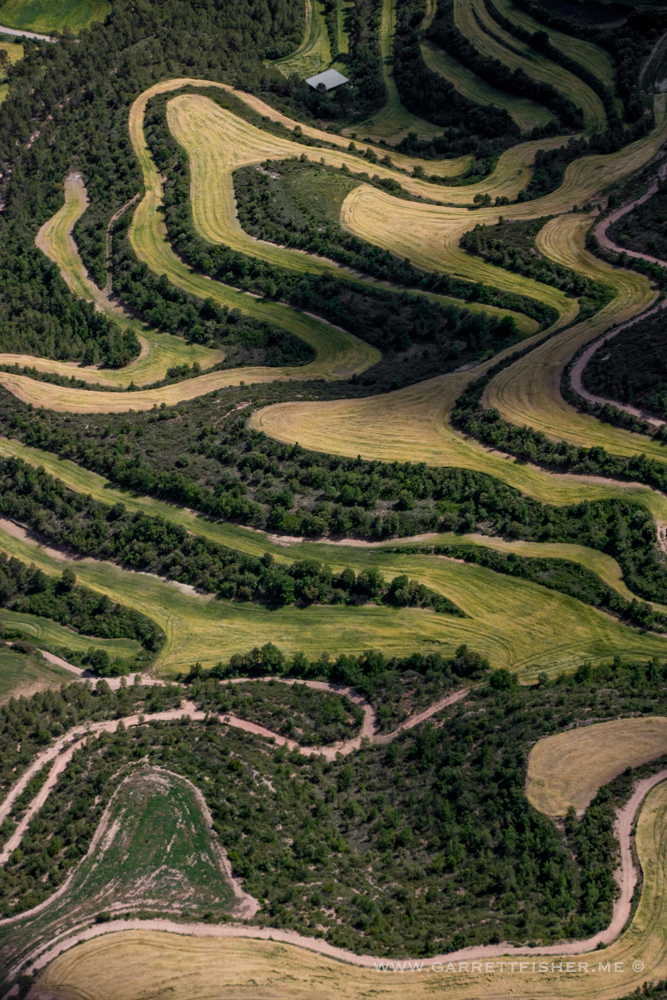 Some sort of mining activity. 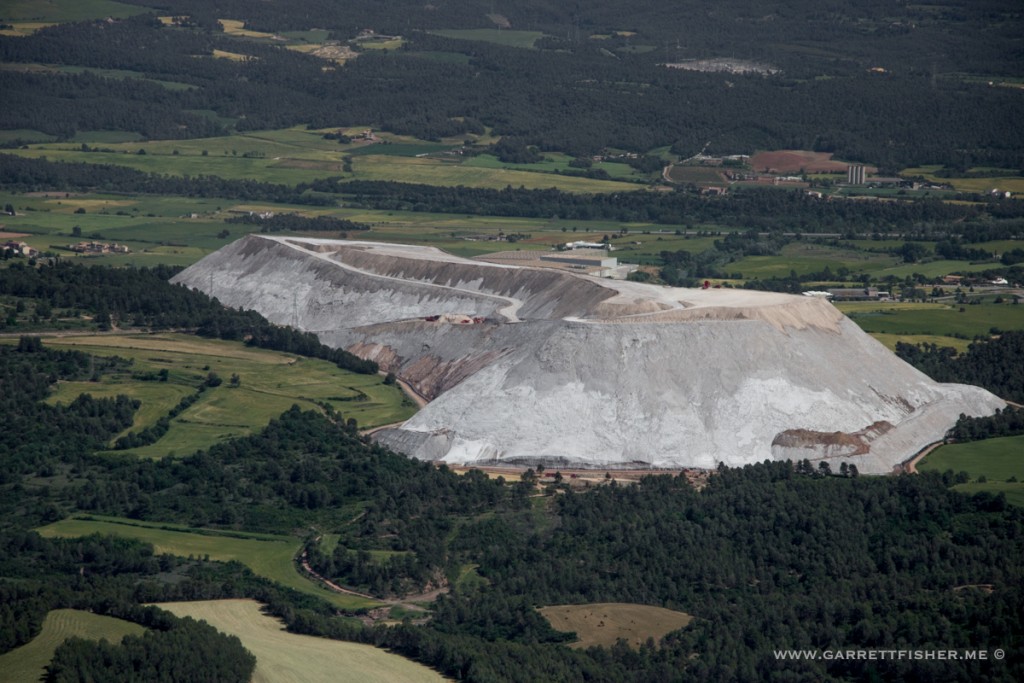 Berga. Apparently “berga” means “penis” in Argentina, but not in Catalunya. 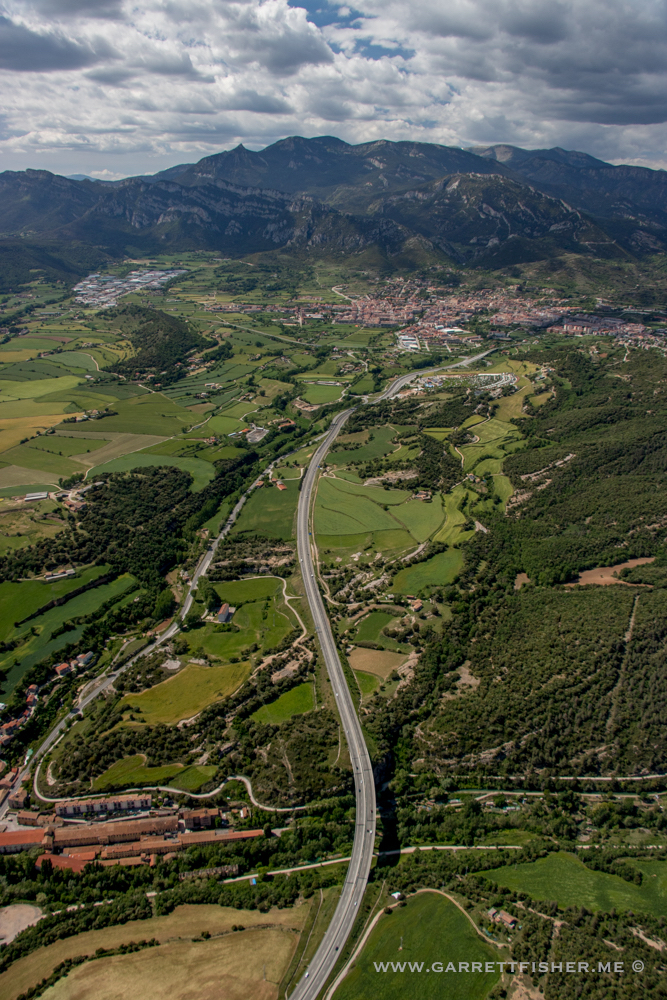 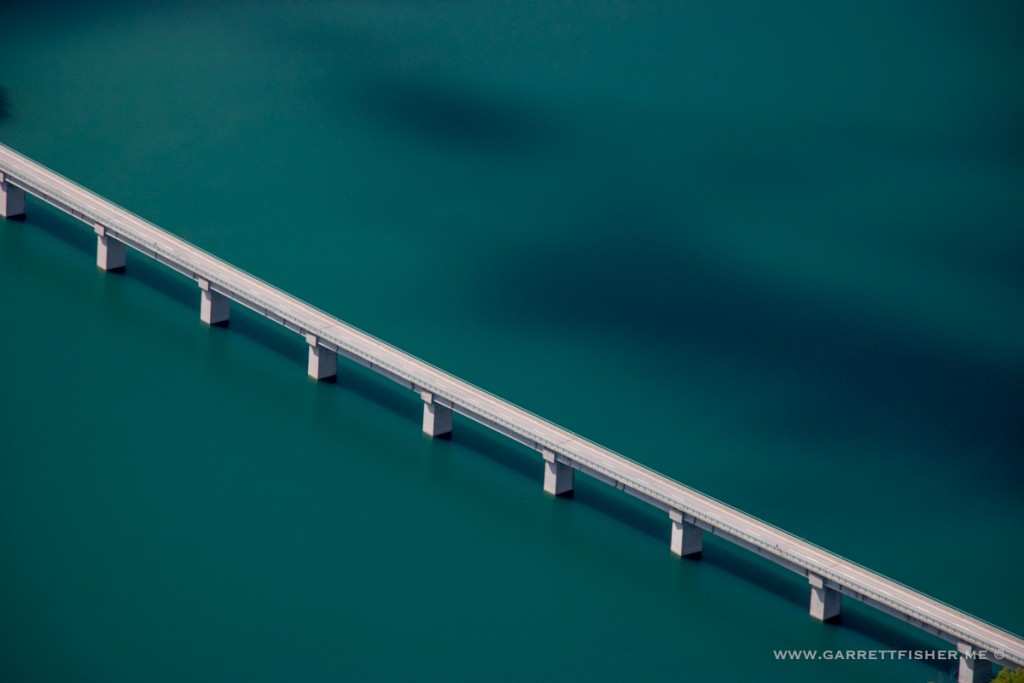 Serrat Negre. I haven’t figured out why some hills are “Serra” in Catalunya and others “Serrat.” 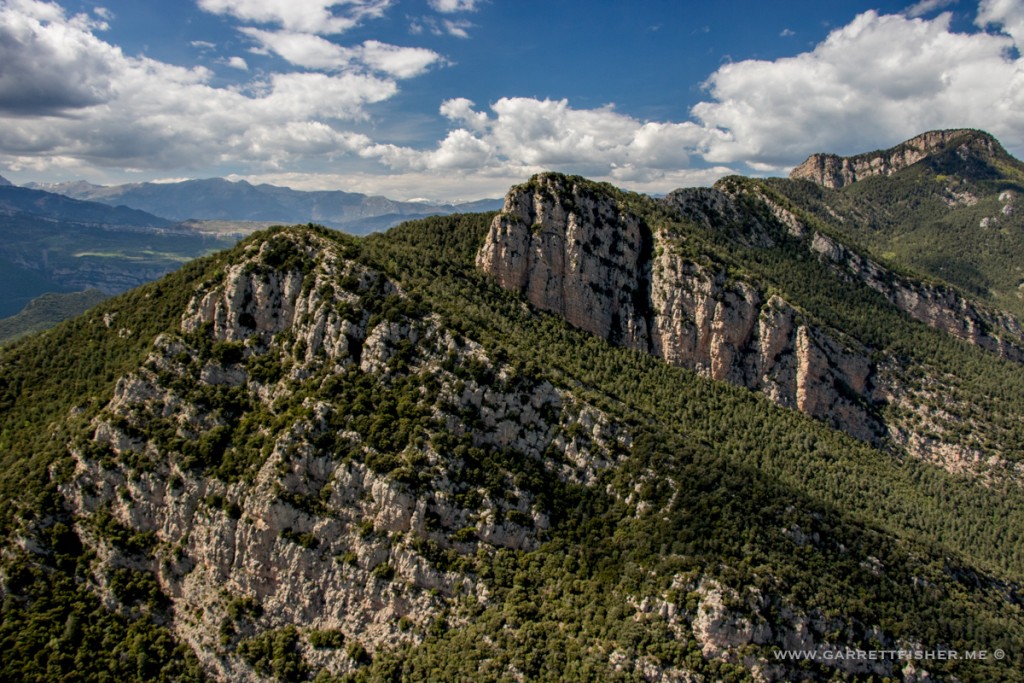