After nearly a month of exhausting mechanical aggravations, it was time to get into the air again. Aside from some maintenance cycles and part replacements, it was discovered that a highly expensive brand new part of the engine that was installed earlier this year had failed, in a really bad and expensive way. Thankfully, it did not impair the functioning of the engine in flight, so it was a matter of time and money.

Before our move to the coast, I had one last flight on my to do list. While I had gotten a number of photos of the Black Mountains and the 3 peaks around Roan Mountain, I only had them on cloudy days. The clouds create texture, something difficult to get, yet I had nothing of this range that was free of clouds. It is one of three features in the Southeast that mimic terrain in the Rockies, something that can only be seen on a clear day, taking the entire range into view. Thus, an additional flight was needed to get it.

It was a cold morning upon takeoff from Lincoln County Airport, even though I was wearing two coats. The airplane is quite drafty, and the heat is about as useful as a candle in the breeze, so it’s a matter of endurance. There was a dampness to the air that made it much worse. I couldn’t help but ask myself: I flew the Rockies in Colorado, in winter, and I am cold when its 38 degrees out? This makes no sense. I later found an explanation, as I cleared what I call the “skank layer,” which is the layer of haze and human pollutants, to clear air above. That layer is of varying depths and today it was at 5,500 feet. Above 5,500, it actually felt warmer, which is an indication that moisture was trapped down in the skank layer, making it feel exceptionally cold. The first thing in flight of note was that South Mountains was in peak fall color, at about 2,200’ elevation. Slightly ahead of Charlotte, yet lagging behind the mountains themselves. 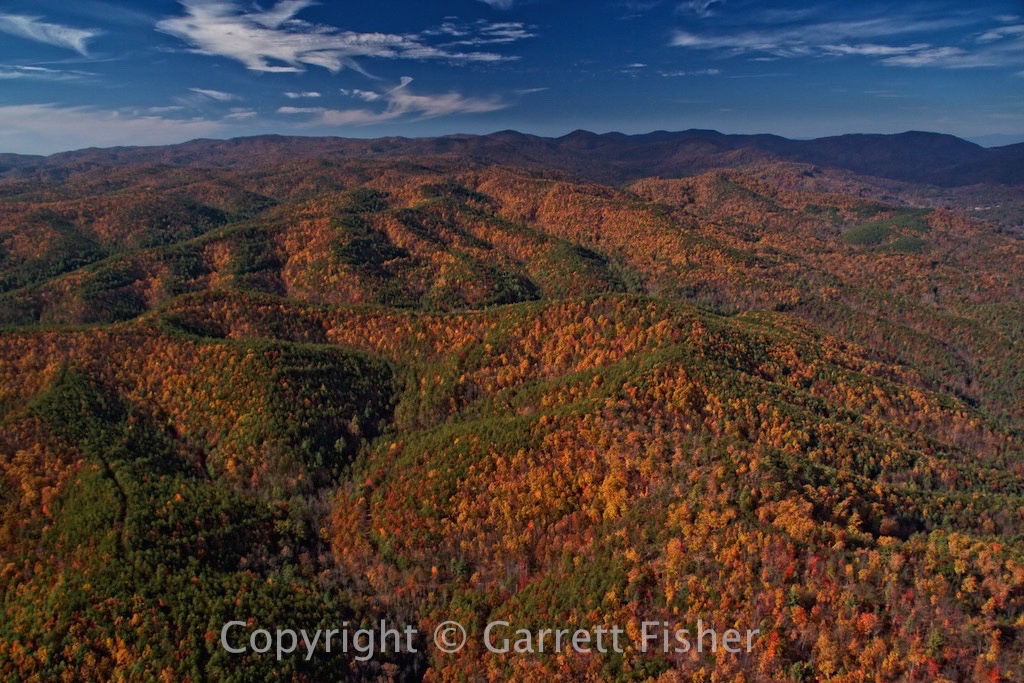 Next up was Linville Gorge, which surprisingly had some remaining color in it. We went up to Wiseman’s view the day after the flight, getting a ground view of the gorge on a clearer day. It had been intended to visit Table Rock and, alas, it was closed for repairs. 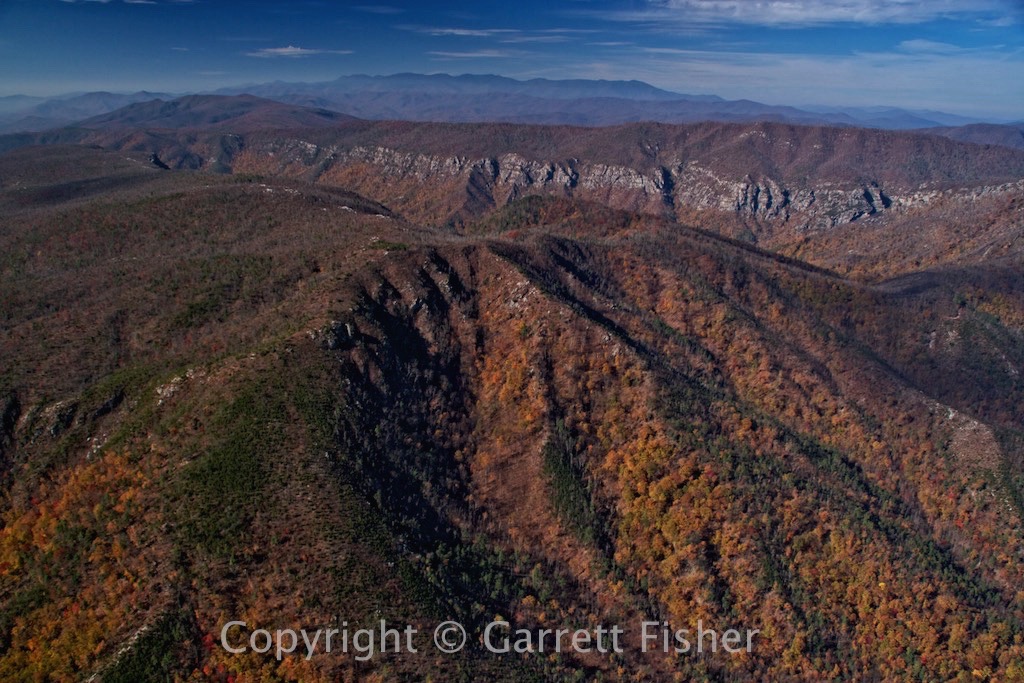 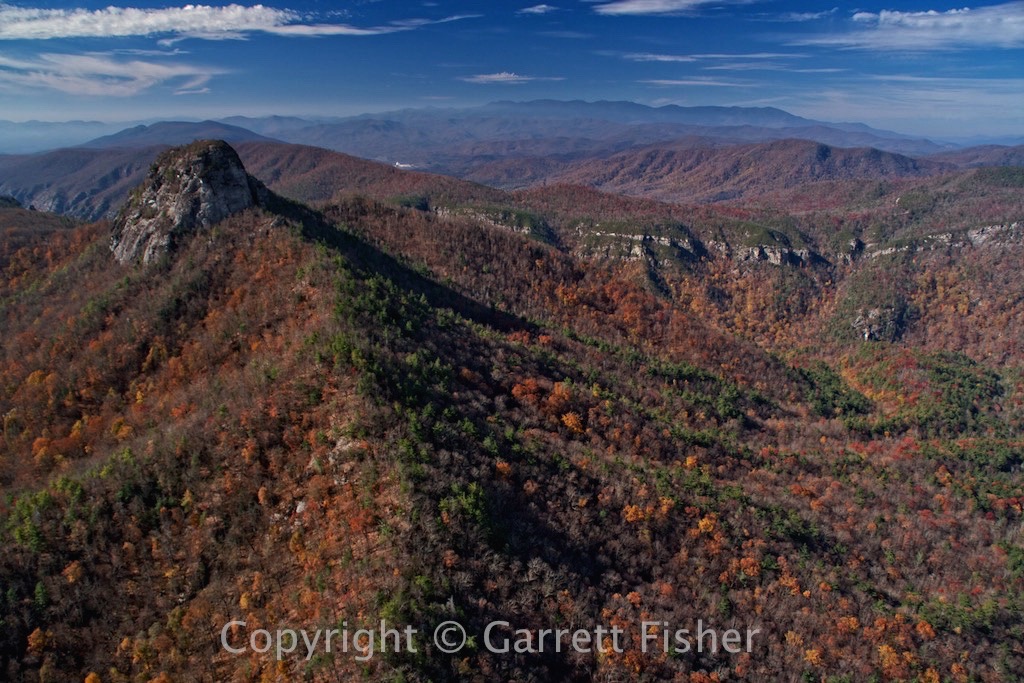 The Black Mountains worked better than I thought. I expected more turbulence due to the speed of the upper level westerly winds and, again, there was only light wobbling near the peaks, which defies the loud warning on the navigation map. I suspect that turbulence is actually worse at higher altitudes and higher speeds. When I get near terrain, I slow it down to 65mph, to prevent damage to the airframe in case of getting whacked around by sudden winds. While the wind was blowing, it allowed almost a hovering maneuver, where I could slowly creep along the ridgeline, getting pictures as I go and flying slowly into the strong upper level wind, holding the plane in place relative to the ridge, allowing progressive photography of each mountain peak with good backlight. There was rime ice from two nights prior, and still some snow either from the storm a week prior, or from some snow showers two nights ago. 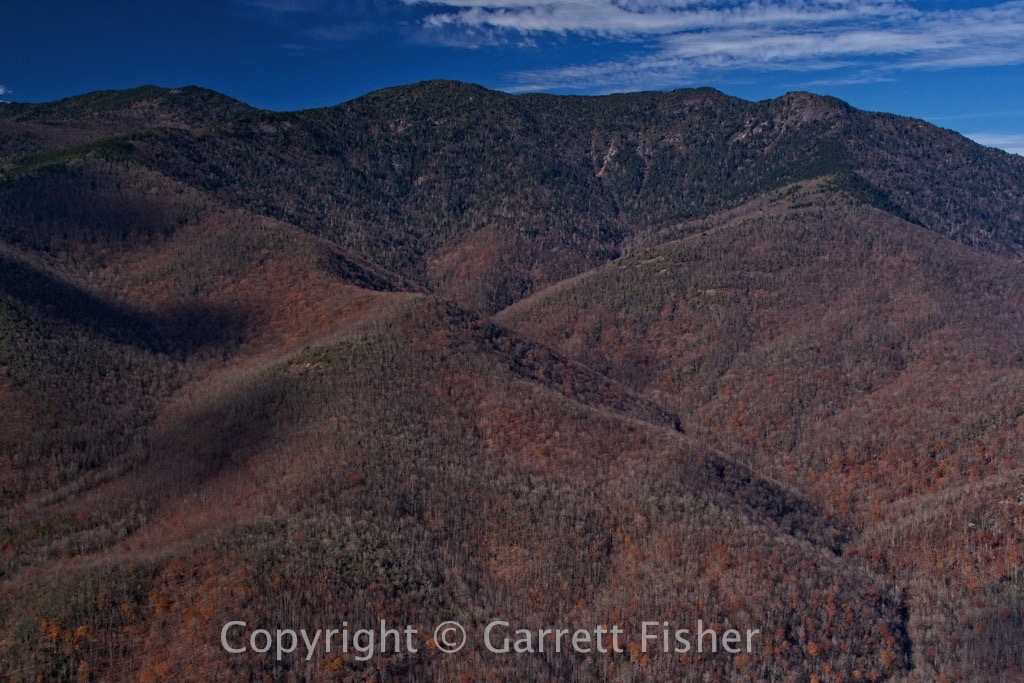 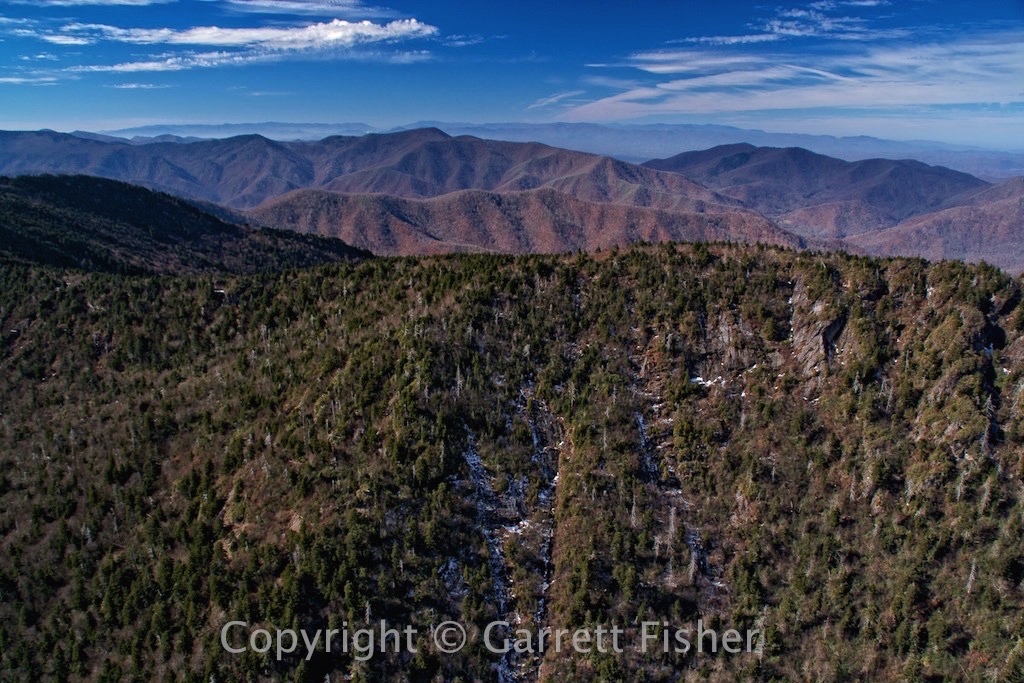 Roan Mountain was next, a quick 10 to 15 minute hop north. Again, rime ice was evident in the shadows, as well as some lingering snow from last week and a lighter dusting from recently. Hikers were out in abundance at Roan High Knob, a beautiful section where there are no trees, some rocks, and sweeping views of Tennessee and into the North Carolina Mountains. 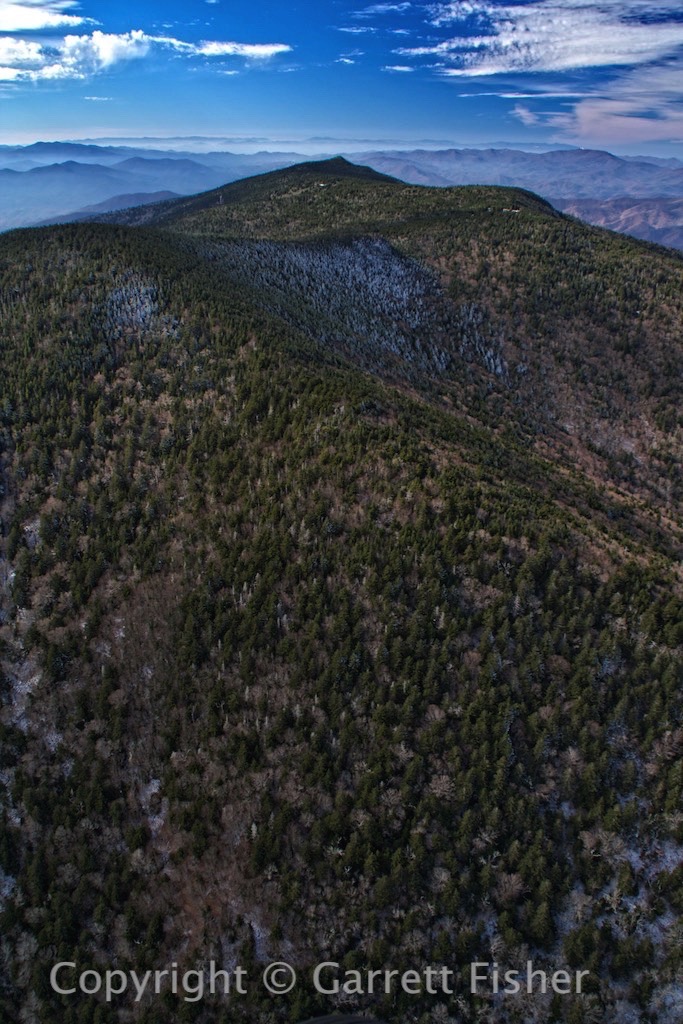 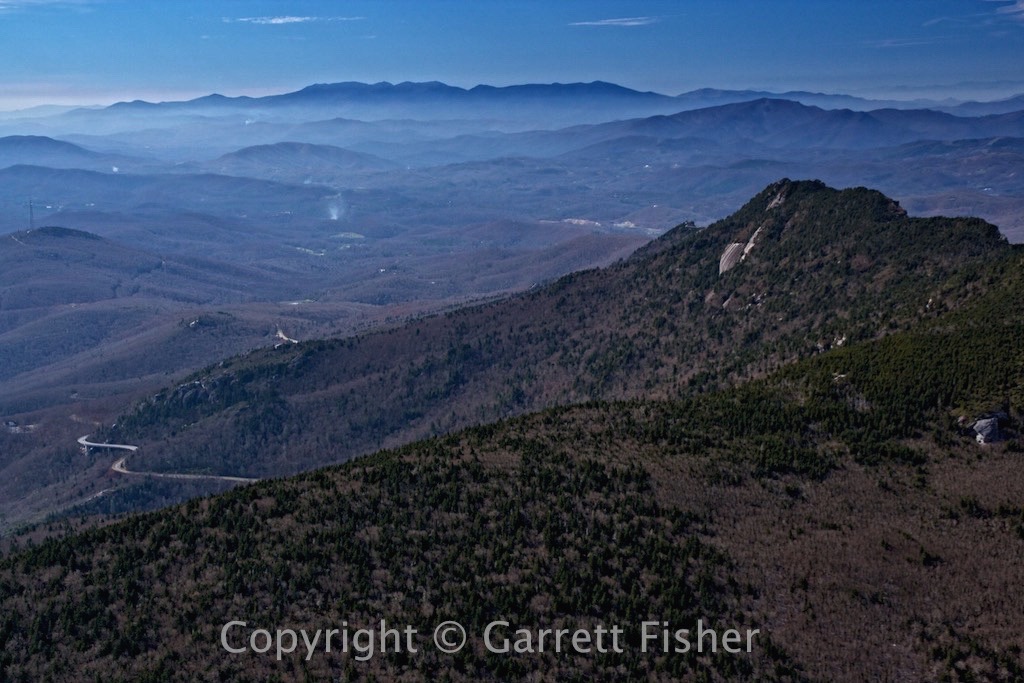 Passing Beech Mountain and coming up to Sugar Mountain, I saw that ski season was already going, with fake snow gracing the hill at Sugar, and people having a good time. From our year in Colorado, I must say that the shoulder seasons are the most fun, where one can ski with snow when there shouldn’t be any, or long after the temps have risen and it doesn’t feel right. Arapahoe Basin even has summer skiing, a truly awesome experience. Being the first this year in Colorado, A Basin opened Oct 17th, and here Sugar was operating on Nov 9th, in North Carolina! Pretty cool if you ask me. Stupidly, I don’t have a photograph of the fake snow. Grandfather was next, and afforded some excellent views of McRae Peak with the Black Mountains in the background. The entire flight lasted two hours and fifteen minutes, which is nearly a miracle, as I expected 3 and a half hours. There was a southerly wind at low altitudes, and a westerly wind and 6,000 feet, so I stayed low heading up and high coming back, effectively making the entire trip have a tailwind of some sort or another.

On getting back to the airport, I saw what looked like another PA-11 hanging out on the taxiway. Being that they are quite rare (1300 manufactured, 600 registered in the US now, likely 300 or less flying), seeing another has only happened once, and that one was in a different paint, electronics, and engine scheme than mine. This one had the same paint job, and looked the same otherwise. In a conversation with the individual that owned it, it’s an original from 1948: original Irish linen fabric, original paint, original engine. I must say, it is probably the only one out there like it, having never been restored or overhauled given its age. The fact that it is still flying is a miracle. 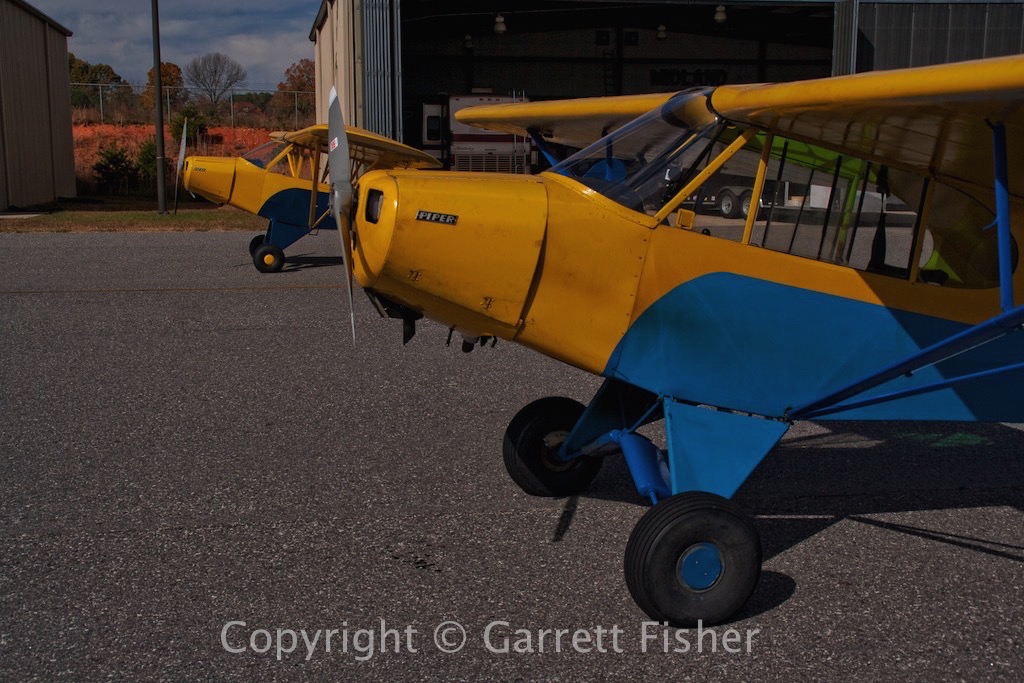