Finally! The “quintessential” fall weather that defines the Carolinas: bright blue skies, dry air, almost unlimited visibility. A strong cold front roared through and blew the summer haze out to sea. On Saturday, winds were too strong and clouds still hanging on in the mountains, formed as a result of upslope wind conditions (ironically, the very cold front that clears the air creates some clouds to be dealt with). Thus, we elected to head up to Blowing Rock for the third weekend in a row. This time, we did something we had always wanted to do: stop and hike around Price Lake. It’s a beautiful lake when whizzing by on the Blue Ridge, and its even prettier to stop for a minute and take it all in. The path is 2.5 miles around the lake, pretty much flat, and goes through some interesting plant foliage. Thick rhododendron forests alternated with mountain deciduous, weaving in and out of views of the lake. It was as close a natural Japanese garden as I have yet found. 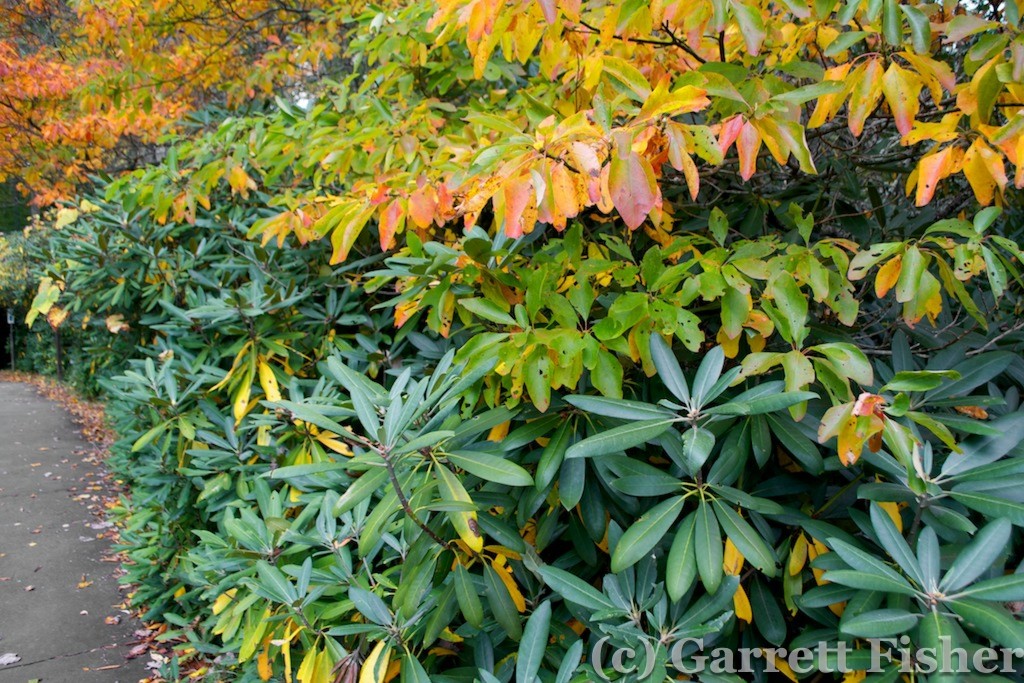 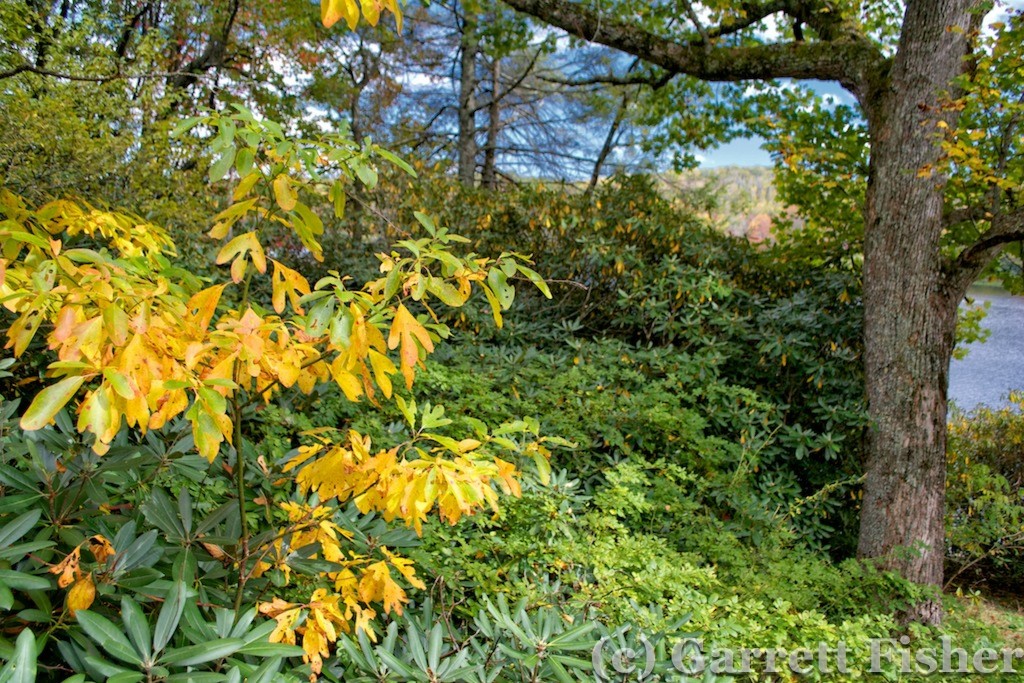 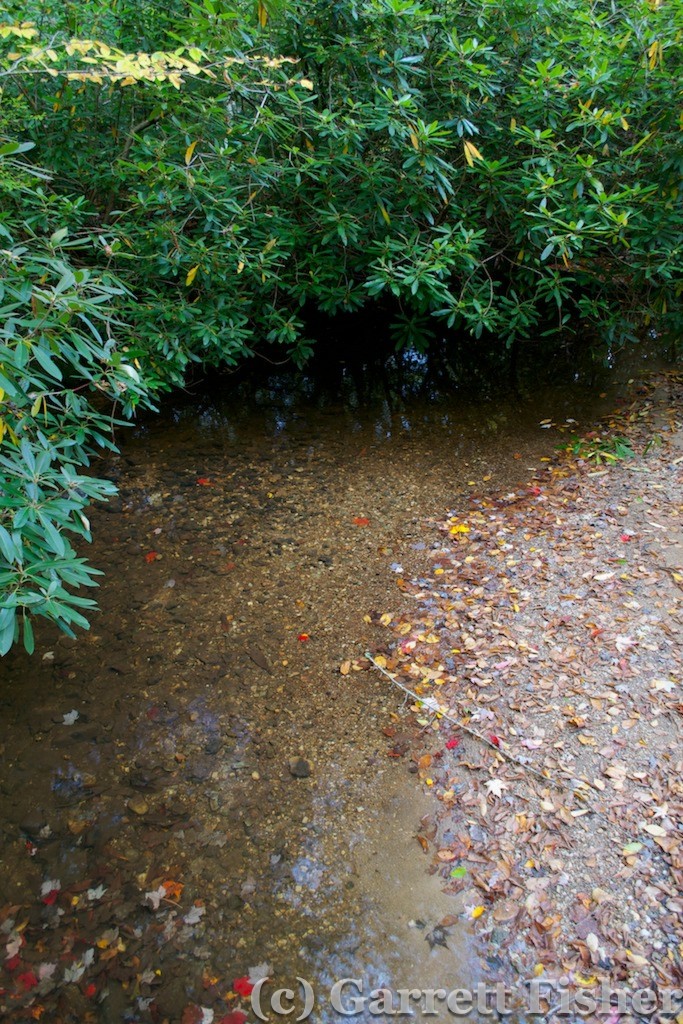 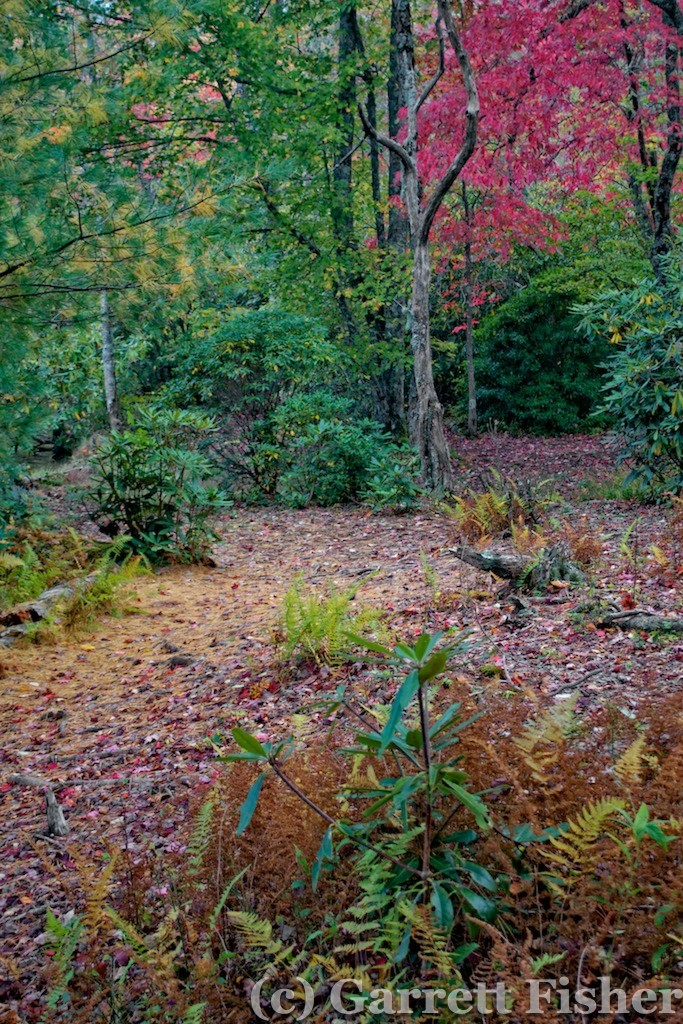 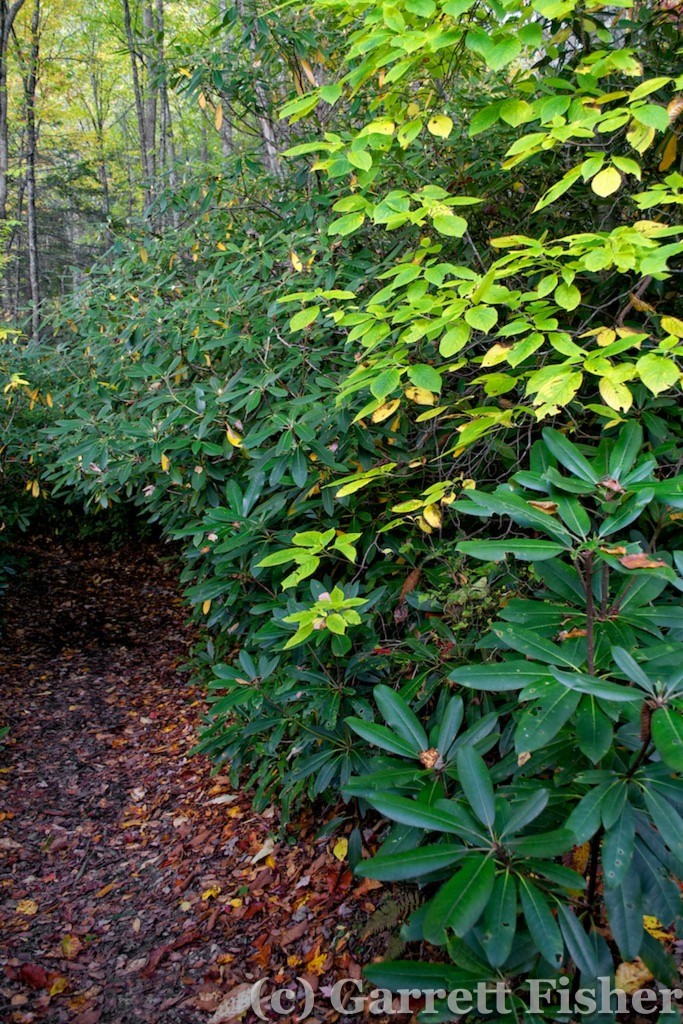 Sunday was the better day, with less wind and no clouds to deal with. The plan of flight was to head straight west, clipping the Balsams, and arriving at the Cherohala Skyway. That would be followed by traversing north to the Great Smokies, and then a turn to the east to clip the northern part of the Balsams, followed by the Black Mountain Range and then heading home.

Things went about as planned. I flew over Forest City, NC to check on Facebook’s data center construction for Wired magazine, then northwest over Lake Lure, alongside Chimney Rock, and right through Hickory Nut Gorge. I didn’t know what was on the other side, as I had try to fly through once before and it ended with an aerobatic maneuver to escape snow showers and a downdraft coming through the gorge. Today was sunny, and I entered right at the elevation of Chimney Rock itself: roughly 2,500 feet above sea level. Ironically, that is about the terrain elevation on the other side, so I only needed to climb a small amount to head into the plateau that led to Hendersonville, NC. 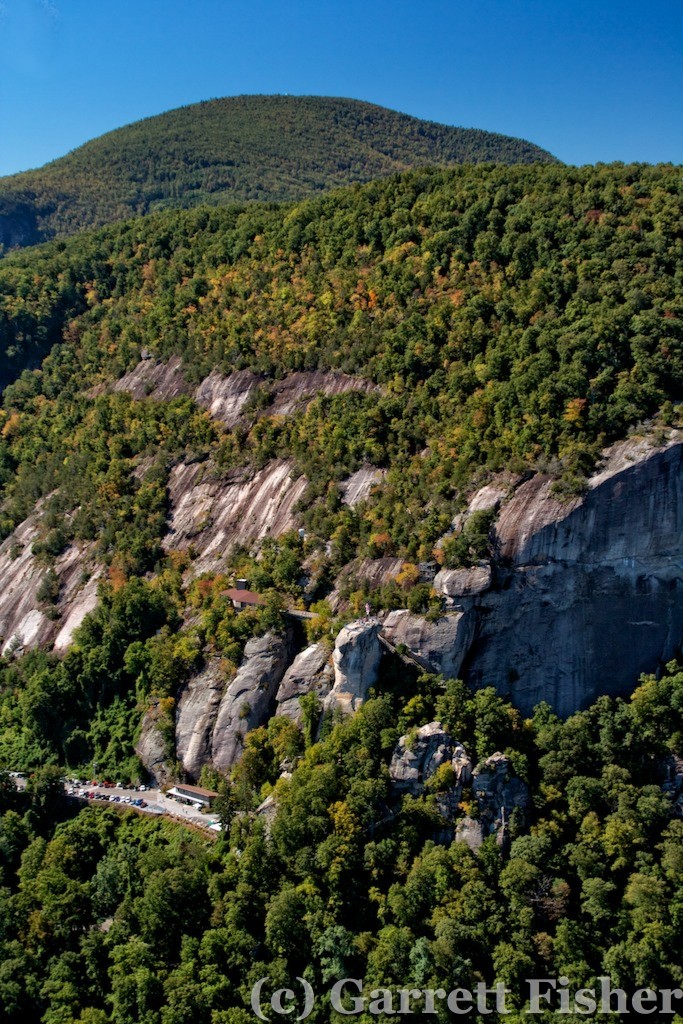 Passing west, the Balsams were clearly in good fall color at about the 5,400’ elevation, with a post-color look higher than that and pre-peak below. It was idyllic for photography, with crisp blue skies and highly illuminated mountainsides. These peaks will look quite nice in my book on the peaks over 6,000’ in the Southeast. Winds were manageable though present, and it was quite cold outside. The high in Charlotte was supposed to be 66, so it was easily 40 degrees or less at altitude, a common occurrence when the air is dry and upper level winds advecting cold from the west/northwest. 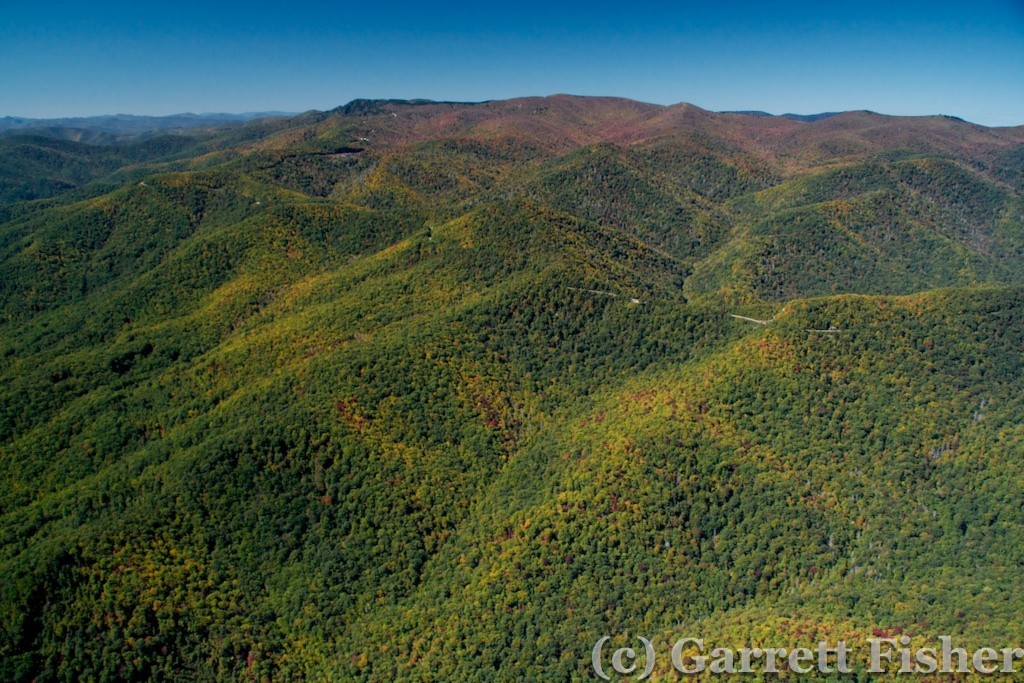 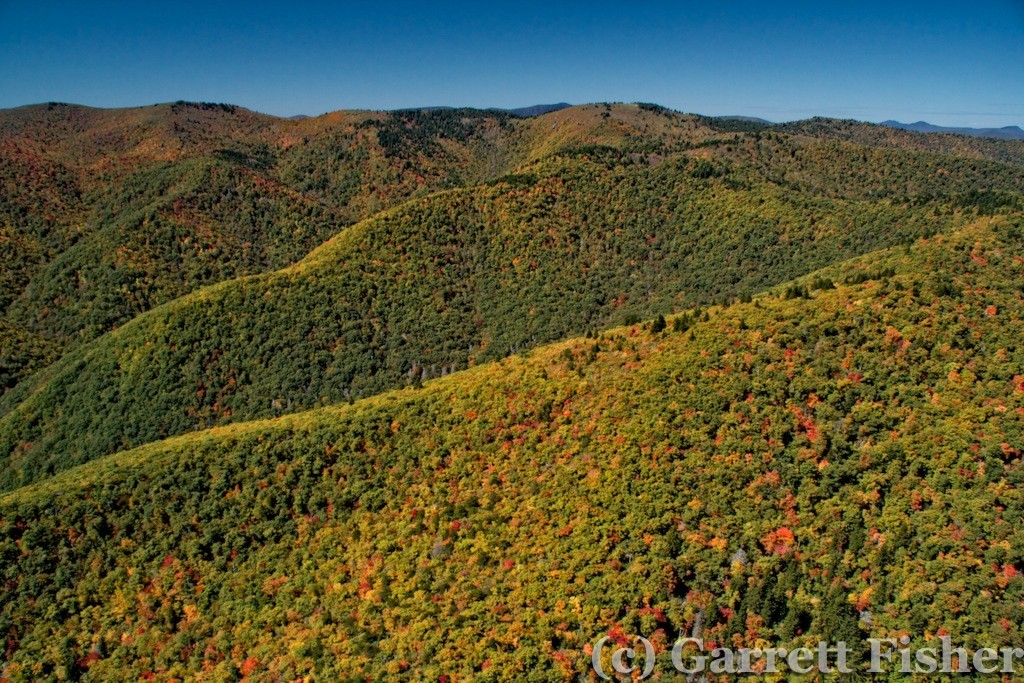 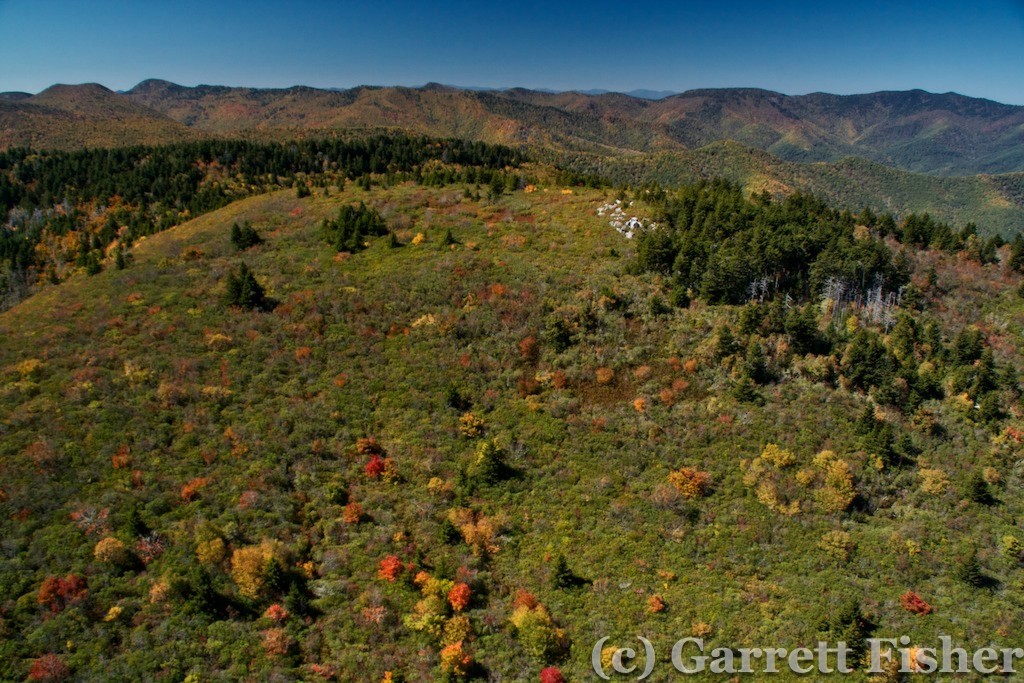 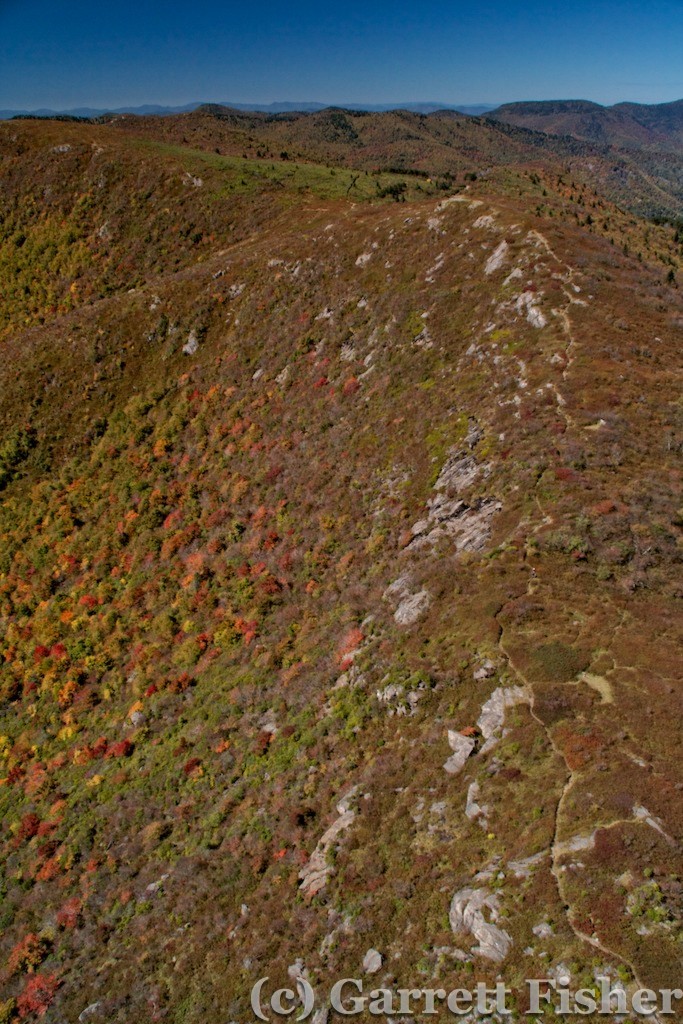 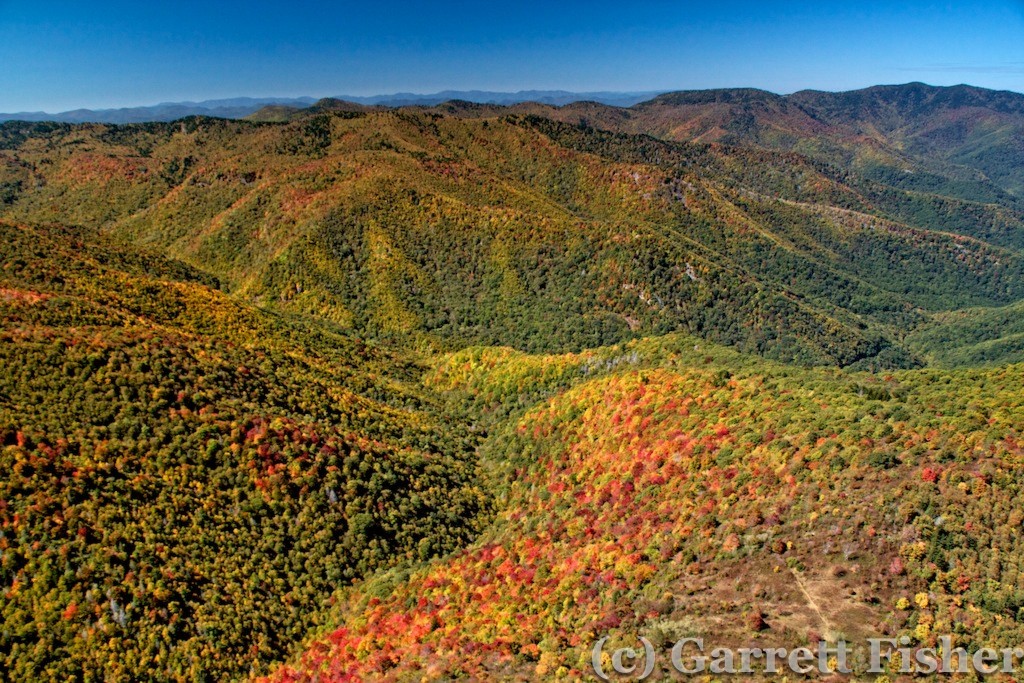 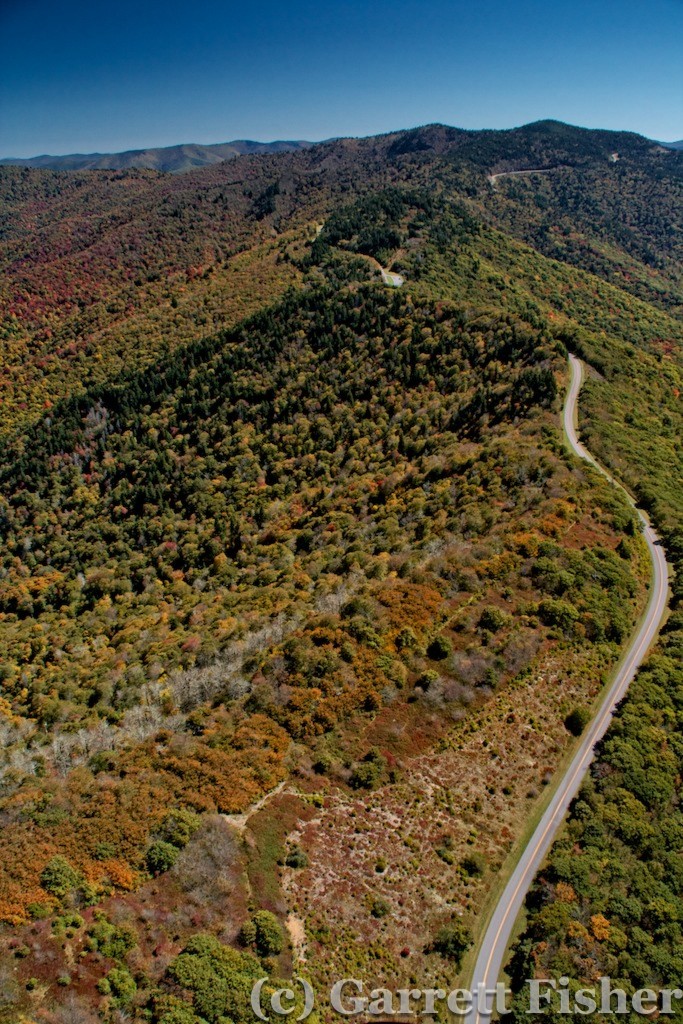 After the Balsams and the Blue Ridge west of them, it was a straight run to the Cherohala Skyway, in the far SW part of the state. While the terrain is not rocky, nor is there any spruce forest due to elevations being below 6,000’, it is a rugged section of the state, with thick forests and abundant wilderness areas. Cherohala Skyway was quite pretty, with sweeping and tight curves interlaced among contours of terrain and fall color. Regrettably, it was post-peak color at the highest elevations already, though the mountainsides again provided some nice accents. 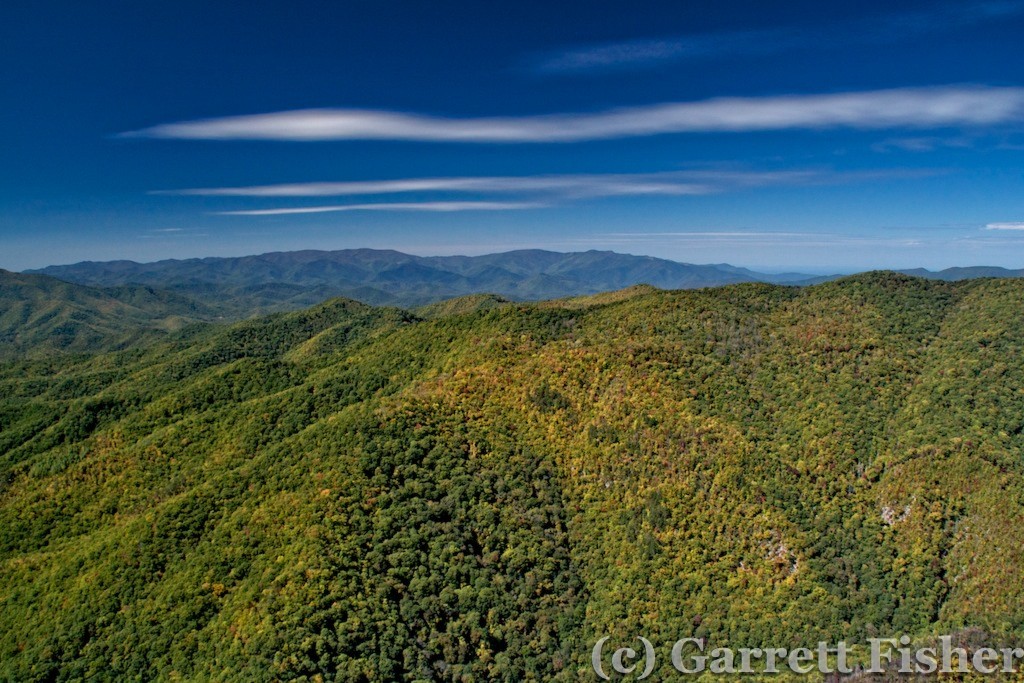 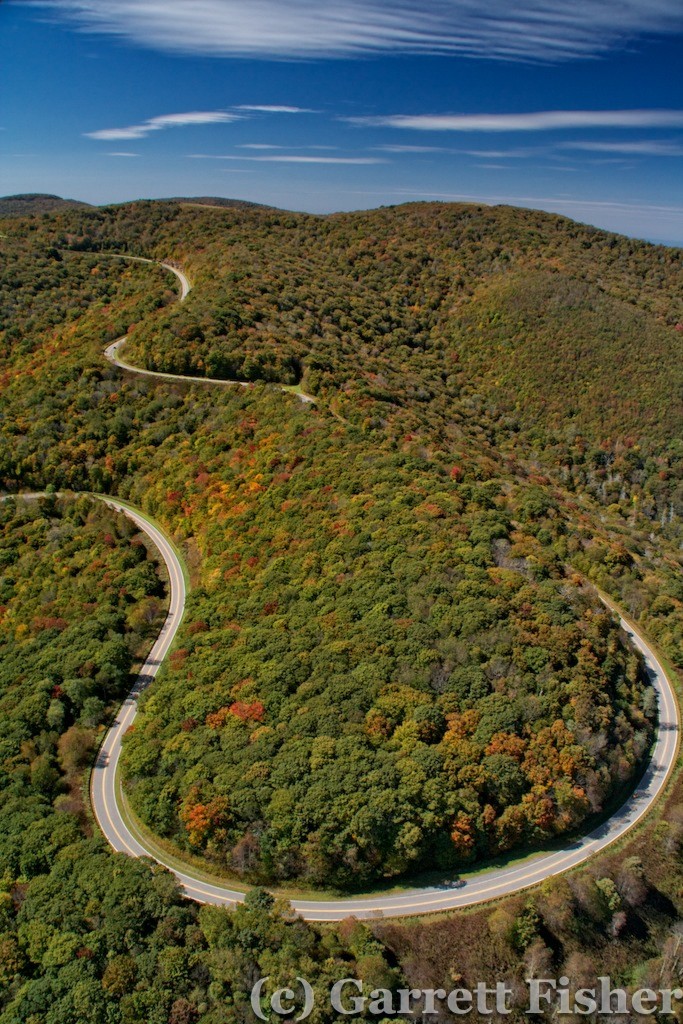 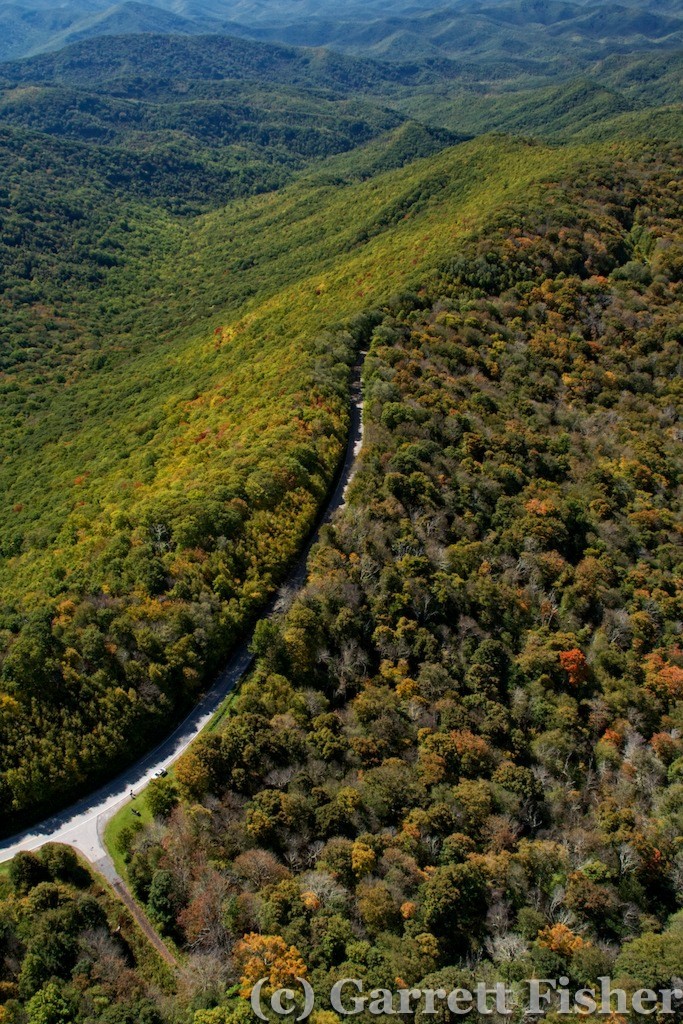 Passing to the north the Smokies had an interesting perspective coming in well lower than the 6,000’ peaks. As I had descended already, my goal was to get some of the peaks with a rather large prominence from below. The prominence is how much of the mountain is visible from adjoining terrain, and the Smokies have some of the best in the Southeast, as they ascend rapidly from the lowlands of the Tennessee Valley. I was glad to be in an airplane, as some of the park roads around the lower fields were stop and go. I came over Gatlinburg and then headed northwest to fuel up at Gatlinburg airport. While it was neat to see two helicopters and a biplane in action for sightseeing tours, the whole Gatlinburg-Pigeon Forge machination is despicable. Tens of thousands of condos, hotel rooms, golf courses, amusement parks, and cheap retail institutions whoring the beauty of the most visited national park in the US by capitalizing on the inherent inability of Americans to enjoy nature. Instead, they must be fed a nonstop dose of retail capitalist titillation. I did not photo the area specifically as an act of protest. Get a life people, go outside, and enjoy the purity of nature for once. 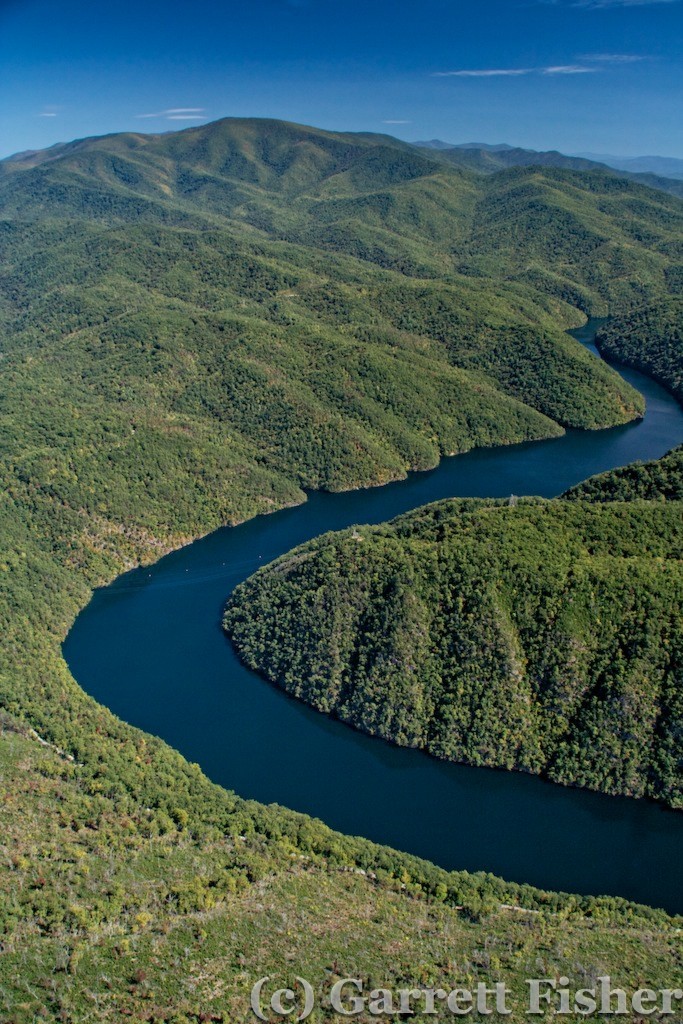 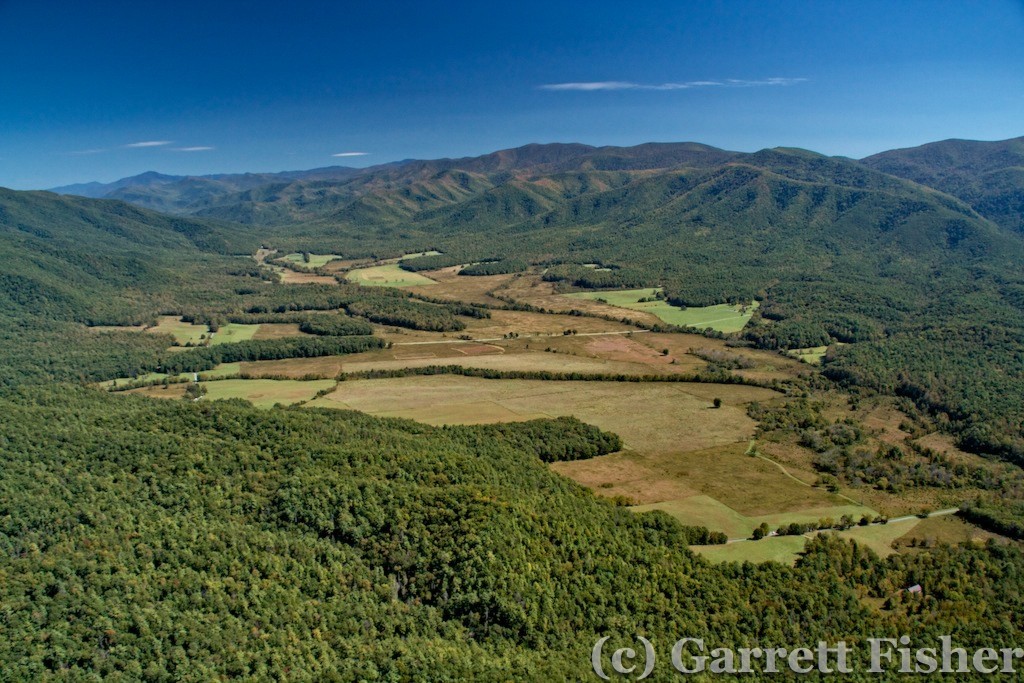 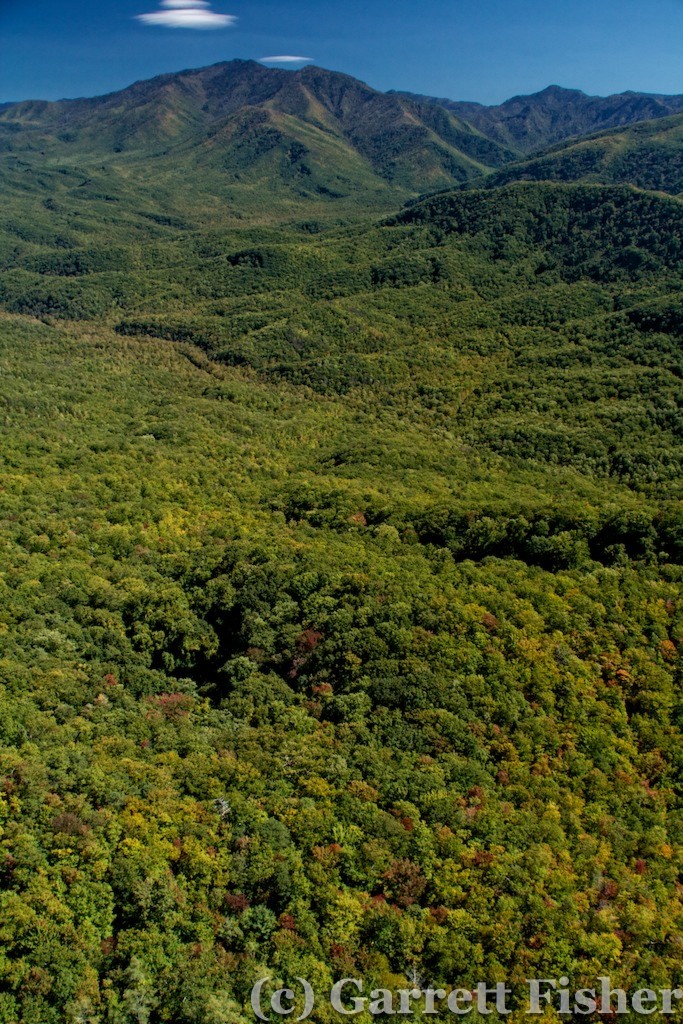 After fueling, it was some photography of the Smokies again, mountainsides while climbing in windward updrafts and then most of the peaks over 6,000 feet again. By now, the forecast proved to be inaccurate and the wind was howling, as beautiful lenticularis clouds had formed over the peaks, the result of winds getting pushed up and over the terrain into the dewpoint layer and then reversing course and coming down. The result is a cloud that looks like a lens (hence the latin cloud designation denoting the same), which is quite beautiful. Turbulence was almost nauseating, though manageable. 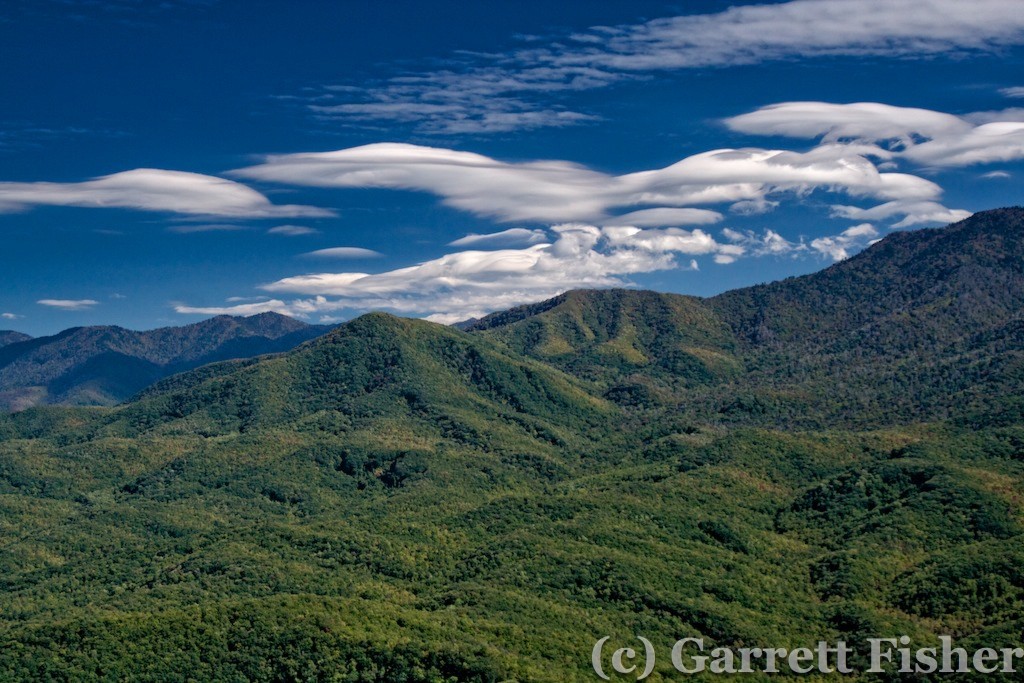 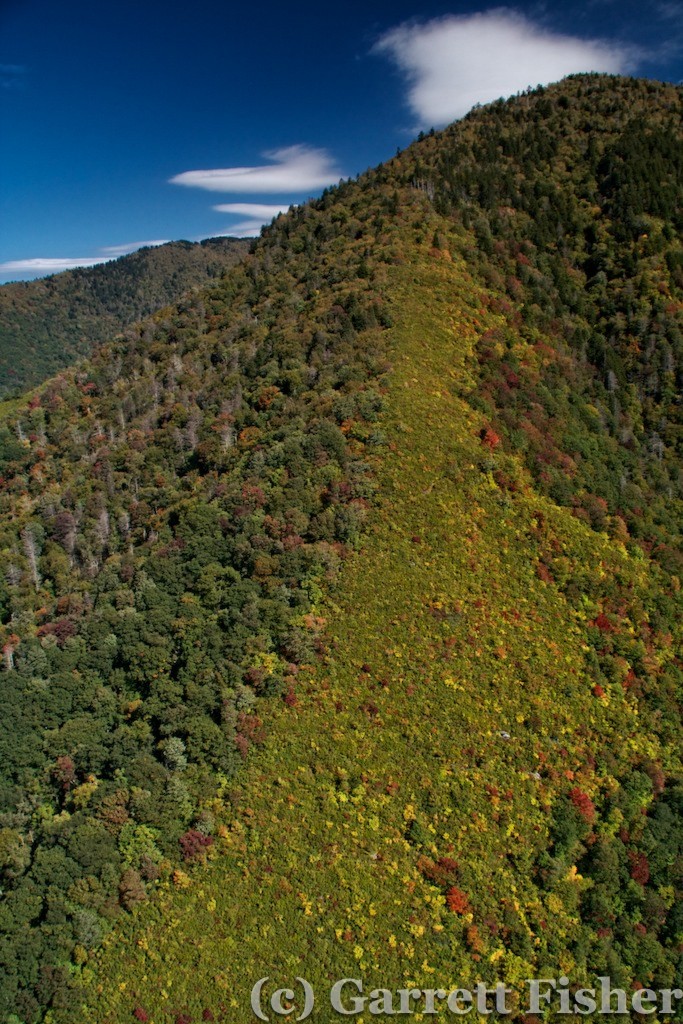 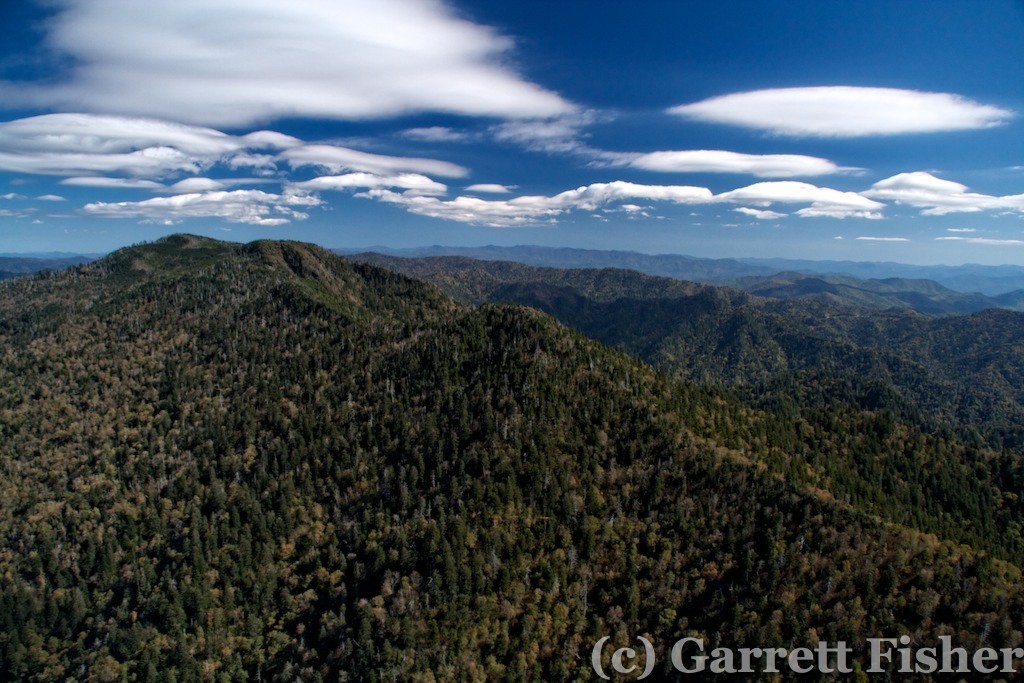 Cold Mountain on the north side of the Balsams was beautiful again, as was the Blue Ridge Parkway and Biltmore Estate. After those destinations, it was back up to the Black Mountain Range, which also featured lenticularis clouds. Despite the warning of “Severe turbulence possible in vicinity of Mt. Mitchell” on the sectional maps, it was bumpy however manageable. The Black Mountains had a mystical appearance due to clouds at the top, evening light, and differing colors due to autumn textures. 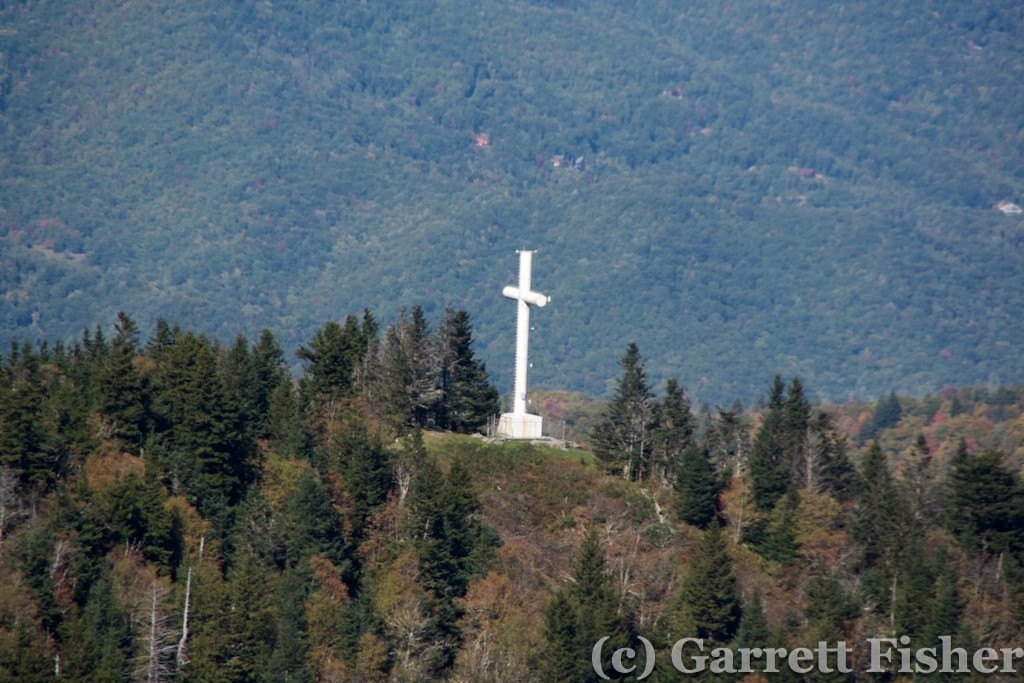 That Cross Again – You Can Look, But You Can’t Touch 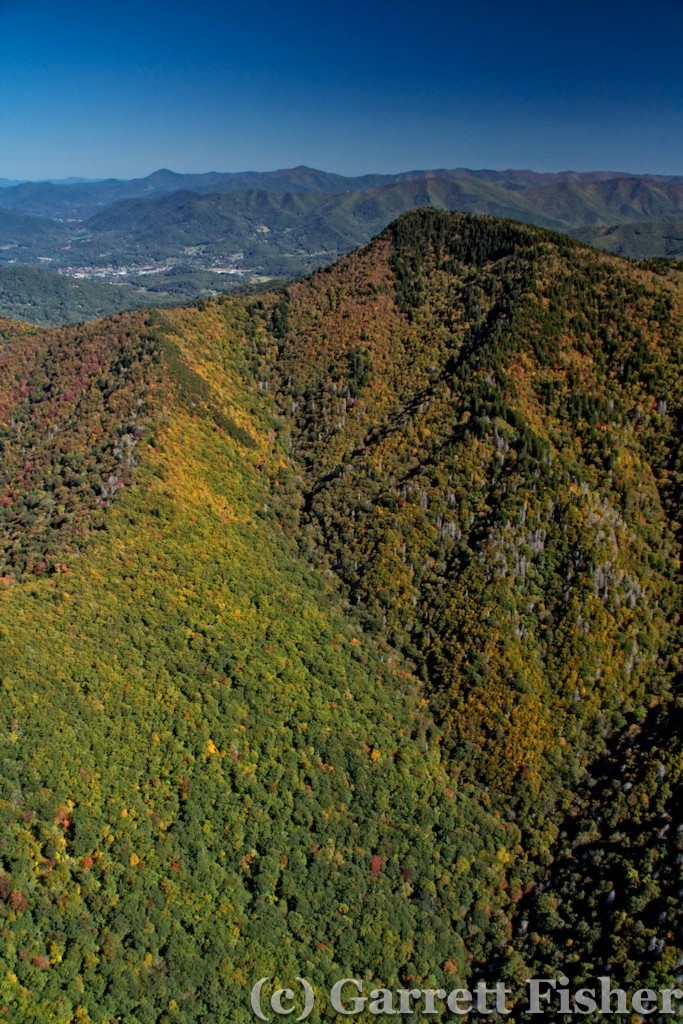 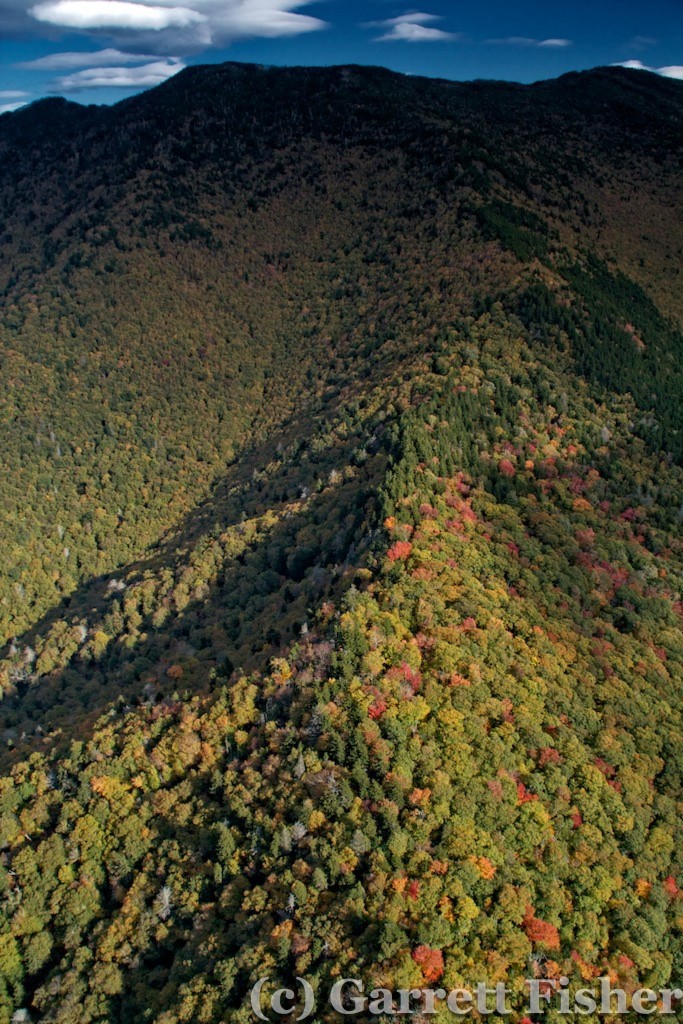 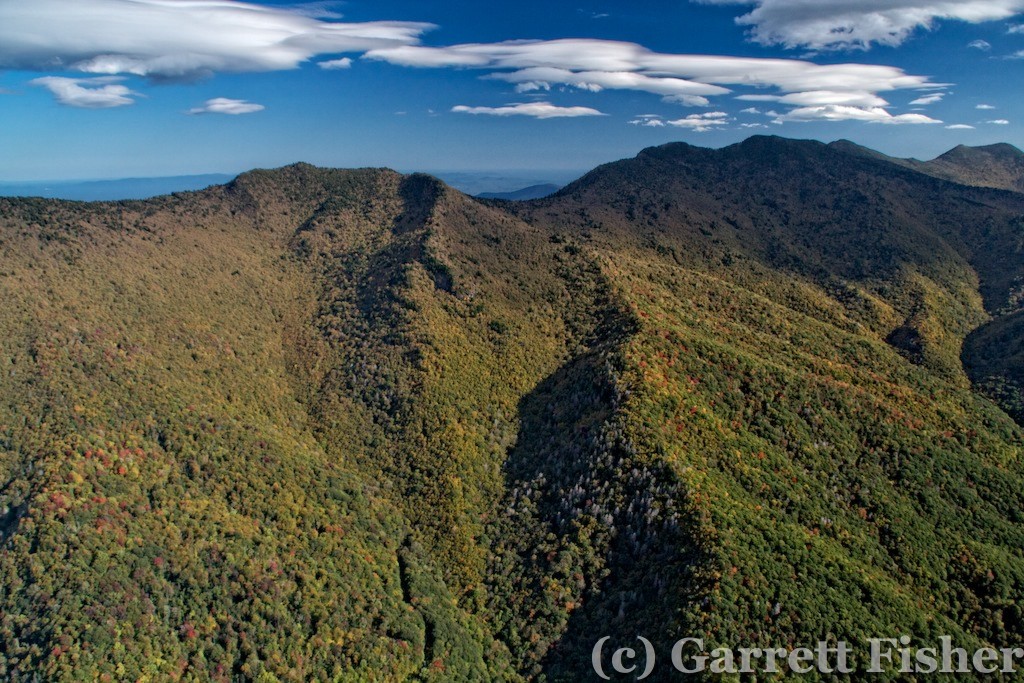 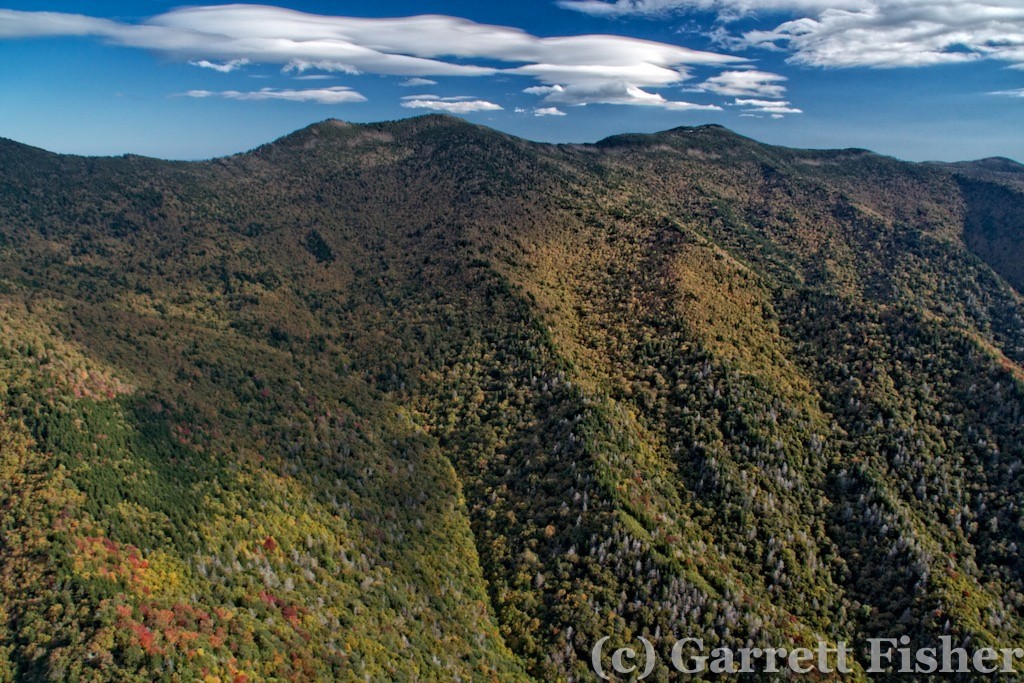 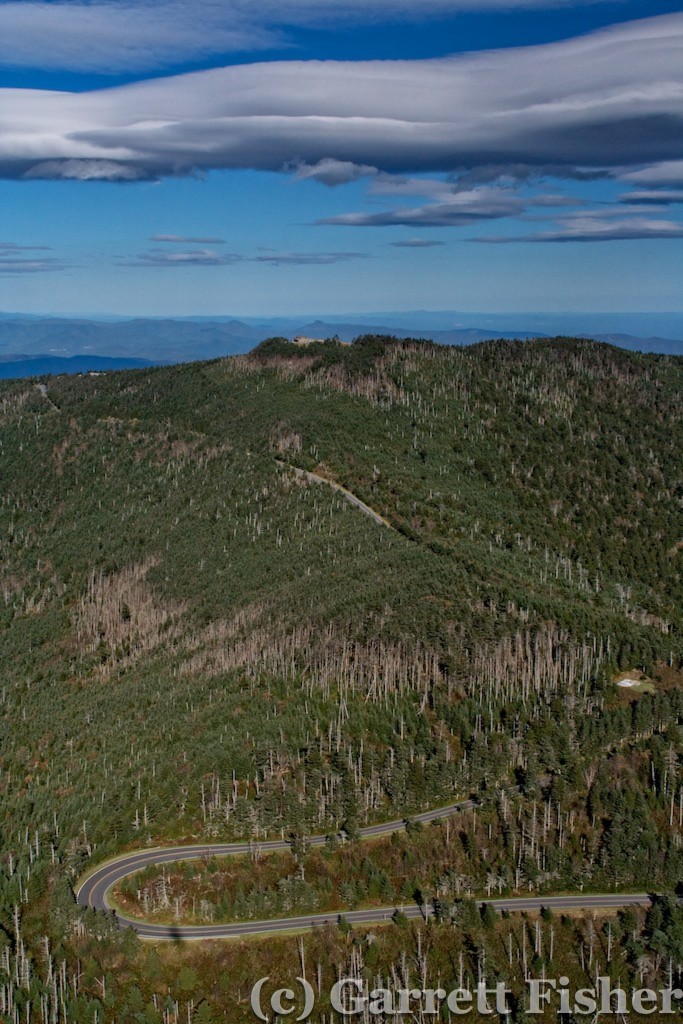 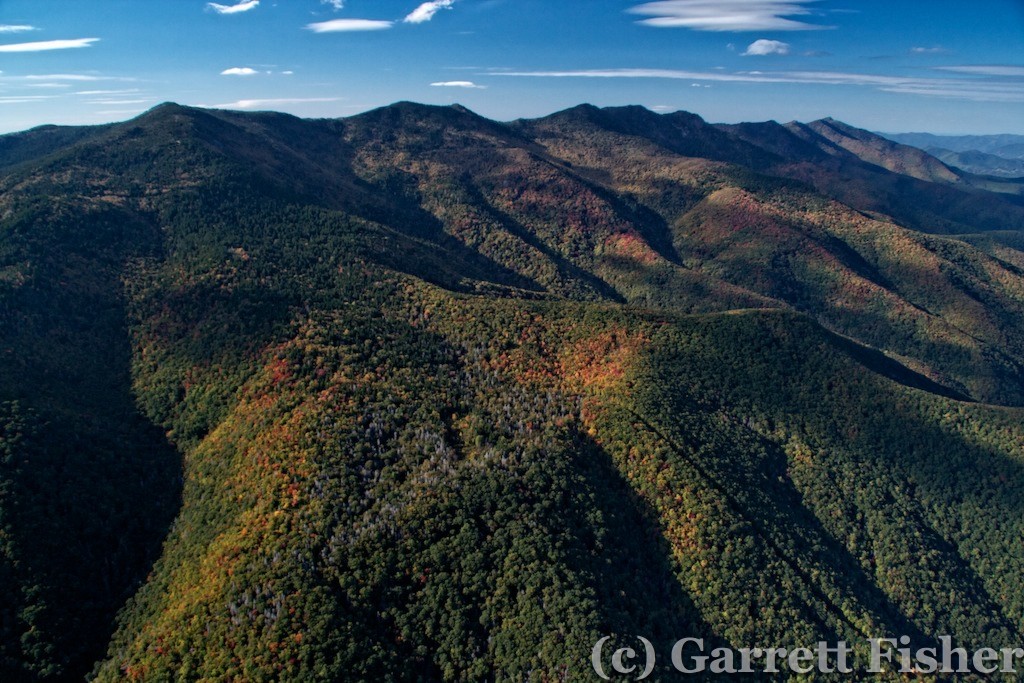 The route home featured a direct line over the South Mountains, the cleanest water in the state, and a mildly appealing group of terrain with peaks topping out at 3,000’. In the state park on the ground, it’s a neat experience to see the rhododendrons and clear water streams. In reflection, this was certainly a highly productive flight, lots of beautiful scenery and good photos. 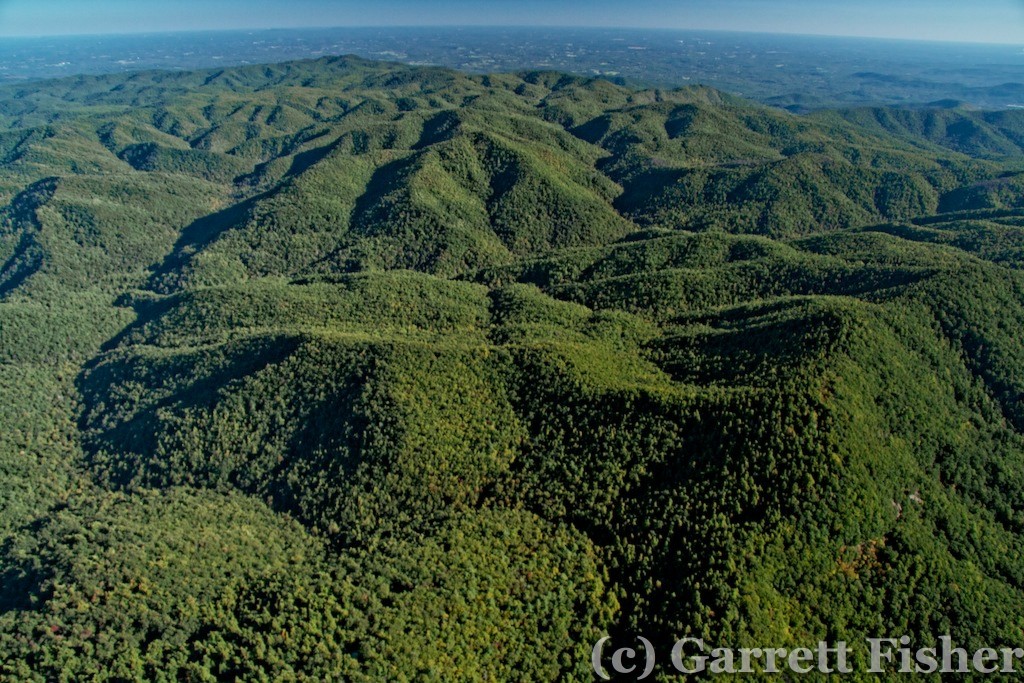