My fixation with visibility started with a youth in one of the cloudiest sections of the United States. Downstream of the Great Lakes, an already marginally foul area was made even more inhospitable, with infrequent sunshine for 8 months out of the year. It was in this windswept, muddy, cloudy, acid rain filled environment that I took my first flights in the PA-11.

A few years later, I visited some friends in South Carolina at the base of the Appalachians in late November. A cold front had just blown through, which usually results in lake induced clouds and mist up north. In South Carolina, it was the bluest blue sky that I had ever seen. I asked wistfully, “Is it always this way?” “Uhhh…yes,” was the reply, as though I was neurologically deficient in some way.

Eight years after that point, I found myself not too far away, living in the Piedmont of North Carolina with the PA-11. While I had enjoyed many days from the ground with illustriously clear air in the winter, with regular day trips to the Blue Ridge Mountains, now I had an airplane to savor this forbidden fruit. Flying became a game of trying to find days with good visibility, while scowling anytime some humidity blew in from the Gulf of Mexico and ruined it.

By 2013, it was off to the highest airport in North America, where I was able to do things, such as enjoy 60-70 mile visibility for the first time. In a dry area, physically higher than most of the global population, one can find a form of pure air that just begins to satisfy my unquenchable thirst for clarity.

After moving to Wyoming in 2015, I wrote the local National Weather Service office, inquiring why I saw the faintest dint of distant haze after a cold front, even sending a photograph where they noted how wonderful the air was. Wasn’t this Wyoming, where everything was perfect? Did not Yellowstone have a correlation to clear air? What is this? Only 50-mile visibility? Ugh.

Fast forward from spring of 2015 to autumn of 2015, where I had waged holy war flying 300+ hours, snarling anytime the air was less than perfect, choosing mostly to fly midday, to avoid the opacity brought on by evening air. As the move to Germany (where everything undoubtedly would be perfect) was approaching, I made a point to fly to the Great Salt Lake, while I still could. I confess that I was growing wistful as I realized that America would be a thing of the past for a while, so I wanted to get some sightseeing in. It was early November, illustriously clear, and, as I approached northern Salt Lake City, I grew disgusted at the slightest additional haze, associated with smog (in retrospect, it was nothing).

On the way back, I took the high road from peak to peak, where I was at 10,000 feet just east of Logan, Utah. From there, I could see Grand Teton, an astonishing 122 miles away. That was the first time something of the sort happened, and things finally felt right. This was how air was supposed to be.

Three weeks later, the airplane went into a shipping container, bound for Germany. A few months after that, I took my first flight in the Fatherland, coming to understand what haze truly was. What had I done to myself now?

As we all know, later in the year, I fled to Spain, where the rampage about the inversion below began. Why that mattered, I struggle to understand, as I was living on a throne above the haze, in the Pyrenees. That autumn, I could see 60-70 miles again, down the chain of the Pyrenees, though I still couldn’t help but notice remaining tinges of impurity. Surely, things should be as good as Colorado, even if there is no sound basis in physics for such an expectation.

Forays in the Alps brought struggles with summer haze, though that was mitigated by the fact that I could merely elevate myself above it, by finding the layer and swirling around peaks above. While the haze could be somewhat foul, at least I had little to complain about since I could escape it.

Winter in the Alps came and went, with nearly unlimited visibility, which I merely seemed to accept as a baseline standard.  Recently, I was glacier chasing in South Tyrol, Italy, where the idea of the Logan, Utah to Grand Teton axis materialized again. It started with what was a “Carolina Blue” or “Colorado Bluebird” day, with a sky so blue one could pour the color into a glass and drink it. On the horizon, I could see the Ötzaler Alps in Austria, then another clump of glaciers to the east, and finally….is that really the Höhe Tauern in Austria? Clicking on my iPad, I confirmed the heading lined up. Distance: 87 nm / 100 sm / 162 km. Surely, this must be something of a European record.

Roughly 20 minutes later, after some aerial work around a ridge with small glaciers, I could see some distant glaciers now in the other direction. “That’s the Dufourspitze,” (Switzerland’s highest peak) I said to myself. Clicking the iPad, 117nm / 135 sm / 218km. Heilige Scheisse! Better than Grand Teton! Squinting a little more, I could see some glaciers on the horizon, just to the left of the Dufourspitze. “Is that Gran Paradiso, south of Aosta?” Sure enough, it was. To make matters more insulting, I flew there no less than four times this summer trying to get a few glaciers on the south side of the peak, and each time it was clouded in. Now I could see that silly glacier 148 nm / 170 sm / 273 km away, an astonishing visibility record, a full two-hour flight away.

It occurred to me that these memorable days happen in autumn. It is something interesting, as winter in the Pyrenees and Alps usually features incredible visibility, seemingly unlimited. Why do I not ever exclaim about distant markers on the horizon? The answer is fairly basic: dark blue skies are set against glaciers, with no seasonal snowfall in autumn. That makes the highest glaciers specifically stand out, instead of being outshined by brilliant snow for 100 miles in between in winter, which makes it hard to clarify a single peak on the horizon.

Nonetheless, the flight marked a point where my standard for visibility has been met. Perhaps I should spend some time in the Andesian Atacama desert, where visibility is usually better, though it is a bit oxygen starved up there. 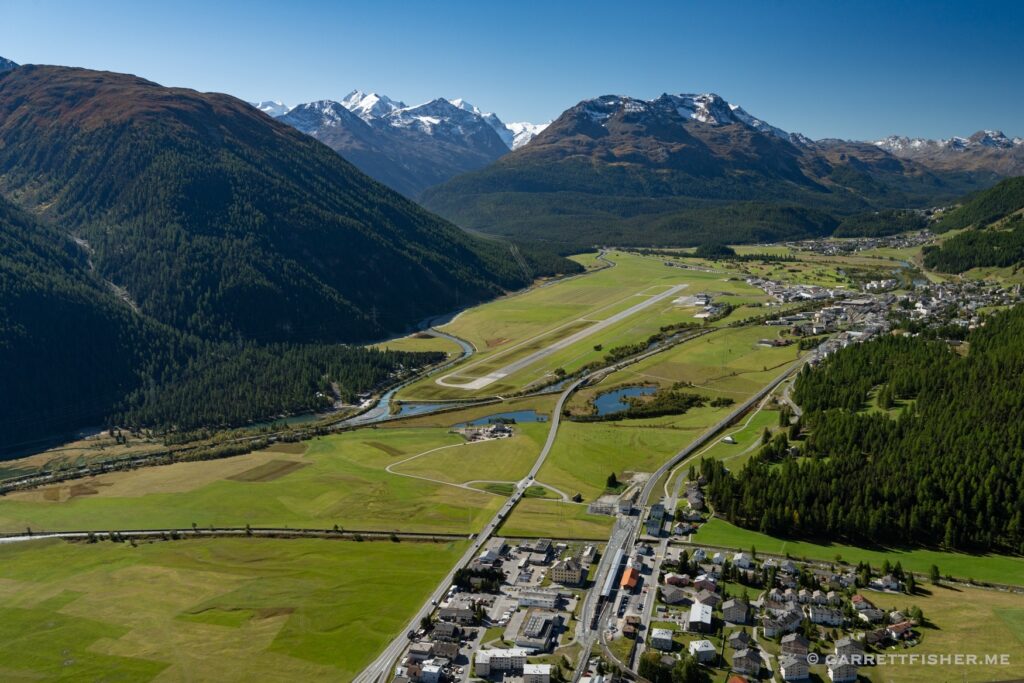 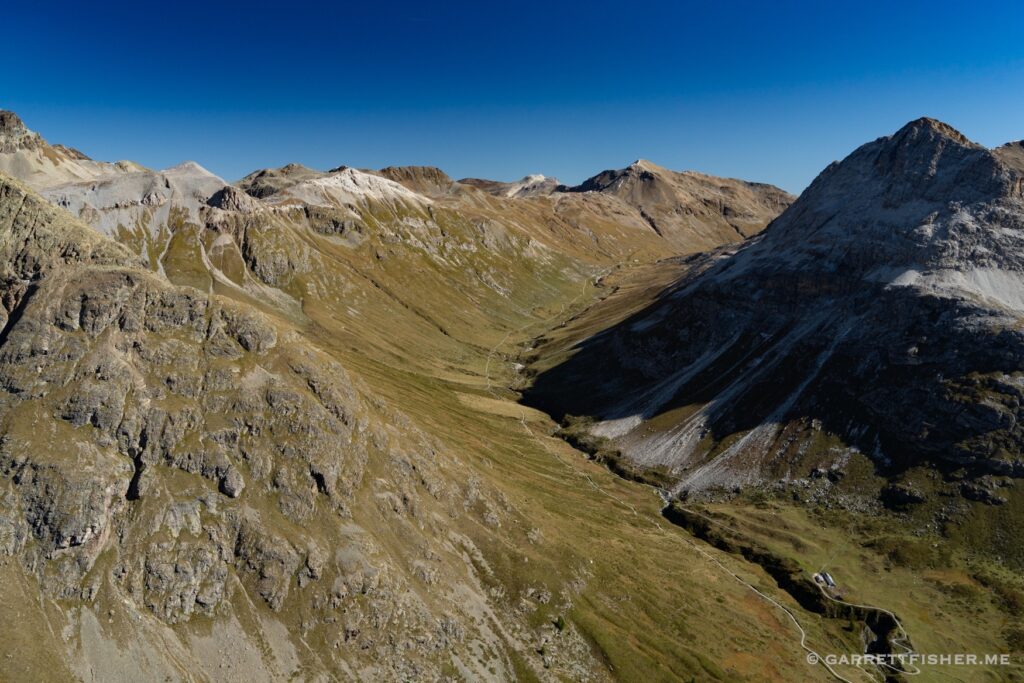 Livigno Pass, with Italy on the other side. Looks like a nice day visibility wise. 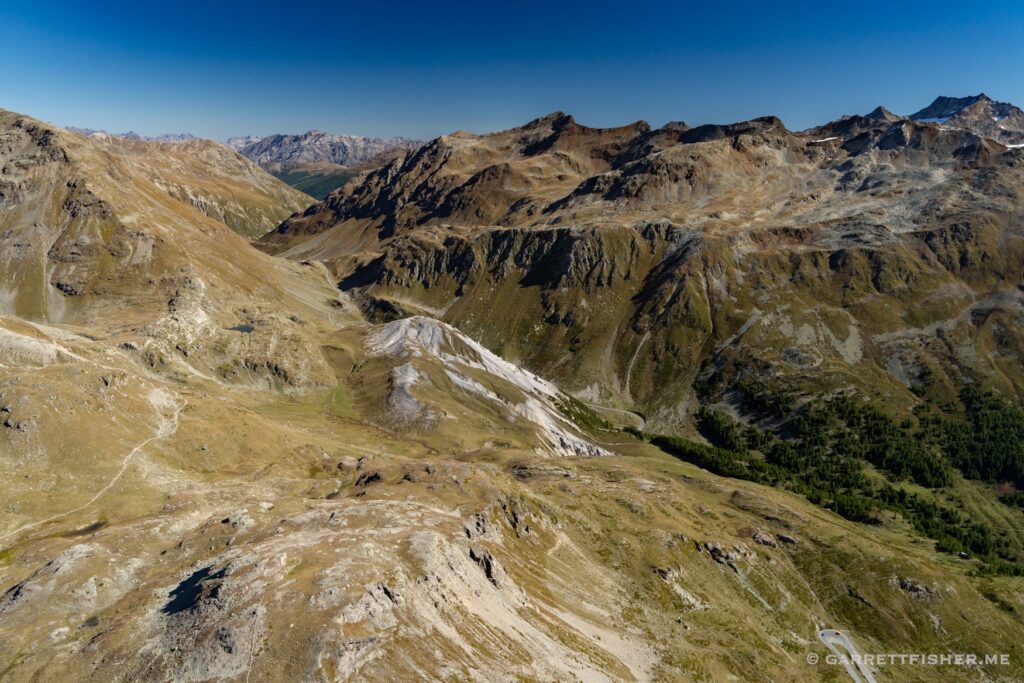 South Tyrol, Italy, with Höhe Tauern, Austria on the horizon. 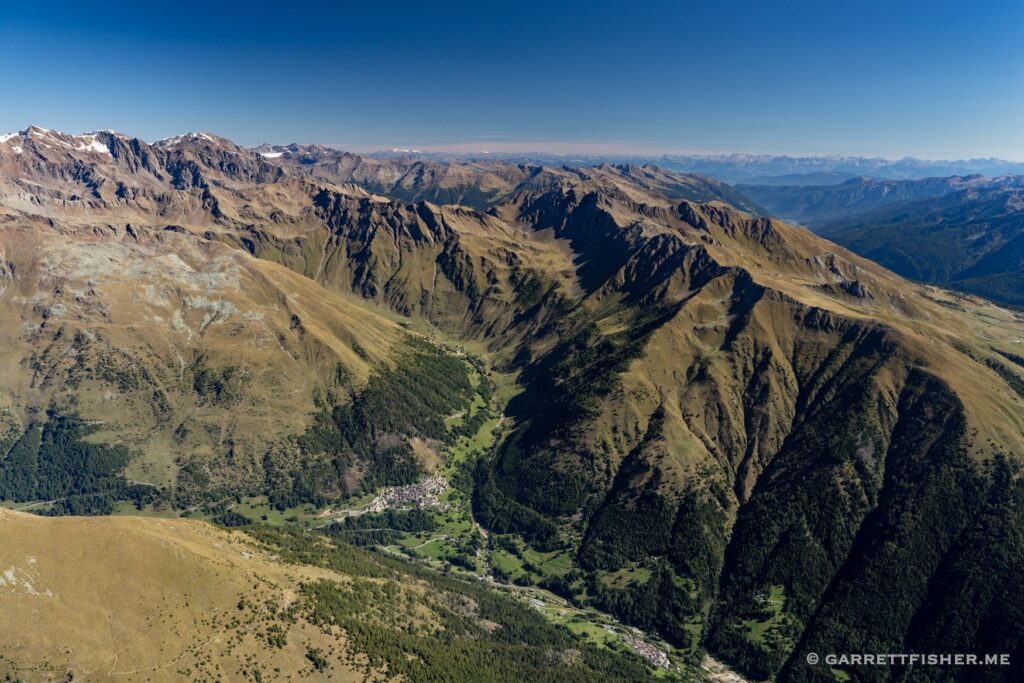 Brenta Dolomites, with the Höhe Tauern lurking on the distant horizon. 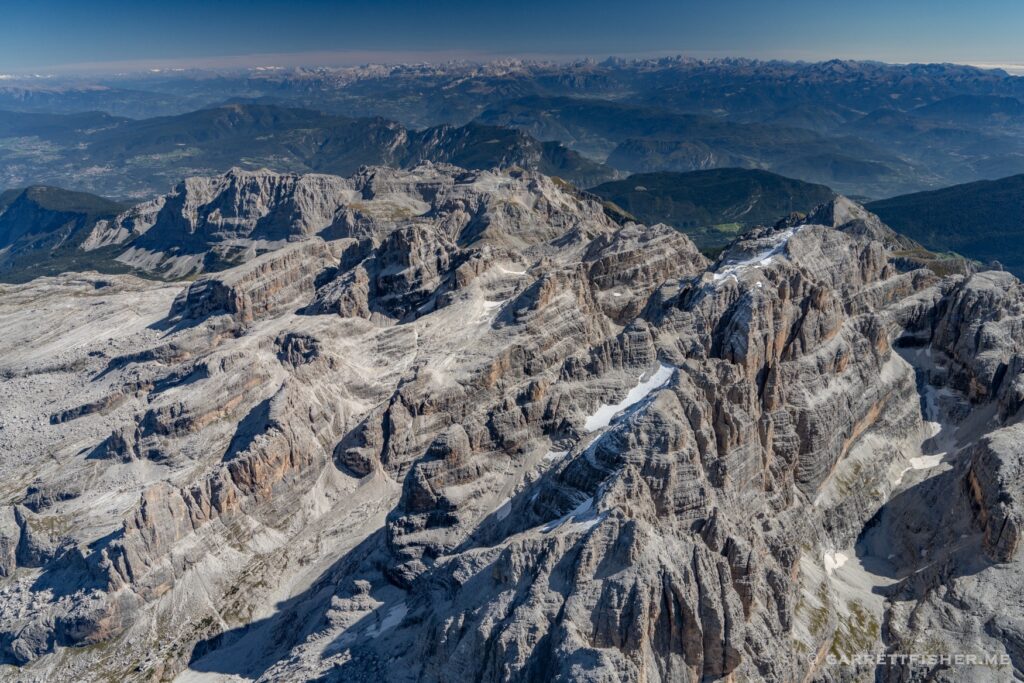 Looking toward Milan, where haze wishes to creep up. 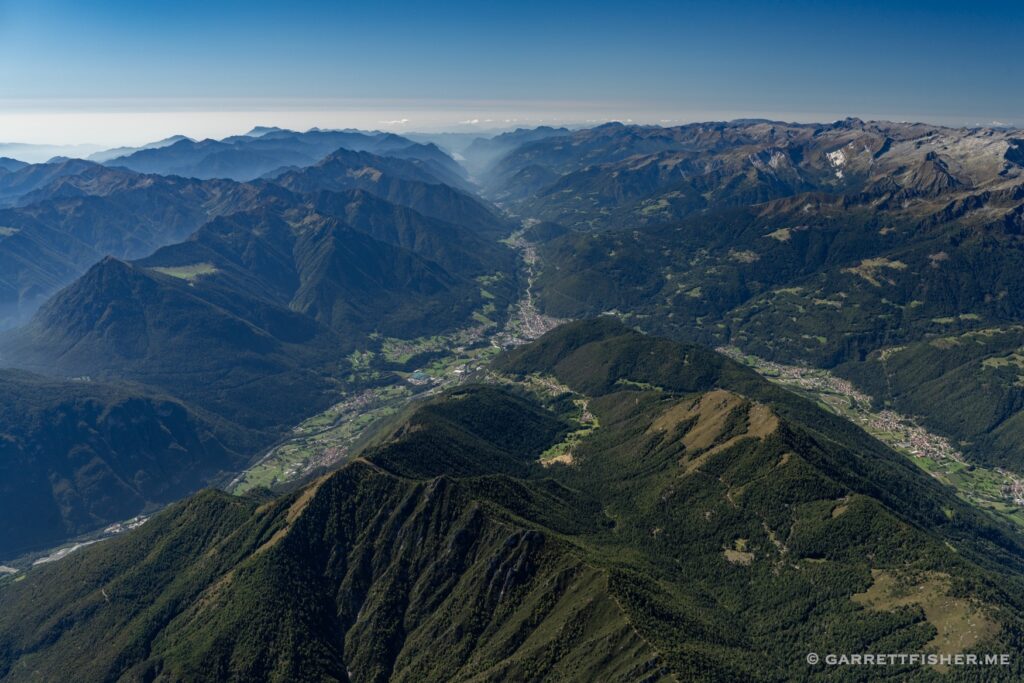 Beneath the Brenta Dolomites. 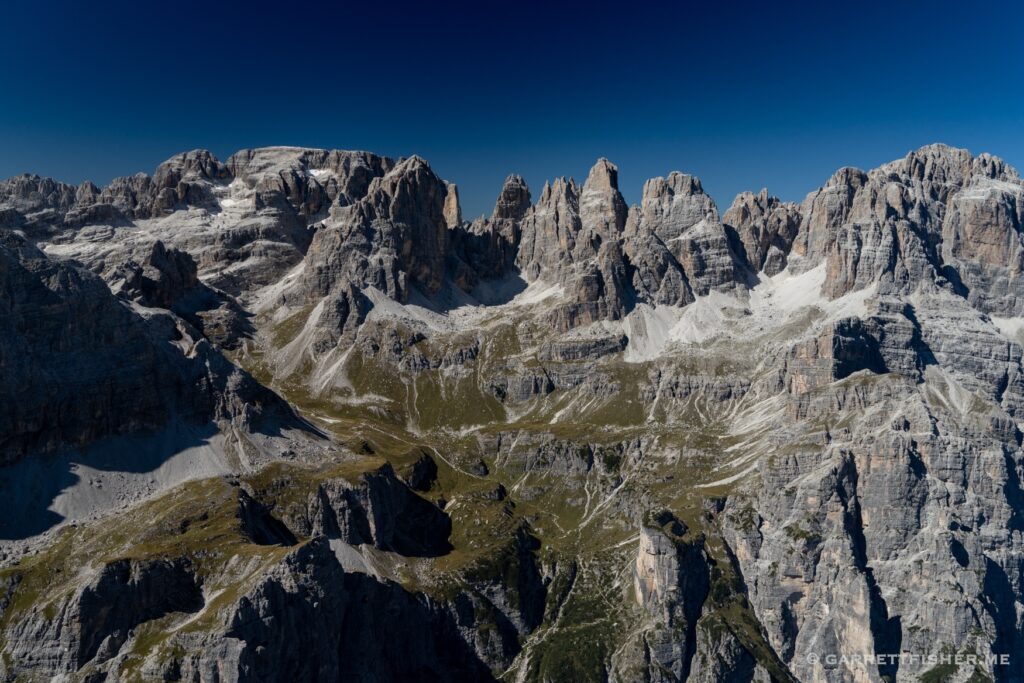 What goes up must come down for fuel. Descending toward Bolzano. Haze infiltrating on the left. 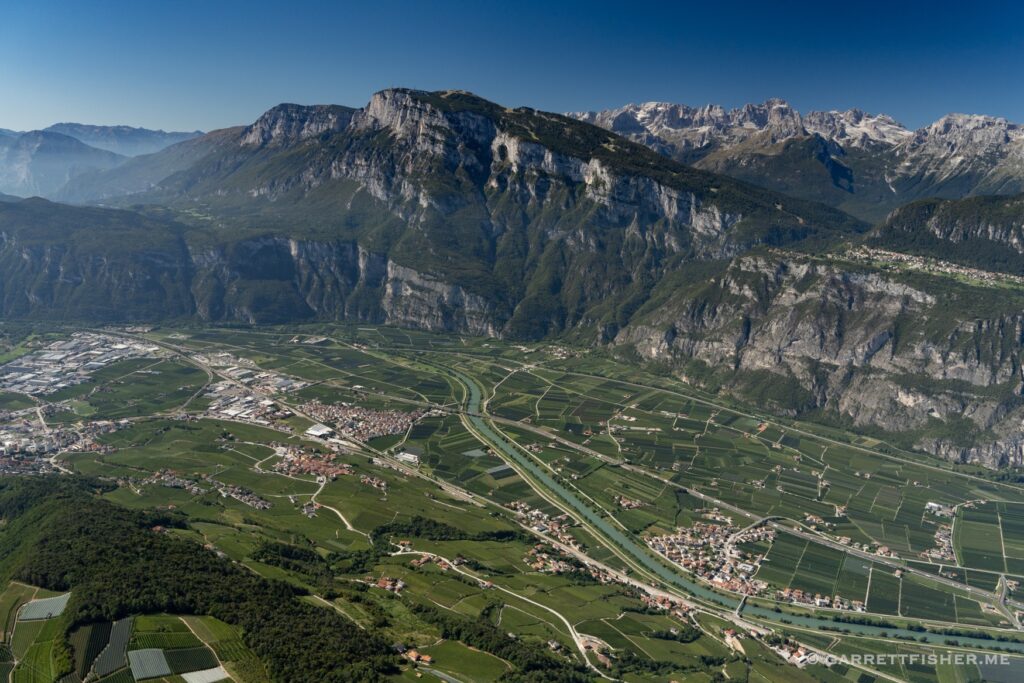 Fully fueled and slowly crawling my way into the Dolomites. 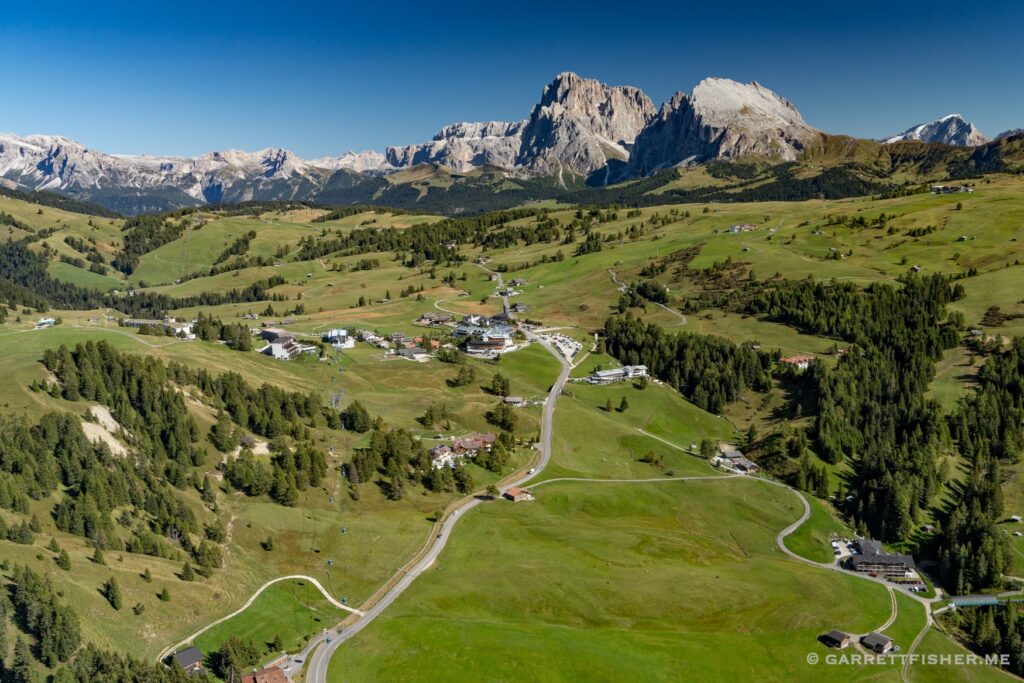 Pointy rock known as Langkofel in German and Sassolungo in Italian. This section of the world was Austria until 1918 where it was ceded to Italy as part of the Treaty of Versailles bit. 45% of the population speaks German, resulting in a delightful mix of chaos and draconian enforcement of rules. It could either be heaven or hell, depending on one’s perspective. 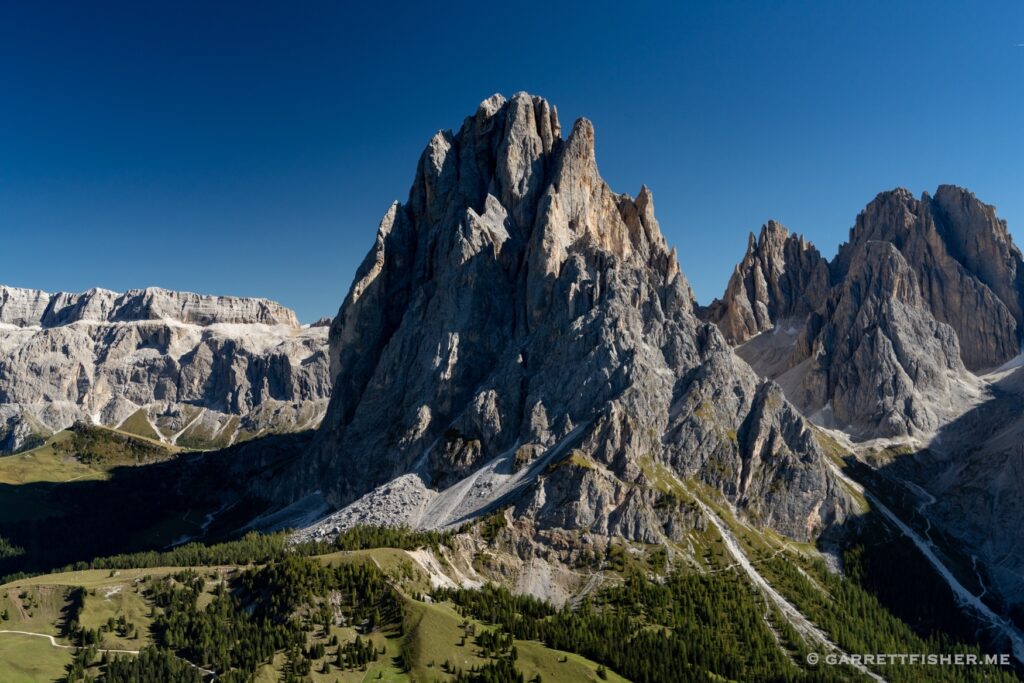 South of Dobbiaco. I thought about living there once, but the local aerodrome is mixed use with the military and has dumb hours. 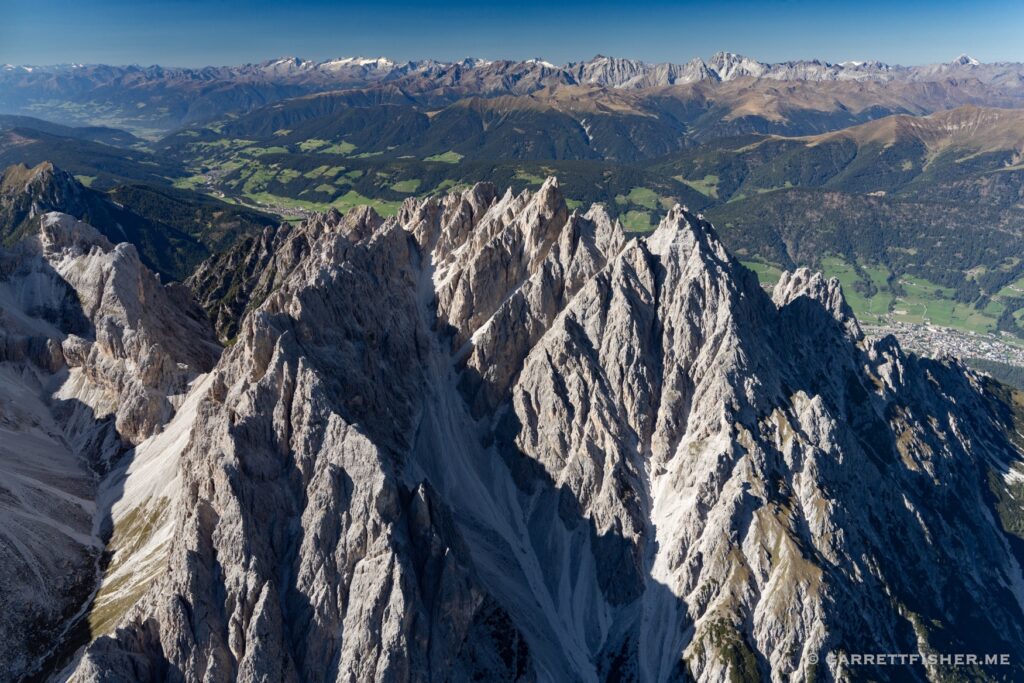 Cimon del Troppa. Slovenia is hiding under the clouds on the left part of the horizon. 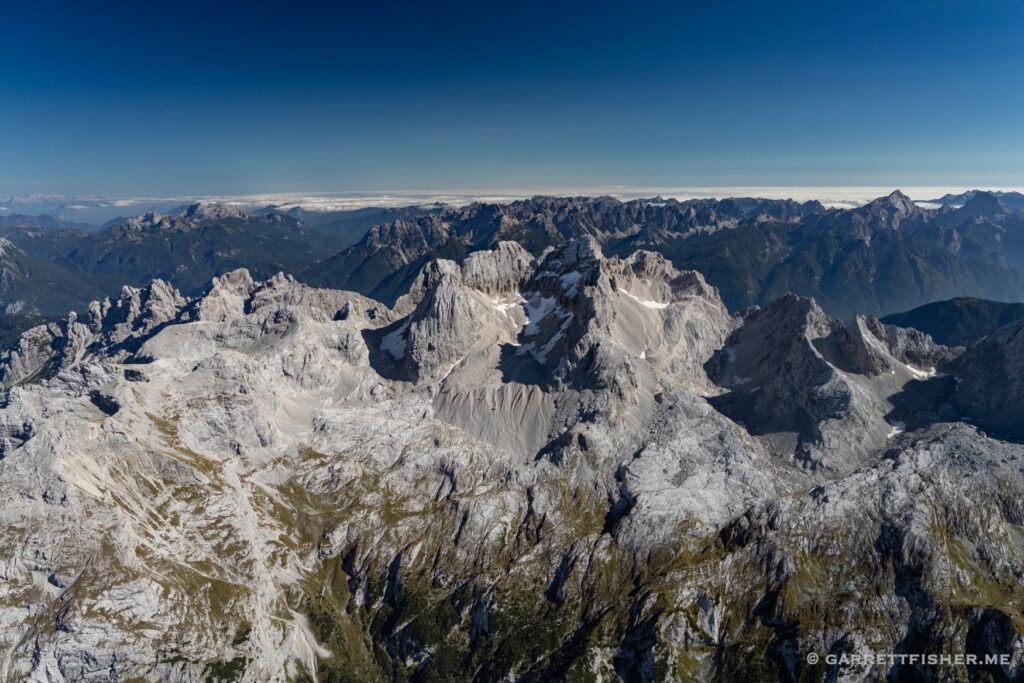 Punta Sorapiss. One has to love the name. Cortina d’Ampezzo behind me to the right. That is another place I would live, if the locals didn’t hate their airport and close it. 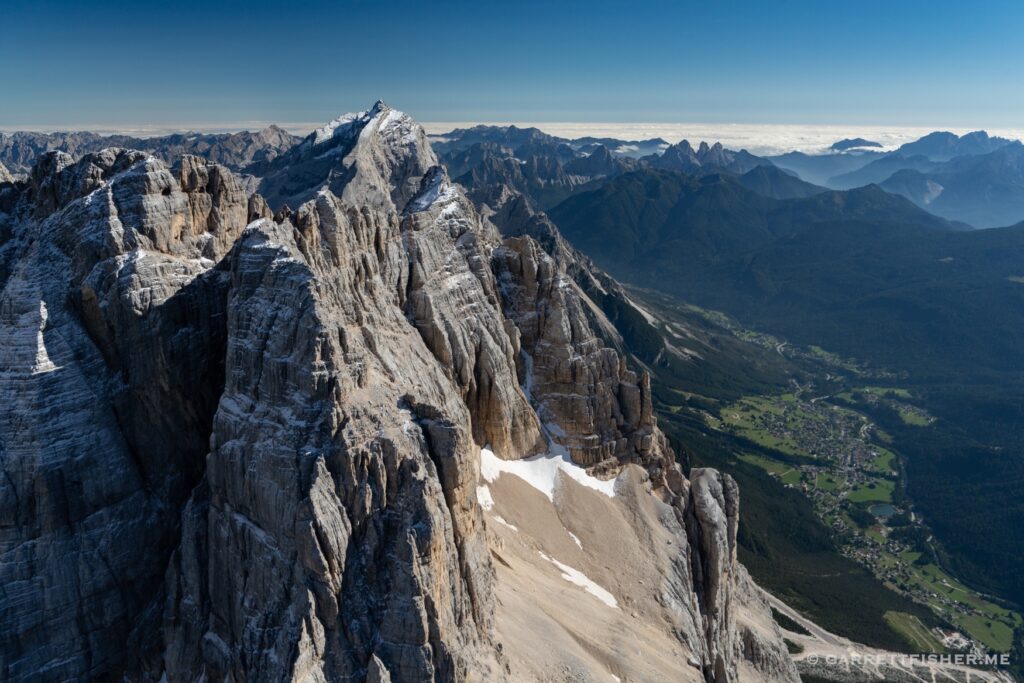 Marmolada Glacier with a swarm of paragliders. They were like gnats. 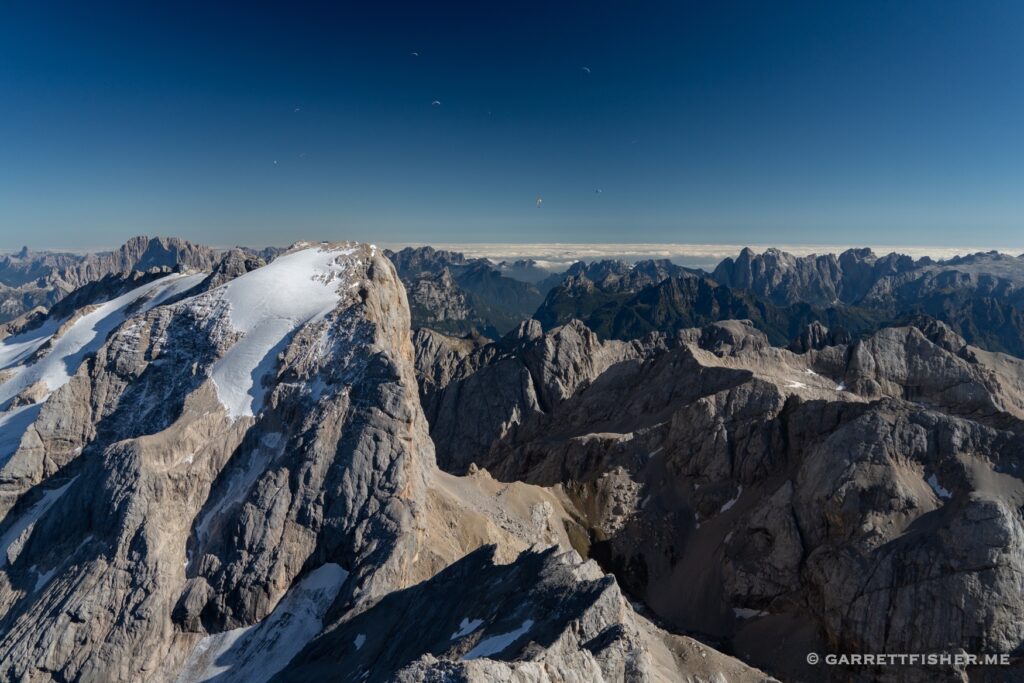 Descending for fuel. Haze is either seeping in, or evening light is accentuating it. Even on the best of days, it is a demon to fight with. 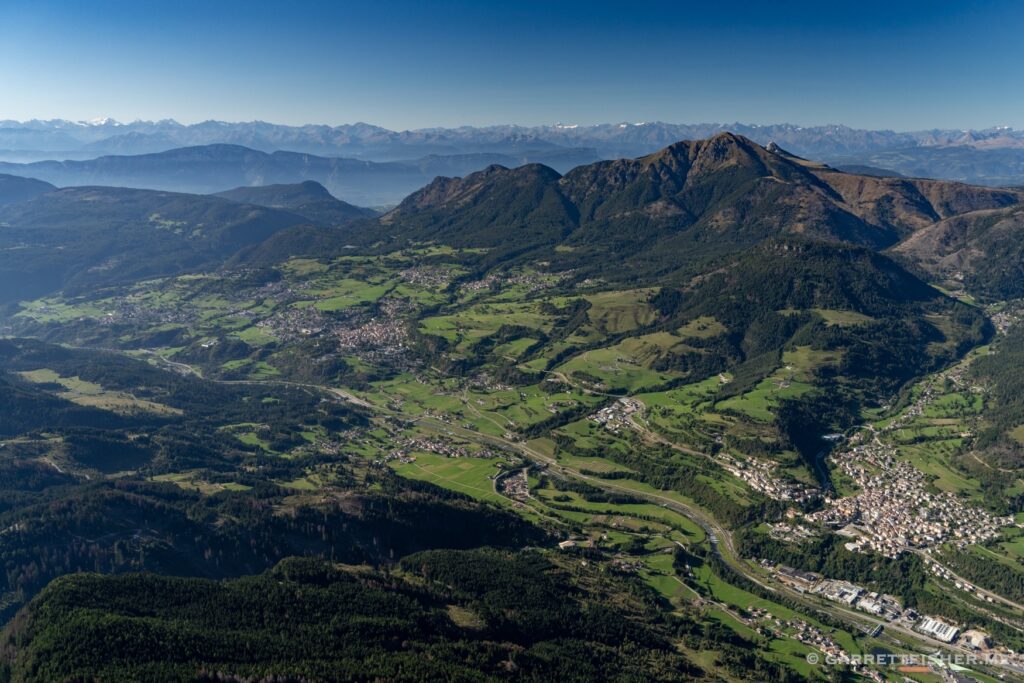 About to turn final to Trento for fuel, down below the skank layer. This image is rather post processed and, well, haze is haze. The airport was a very esoteric place, with a business helicopter doing aerobatics very close to the ground. 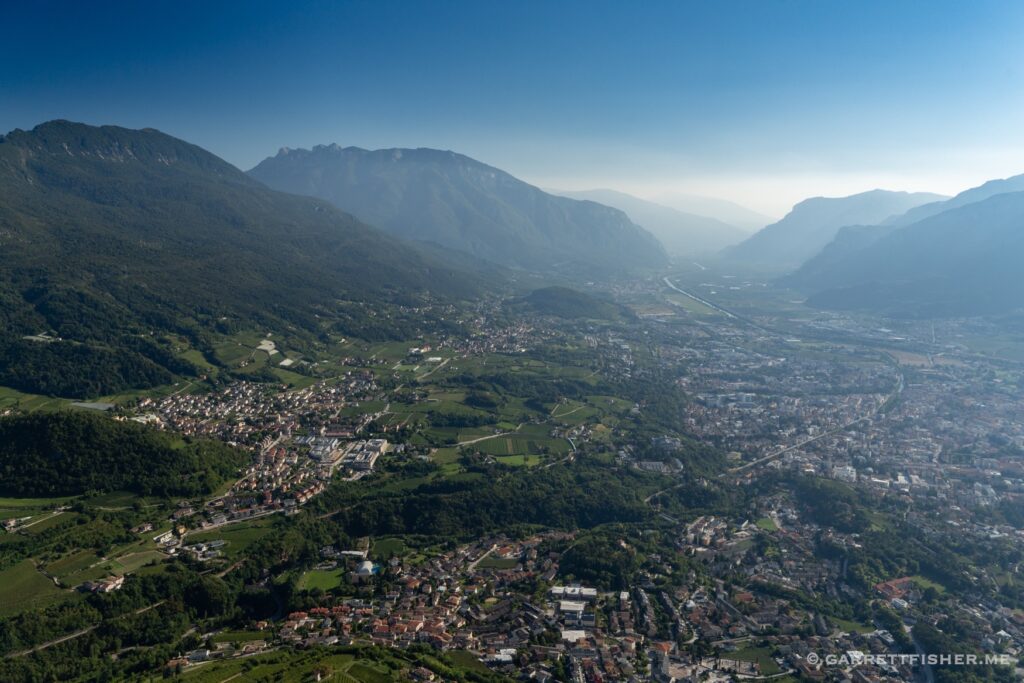 On the way back, above the haze layer, fighting the glare. This image is post processed to death. 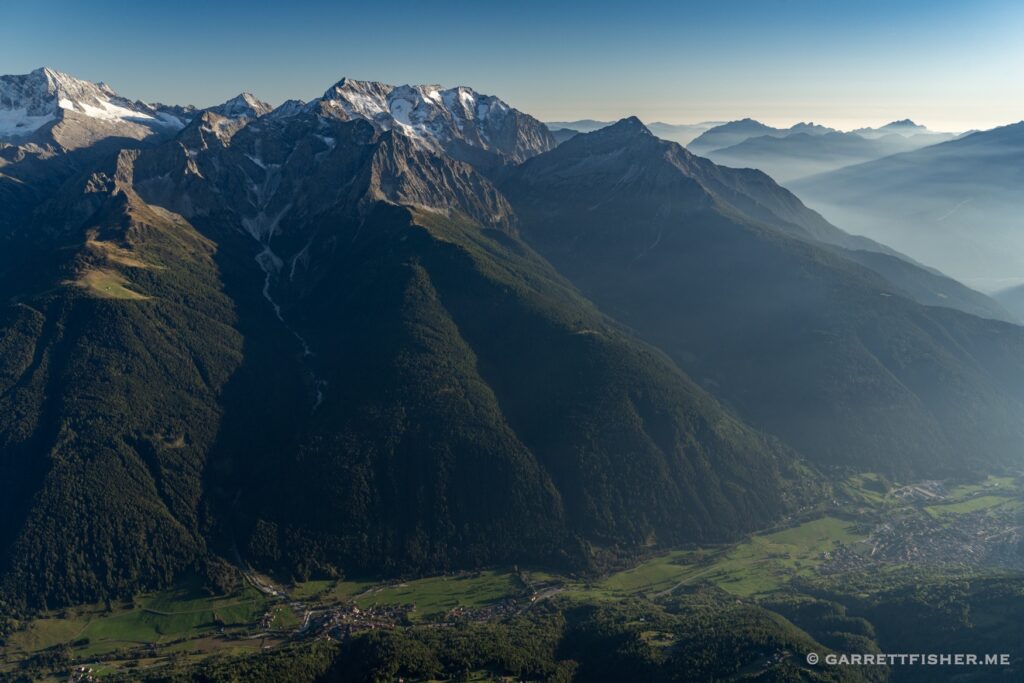 One way to solve haze is to reduce the distance between me and the subject. It is coincident to the underlying style differentials between America and Europe. The US is very spatially grand, where as Europe is tighter in many respects. 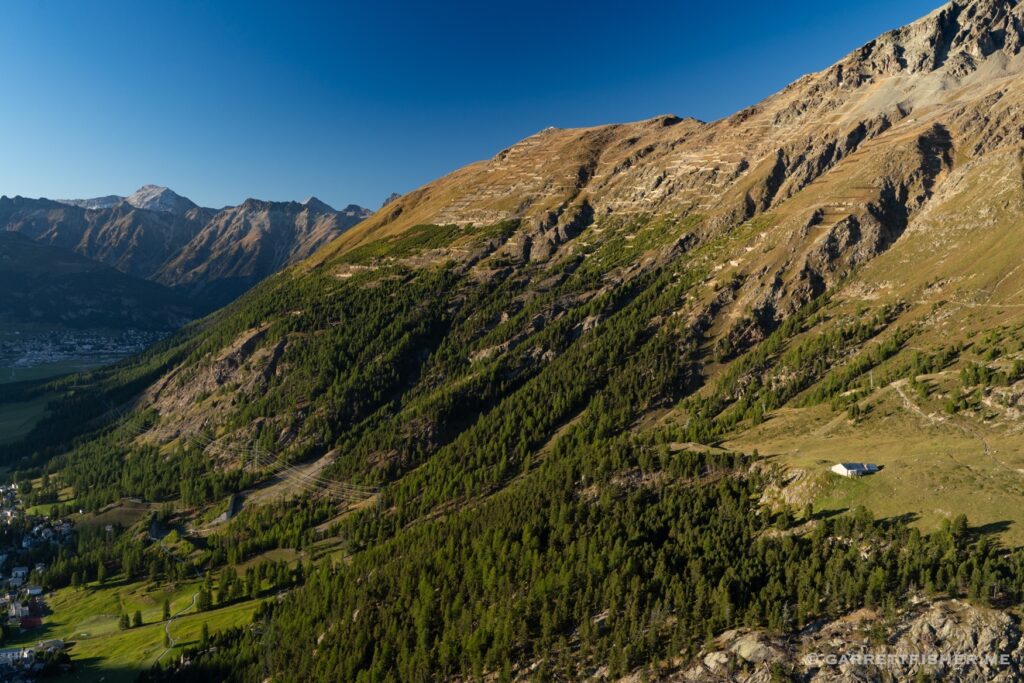 On the way back…. I flew into a dust storm that blew in from the Sahara. Talk about haze. Mild slap in the face. 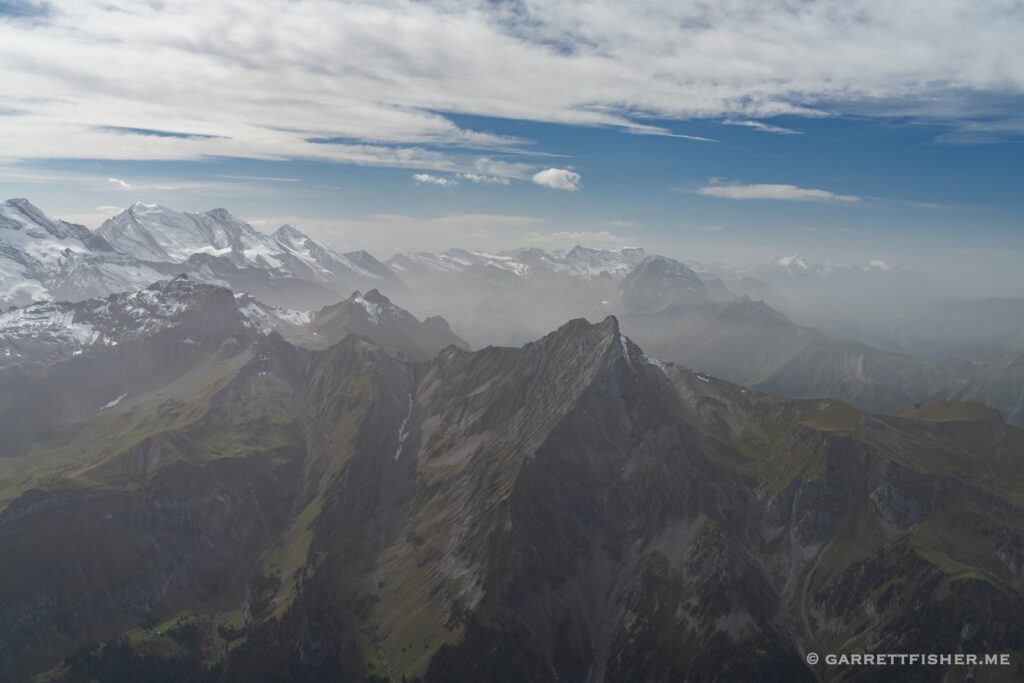