I received an email from an airline captain from America who frequents Europe. His advice was to be on the lookout for rapeseed (canola) fields in full bloom in Germany in the beginning of May. Noticing that these fields were increasing in color on a few prior flights coupled with ground observations, I took off for the eastern Odenwald to photograph them.

Satellite imagery indicated that some of the best fields would be found near Berlin, to the west of Magdeburg. A sliver of Google Earth imagery showed fields in bloom, though it was a few square miles at best of imagery taken on that particular date. I had reason to suspect that, just because I could see a few fields on Google Earth, it didn’t necessarily mean that they were limited to that area.

One major monkey wrench was the expiration of the 30-day free trial on my iPad flight software. A full year subscription, to the whole of Europe, costs something to the tune of $350 (!!!!!), and I was hoping to push it to the next credit card billing cycle, because I am American and like to consume things before settling the bill. Therefore, I had a legally-adequate VFR chart and a trial of another piece of software. The problem with that trial was that it would kindly stop allowing GPS tracking for a period of time at various intervals to encourage actually, you know, purchasing the app.

Thus, I departed Egelsbach following the exacting pattern departure routing by memory and headed east for the Main River. Canola fields were in explosive bloom, and spring was finally getting started in the hills. Weaseling down the Main, I found some yellow fields, though I just wasn’t “feeling it” and decided to head southeast for the more open farmlands to the west of Wurzburg. That turned out to be a good choice.

It was as though I was in some sort of storybook land, a place where explosively yellow fields were everywhere. I even did something I haven’t really ever done with farm field photography: I climbed another thousand feet up to get a more panoramic view of yellow fields off into the horizon. It was really something else.

After a few glances on the map to confirm airports to avoid, I pointed the airplane in the general direction of home, and to my surprise, flew the entire way home without having to look at the map, or the iPad for that matter. Testing my skills, it was easy to triangulate position based on a giant smokestack on the horizon, a radio tower I had passed, and a peak in the Odenwald hills, along the Bergstrasse. Once in the vicinity of Darmstadt, the routings back home were familiar activities.

It is nice to prove that dead reckoning can be done with some ease without having lived somewhere for years. In effect, it’s a portable skill. Get enough bearings of the locale, and perspective on where I am isn’t that hard to figure out. It helps that I fly primarily on extremely nice weather days. 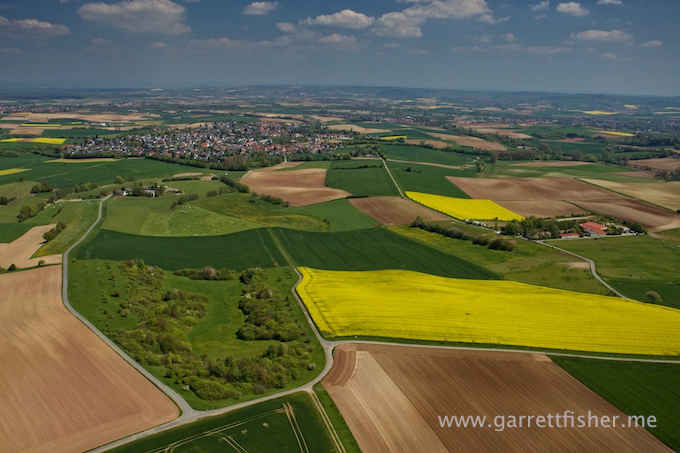 Someone out taking a drive. It is in these moments that I snicker that I own an airplane. 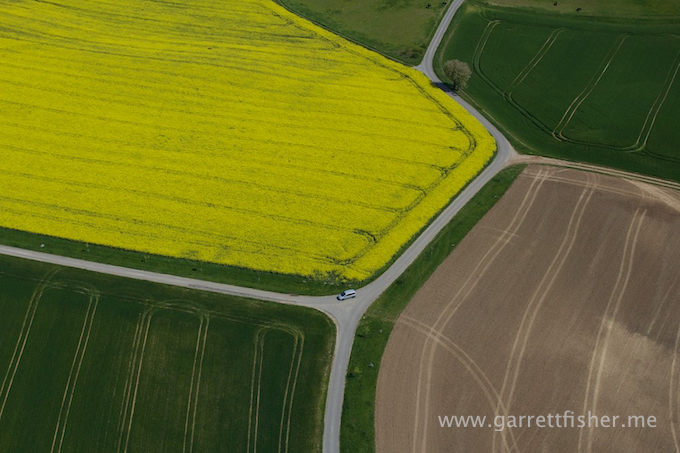 Poor village to live in with a canola allergy. 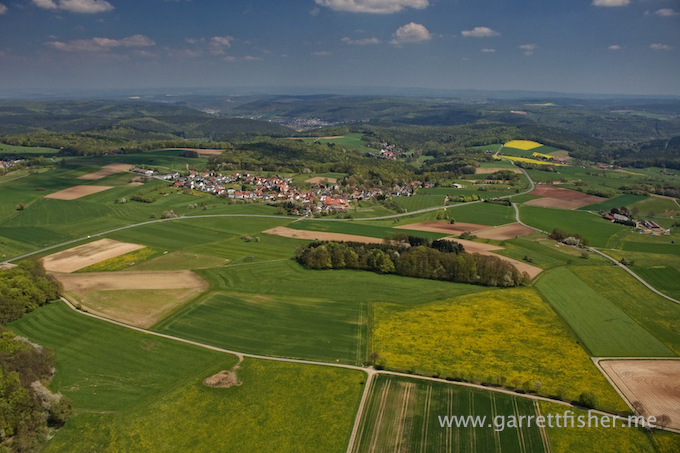 Attractive contrast of the Main River, very hard to photograph to my liking. For all of you anglophiles out there, “Main” is pronounced “mine.” 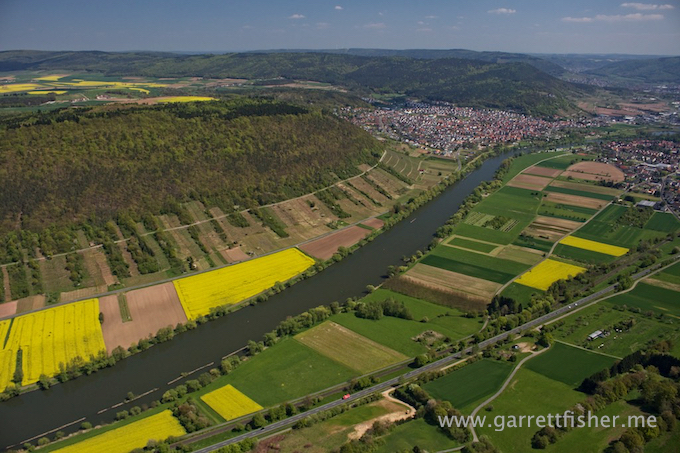 Main River with castle in the hill. 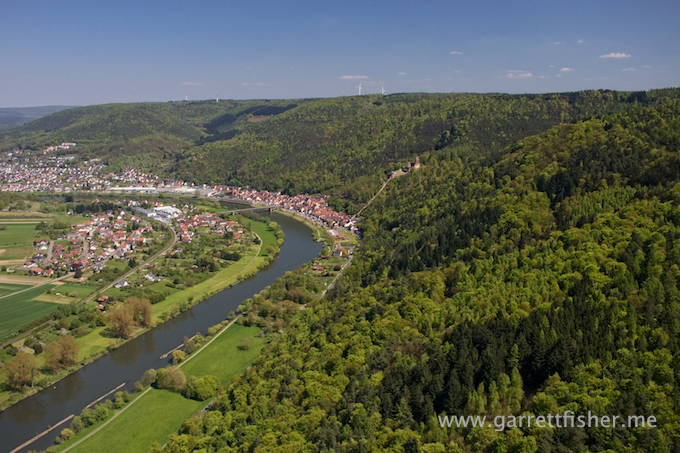 The whole river thing isn’t doing it for me. 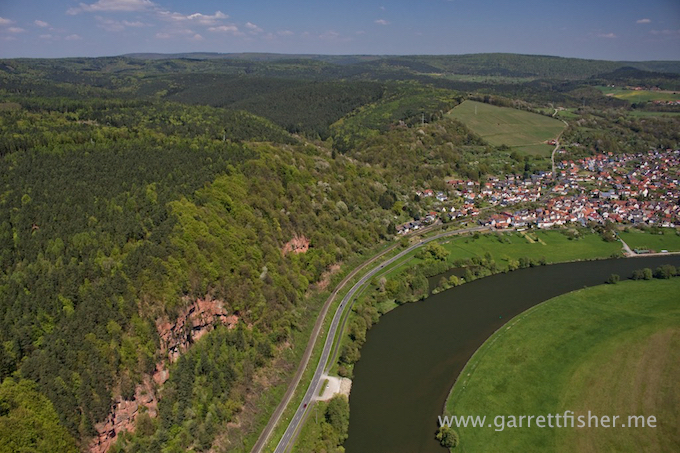 And so the fields it is. 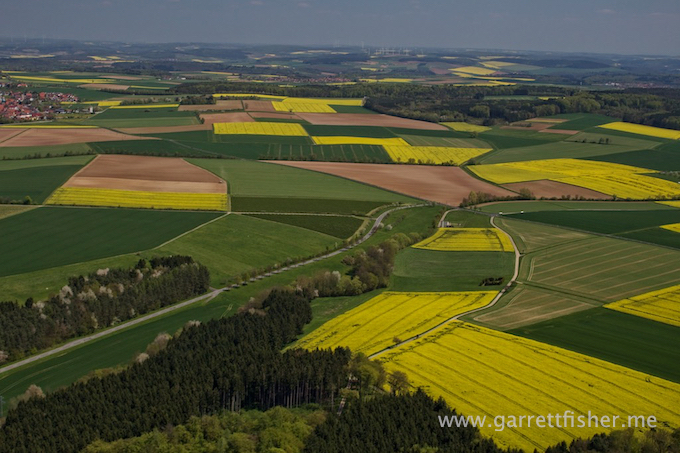 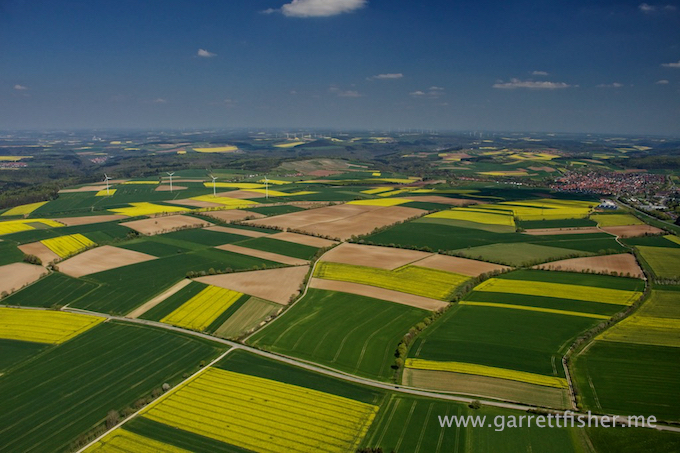 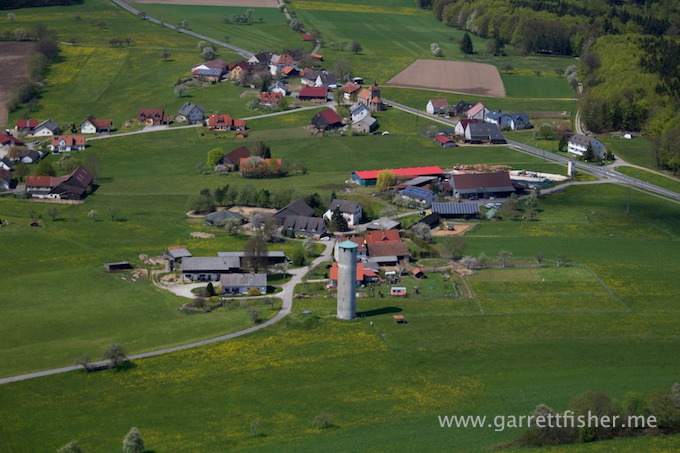 Odenwald again. While it looks like a blissful little storybook place, Germans will yell at you in a rage if you try to take a country drive on one of the forbidden roads. Yep, we tried it and made a kind, laid back hill dweller start foaming at the mouth in a frothing, near murderous rampage.

This juxtaposition looks better from the air than via the camera, yet I take hundreds of these photos over and over thinking they will look different. 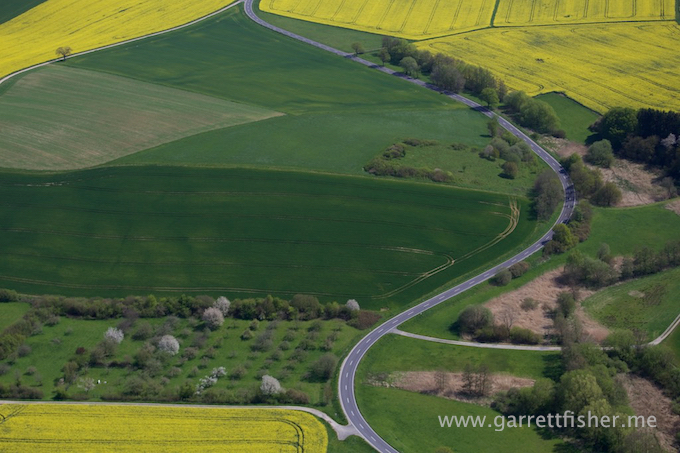