This flight was one of testing a few things out: how to fly around here on a north wind day without dying, and playing with my new lens. Important thing first: I was shooting before with an 18-55mm and 75-300mm lens, depending on the need. In the USA, I would revert to the big daddy zoom lens for Yellowstone hot springs and farm fields, and the wide-angle lens for everything else. Here in Europe, there are so many farm fields that are uninterrupted in their raw beauty that I find the 300mm to be cumbersome. That, and swapping lenses in the air is a real pain. I stuff the unused one in my jacket, close the zipper, and after binge photography and landing, step out the plane and hear a smacking sound, the glorious combination of Japanese lenses landing on the ground. It happens 50% of the time I lens swap. I needed something with a bit more zoom, though still wide angle.

Today wasn’t so pretty weather wise, which means it was a good day for a test photo shoot. And then there was the matter of staying alive.

As I have previously alluded, Spaniards have a flexible version of reality. Generally, when you’re considering purchasing something, optimism runs supreme, and after cash has been tendered, any advisories about safety are passively and delicately mentioned as a mere remote possibility. What was said: North wind days are not “ideal” in this neck of the woods. What I heard: “Only wimps find it a problem.” What the Spaniard meant: “Don’t go up on days like that or you’ll die. Please be sure to pay your monthly hangar rent bill in the office before going flying.”

Then there is the ongoing matter of the Spanish view of reality, sales notwithstanding. I asked one of the guys at the airport if a prior day was a good day for mountain winds. “Oh, its no problem!” So I head up, climbing toward Puigcerda, when I fly into some horrifying severe turbulence/mountain waves/rotors/God-knows-what, camera equipment flying around the cockpit and getting the snot beaten out of me. After landing, a separate, now more trustworthy airport guy advised that said day was extremely dangerous for flying. “Yeah, I just figured that out.” At least the dead moth that I couldn’t even vacuum out near the windshield seam dislodged. Look at the bright side….

So, today was another north wind day. It doesn’t mean flying is impossible, it just means that I can’t fly on the north side of the valley. I was given the detailed low down on which parts of the valley are kosher for north wind days, and I decided, with a dose of trepidation, to try it out. Other than some interesting and unsettling wind activity, it turned out ok. And I like my new lens.

Looking toward the summit of Puigmal. I am coming to understand that thick afternoon clouds are quite normal around here. 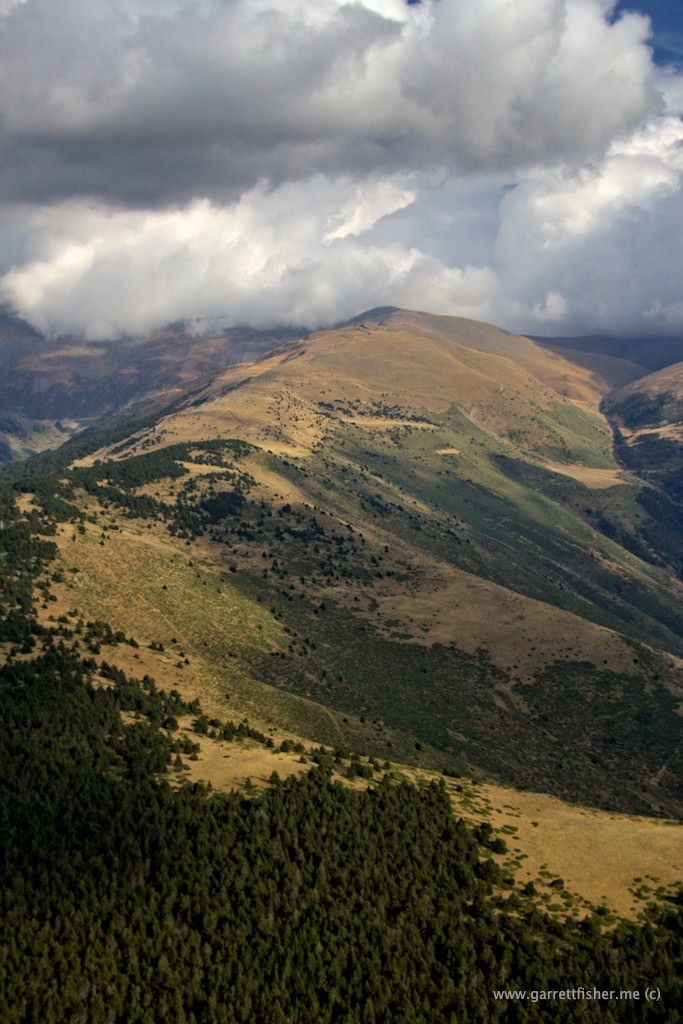 Some ski resort in France. 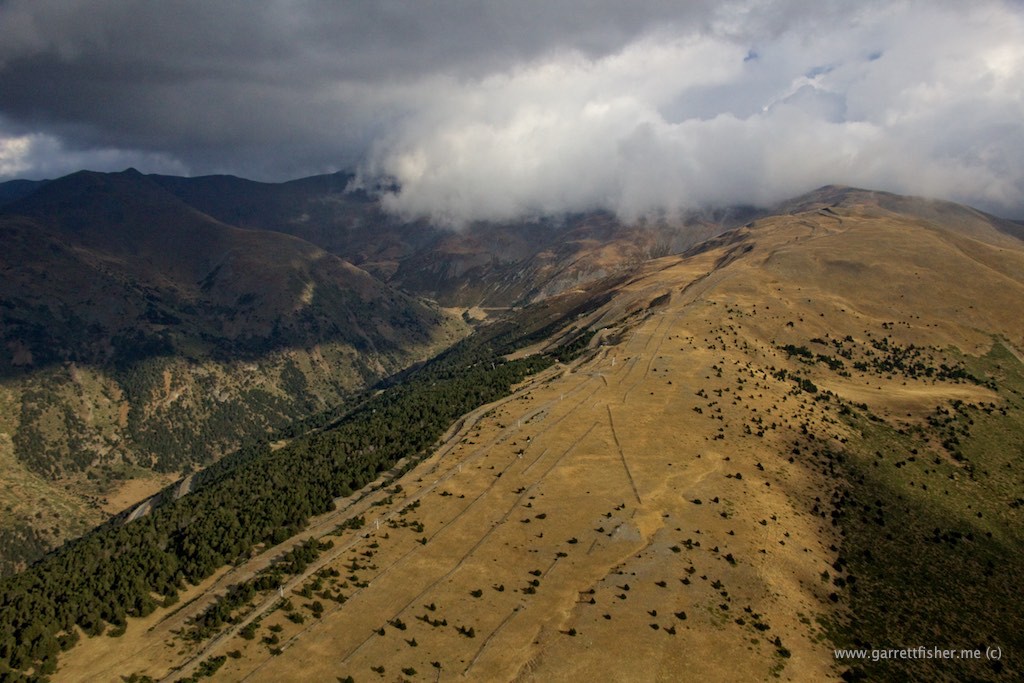 Despite late-season dull color above the timberline, there is some texture to work with. 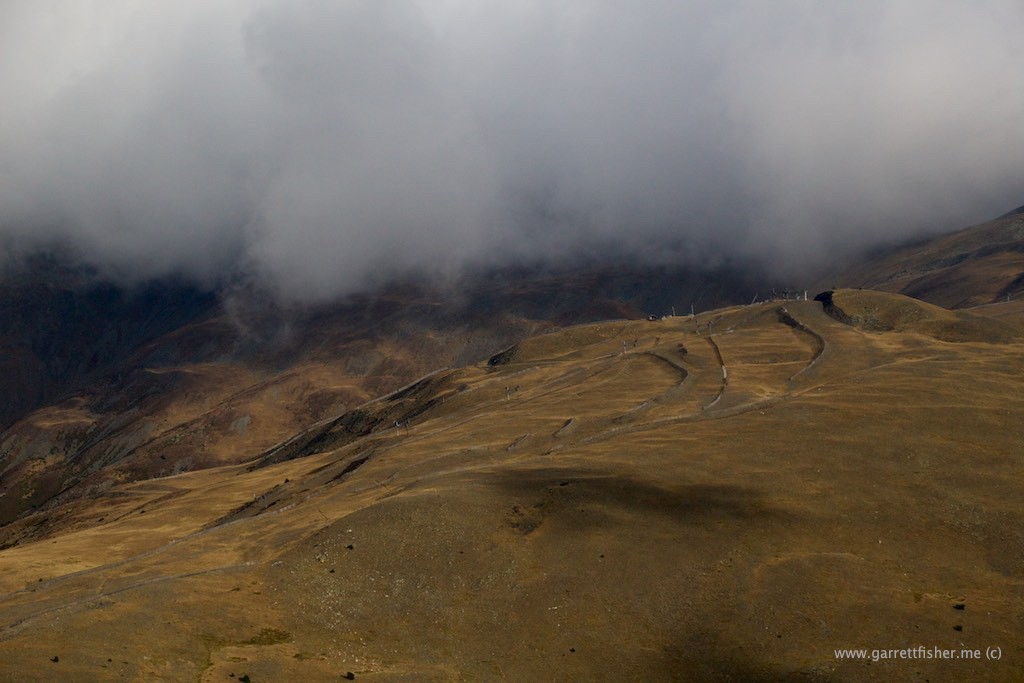 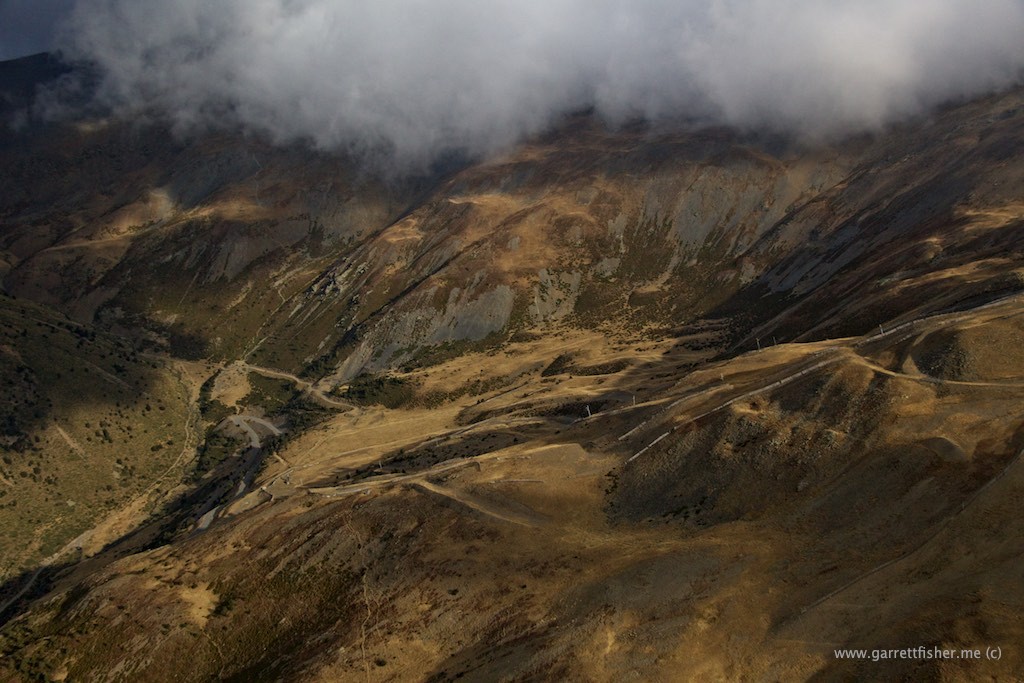 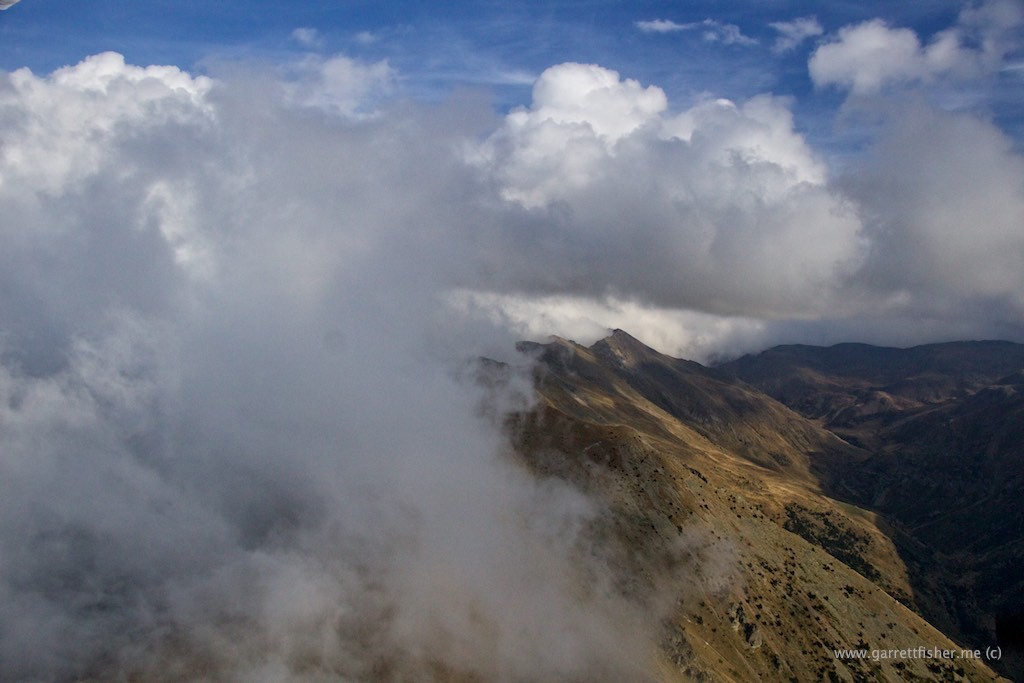 The last time I saw something like this was in the Salt River Range of Wyoming. This is a lee-side cloud formation, in constant motion, created by mountain wind. 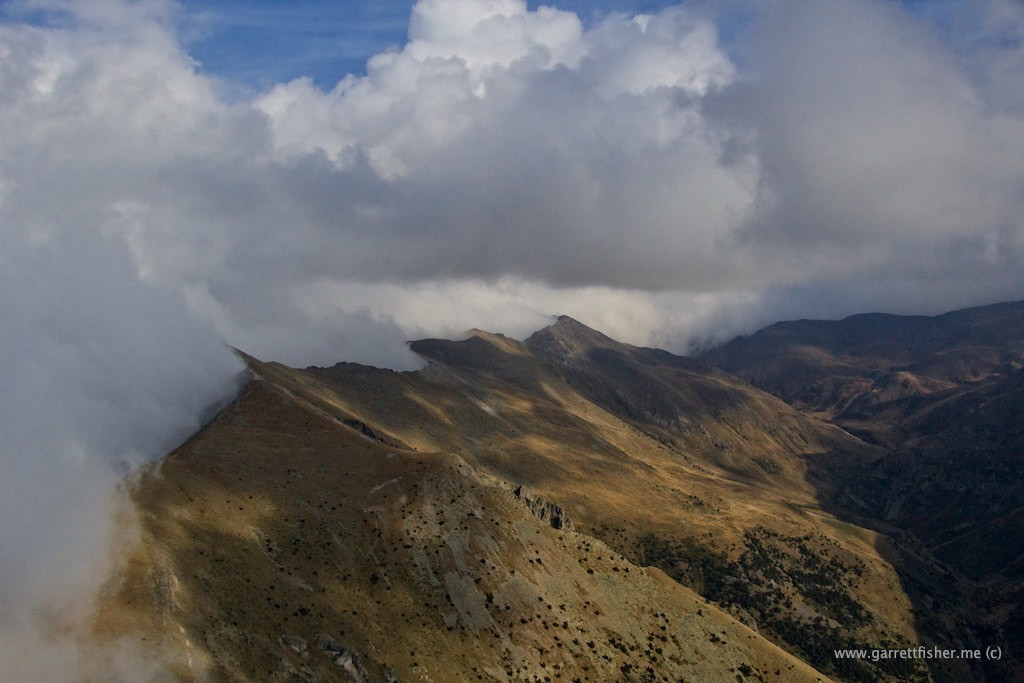 I tried to drive up here a few days ago. We were able to get above timberline, though farm paths were off limits. Herds of cattle and horses graze up here. After a difference of opinion with an obscenely enormous bull with a scrotum the size of my skull, my caution level is a bit higher. 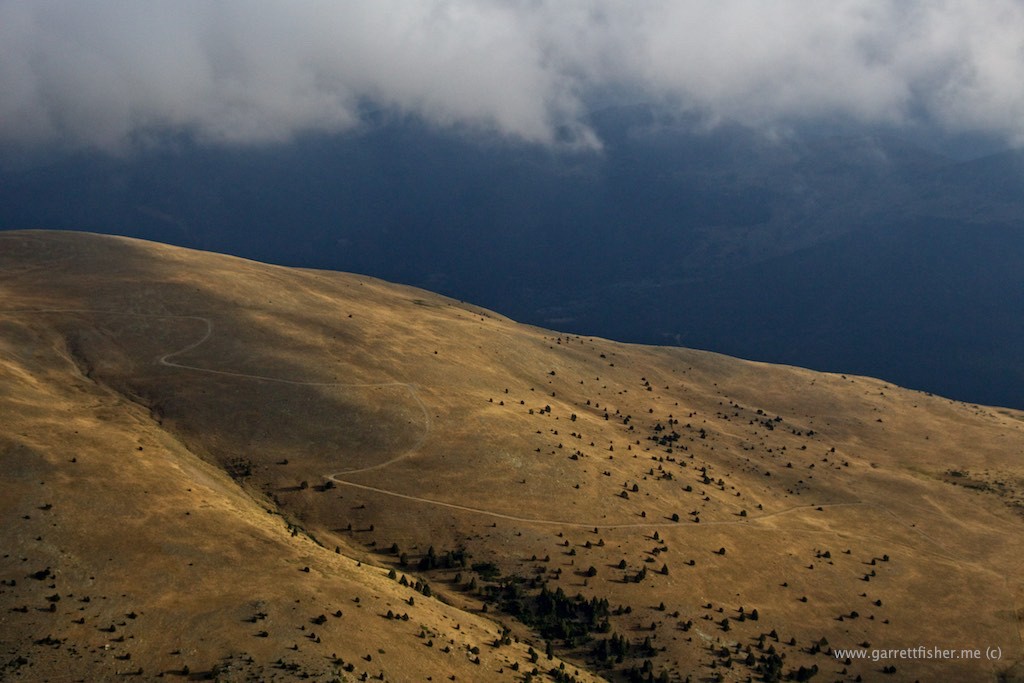 Closeups seem to work well with the new lens. Back in Spain. 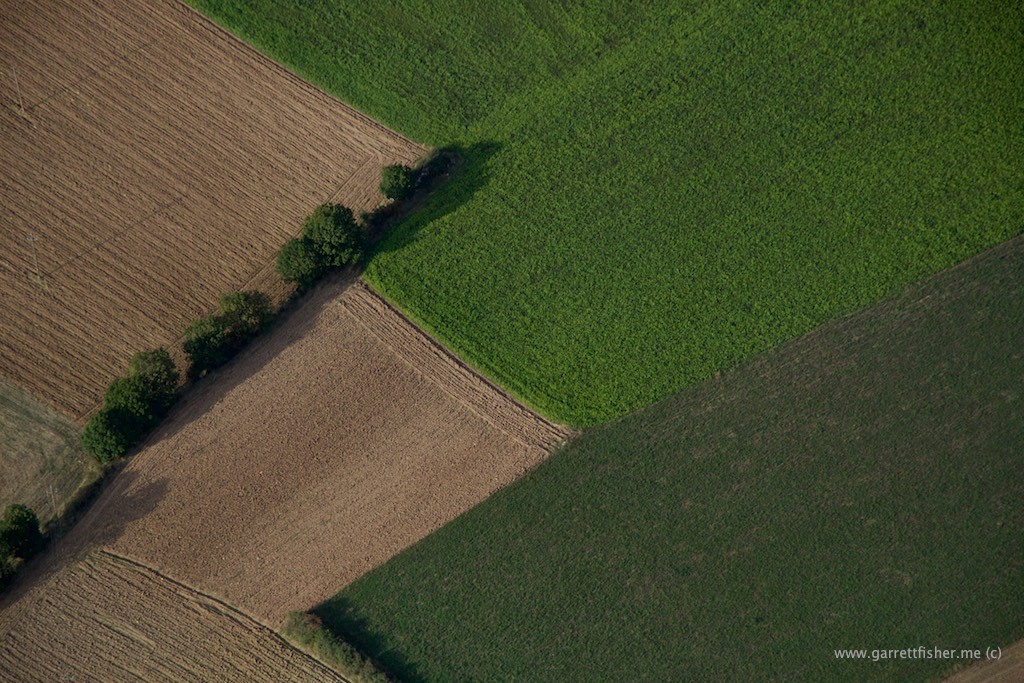 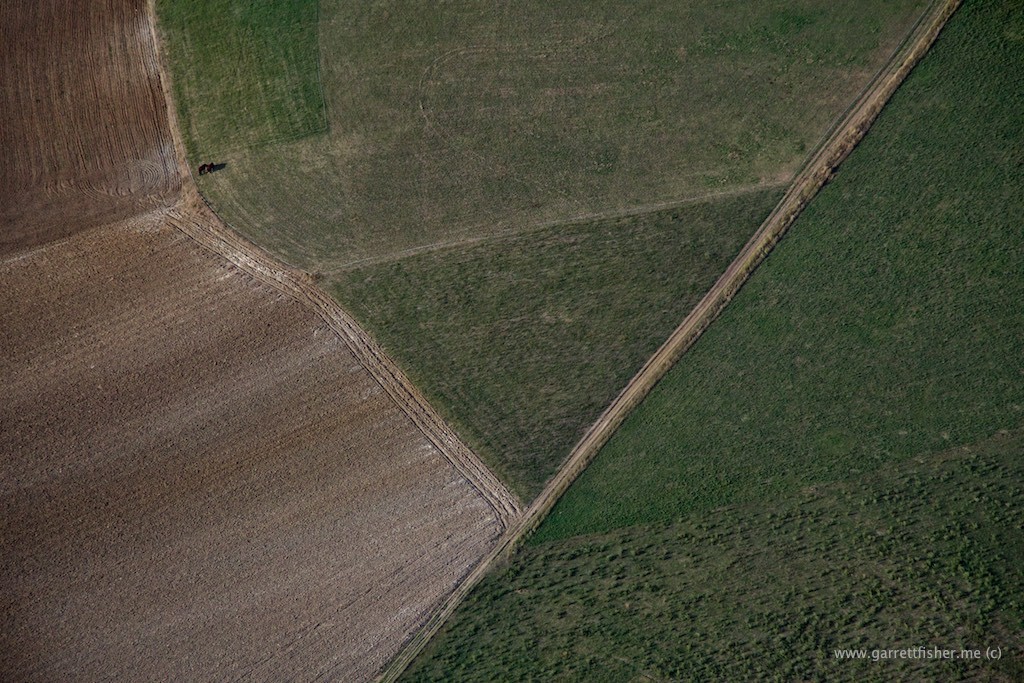 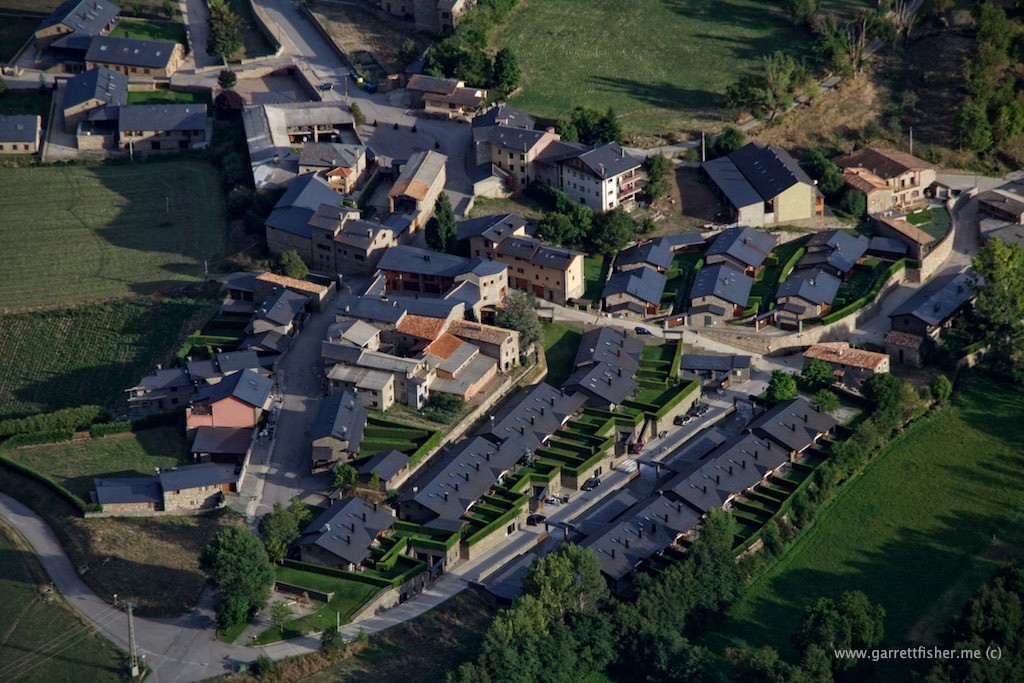 One of these days, I will take my wife up this road and make her carsick. Its a tradition of ours. 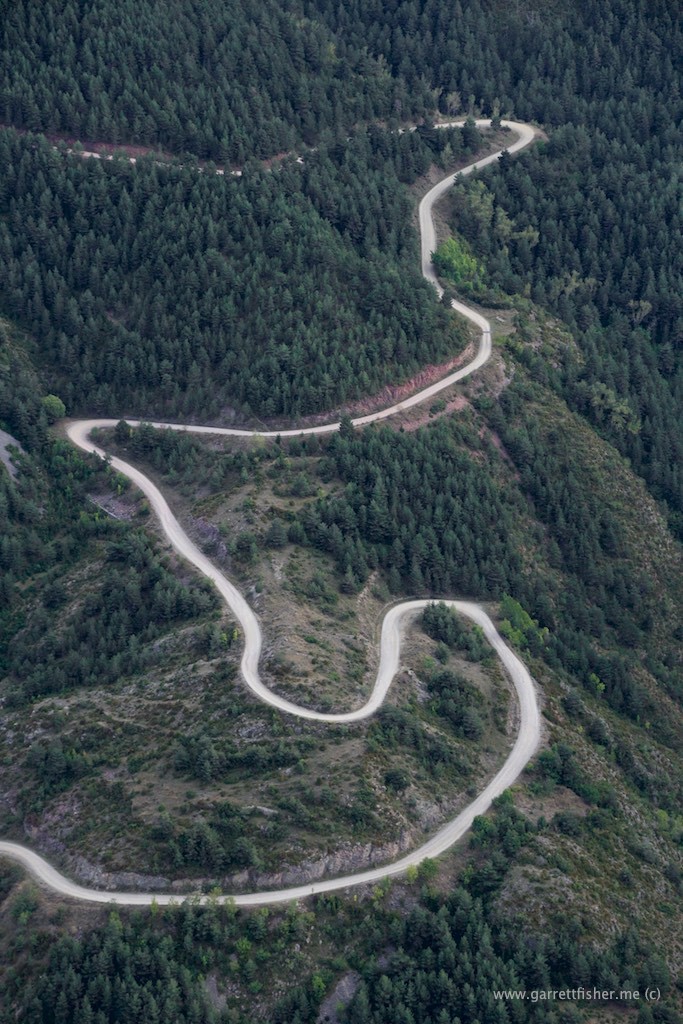