When I made the decision to launch the Global Glacier Initiative, it was a de facto decision to purchase a second airplane. The current aircraft is too slow, cold, and range limited to contemplate some of the far-flung places one must go. There is also the reality that it is limited to 16,000 feet in altitude which, while that worked for the Rockies and Alps, it won’t cut it for some other mountain ranges in the world.

There is also the reality that the PA-11 is not the aircraft that I would have naturally bought if it were entirely up to me. My grandfather had a 150hp Super Cub while I was growing up, restored the PA-11 during my childhood, and then abruptly said, when I turned 16: “You’re taking lessons in the 11.” “But why can’t I in your Super Cub?” “It’s my pride and joy and you’re not touching it.”

I ended up soloing in the PA-11, flying to 25 states, 11 countries, five time zones, two continents, the glaciers if the US Rockies, the highest peaks of Colorado, Utah, Wyoming, Montana, Tennessee, North Carolina, the Pyrenees, and the Alps. I laid eyes on Africa for the first time from the PA-11. It has seen both sides of the Atlantic, the Great Lakes, Great Salt Lake, Mediterranean, North Sea, and the Mississippi, Missouri, Colorado, Rhine, and Rhône Rivers.  Let us not forget that the PA-11 took me to every single glacier of the Alps in the summer of 2021. It has served me well, has been owned by three generations of the family (even if we all do not necessarily love each other), and will not be sold. I will need something to fly when the new toy is down for maintenance….

Naturally, a Super Cub was going to be the airplane I would purchase. Are there better aerial photography platforms for what I am doing? Probably…and I don’t care. I didn’t even look. I just wanted a very nice Super Cub, which I started shopping for in May of 2021.

After entertaining three serious candidates and traveling to Portugal and Italy, I was about to travel to the Netherlands to look at one when an aircraft popped up in Norway. It was an exquisite machine, restored by someone who has a similar taste to me. The right decisions were made when it came to options. I was on a flight to Oslo three days later.

Two hours after my 10-minute test flight in crap weather, the deal was signed, and the bank transfer initiated. Five days after that, after sitting in the dark in various hotel rooms, watching unseasonably sunny weather in Norway come to an end, the insurance company finally issued coverage, along with clearance of the bank transfer. It was time to fly my new purchase from 59 north latitude, which is 483 miles below the Arctic Circle, from one of the rainiest places in Europe, to a point 1000 miles to the south….in early November, when the sun sets just after 4PM. Who cares if I have 30 something hours of time in the Super Cub, or that I do not have an instrument rating?

I planned on getting to Halmstad, Sweden on the first day. The weather was foggy at Skien, Norway until almost 1PM, which meant I’d have just enough time to get to my destination for the night. I wanted to get away from the ocean as fast as possible, as the days were shortening at a ridiculously fast pace, soon to be only 6 hours long. Autumn is the rainiest and worst time in Scandinavia for weather.

I filed my flight plan as the fog lifted on one side of the airport. As I was getting ready to go, I got a call from flight service in Oslo. “You just filed a flight plan for departure to Sweden in 20 minutes?” “Yes.” “You can’t do that. Flight plans must be filed at least one hour before departure.” “Well, that is dumb. I need to get out of here before nightfall. It will be an hour in flight before Sweden. Does that work?” “No. It must be one hour before takeoff.” “Can you make an exception?” “Let me see. Why didn’t you file an hour before? Who files just before takeoff?” “I do it all the time in other countries. I am just trying to get out of Norway.” “Read the AIP.” “For a one-hour flight? I talked to an instructor, and nobody mentioned it.” “Let me see what I can do.”

He called back a few minutes later, advising that Sweden prefers landing at an international airport close to the border. In the event of going some distance into the country, as I was, they want waypoints on the flight plan every 30 minutes. I refiled based on the elaborate flight path in my navigation software. He called back again, as they were in reverse, so it was back to zero. “What about customs?” “What do you mean customs?” “You have to get clearance to leave.” WHAT?!?!? I am leaving, not bringing anything in.” “Read the AIP.”

I called customs at the nearest international airport. They said that, since I was leaving from a domestic airport, I need to submit the request 4 hours before I leave. “Four hours? What on earth is this?” I exclaimed, to which the officer was nonplussed and gave me the email to make my request. At this point, flight service called back and said there was a problem with the next flight plan as customs had not given the ok. “Would it be easier if I flew to Torp first?” “Yes, that would be much easier.” “Do I need a flight plan?” “Yes.” Eye roll. “Please file it and then I will let customs know you’re coming.”

I filed another flight plan for Sweden, two hours later, filed the original to Torp, and hopped in my new purchase. Taking off, I veered to avoid fog, clearing the trees to see what awaited me on a cloudy, partially foggy day in Norway. As I got used to the speed of the aircraft and the lay of the land, only a few minutes went by before I was on with ATC at Torp 18 miles away, and then my first landing in a Super Cub with flaps, where nobody else was in the plane. It was very gentle.

At the airport, I walked around aimlessly for customs, until they drove up and found me. We went back to the plane, where they asked for identification and pilots license, followed by: “We understand you have something to declare.” “What do you mean I have something to declare? I was told I have to stop here by flight service to go to Sweden.” “Are you taking anything out of Norway?” “Gjetost.” “What?” “Gjetost. You know, the brown cheese.” Chuckling a bit…” anything else?” “I bought the plane.” “You bought the plane? Are you taking it out of Norway for good?” “It will come back next summer.” “Do you have the contract?” Handing them the papers, they made a few phone calls. “You need to export the airplane.” “No, I don’t. It is staying on Norwegian nationality.” “But you still need to export it.” “How? The CAA won’t issue a Certificate of Export unless I de-register it, which I am not.” “You need to use a freight forwarder.” “Oh God! For what?” “To make an export declaration. Were you the guy that called earlier?” “Bitching about the 4 hour wait? Yes, that was me.” “Hold on.”

More phone calls were made, to which the customs agent advised that “it is the responsibility of the sellers to export the aircraft.” I showed their phone number and he called them, where they sent a signed power of attorney within 20 minutes. 90 minutes later, the freight forwarder had the export declaration done, which consisted of a piece of paper with the buyer, seller, price, and description of the airplane and a small invoice. By this point, it was 3PM, which was too close to dark to make it to Sweden.

I cancelled the flight plan, walked 20 minutes with my suitcase to a taxi, and went back to the same hotel I spent the prior three nights. My Somali dual citizen taxi driver offered some educational insight on the ride to the hotel: “When the Norwegians decide something, it is the end of the discussion.”

Just after takeoff in Skien, Norway…getting used to a new plane and wondering what I just got myself into weather-wise. 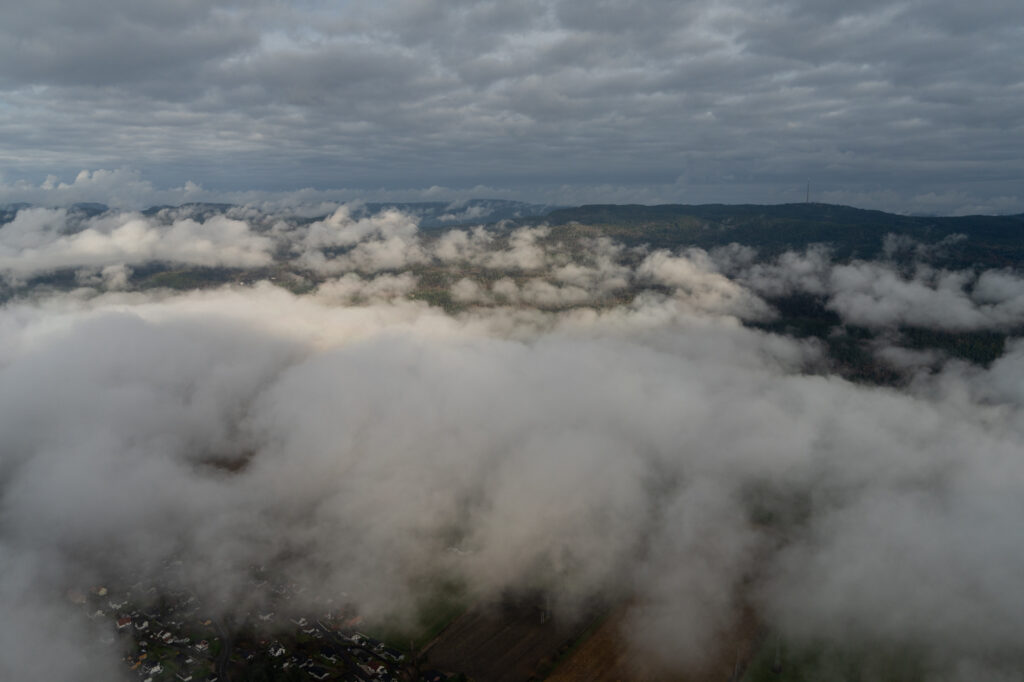 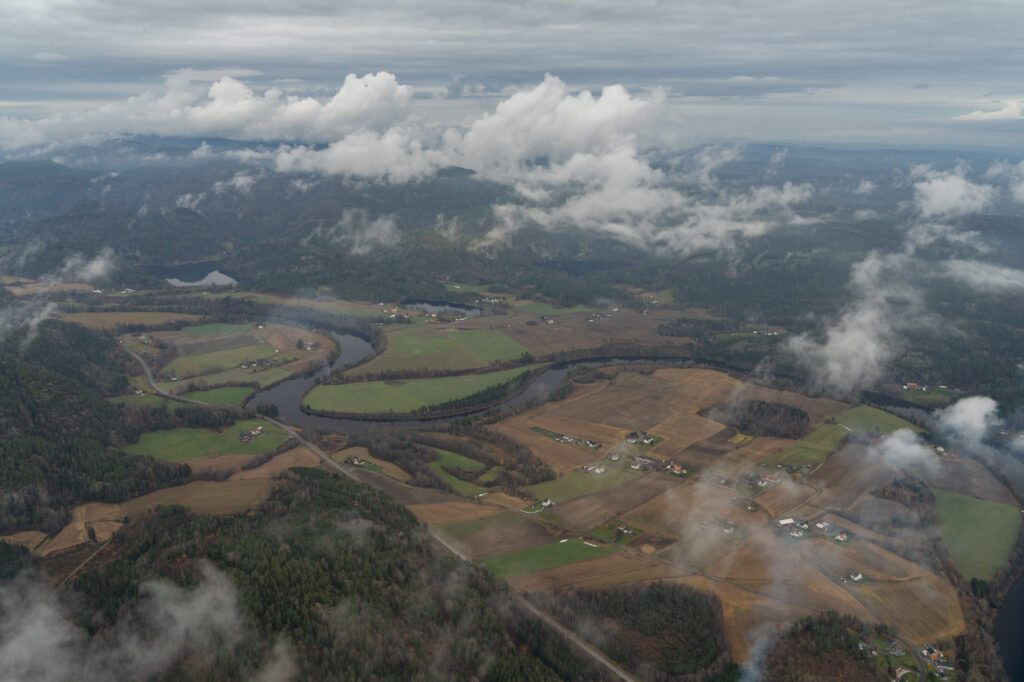 Parked at Torp, Norway for the night. I have been trying to come up with a nickname for the airplane and nothing has stuck. I tried “Ragnarök” and my 1/4 Norwegian wife said no. 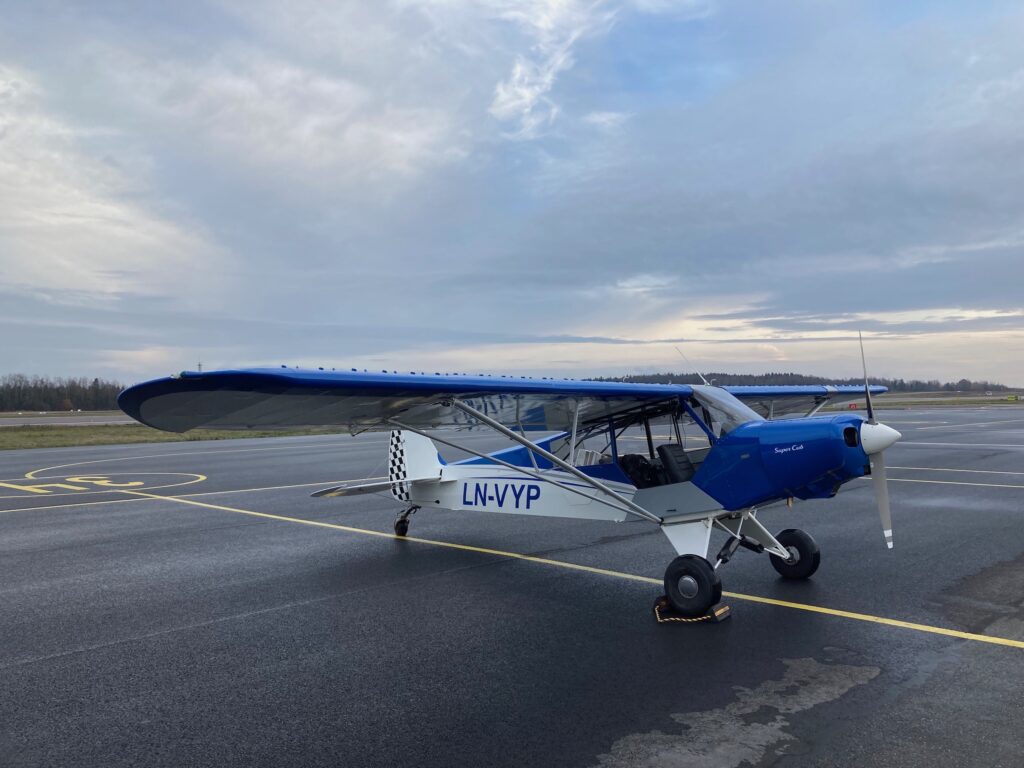