Sleeping on my glorious mattress proved to be far more comfortable than masochistic camping trips of the past – with rocks jammed into my rib cage or hip. Though while actually sleeping on a 21” wide inflatable mattress, I couldn’t help but have feelings of personal victimization and endurance until I pulled the plug on it in the morning to compare the difference. As I lay there with the mattress deflating, the hard ground was like a bed of nails compared to the silk pillow I was just sleeping on. By far, I recommend anyone camping spend $100 and get one.

It was one of those mornings filled with energy and anticipation. At that hour, one can feel the animals, birds, and wind waking from its rest with the rising of the sun. Had I been the next valley over in our house we used to live in, I would have felt nothing of the sort and snored on until 8AM, then complaining about the brightness of the sun while walking our over-eager dog for his requisite mile long defecatory waddle. 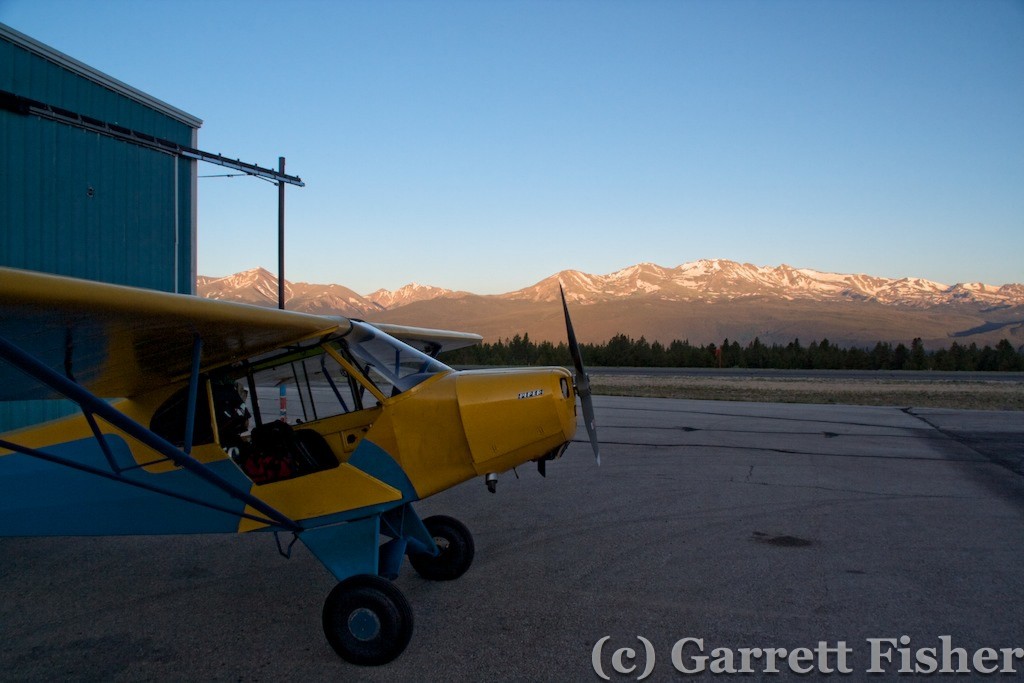 I broke camp, packed everything up, ate trail mix and pulled the airplane out of the hangar at Leadville for one last time. I cranked the prop through and she started on the third turn as usual, with a little cold weather begrudging. After about 8 minutes of idle warming, I taxied down to the end of the runway, and had to wait for a couple of powered parachutes to take off in front of me – fellow campers who enjoyed a night of sleeping in $60,000 fifth wheel toy haulers – replete with heat, leather furnishings, and king size beds. I converted my sheer envy to hate as I waited my turn. Not everyone can purchase $60,000 toys for occasional use, but we all can hate to make up for it.

I took off at 6:51 AM and noticed that the Rocky Mountain air was remarkably still. No wind. No bumps. Then again, I don’t ever go flying at this hour, so I wouldn’t know. In the lack of wind to create mountain updrafts, it is challenging to get altitude with full fuel and my ghetto rigging of luggage, so I circled east of the airport to get up to altitude to head about 6 miles away to Mt. Sherman.

I had thought I got photos of all 54 mountains over 14000 feet in Colorado for a book I was working on, except I realized I did not have a good shot of the CLOSEST ONE TO THE AIRPORT. It can be very difficult to distinguish a 13,950ft peak from a 14,025ft peak right next to it, so my protocol is to shoot a ton of pictures of the range and sort it out later. Well, they all sucked for Mt. Sherman.

It turned out to be a good thing that I missed Sherman, as I would have had a book with no bare rock exposed shots of any 14ers. Being covered in snow is the natural state of these mountains, though for three months, they are melted off and accessible. The texture and terrain details are remarkably illustrative of the character of the mountain, so a few without snow would be good.

I found a hiker at about 13,500 feet hiking along a ridge and it struck me as a beautiful sight. Instead of bare rock and unforgiving terrain, it was a sign of individualism that this person was 2,000 feet above timberline, by himself, at 7AM walking a ridgeline. This has to be one of the most redeeming parts of Colorado culture – the fact that no part of the state is off limits – and mountain climbing is as normal out here as a morning jog in the vileness of suburbia is to eastern cities. I gave him a wing rock to signal my approval and camaraderie – and he just stopped and had a look as though I was drunk. I have been told that Coloradans get very pissy if someone introduces the droning sound of an aircraft engine to their wilderness journey and are liable to call the FAA and spew a tirade. Too bad for this displeased nature zealot, I was flying within the confines of federal law.

Mt. Sherman struck me as being remarkably easy to hike. The incline is basic. There is no technical component to the hike – merely walking – and there is nowhere to fall to your death. Climbing this mountain is simply a question of preparedness for the elements, stamina and endurance, and the desire to do it. It’s not the wilderness people ignorantly and dramatically make it out to be though the enemy to be overcome is one’s own obesity, arbitrary fears, and laziness. 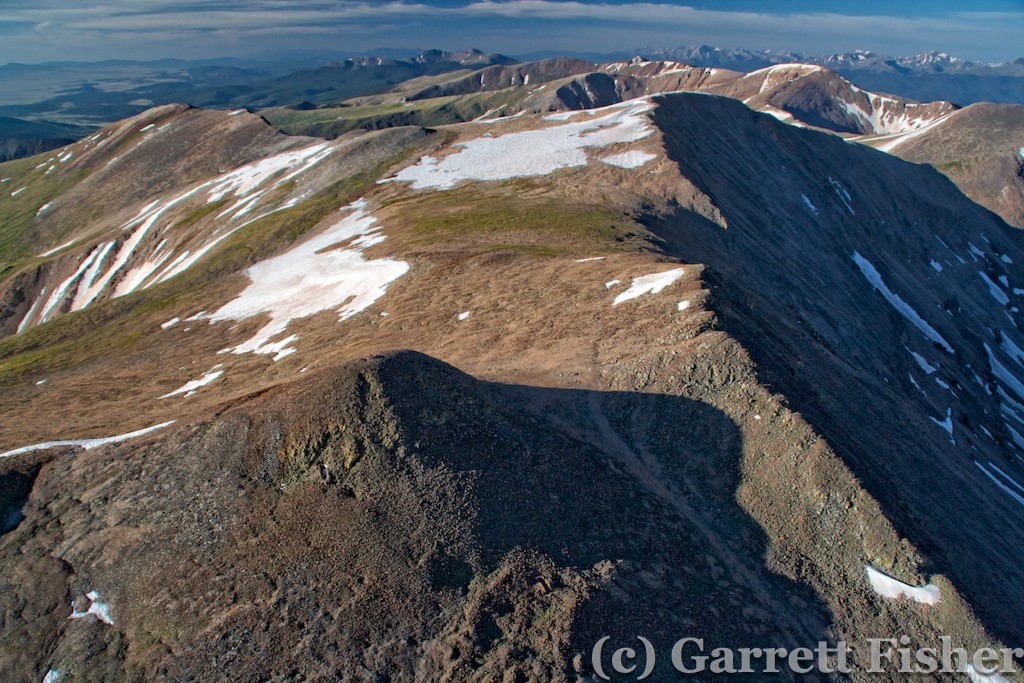 After Sherman, I went 10 miles north to Mt. Bross, the second of two 14ers I stupidly failed to photograph. Bross is about halfway between Leadville airport and where we used to live, so that is further confirmation of my own retardation. Bross is another mountain that looks very easy on the technical front. It amazes me the amount of death and search and rescue operations that occur – as these mountains are relatively close to services, not that severe, and with half a brain, death is not at all necessary (there is a chapter in an upcoming book called “Near Death Experiences” that will recount my own flirts with death in Colorado, so that flies in the face of what I just said, or I don’t have half a brain per my own assessment). 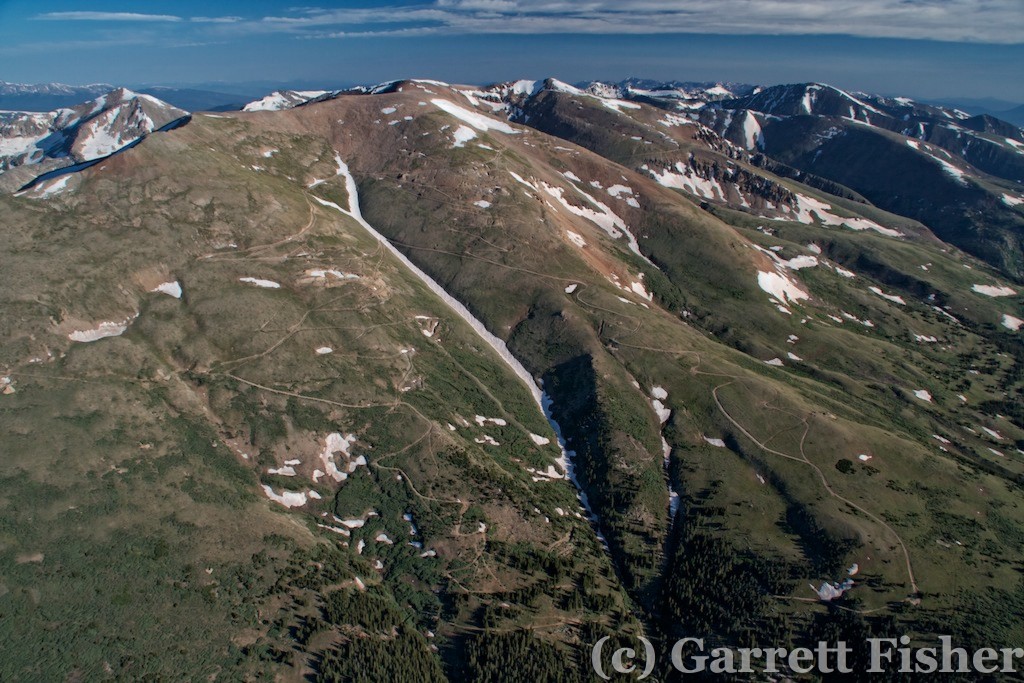 After Bross, a turn to the NW in the direction of the headwaters of the Yampa River took me near Quandary Peak. Quandary is the only 14er in Summit County, and is the closest to our former home in Breckenridge. The original pilgrimage to Colorado in 2005 with my friend Kyle involved making quite the stir over the name (he has a fetish for elaborate words beginning with Q). That, and my presence in the state was a quandary in and of itself, pining away for million-dollar rustic cabin lodging, unemployed, and with no hope to find a job there to support such out-of-balance pricing. Since then, many of my hikes and flights have revolved around this ubiquitous mountain.

I passed by Quandary and got a full zoom view of the peak. This shot will definitely make it into the book as it demonstrates the detail of the rocks above 13,000 feet on these mountains. Grass gives way to walking on nothing but piles of rocks, an experience similar to the surface of Mars. Two hikers are in the photo. They didn’t wave or make any effort to indicate pleasant surprise that an antique airplane was flying by. Rather, it seemed they too were irked at my presence. 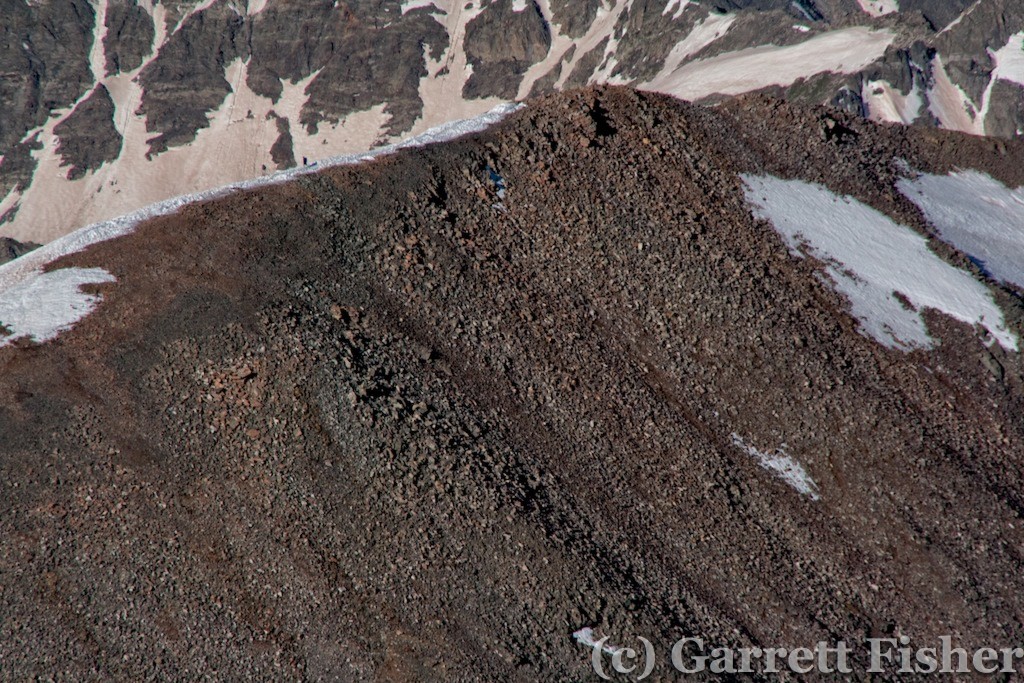 After Quandary, I had to make one last flyby of Pacific Peak. Its not a 14er, rather a really pointy spire that just invites a flyby when I get near it. My grandfather loves photos like this as it’s exactly what he had in mind when he restored this airplane, that his grandson would zoom past granite peaks in the wilderness. Why bother with gentle evening flying over rolling upstate NY hills when there is granite that can be flirted with? 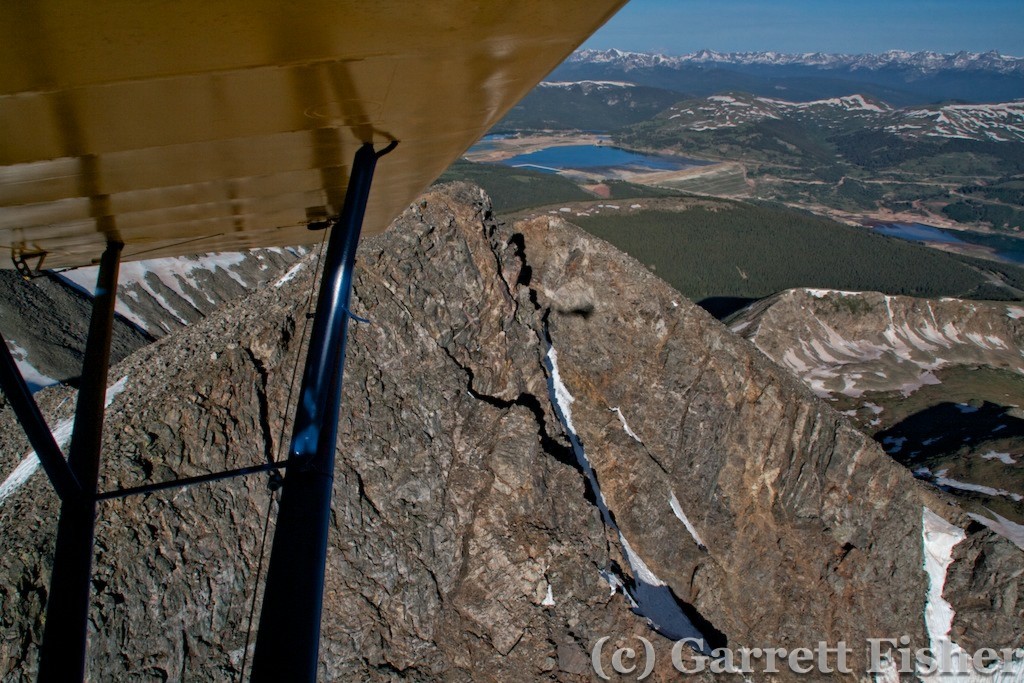 Pacific Peak – My Grandfather Just Loves This Kind of Stuff

On the path to the Yampa River, I flew over Copper Mountain ski area, then the back bowls of Vail and the east end of Vail itself. It was at this juncture, one hour after getting in the airplane, that I had to piss like a racehorse. Stupidly, I take vitamins in the morning, and they elicit urination. I was another hour from an airport and was not turning back, for any reason. I had another 800 miles to go that day, and inopportune urination did not fit in my plans. So, for first time, I improvised using an empty 16 oz. water bottle. I thought the process would be easy and straightforward – and it was not. Clothes get in the way, so most of them come off. Well, they can’t come off partially, because they push on the stick (control stick, for the airplane, not the other “stick”) and push it nose down, which would result in a smoldering piss-filled crater. So off they come. Then it’s a matter, given the seat positioning, to get the kinks out of the plumbing, and everything nice and secure so I don’t end up pissing all over myself. After an extended amount of drunken flying, cursing, and twisting around, we’re set. I check the bottle about 3 more times to make sure piss won’t spray everywhere and then, unclimactically, I cannot go. It is such a case of mental apprehension that I would literally have my kidneys explode if it got bad enough, and it would not come out. After some attempts at Lamaze breathing, I finally had to distract myself and pretend like I was not about to urinate all over my clothes, expensive gear, and the cockpit for it to start to flow. It filled half the bottle – and fortunately ended without spillage.  Reassembling the clothing was quite a process – and I couldn’t get everything situated the way it belonged, which made for some puzzled looks as I finished dressing after getting out of the airplane when I landed. I don’t plan on repeating the task. 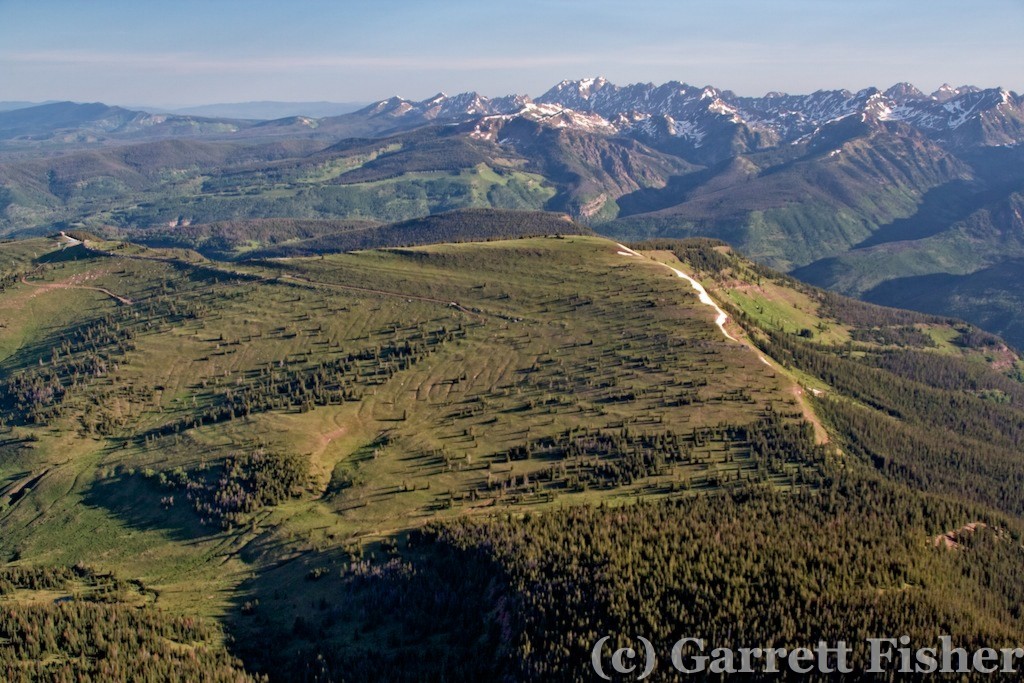 Peak of One of Vail Ski Area’s Mountains, Gore Range in Background, Commencement of In Flight Urination

The whole escapade of practically nude in flight urination was completed roughly over the top of an area from the summit of Vail ski area to the summit of the ridge on the north side of the valley, though it seemed like it took a half hour instead of 8 minutes. Now out of the higher terrain, I was en route to some of the “lowlands” of Colorado, where the terrain is between four and six thousand feet, instead of twelve and fourteen. I crossed the Colorado River at State Bridge, possessing even a name probably because the river makes a 70 degree change in direction. Otherwise, its dry, remote, and dull down there. A little further up and I came across quite a railroad: winding, curving, passing through a canyon and over a ridge. I thought to myself “what it must have been like ‘back in the day’ when they used the railroad. I wonder why so many are no longer used.” Within 3 minutes, I photographed a train on that railroad. So much for “no longer used.” After crossing the hill where the terrain was, I was heading close to the headwaters of the Yampa River, passing over a gentle plateau of grass and sagebrush as rocky summits gave way to lower terrain. 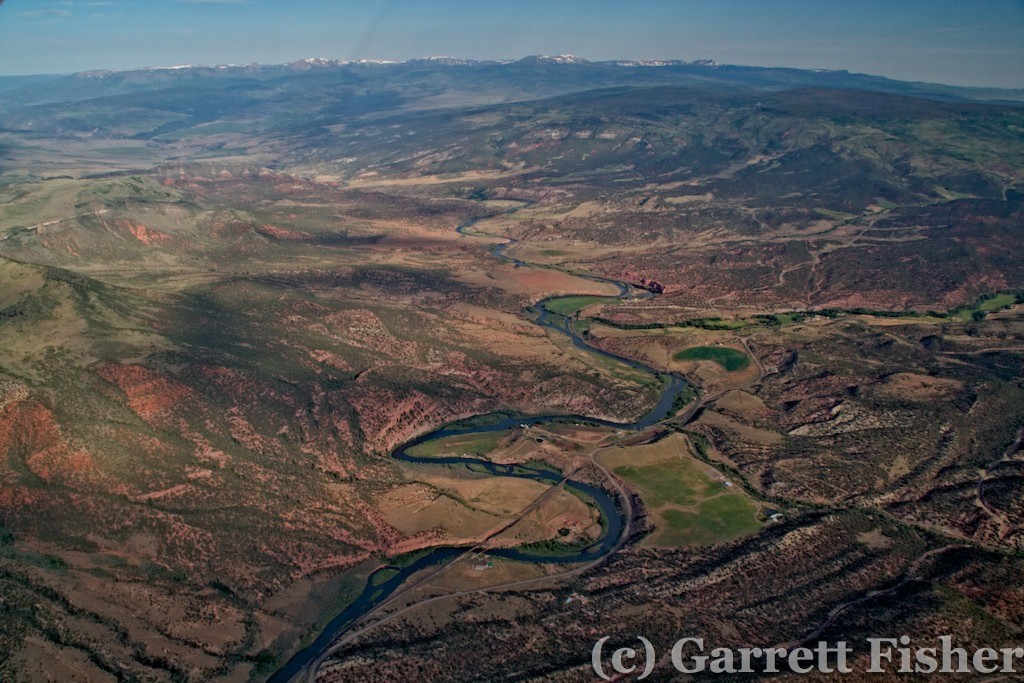 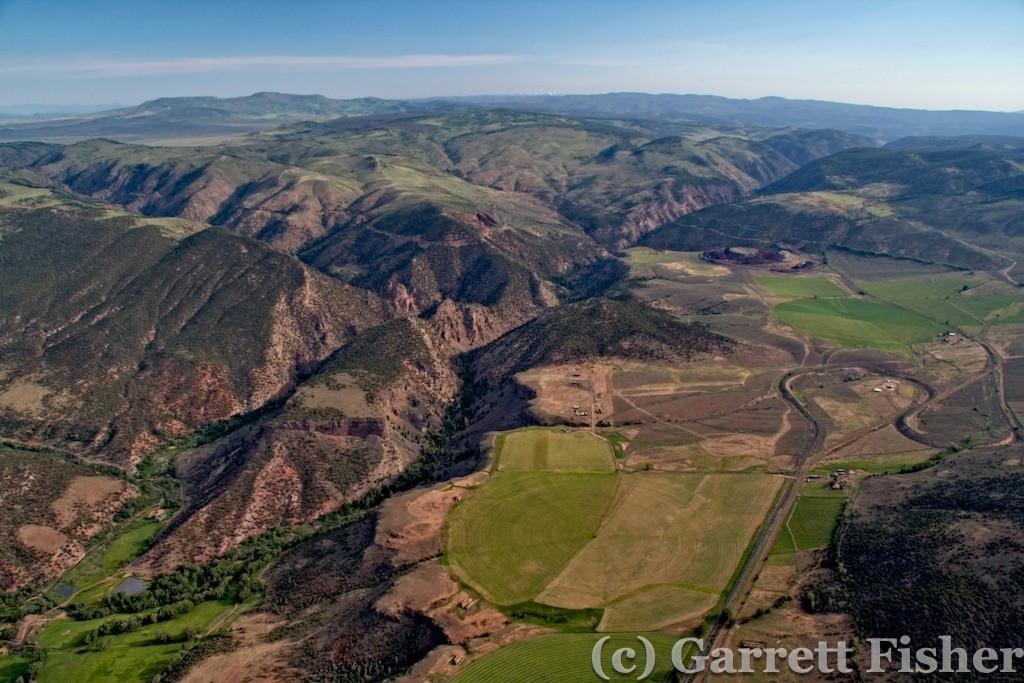 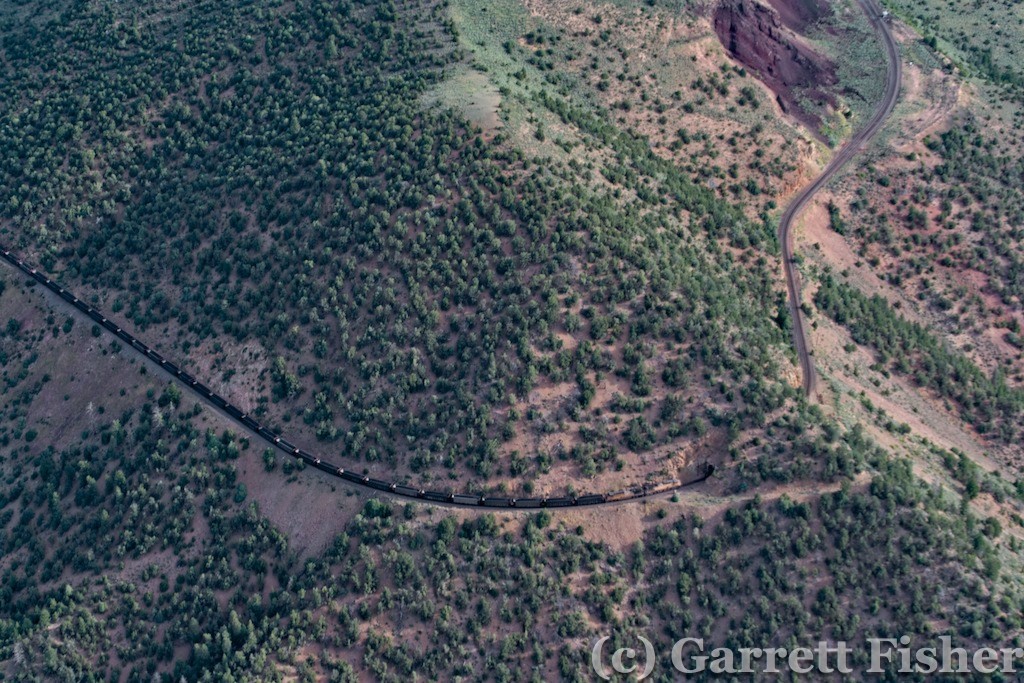 Oh, They Use the Railroad 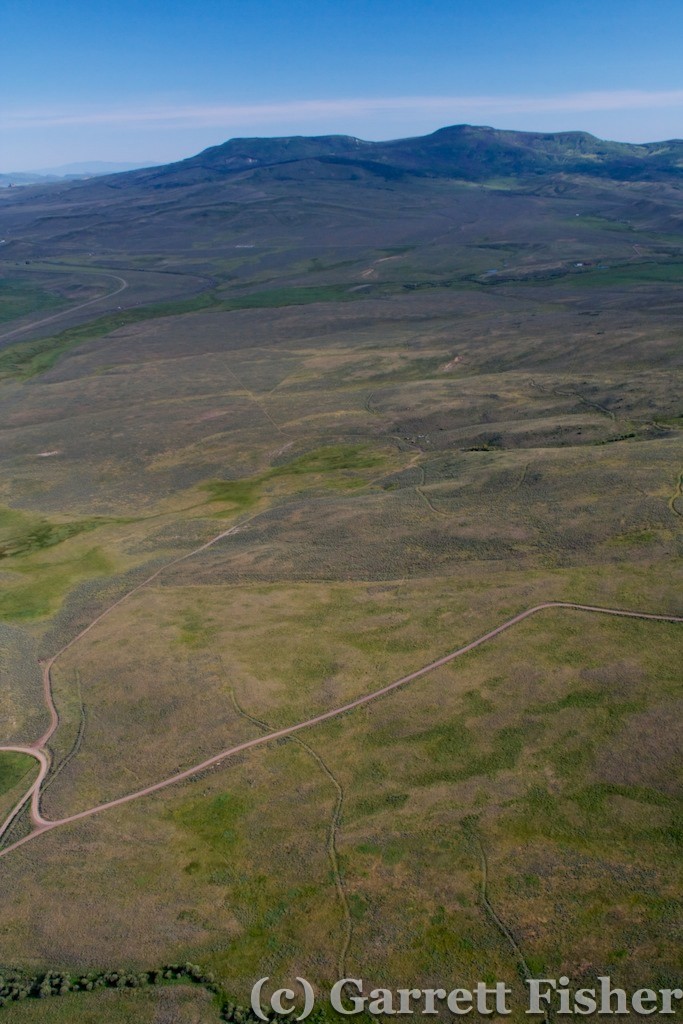 Plateau on the way to Yampa, CO