I have an assembled an airplane before. It was an ill-fated, poorly informed, and silly decision to purchase a Piper J-3 Cub that had been turned over in a thunderstorm, fix it, and fly it. I must say, one does not know fear until he gives an airplane full power that he put together himself. That sobering reminder of flaming death aside, I knew that it always takes longer than expected, so I factored that in the presumption that it should take a long day to re-assemble.

It did. The only problem is that there was a long list of new equipment, and all sorts of fun things had to be worked out.

After about 6 weeks of gerrymandering in the cold, engine tests, playing, and tinkering, it was time to take things to the next step and see if this thing would fly. There are so many hilarious issues with German culture and regulation that I am not even going to list them all. Suffice it to say, I dusted off my ragged piece of paper from 1999 that comes from the FCC that gives me a license to operate a radio. Yeah, they want those over here. I got it originally to fly to Canada and had to laminate it myself. The Feds thought so little of the document that they sent me something that came out of an inkjet printer.

Next was the radio “station” license. In the US, an airplane with a radio can use it. In Europe, the radio people have to authorize the airplane with a radio with a radio-licensed pilot to use the radio (that is as dumb as it sounds). $165 later, and I have me a nice PDF from the FCC that I have to print myself and hell, if I even dream of lamination, that’s on me. Prices go from $0 to $165, and I don’t even get the sheet of paper! The Germans wanted sound paperwork. If I didn’t produce a sound certification, my landing fee would go from €7.98 to €16 (yes, there are landing fees. Don’t ask.). That was an exercise in philosophical futility, though I eventually solved that lovely little problem.

The day finally came to take a lesson to get familiarization with an instructor. The rules are pretty similar to the differences in driving between countries. An American can fudge through driving in Europe straight off an airline flight, though riding around with a local at least once helps to understand the foreign signage and subtle differences in rules. If I didn’t care about fines and issues with flight safety and having a pilot’s license, I could have just gone flying, though that is dumb. I opted for a ground lesson as US regulations require a test flight after significant mechanical work to be done alone. That, there was no point in risking someone else’s life, and I really didn’t need to be inventing how to deal with European rules on a flight where I could have potential mechanical issues.

An hour later, I had enough general information to execute a relatively local flight, deal with the control tower, avoid Frankfurt’s airspace (some of the busiest in the world), and also focus on the myriad of things that may or may not quite be right with a newly assembled aircraft. Mechanics or not, the plane probably was safer before disassembly than right after being put together. There can be no improvement from taking it apart.

After the lesson, I decided to make a go of it, as I was fresh with the new procedures. I checked every single bolt and screw that was touched on that airplane for the third time, opened the hangar door, pulled the airplane out, closed the hangar doors, got in, strapped the seatbelts (a new procedure, because I have a starter), and looked up to the master switch. Hmmm…….its on. Not good. Click it off. No sound. On. Nothing. “Push to start.” Nothing. Battery is dead as a doornail. Get out. Open the hangar door, push the plane in, close hangar door, get charger. Won’t charge. Fiddlesticks. The battery is so dead, the relay won’t engage, so I can’t charge using this method.

This reminded me of a conversation with a German mechanic. He reviewed the whole setup some time back and advised that charging through the iPad cigarette lighter port was silly because it would use amperage to run over a three foot wire, would use amperage to keep the relay open, and the master would need to be on to allow charging. “Well, can I pull the breaker for the push to start switch so no one can accidentally turn the starter over?” “Well, yes, but you don’t want to forget to turn the master off when you’re done. I really suggest installing a charging port as close to the battery as possible.” “Thanks. Yeah, I don’t see myself forgetting to turn the master off. I’ll get around to it.”

So now, I walk in the office, hat in hand, advising that I left the master on after charging on the very first time. The mechanic’s advice was quite simple: “the only way you’re going to charge that thing is at the battery. You’re going to need a charging port installed.” I finished his sentence: “like you told me in the first place, I know!”

Stabilizers attached. No elevator or stringers yet. 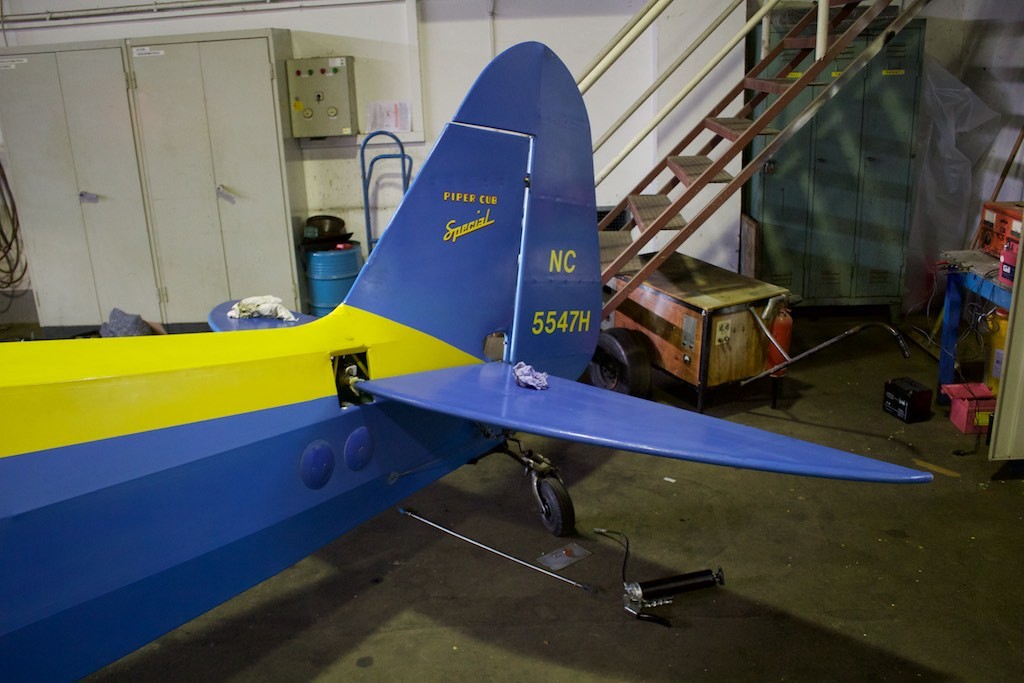 Elevators on, referring to the manual…. 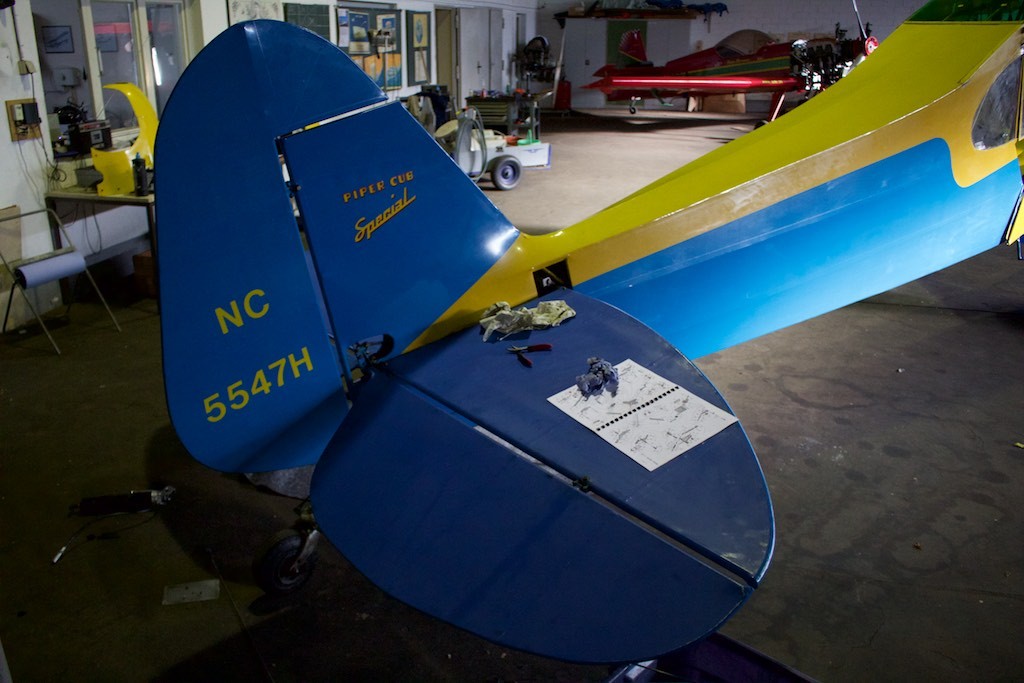 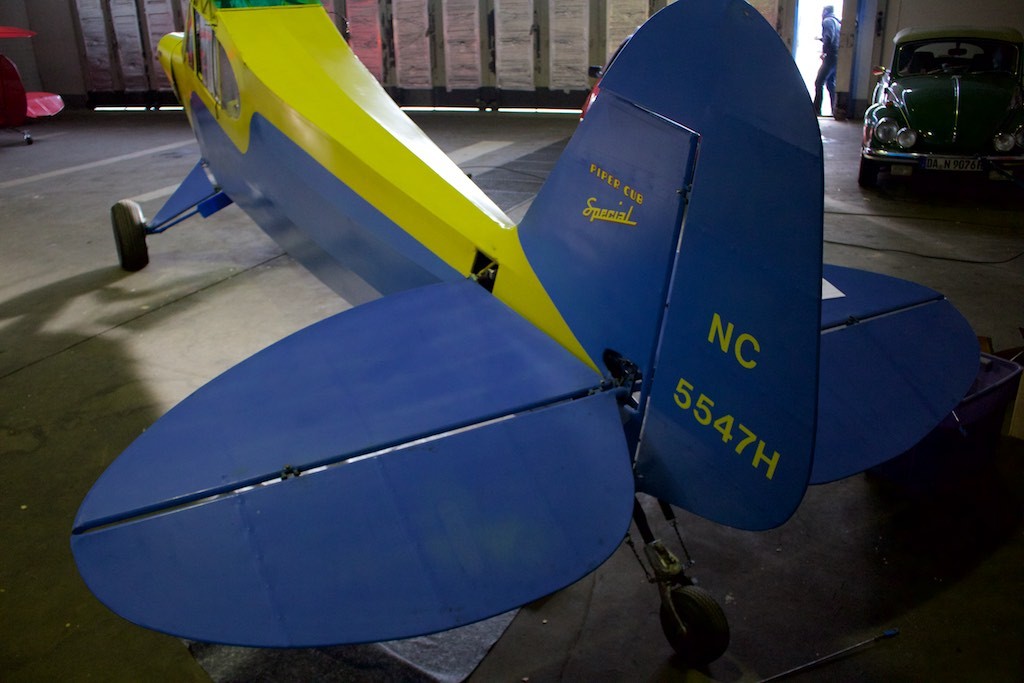 Laying out the puzzle pieces. 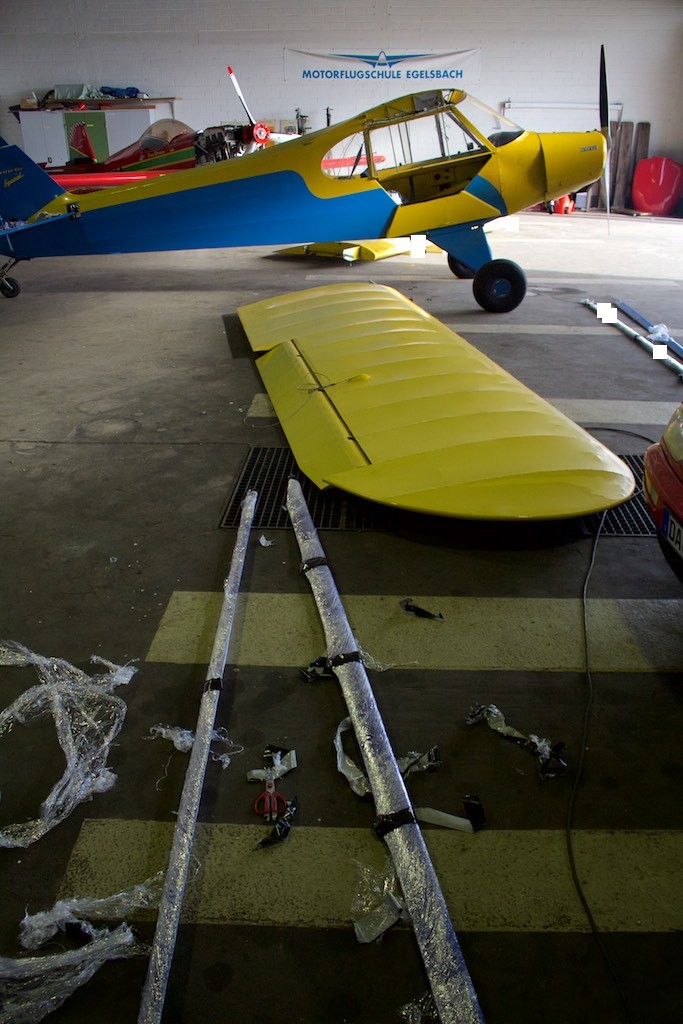 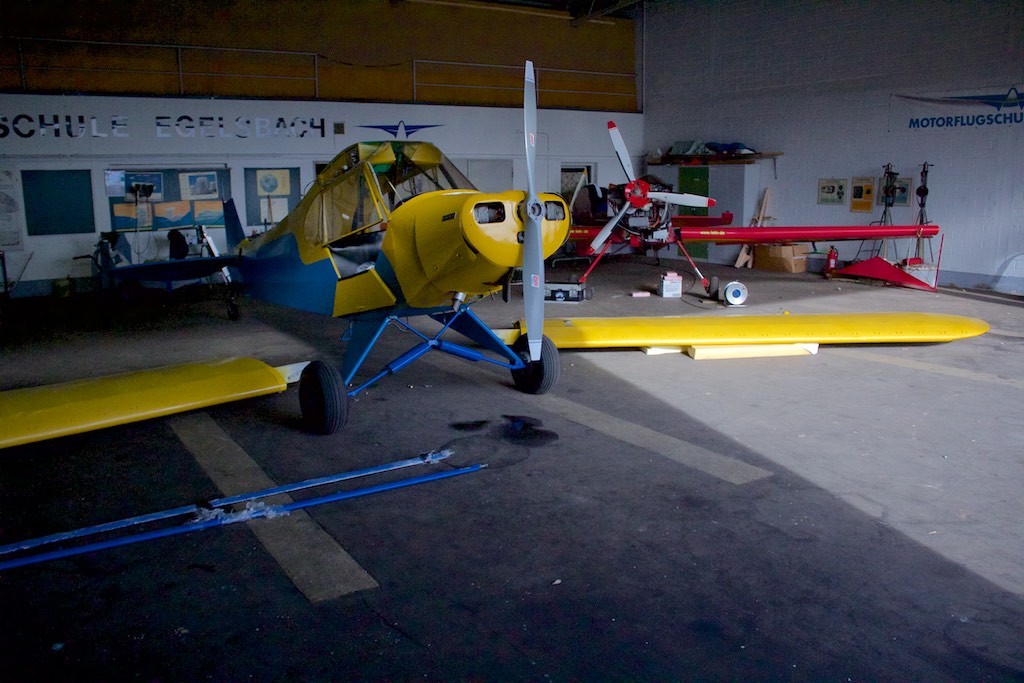 First wing on. The wrapping plastic makes it look like IKEA furniture. 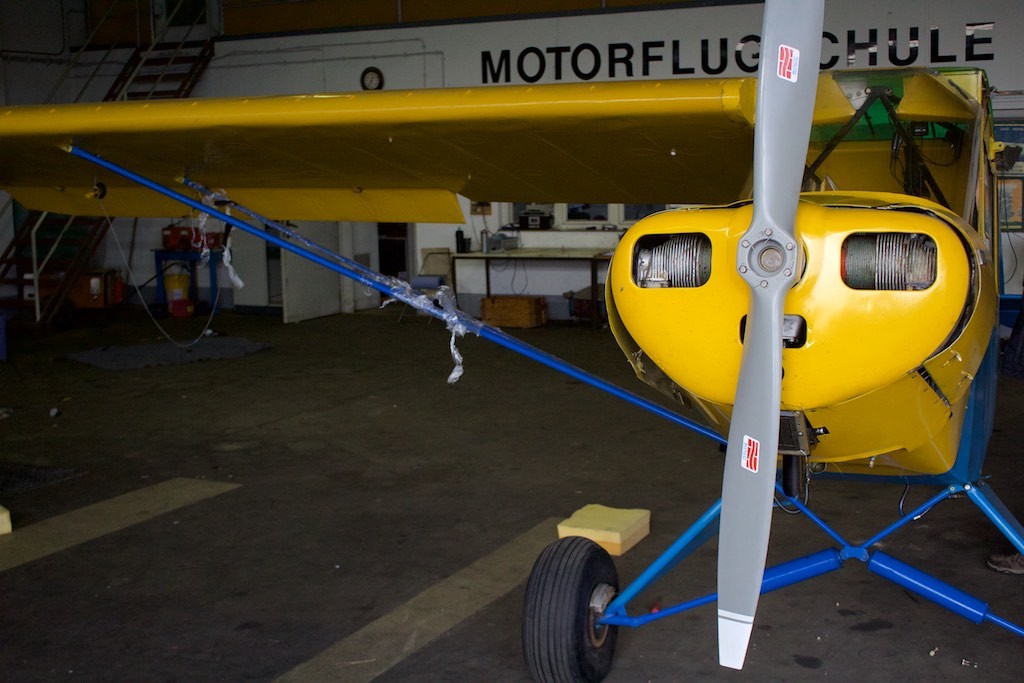 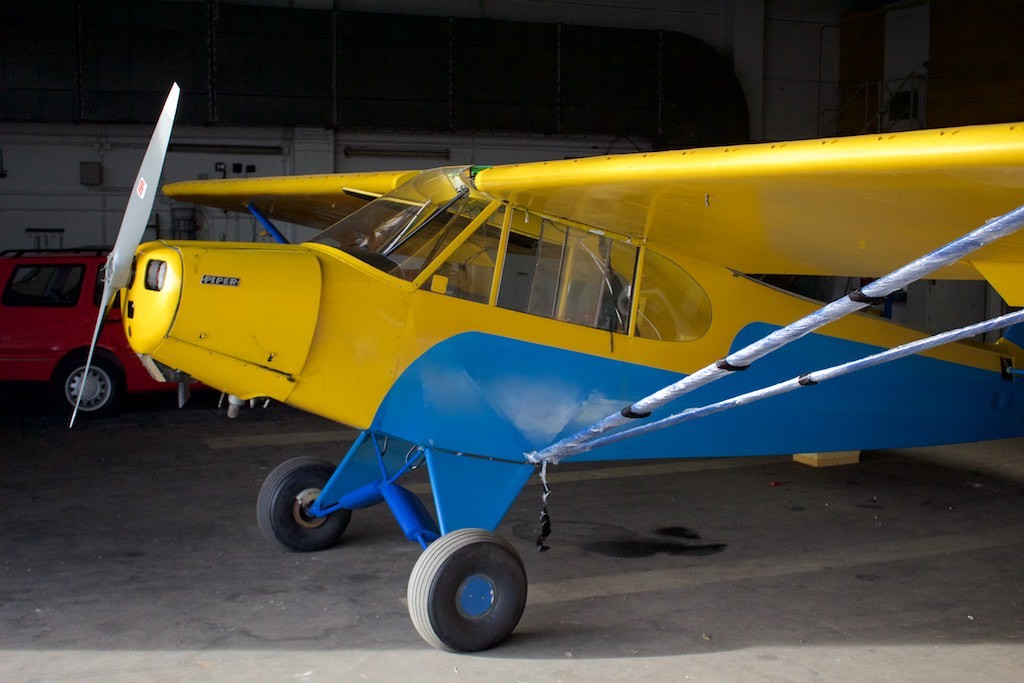 Stringers on, tail assembled. Note ferring strips at the wing root still off. 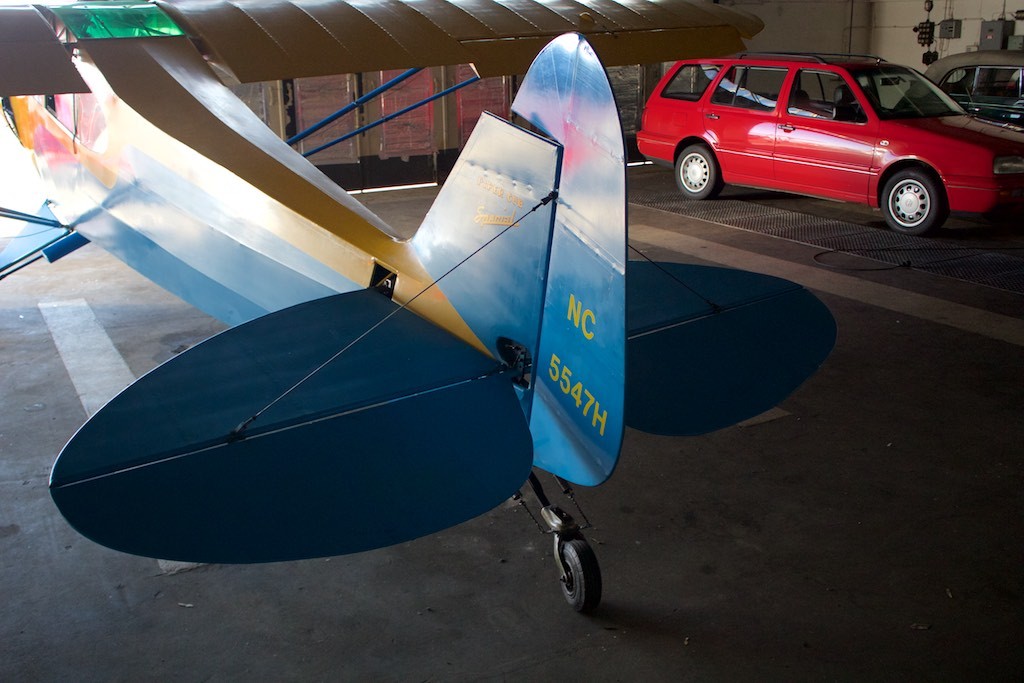 This is an important junction. 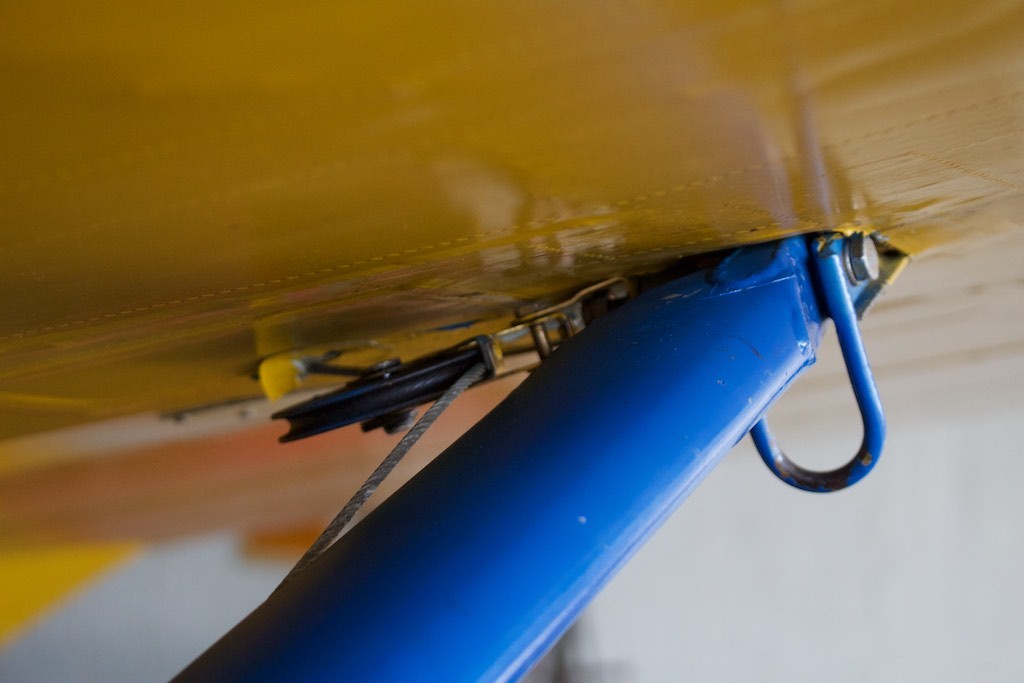 Aileron cables come into the rear area near the passenger. 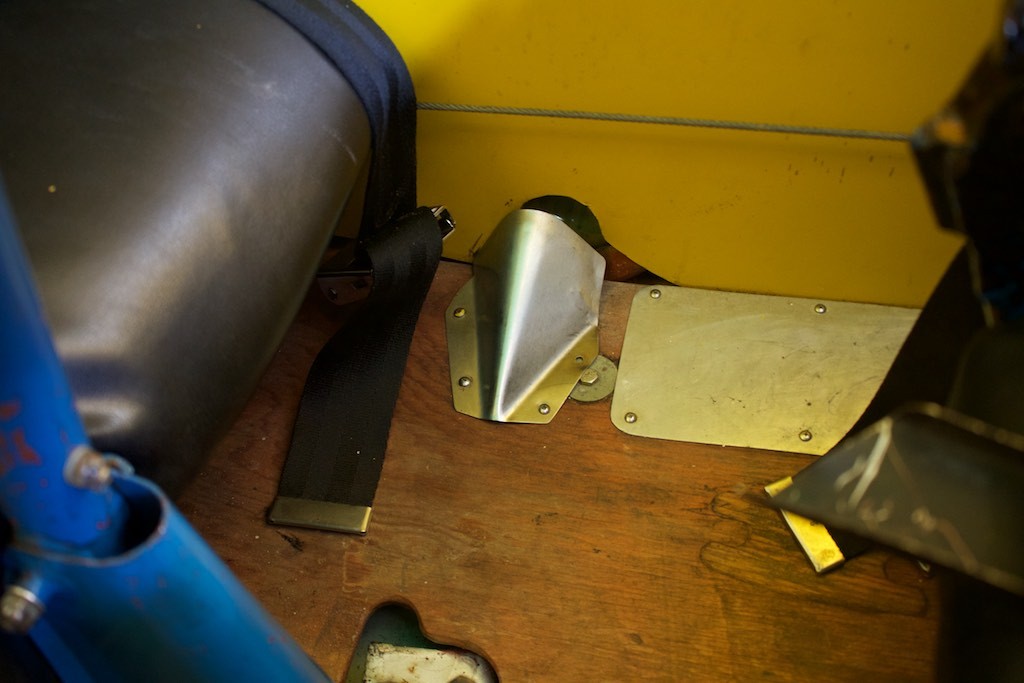 Dumping some avgas (which costs as much as gold here) into the tank. Not as ready to fly yet as she looks…. 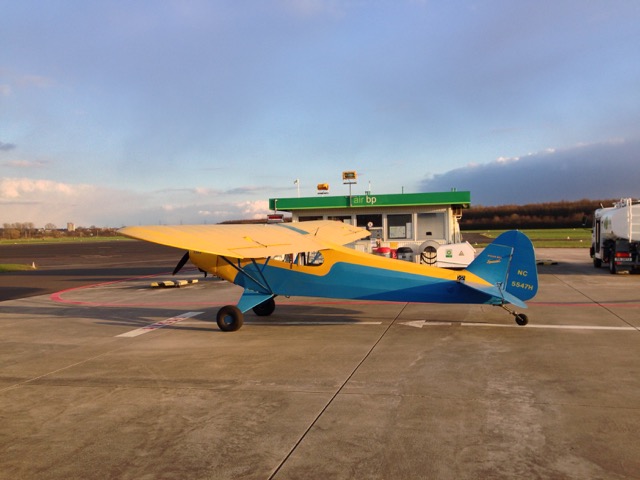